This story was published before war came to Ukraine and suspended all travel there. 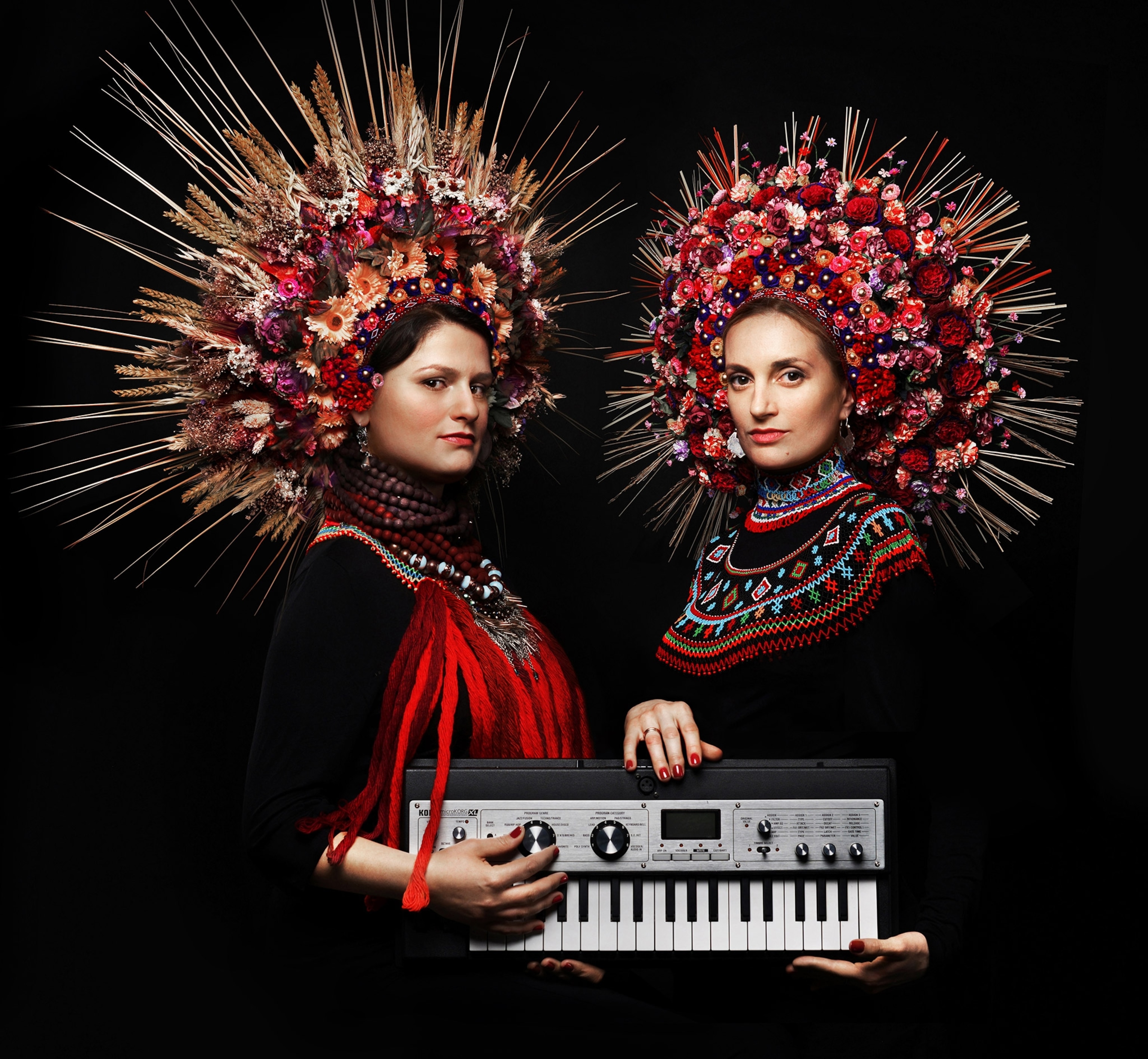 Summertime traditions feature the head-turning “vinok,” a classic accessory for weddings and festivals.

Photograph by Dominika Dyka
A version of this story appears in the December 2020 issue of National Geographic.

Flowers, feathers, hemp threads, shells, beads, even pieces of foil and wax–these are just a few of the items that Ukrainian artist Dominika Dyka weaves into her modern re-creations of the traditional Ukrainian vinok (wreath or crown).

Worn for centuries by girls and young women to symbolize purity and fertility—and a mainstay at festivals and weddings—the wreaths are believed to have pagan origins that predate the introduction of Christianity to the Eastern Slavic world in the 10th century. Today, however, they are part of a resurgence of traditional culture that Ukrainians are embracing in daily life—modernized with both a proud history and a bright future in mind.

The wreaths are a class­ic decoration for Ukraine’s Ivan Kupala celebrations in early July. Originally pagan, the ritual was long ago Christianized to incor­­­porate John (Ivan) the Baptist and is also celebrated in Russia, Poland, and Belarus. In addition to fire jumping, festivities include women creating wreaths from fresh flowers and plants. Each woman places her wreath in a river to divine her romantic future by its fate in the water’s flow (or by which man jumps in to save it). But these days the wreaths also make appearances at art and music festivals, in music videos, and as the crowning image of countless social media posts.

Something old, something new

Dyka’s versions—made with collaborators at her Third Rooster workshop in Lviv, Ukraine—are among the most extraordinary. (Third Rooster, she says, denotes the third cry of the rooster in the morning and the cleansing arrival of a new day). She bases the designs on newly digitized archival images from museums, as well as archival family photos sent to her creative group of stylists, makeup artists, and wreath masters.

“We use materials that we know have been used before.” The goal, she says, is to breathe new vibrancy into this discovered history, “to show the traditional clothing of Ukraine through modern photography and remove associations with the vintage, faded colors of old photos.” And no professional models “posing coldly and detachedly” wear her wreaths in photos. “Women are beautiful regardless of height, body parameters, and age, and we show this in our photographs,” says Dyka. Her goal is simple: to catapult the traditions of the past into a colorful explosion of art and national pride today. “There is a natural desire,” she says, “to show everyone this beauty.”

(Related: See striking photos of cultural fashions around the globe.)

In Carpatho-Ukraine, an autonomous region that existed from 1938 to 1939 within the Second Czechoslovak Republic, a young woman displays a floral wedding crown.

Lesya Kozenko models traditional clothing and jewelry from eastern Podolia, in the western part of Ukraine, including a wreath of wax flowers.

There is a strong demand for it. The wreaths, along with traditional clothing such as embroidered shirts and dresses, “are getting more and more popular” says Daga Gregorowicz, a member of the Ukrainian-Polish band DAGADANA and a proud exhibitor of Dyka’s creations. “For many years we looked for our performance look—we come from two neighboring countries, Poland and Ukraine, and our music blends traditional folk culture of both states as well as modern elements, such as jazz, electronica, rock, and improv.”

Then they saw Dyka’s creations. “Fate must have planned all of this for us long ago—to promote our culture around the world and to tell stories of women from our homeland,” says Gregorowicz. She says the outfits draw people’s attention to the richness of Poland and Ukraine at music festivals around the world: “This relatively little-known piece of the world very often seems exotic to viewers and has so much to offer.”

Within Ukraine, the wreath boom influences florists as well. One of them, Anastasia Prushko, founder of the Kyiv-based A Note on Flowers, says orders have included one for a baby on her christening, gifts to guests at birthday parties and at the opening of traditional Ukrainian restaurants, and accessories for fashion shows. She also teaches master classes and conducts weaving sessions with children.

Most of the demand, however, still comes from brides for their weddings. “These are especially in demand as a tribute to Ukrainian roots and traditions, and the wreaths almost always complement embroidered shirts and dresses,” says Prushko. Examples of those are the vyshyvankas (traditional embroidered shirts) made by well-known designers, such as Vita Kin, and by more traditional craftswomen “who are less famous but dear to the brides.”

(Related: Discover 10 of the world’s best destinations for blooms.)

Prushko insists on personal fittings for her wreaths. “You start with the ribbon and tie, so you know the volume of the wreath. The slope is important—how exactly will the wreath be dressed, in front, on the forehead, or more lowered in the back?”

But there is science, mysticism, and art as well: “You need to understand not only the symbolism of plants,” she says, but how they freeze, dry, and “behave without water.” Fresh plants feed on a glucose-soaked cotton ball that’s taped into the arrangement. Dried flowers are more fragile but can be attached with glue. A wreath must look relaxed but also be secure so the bride can dance freely. And, of course, Prushko explains: “The flowers should be densely arranged, as if squeezing each other’s shoulders for support.”

The arrangements by her and other artists may change, but their meaning is steeped in history. “The bride, a couple of days before the wedding, she cried,” recalls Prushko. “It was at that moment, as I wove a wreath, putting stems under the ribbon, that she realized she was getting married. It was a very touching moment.”

A symbol of national pride

Love and weddings aside, there is another element at play: patriotism.

Ukraine’s second uprising, in 2014—protests also aimed at asserting Ukrainian independence from Russian meddling—further rooted the trend. Ulyana Yavna, founder of the Traditional Clothing of Ukraine store in Lviv says the vintage look “became very popular after the [2014] Revolution of Dignity.” But she recalls the wreath, or vinok, beginning to play a role as early as the Orange Revolution, “when many women wore the vinok during protests like some symbol.”

Mayhill Fowler, associate professor of history at Stetson University and a specialist in the cultural history of Russia, Ukraine, and Eastern Europe, says that during the Soviet era there were allowances for local traditions. For example, each Soviet republic might have “an approved ethnic hat, shirt, or dance—but it was state-sponsored, from above.” The wreath, she says, was long associated with wedding traditions, but during the Soviet era most weddings were held in city buildings or civic locations. The message was to be part of the bigger political picture, not to celebrate local traditions. “You couldn’t go too far, you had to walk the line and not look anti-Soviet.”

(Related: Learn how to eat your way through Russia.)

Fast forward to today, when artists can explore all sorts of local traditions inspired by rural or folk motifs and update them for modern times. For example, Fowler says, “you might have hipster outfits but with some embroidery; if a vyshyvanka was previously just used for holidays, now it might be modern and sexier, and seen on a regular day in an urban street.” (Travelers who miss Ivan Kupala celebrations this July because of the pandemic could consider going for next year’s Vyshyvanka Day, to be celebrated on May 20.)

At music festivals, many attendees wear flower crowns in their hair while drinking beer and just hanging out. Fowler says the shop All Our Own, in Kyiv, has designers who share space to exhibit and sell their wares to locals looking to buy local. “People are finding out what is Ukrainian and celebrating it in the consumer sphere.” And they are “using folk motifs for contemporary expression.”

With her extraordinary wreaths, the artist Dyka is doing just that. Traditionally, wedding wreaths were worn only once. But with new, modern energy thoughtfully woven into each personalized piece, today’s wearers are ready to break some rules: “Married women,” says Dyka, “now love to wear wreaths, feeling young and beautiful.”

Eve Conant is a writer and editor at National Geographic. She lived and worked as a foreign correspondent for Newsweek in Moscow. Follow her on Twitter.