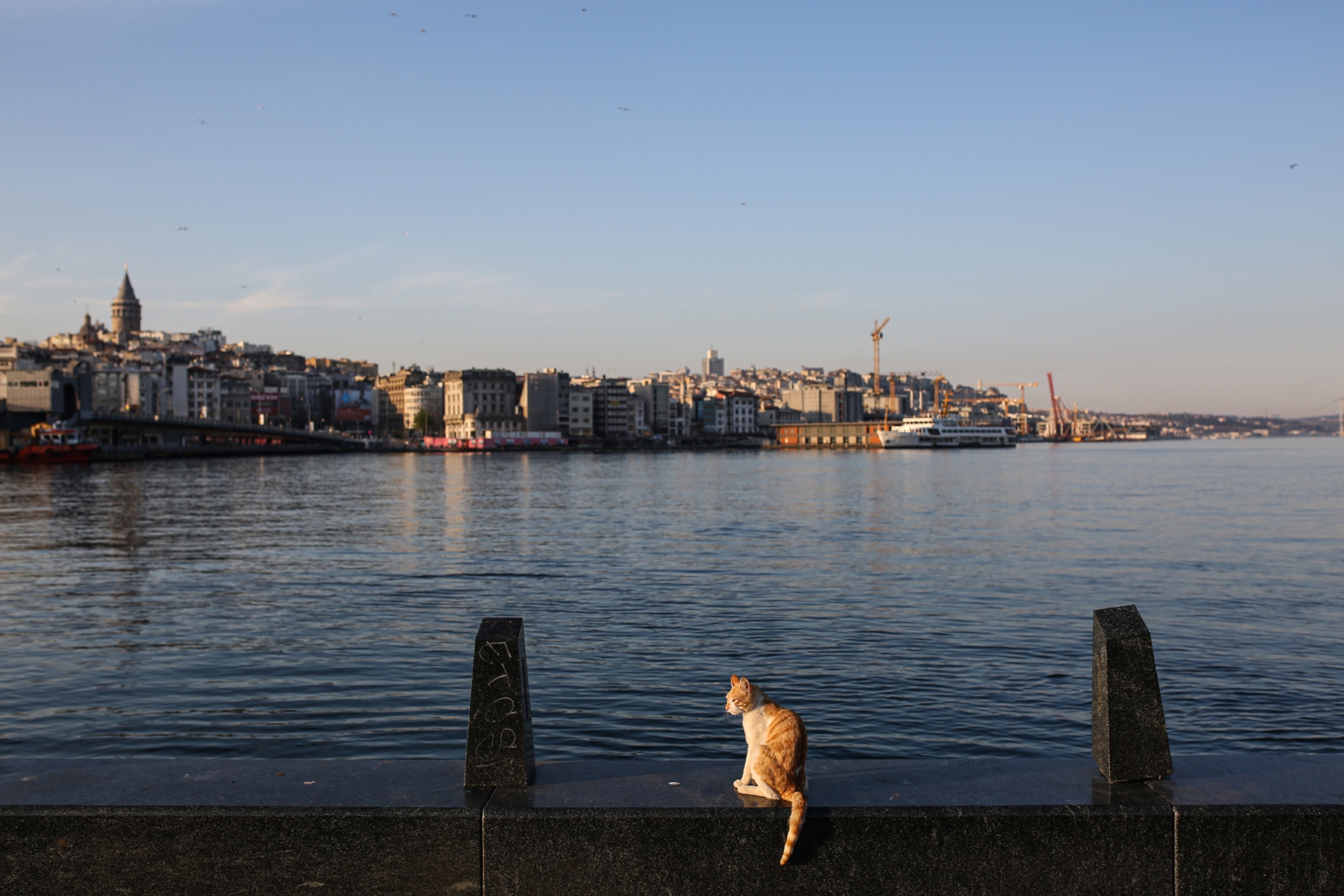 What happens to street animals when tourists suddenly disappear?

As coronavirus forced millions of people around the world into lockdown, another sizeable population had also been hard hit—stray cats and dogs.

A stray cat stands alone in Eminönü, one of Istanbul’s oldest neighborhoods, which remained nearly empty for months due to COVID-19 restrictions.
Photograph by Elif Ozturk, Anadolu Agency/Getty Images

The trip from the ferry dock to Cem Arslan’s home on Kınalıada is a short one, but it’s not just the steepness of the hilly streets that keeps him from zipping along more quickly. As he drives around this small island district of Istanbul, Arslan frequently slows his electric scooter to a crawl—either to let stray cats dart safely across the road or to greet a pack of dogs that knows him well.

Istanbul is famous for its street animals—especially its cats. They are the subjects of documentary films, viral videos, popular Instagram accounts, and countless tourist snapshots. They linger outside butcher shops, fishmongers, and sidewalk restaurants; perch photogenically on historical landmarks; and snooze amidst the wares at local stores. But what visitors typically see is only part of the sometimes harsh reality for the city’s estimated 400,000 to 600,000 strays.

“When I first moved to Kınalıada, I saw a lot of cats and dogs wandering around looking for food in the winter,” says Arslan, who set up the Empathy Association to help the island’s approximately 1,000 stray cats and 200 dogs. (His own household includes one sweet-natured former street dog and three fluffy cats.) As a popular vacation getaway, Kınalıada bustles in summer with some 30,000 people, a figure that plummets in the off-season to around 300. In bad weather, ferry services can be canceled to the mainland, the closest source of veterinary services.

How stray cats and dogs fare when the sources of food and care they depend on disappear became a globally relevant issue this past year. As the coronavirus pandemic forced cities into lockdown and tourism to a grinding halt, life was thrown into tumult not only for the world’s people but for its tens of millions of street animals as well.

Cats on the prowl

Like Istanbul, the medieval old town of Kotor, Montenegro, is well-known for its stray cats; there’s even a Cat Museum here. Worldwide, sights that are popular with visitors are often favored by animals, too, whether it’s the traditional marketplaces that serve as a source of scraps, or the ancient ruins, green parks, and historic quarters where cats and dogs can find respite and shelter in busy, overbuilt cities. The impacts of the loss of tourism in many of these places were felt almost immediately.

“Within days after the government shut down restaurants, the big garbage bins where a lot of animals scavenged food were empty,” says April Lynn King, a volunteer and board member of Kotor Kitties, a charity helping street animals in Montenegro. “People were writing to us saying that the cats in their neighborhoods were just howling with hunger.”

The loss of tourism income had an indirect effect on animals as well. “Whole towns in Bali, for example, shut down as people who were out of work left to go back home,” says Katherine Polak, a veterinarian and the head of stray animal care for Southeast Asia at Four Paws International. Those who remain often struggle to feed their own pets, much less strays. Rates of pet abandonment have reportedly soared in many places due to economic woes, as well as unfounded fears of COVID-19 transmission through animals.

JERUSALEM'S STRAYS AND THEIR UNSUNG GUARDIAN

March 16, 2017 - Stray cats are found everywhere in the Old City of Jerusalem. Their overpopulation threatens the well-being of these felines, leaving them susceptible to disease, neglect and starvation. However, one resident has made it her mission to look after Jerusalem's strays and to give them the best life possible. Tova Saul has devoted an enormous amount of time and money to feed and rescue stray cats. In 2016 alone, she spent close to $15,000 USD to trap, spay, and release 76 cats, rescue and place 48 kittens in homes, and provide medical care for 28 sick cats and kittens. As an observant Jew and animal lover, she is driven by a duty to stop the suffering of all animals, a concept she feels is not entirely observed by others of her faith. Follow Saul as she ventures throughout the city, including Jewish and Muslim neighborhoods, to feed cats and trap them for spaying and to educate curious onlookers of all religions. Learn more about Tova Saul's work in Jerusalem.Read the article, "Vasectomies Could Cut Feral Cat Population."

More animals on the streets and fewer people to shoo them away meant more chances to mate, further increasing populations at a time when many spay/neuter and adoption programs had to be suspended or limited due to social-distancing measures or budget crunches. Meanwhile, many animals ventured outside their regular haunts in search of new food sources, bringing them into conflict with other packs of strays that had already claimed the territory, with unfriendly or even malicious humans, and with cars.

“Hungry cats in Athens became much bolder about crossing roads, a fatal combination with the higher speeds at which the much-reduced traffic circulated in lockdown,” says Cordelia Madden-Kanellopoulou, co-founder of the charity Nine Lives Greece, whose volunteers feed more than 1,000 cats—“a tiny fraction of the population”—in the city.

(Discover how Istanbul was muted by the pandemic.)

With fewer caring eyes on the street, injured or sick animals are less likely to be reported to the charities and municipality services that could help them. Ahmet Ali Yağcı, the head veterinarian at a new city-run hospital and rehabilitation center for strays located on the outskirts of Istanbul, says his staff has been receiving half the number of citizen reports they did pre-pandemic.

Tourists and residents in many cities play a big role in reporting dogs and cats that need assistance. They also establish, volunteer with, and donate to the work of street-animal charities, and sometimes go to great lengths to fly a newly adopted stray home with them. The pandemic interrupted these forms of support, leaving many local organizations scrambling for funds. This emphasized the importance of educational outreach and medical interventions like sterilization programs, which create longer-term solutions.

(See the lives of street cats around the world.)

Tourism isn’t always beneficial to street animals, however. “In one of the hill stations in India where we worked, locals would keep puppies outside their homes in baskets to sell to tourists,” says Keren Nazareth of Humane Society International. Since stray dogs had produced the puppies—and a source of income—she explains, “people wouldn’t let us take them in to be sterilized or get vaccinations, and we don’t know what happens to those puppies.” In other places, poisoning animals ahead of tourism seasons is a way of “cleaning up” an area for visitors who might be put off by strays.

As it has in so many other ways, the coronavirus pandemic has highlighted the existing vulnerability of street animals. For every well-loved café cat that happily snuggles on visitors’ laps, hundreds if not thousands of other strays in the same city likely lead lives diminished by disease, abuse, and accidents. Cute photos and charming travel stories about ubiquitous cats and dogs obscure the fact that many of these populations are too large to be healthy. And street animals can’t survive off Instagram likes.

“Cats are big business in Kotor—every little tourist shop is filled with cat stuff, but almost none of the money goes to help cats,” King says. “We’re trying to encourage the idea that these animals should be taken care of as part of the city’s cultural treasure.”

HOW YOU CAN HELP

There are ways travelers can use their trip for good once tourism resumes. Nine Lives Greece normally leads free daily tours of the cat colonies it feeds in Athens, combining a walk through the historic city center with a side of feline affection. One of the most popular activities in Phuket, an island in southern Thailand, has been a trip to the Soi Dog Foundation, where visitors can tour their animal rescue center and even play with or walk some of the pups.