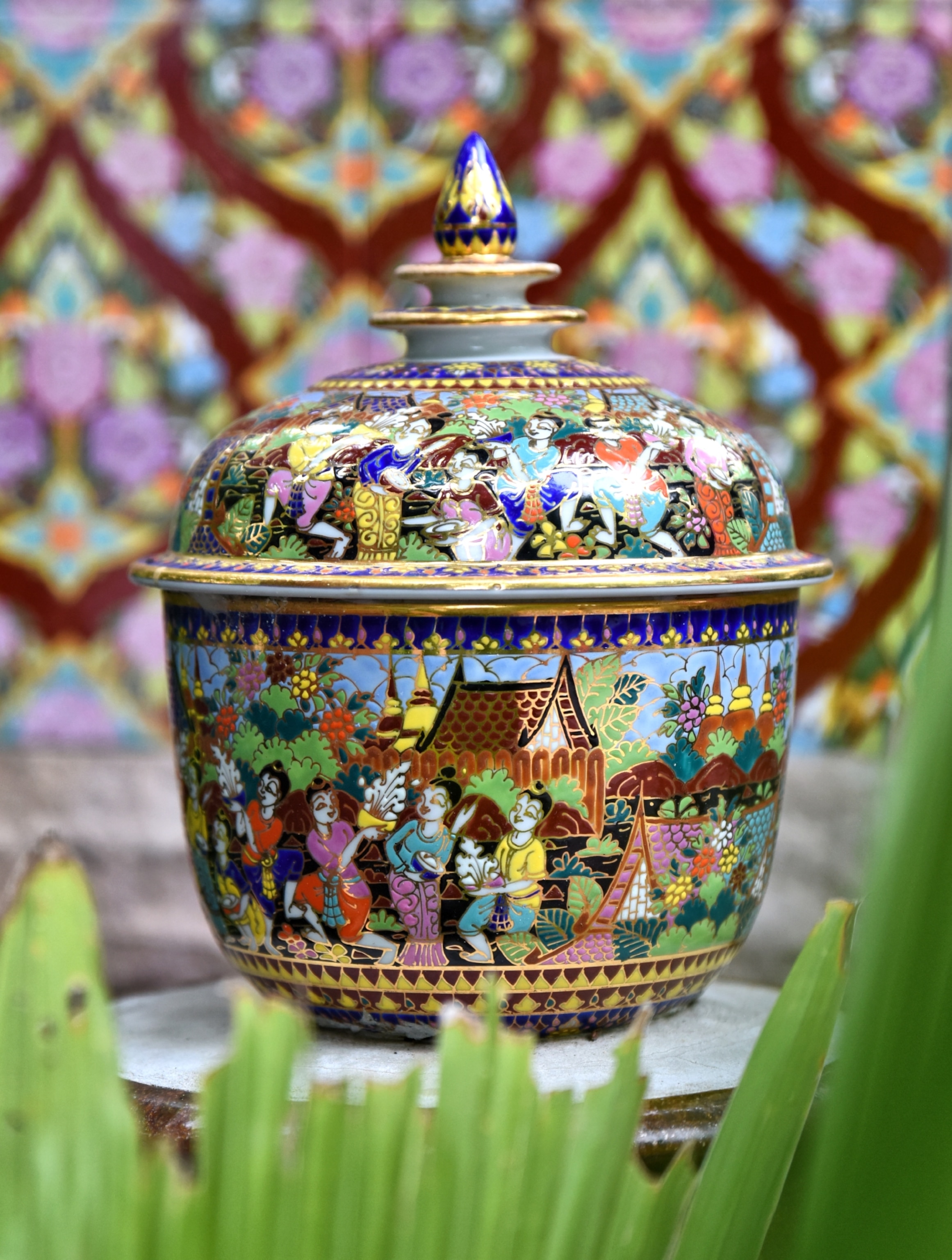 Few tourists to Bangkok know that the glimmer of the iconic Wat Arun temple is thanks to the same magnificent Thai porcelain that decorates five-star hotel lobbies or serves as dinnerware in high-end Bangkok restaurants.

In the early 1900s, mosaics made of benjarong shards began embellishing many of the city’s most important Buddhist temples. Benjarong also started becoming more widely produced and accessible to the public. But it soon fell out of favor, and porcelain production eventually ceased.

It would now exist only as an antiquity if not for a village that, in the 1980s, saw an opportunity to revive the art form. Located about 19 miles west of Bangkok, Don Kai Dee has grown to become what Atthasit Sukkham, assistant curator of the Southeast Asian Ceramics Museum at Bangkok University, describes as the sole source of authentic benjarong.

Now in the midst of a new fight for survival as a result of pandemic lockdowns, the village’s community of about a hundred artists is once again looking forward to showcasing its rare skills to the world. As of November 1, vaccinated travelers can visit Thailand quarantine-free, where they can buy benjarong from the artists at Don Kai Dee, learn the history of Thai ceramics at Bangkok’s Southeast Asian Ceramics Museum (reopening in December), and admire the exquisite benjarong decorations in the Thai capital’s Grand Palace.

Don Kai Dee is continuing a tradition that originally stemmed from the close relationship between China and Thailand, says Sukkham.

“[Benjarong] began as an import during the late period of Thailand’s Ayutthaya Kingdom [1350-1767],” Sukkham says. “The early benjarong was ordered by the Thai royal family from China. It was made in southern China and it had Chinese designs.”

(Why are visitors to a temple in southern Thailand donating chicken statues?)

During the reign of King Rama V (1868-1910), blank white ceramics were imported from China and hand-painted in Thailand with local designs. In the early 1900s, the king issued an order making benjarong more widely available, rather than the preserve of the upper class. Soon, benjarong studios sprouted across Thailand. But when King Rama V died in 1910, so too did the momentum behind benjarong, Sukkham says. Within 20 years, it was no longer being produced. The why remains a mystery. “No records mentioned the disappearance [of benjarong] or the reason,” Sukkham says.

It took the 1982 closure of a ceramics factory near Bangkok to resuscitate this royal craft. Urai Tangaeum was one of dozens of Thai artists made redundant when that workplace closed in Samut Sakhon province, where Don Kai Dee is also located. Many tourists drive through this quiet Thai region, best known for its fishing and rice farming industries, en route from Bangkok to the popular seaside resort of Hua Hin.

Instead of wallowing in her misfortune, Tangaeum recounts, she decided to take a risk. After studying benjarong designs, she began painting them on plain ceramics sourced from factories. When it became apparent Thai buyers appreciated this forgotten product, she bought her own kiln. Slowly, Tangaeum created a start-to-finish benjarong studio at Don Kai Dee. Nearly 40 years later, this has become a co-operative where dozens of potters share skills and knowledge.

(Thailand’s captive elephants face a crisis after a year without tourism.)

During tours of Don Kai Dee led by senior workers, tourists to the village learn that each benjarong item is crafted using a nine-step process involving up to four different artists. It begins with soils from three Thai provinces. When mixed together they provide the perfect blend of plasticity, heat absorption, and white-color finish.

After being shaped on a pottery wheel, the benjarong item is set in an electric kiln for 10 hours at 1472°F (800°C). Once it cools, the item is coated with a glaze and baked for another 10 hours at an even higher temperature, until it gleams.

The next step is benjarong’s trademark. Artists paint designs with liquid gold, which costs $5,000 per liter, according to Tangaeum’s daughter, Nippawan. This gilding is executed only by veteran workers, who have 20-plus years’ experience in a profession which some artists can continue well into their 60s.

Finally, another worker traces around the golden lines with colored paints, then a supervisor inspects the piece. The process finishes with another blast in the oven. It takes three to four days to produce a benjarong cup, dish, or plate, which go for at least $30 each. That time frame extends to two weeks for the largest vases, which can be up to six feet tall and cost as much as $10,000.

Some wealthy clients request tailor-made designs. Otherwise, Don Kai Dee’s artists focus on the most common benjarong patterns, Nippawan Tangaeum says. These include the Thep Phanom, a Buddhist motif which decorates temples across Thailand and depicts a deity clasping their hands together at their chest in respect to Buddha.

Prior to the pandemic, Don Kai Dee’s artists received hundreds of tourists a week, who joined benjarong workshops, went on village tours, and bought ceramics, says villager Prapasri Pongmatha. “We have had nearly zero overseas tourists during the pandemic, only a few Thai visitors,” says the 60-year-old Pongmatha, who has been making benjarong for 34 years. “But we didn’t give up. We love our art. It gives us a focus so we can forget pandemic problems.”

(Here's how Thailand prevented coronavirus from gaining a foothold.)

While shops across Thailand sell mass-produced, cheaper versions of benjarong, Don Kai Dee is the only source of authentic, traditional benjarong, according to ceramics expert Sukkham. At Don Kai Dee, tourists can purchase ready-made items and have them personalized on site, or order custom artworks to be shipped to their homes.

The village does not have a website, with most of its sales done in person at the village, or via art dealers who facilitate purchases for rich clients, Pongmatha says. Some of these buyers pay up to $30,000 for particularly intricate, gold-laden dining sets.

The expense of benjarong reflects the painstaking intricacy of its crafting. It requires poise and persistence to scrawl precise benjarong designs for hour after hour. It is those attributes, above all, that decide whether a benjarong student can become a master.

“We have many young people who come to the village to learn benjarong, but most don’t last,” Pongmatha says. “They have enough skill, but not the patience. Making benjarong can make you crazy if you aren’t patient. But if you are patient enough, it is very soothing, nearly like meditating.”

The humble incomes earned by Benjarong artists also deter young Thai people from learning this craft, according to her daughter, Supawan Pongmatha. The 39-year-old says she loves making these ceramics. But she does so only in her spare time, having decided to instead become an art teacher, a more stable job with a higher salary. “Young people want to make money, to feel they have a safe job with a good future,” Supawan says. “Being a benjarong artist is not as reliable.”

Without a robust new generation of craftspeople making benjarong, its future is uncertain, the villagers agree. Forty years ago, benjarong was a relic. Having slowly roused this artform out of hibernation, the artists of Don Kai Dee are now fiercely trying to keep it awake.

Ronan O’Connell is an Australian freelance journalist and photographer based in Ireland and Thailand.