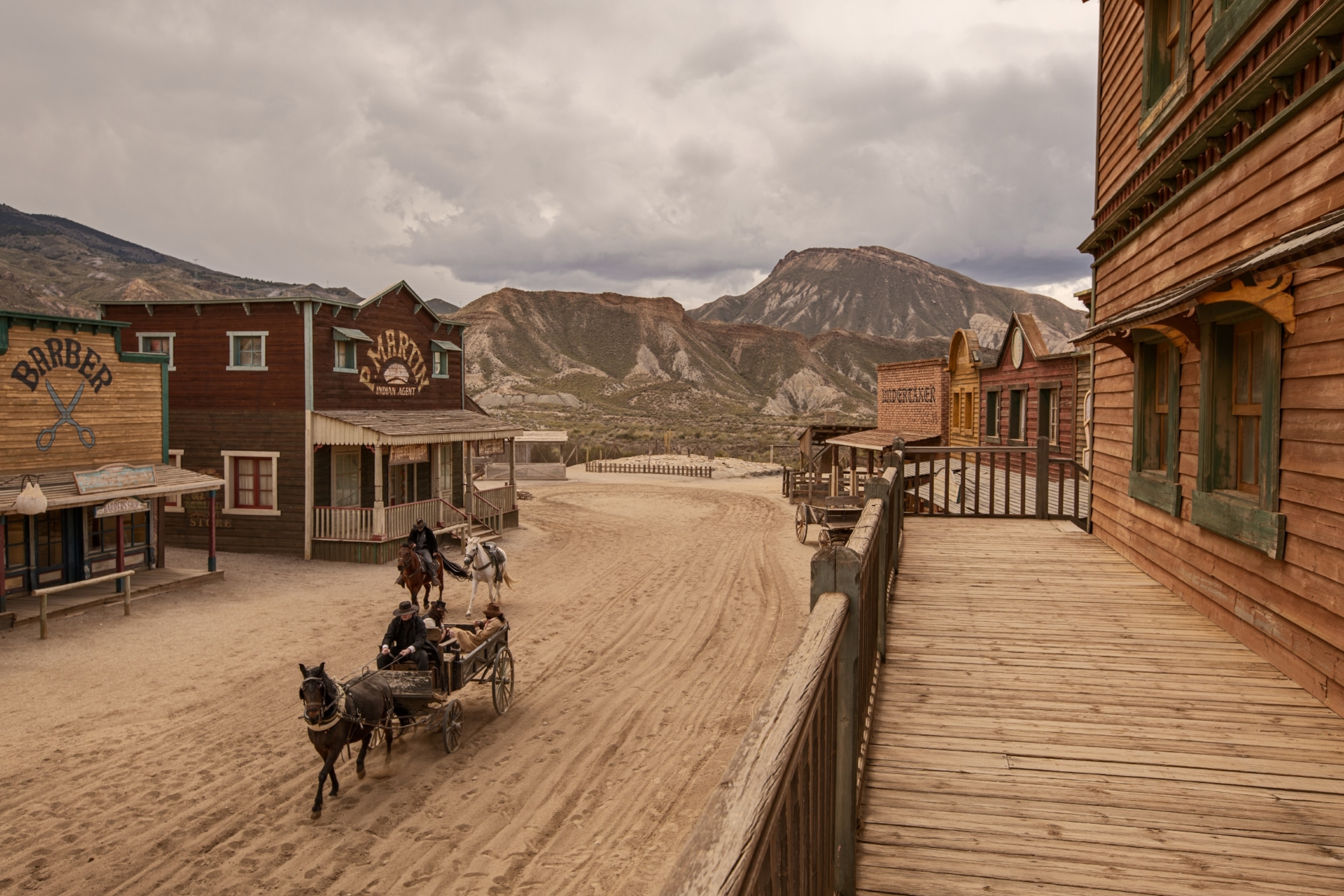 The Wild West lives on in southern Spain

Stuntmen ride horses and drive carriages at Oasys MiniHollywood, one of several Western film sets in Spain’s Almería region. The area’s deserts and canyons have attracted movie and TV crews since the 1950s. Today, their faux Old West towns are also open for cowboy shows and tours.
Photographs by Matilde Gattoni

The worn wooden floorboards squeak under Rafael Molina’s heavy steps as he paces the saloon. Outside, the sound of galloping horses breaks the silence of the surrounding desert. All around him, the Old West town’s empty shops and abandoned houses look as if they have just been ransacked by cowboy bandits.

“When I was a kid, I could only dream about all this,” says the 68-year-old former actor and stuntman. “My aspiration was to see a film set firsthand. Today I own one of the most famous ones in the history of Western movies.”

Molina bought the set, called Fort Bravo, at the end of the 1970s. But this busy movie site is located in Spain—not Montana or Texas. It’s one of three faux Old Western towns in the small village of Tabernas and the surrounding desert of the Almería province. Since the late 1950s, these rugged mountains, arid plains, and dry canyons have provided the backdrops for more than 170 movie Westerns, including The Good, the Bad and the Ugly (1966) and Once Upon a Time in The West (1968).

Other movies and TV series were filmed at Tabernas, including Indiana Jones and Game of Thrones. But this windswept region—a 30-minute drive north of the coastal city of Almería—remains synonymous with Western shootouts.

These days, it’s a lure not only for neo-Western film directors, but also for travelers wanting to sink their spurs into its lore and landscapes. Here’s the unlikely story of how so many movies set in a near-mythological region of the United States ended up being filmed in southern Spain. We also share how travelers can experience the cinematic landscapes and the fascinating people bringing the Old West to life.

A community of cowboys

Molina belongs to a small community of local cowboy actors and stuntmen in Tabernas who have played a role in movies and TV shows since the first productions in the 1950s. They can perform anything from fistfights to horse drags. Knowledge and skills often pass from father to son, keeping tricks of the trade in the family. Steeped in the golden era of Westerns, these actors embody the values of their movie heroes: pride, bravado, freedom, and a trusting relationship with horses.

“I’ve always liked horses and the [U.S.] West,” says 29-year-old Ricardo Cruz Fernández, a stuntman and cowboy who appeared in recent productions including Game of Thrones and The Sisters Brothers, a 2018 Franco-American Western starring Joaquin Phoenix. Fernández started his career as a cowboy after completing a stuntman course a decade ago.

(This Nevada festival celebrates the rhymes and good times of cowboy poetry.)

Between productions, he performs daily shows at Fort Bravo for thousands of tourists who visit the set each year. In one show, Fernández portrays a bank robber who absconds with some gold. Visitors encounter him in the saloon, fist and (fake) gun fighting with actors playing his double-crossing accomplices. The town also offers cancan dance shows and set tours by horse-drawn wagon.

“I prefer to play the bad guy, because it gives me a wider range of possibilities,” says Fernández. “The good guy only has to keep things in order.”

His romance with the Wild West started when, as a kid, he saw Italian director Sergio Leone’s so-called “Dollars Trilogy.” The trio of films—A Fistful of Dollars; For a Few Dollars More; The Good, the Bad and the Ugly—were shot during the 1960s in the Almería region. They starred a young, still-unknown Clint Eastwood as a poncho-wearing cowboy with no name.

“Leone’s movies didn’t need much dialogue or intricate plots,” says Fernández. “The actors’ gestures, the music, and the little details are enough to give you goosebumps.” Leone’s innovative shooting style and captivating soundtracks in the Trilogy paved the way for the so-called “spaghetti Western,” a popular film genre in the 1960s and 1970s. Most of its directors were Italians, while producers and actors were a mix of Italians, Spaniards, and Americans, all speaking their own languages onscreen.

Snubbed by U.S. critics at first, spaghetti Westerns became hugely successful due to the disenchanted vision they brought to a film style that had almost disappeared. The Wild West figures they depicted were a far cry from the heroic white conquerors of earlier epics. Their main characters were not champions of the defenseless, but amoral bounty hunters moved by personal profit, greed, and vengeance. Actions and violence ruled; the good rarely triumphed.

Although Almería had already been used as a shooting venue for a few renowned movies (Lawrence of Arabia, Cleopatra), it was Leone, and the ensuing flurry of European Westerns, that finally brought the province’s stunning landscapes into the international spotlight.

Since then, Almería has hosted more than 500 productions, including blockbuster films (Patton, Terminator: Dark Fate) and TV shows (Doctor Who). “Our landscapes are very convenient. We have sea, desert, and snowy mountains all within a short distance,” says local producer Plácido Martínez. “We can serve as Texas, New Mexico, Arizona, California, and endless other natural settings.”

When foreign Western productions discovered Almería in the 1960s, the province was one of the poorest in Spain, plagued by high unemployment and emigration. Despite its remoteness, production costs were extremely low and its inhabitants were skilled horsemen. They were ideal stuntmen and extras for spaghetti Westerns set on the border between the U.S. and Mexico.

“I was earning more money in one day than my father did in one week of hard labor in the gold mines,” says Manuel Hernández Montoya, a 61-year-old local who worked as an extra in several Westerns as a child. He now owns the cinema-themed hotel and restaurant Hostal Alba in the nearby village of Los Albaricoques, where the final duel of For a Few Dollars More was shot.

For a Fistful of Dollars was a huge success, spurring the construction of two open-air Western sets around Tabernas. (Called Oasys Mini-Hollywood and Western Leone, both are still used. When film crews aren’t around, they welcome tourists to their dusty streets and 19th century-style buildings with cowboy shows, tours, and horseback rides.)

The region had few paved roads at that time, and the cinema industry was instrumental in building Almería’s airport and first hotels. In just a few years, the town turned from a backwater into a sort of European Hollywood, with celebrities including Claudia Cardinale, the Beatles, and Charles Bronson sipping drinks by the Gran Hotel pool between scenes.

(In Texas, a new battle brews over how to remember the Alamo.)

The movie industry also boosted the international image of Francisco Franco, the dictator who ruled Spain from 1939 to 1975. “The regime was very happy to welcome celebrities such as Ava Gardner, Frank Sinatra, or John Wayne,” says Evaristo Martínez, an Almería-based journalist and cinema expert. “Franco would facilitate international productions in any way, even those whose movies were censored locally.”

The spaghetti Western genre declined at the end of the 1970s due to a glut of productions, a sustained dip in quality, and the shifting interests of the public. A blow for the local cinema industry, this resulted in the loss of thousands of jobs and Western sets falling into disrepair. Abandoned by their owners, the sets were kept up by a few stuntmen offering tourist shows to make ends meet. When Molina bought Fort Bravo for $6,000, its bank, shops, and saloon were in ruins and had to be rebuilt.

After a few big productions in the 1980s—including Indiana Jones and the Last Crusade and Conan the Barbarian—Almería’s cinema industry picked up again. Westerns haven’t regained the prominence of the golden years, but locals still feel deeply bound to them. “Western movies have definitely changed the fate of our province, from the 1950s up until now,” says Martínez, the producer.

Besides visiting the three sets, tourists can two-step into Almería’s movie industry during the Almería Western Film Festival, held in Tabernas every October. Thousands of fans attend movie screenings, dress up like gunslingers, and sample Western-style cuisine.

(In Patagonia, cowboys guide travelers through a wild land.)

The town also has several tour agencies offering trips to abandoned sets in the desert, through the remote canyons and mountains where movies were shot. “I once had a tourist who came all the way from Japan just to take selfies in every location of the ‘Trilogy,’ wearing a replica of Clint Eastwood’s poncho,” says Cristina Serena Seguí, manager of the Malcaminos tour agency.

Some might suggest it’s the inscrutability of steely eyed cowboys and desolate landscapes that keep the tourists and film crews coming to the region. But Martínez spins a more aspirational narrative. “Western movies tell the creation of a country and a society from scratch,” he says. “They represent the history of mankind.”

Matteo Fagotto is an Italian journalist (and cofounder of Tandem Reportages) who focuses on social, environmental, and human rights issues. Follow him on Twitter.