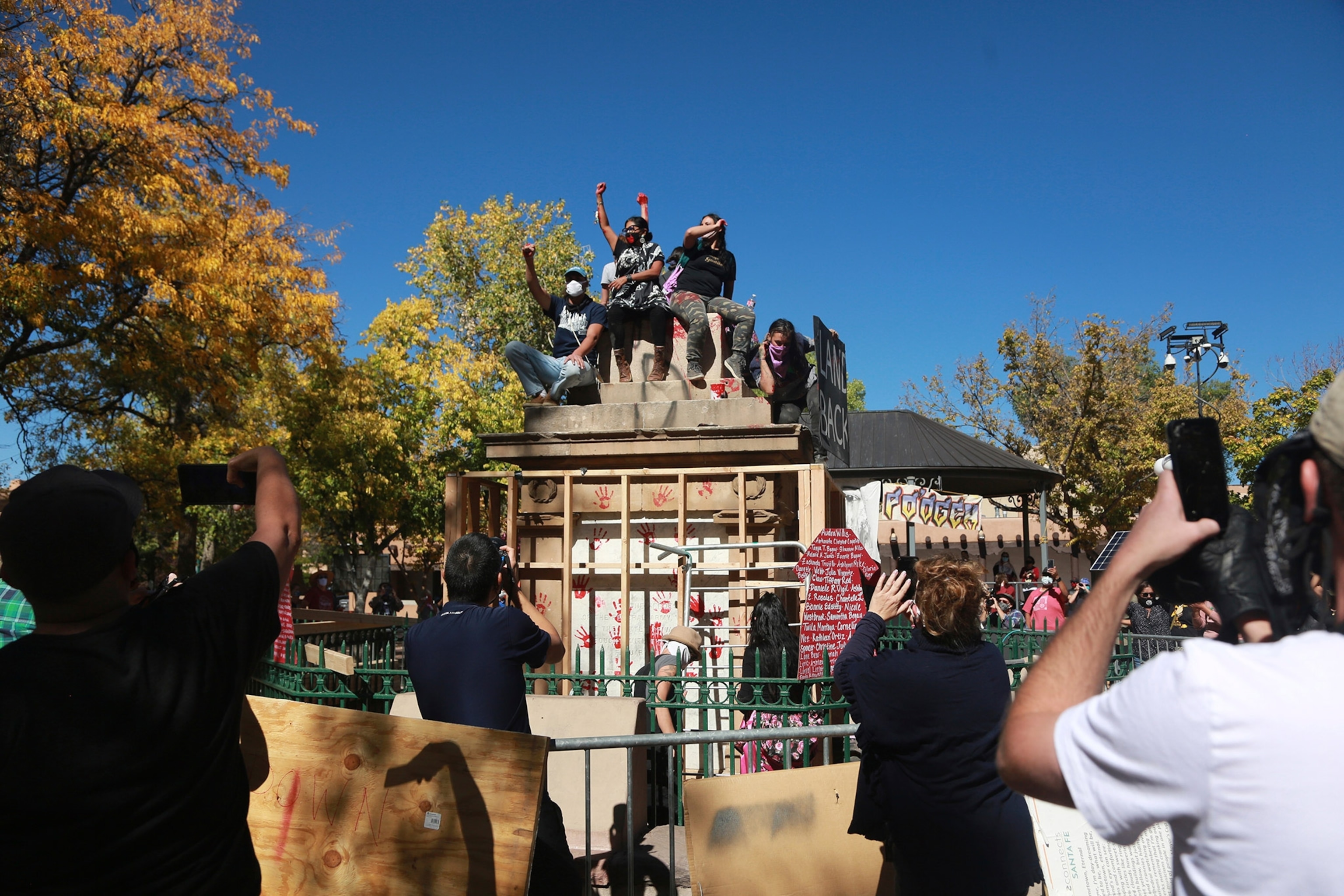 A decades-long fight to honor Pueblo Nations history is spurring an arts movement and a return to ancestral knowledge.

Demonstrators celebrate the toppling of the Soldier’s Monument obelisk on Oct. 12, 2020, in Santa Fe, New Mexico. Indigenous communities in the state have long considered the tribute offensive because it commemorates federal soldiers who fought Pueblo Nations people in the 19th century.

Since 1868, a 20-foot-tall obelisk commemorating Civil War Union soldiers has stood at the center of Santa Fe Plaza. The words etched in marble at the memorial’s base originally read: “To the heroes who have fallen in various battles with savage Indians in the Territory of New Mexico”—but the word “savage” had been scratched off in years past. Now, the monument itself no longer stands.

Memorials and monuments to New Mexico’s Spanish and American colonial past—depicting conquerors and missionaries cast in bronze or carved in stone—can be found throughout the state. But, just as Confederate monuments were felled last summer by Black Lives Matter activists, dozens of statues memorializing anti-Indigenous genocidal conquest have also been toppled—from Portland to Chicago to Richmond.

(As monuments fall, how does the world reckon with a racist past?)

Santa Fe, in particular, has been reckoning with its colonial past and current real-life violence against Indigenous peoples. An ongoing conflict over monuments is among the more visible actions playing out, but it is not the only one. Amid a struggle for racial justice, a number of organizations have pushed for change on issues such as water and land rights, police brutality, inequities in healthcare and community investment, and systemic racism.

These organizations are making urgent progress at a critical time, when the ongoing coronavirus pandemic has closed most, if not all, Native American tribal lands to non-residents.

Nineteen Pueblo Nations are scattered in central and northern New Mexico, each a sovereign nation. Their current lands were granted during Spanish colonial rule and then recognized under the 1848 Treaty of Guadalupe-Hidalgo when the United States seized the Southwest from Mexico. Here, resistance to Spanish and American colonialism runs centuries deep.

(Here’s why Pueblo Nations are among Nat Geo Travel’s 25 destinations on the rise.)

The toppling of the Soldiers’ Monument in Santa Fe Plaza is just the latest flashpoint in a long struggle. In a promising sign, President-elect Joe Biden’s nomination of Representative Deb Haaland (D-NM)—a member of Laguna Pueblo—as Secretary of the Interior points to the success of tribal action in boosting political leadership.

On October 12, 2020, hundreds gathered around the obelisk in historic Santa Fe Plaza to celebrate Indigenous Peoples’ Day. Chants of “take it down!” came from the crowd.

By day’s end, chains had fractured the structure in two, and police had charged six people with “unlawful assembly” and crimes related to pulling down the memorial.

(What role do tourists play in the future of Confederate monuments?)

Earlier, in June, under pressure from Indigenous activists, Santa Fe Mayor Alan Webber had pledged to take down colonial monuments such as the obelisk. Yet, by Indigenous Peoples’ Day, the obelisk—as well as another in front of the federal courthouse in honor of frontiersman Kit Carson, who led military campaigns against Natives—still stood. (A statue of Spanish conquistador Don Diego de Vargas, in Cathedral Park, had been removed by the city on June 18 for “safekeeping.”)

“They care more about monuments, colonial monuments of conquest, than they do about the people of Santa Fe—well, at least the Indigenous people,” said Christina Castro, who is Jemez Pueblo and Taos Pueblo. She is co-founder of Three Sisters Collective, an Indigenous arts and activism-focused group.

“People are tired of these broken promises and broken treaties and telling us one thing and doing the complete opposite,” said Melissa Rose, a Three Sisters Collective member and a midwife who is St. Regis Mohawk Nation from upstate New York.

In 1540, Spanish conquistadors and enslaved Native people traveled north, arriving in what is now the Southwest region to claim Indigenous and Pueblo lands for the Spanish crown.

Throughout this period, the Pueblo villages defied forced religious conversion as their holy medicine men and leaders were targeted for arrest, imprisonment, and even execution by order of the colonial governor in Santa Fe. Catholic churches were built atop sacred or ceremonial sites.

A smiling Pueblo mother carries a child wrapped in a woven blanket papoose on her back, sometime in the 1930s.

A Zuni Pueblo village in New Mexico, circa 1948. Pueblo Nations communities have fought for centuries to preserve their cultural traditions and maintain sovereignty.

For years, the Spanish fought against Acoma Pueblo, which was a stronghold, until Don Juan de Oñate laid siege in 1599, killing as many as a thousand Acoma people. In 1668, a holy man from Ohkay Owingeh Pueblo named Po’pay began to form alliances with the other villages to rise against Spanish rule.

Finally, in 1680, the Pueblos overthrew the Spanish in New Mexico in what is known as the Pueblo Revolt, led by Po’pay. The Pueblos lived free from Spanish rule for 12 years.

In the footsteps of Po’pay

After the Spanish retook the city, the Spanish Governor Don Diego De Vargas captured and executed 70 Pueblo warriors in Santa Fe Plaza. “A lot of blood was spilled on that plaza, but you have to go to a university history class to learn about it, because they won’t teach that in high school,” said Enrique Lamadrid, professor emeritus of Spanish at the University of New Mexico. “Real history is too terrifying.”

But that’s not the only legacy. Once the Spanish were defeated in the revolt, the Pueblos set in motion a revival of traditions and languages, which they continue to guard to this day. In 1980, the Pueblos celebrated the tricentennial anniversary of the Pueblo Revolt, culminating in a reenactment of Pueblo messengers who ran from village to village, informing each to initiate their uprising. Today, numerous Indigenous organizations like Pueblo Action Alliance and Red Nation fight for water and land rights, and against police brutality.

Amid this struggle for racial justice in New Mexico, the Santa Fe-based Three Sisters Collective formed in 2017 to support Pueblo artists, create space for Indigenous peoples in Santa Fe, and reclaim ancestral knowledge.

During the coronavirus pandemic, the collective has been organizing webinars on controversial neighborhood developments, art projects, even discussions on relationship boundaries.

In July, Three Sisters Collective hosted a webinar for Santa Fe Arts Institute fellow and multidisciplinary artist Heidi K. Brandow to present “The Memory Project.” Brandow, who is Native Hawaiian and Diné, mapped public art and memorials in Santa Fe and the city’s demographic data. She found that over 80 percent of memorials are dedicated to “colonizers,” meaning 4 out of 65 memorials in Santa Fe are dedicated to Native American people and culture—and most were men.

The collective was recently awarded a grant of nearly $100,000 to split with Alas de Agua Art Collective to create 12 murals around downtown Santa Fe to depict environmental issues and Indigenous culture. The murals are in the early planning stages, but education would likely be a key component, possibly even as part of local school curriculum.

For the collective, the nomination of Haaland—who will be the first Indigenous person to hold any cabinet secretary position—signals a clear departure from the Trump administration’s record of defying treaty rights, such as shrinking Bears Ears National Monument or revoking tribal status from the Mashpee Wampanoag tribe in Massachusetts. “For so long, Indigenous women have been ‘invisibilized,’” said Castro, “and now we can no longer be ignored.”

Related: Inside Deb Haaland’s historic bid to become one of the first Native congresswomen

For centuries, Native communities have fought disenfranchisement and marginalization. Now, Haaland will join another Native woman in U.S. Congress after a groundbreaking election.

The inaccurate and unfair representation of Indigenous peoples is crumbling in Santa Fe, if slowly. Today, the city still guards the remaining base of the plaza’s obelisk.

“It’s been quite frightening that there’s been a more concerted effort on behalf of the democratic city government to crack down on protesters than to actually make good on promises that they made to remove these things in the first place,” said Nick Estes, assistant professor of American Studies at the University of New Mexico, and a citizen of the Lower Brule Sioux Tribe.

Just two blocks north of the Santa Fe Plaza stands the obelisk honoring Kit Carson, who is infamous for leading thousands of Diné and Mescalero Apaches on death marches known as the “Long Walk” in 1863, which killed some 2,000 people.

“This isn’t just something we incited or [that arose] through the community,” said Autumn Rose Billie, co-founder of Three Sisters Collective, who is Taos Pueblo, Acoma Pueblo, and Diné. “These have been issues and conversations that have been talked about at our grandmothers’ tables.”

Kalen Goodluck is a journalist and photographer based in Albuquerque, New Mexico. He comes from the Diné, Mandan, Hidatsa, and Tsimshian tribes. Find him on Twitter and Instagram.