Stretching from New York to Maine, the 740-mile Northern Forest Canoe Trail is the longest inland water passage in the U.S.

Pines, spruces, and larches stand tall in the 30-million-acre Northern Forest, the largest intact ecosystem east of the Mississippi. But that’s not the only draw of this boreal and hardwood forest that stretches across northern Maine, New Hampshire, Quebec, Vermont, and New York. The longest inland water trail in the U.S. winds through these dense woodlands—now at their most vibrant with autumn colors. And in these thick forests, Indigenous roots run deep.

The extensive waterway—now designated the Northern Forest Canoe Trail (NFCT), which stretches for 740-miles—was a life-sustaining artery for Native Americans, who traveled back and forth along its length to trade food and supplies.

The waterways were “not only our highways, but the basis of all life—and they still are,” says Sherry Gould of the Abenaki Trails Project. Now, as people seek refuge from the novel coronavirus pandemic, the NFCT has become a lifeline for a different constituency, providing open-air recreation and boosting well-being. 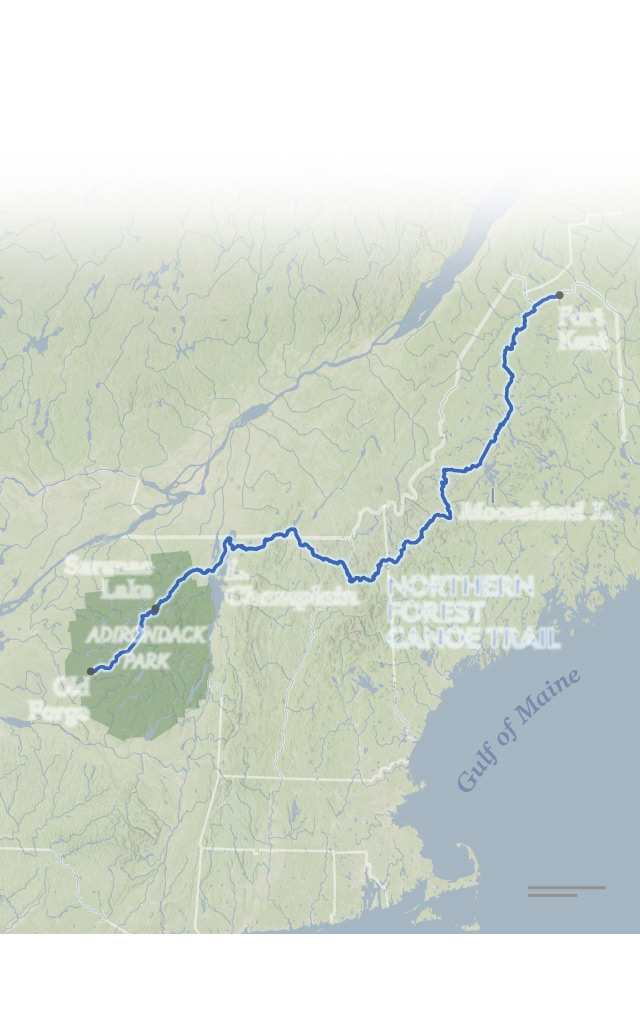 The Northern Forest Canoe Trail, the

follows much of the old trading routes of

the Indigenous peoples of the 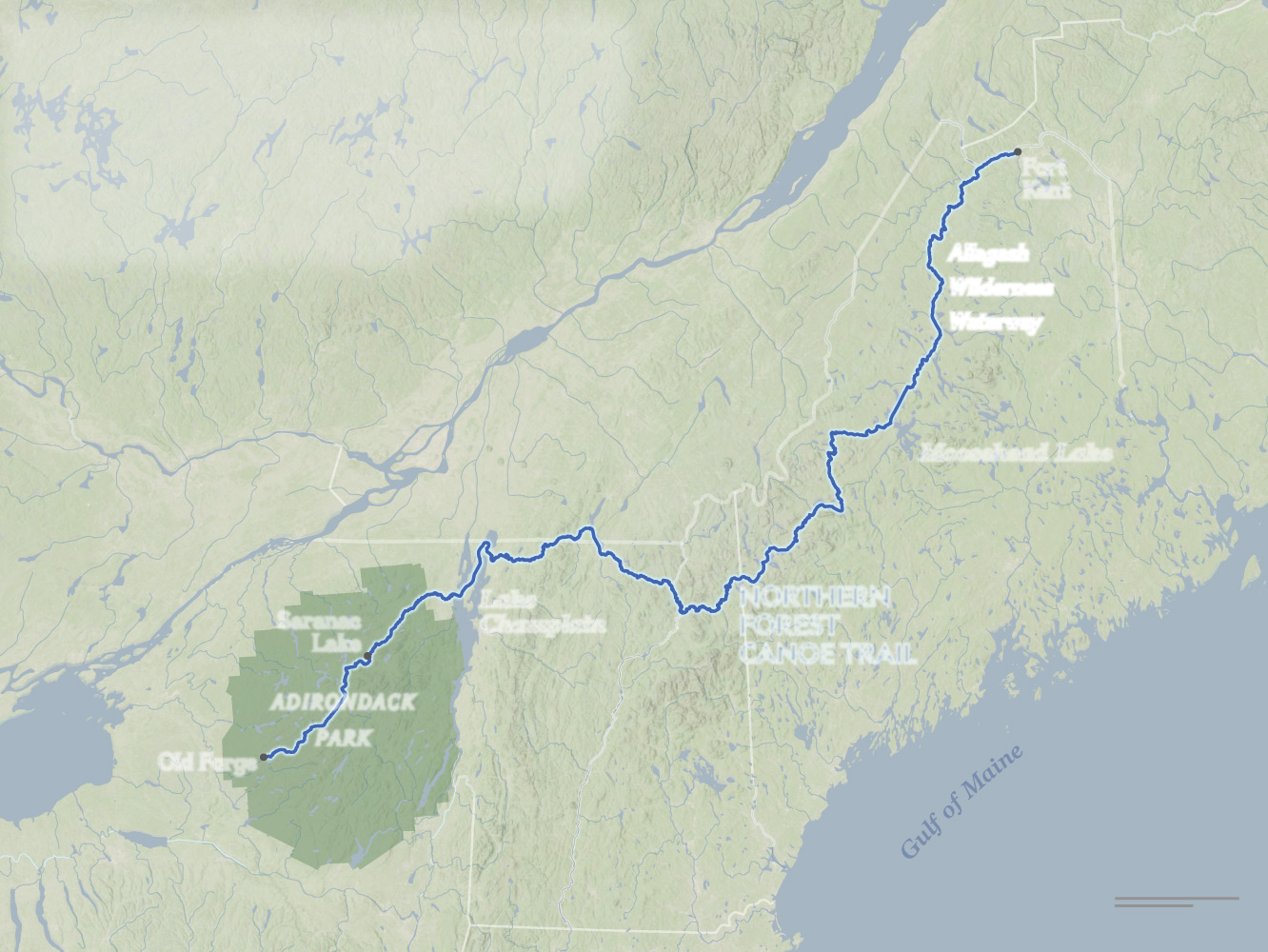 The Northern Forest Canoe Trail, the

follows much of the old trading routes of

the Indigenous peoples of the

(Related: This Norwegian concept of outdoor living could help you get through winter.)

“The paddle-sports industry as a whole is seeing a huge uptick, and the NFCT has fielded more trip-planning inquiries this summer than in years past,” says Karrie Thomas, longtime paddler and executive director of the NFCT nonprofit. “My hope is that people benefit from the time outside and the physical activity, and also make connections with the incredible landscapes and communities that our trails lead them to.”

Starting in New York State’s Adirondack Region and ending in Fort Kent, Maine, the NFCT links 22 rivers and streams, 56 lakes and ponds, and more than a dozen watersheds. The Haudenosaunee (also known as the Iroquois) and Wabanaki peoples navigated much of the current-day route for hunting and gathering and trading goods such as meats, corn, medicines, and herbs.

“We are a place-based people. Where we lived was everything to us,” says Don Stevens, chief of the Nulhegan Band of the Coosuk in Abenaki Nation. “These were our highways for trade, for visiting relatives. They were our summer grounds to grow crops, and the soils were fertile because of the floods. The Creator gave us seeds to allow us to feed ourselves, and our promise for those seeds was to be good stewards of the land and animals.”

Then came the European explorers in the early 1500s. They watched Indigenous canoers glide across the waterways with ease and followed suit with their own vessels—spreading disease and disrupting Indigenous hunting patterns along the way. “They unleashed a whole series of diseases like smallpox and influenza,” says Frederick M. Wiseman, Abenaki scholar, activist, and author. “We didn’t have immunity, so that decimated these areas. Some places lost between 60 to 90 percent of their population.”

Wars soon followed. The allied French and Native Americans, including the Northeast’s Wabanaki and Mohawk tribes, battled the British for control of present-day NFCT land. “Up to 1770, the whole NFCT went through cycles of peace and war,” Wiseman says. “It was very unstable, but the Abenaki and northern Mohawks were steadfast allies. By the 1840s and 1850s, Indigenous people had to merge into French identity…even though many people kept many elements of their culture.”

In 1976, outdoorsmen Mike Krepner, Ron Canter, and Randy Mardres of nonprofit Native Trails became fascinated by the forest’s epic narratives. They spent a decade studying old maps and blueprints to revitalize the historic water routes, only to later call it off due to the project’s overwhelming scope and scale.

In the early 2000s, husband-and-wife duo Rob Center and Kay Henry, the former marketing and management principals of Mad River Canoe in Vermont, picked up where Native Trails left off.

“The lure of this part of the country is its history. I was very conscious of the First Peoples when taking on this project,” says Center. “It wasn’t a right of mine to work with landowners and Indigenous leaders. It was a privilege.”

Center and Henry collaborated with local Native communities to ensure infrastructure, including campgrounds, avoided sacred burial sites. This caution was essential since most burial sites are within 200 feet of a water source, says Stevens. All 13 trail-section maps highlight the area’s Indigenous roots; trail kiosks do the same.

Receiving landowner approval was another hurdle for the couple, since much of the NFCT winds through private land. Center spent four years meeting with local landowners across the trail’s 45 communities to gain permission for campsites and trail connectors. Now, dozens of local “trail adopters” serve as stewards for their home waterways.

When the NFCT opened in 2006, the country had few like it. The record-breaking trail inspired others, including the 400-mile Connecticut River Paddlers Trail and the 117-mile French Broad River Trail from North Carolina to Tennessee. The National Water Trails System, a separate entity that launched under the National Park Service in 2012, also spearheads waterway restoration and conservation across the country.

The NFCT remains the ultimate prize in long-distance paddling, but it’s still an under-the-radar adventure.

“With COVID-19, there are a lot of places [on the NFCT] where you can find peace and solitude that you maybe couldn’t on nearby hiking trails,” says paddler Laurie Chandler, who wrote about her NFCT expedition in the 2017 book, Upwards. “It’s also much more doable for people my age who want to get out there and have some sort of big challenge.”

In 2015, Chandler, 53, became the first female to solo thru-paddle the NFCT, navigating rough rapids, camping on secluded islands, waking to wild loon calls—and on one especially memorable occasion—encountering a lone bull moose with a mouthful of grass, knee-deep in the water, near Maine’s Allagash Wilderness Waterway.

While a full thru-paddle requires one to two months, the NFCT’s Thomas says paddling individual sections takes between three and five days each. She recommends using the NFCT’s virtual trip planner before venturing out.

Novice paddlers will appreciate the easier downstream flow while traveling west to east. More experienced oarspeople can find upstream stints, tricky Class IV rapids, and sections of portaging (hiking overland with a canoe or kayak until the next body of water) along the full route.

For short trips or long expeditions, NFCT encompasses everything from camping on isolated Saranac Lake islands (trail map 2) to paddling through landscapes made famous in Henry David Thoreau’s journals in remote northern Maine (trail maps 11 and 12).

Thomas’s recommendations for fall-foliage paddle trips include Vermont’s Missisquoi River passage (trail map 4), which starts at the mouth of Lake Champlain and travels west; and Maine’s Moosehead Lake (trail map 11), a tranquil waterway beneath the Longfellow Mountains, renowned for wildlife such as bald eagles. Or, head 90 miles north to the unspoiled Allagash Wilderness Waterway (trail maps 12 and 13), where dark woods and fish-filled waters attract bears, bobcats, and moose—just like they have for millennia.

“When paddlers are on those waterways, they’re traveling in the same spots our ancestors did,” says Abenaki chief Stevens. “You wonder if they had the same reaction when you see something beautiful like a moose or heron. You’re not just paddling for exercise. Imagine what it was like and who used to live there.”