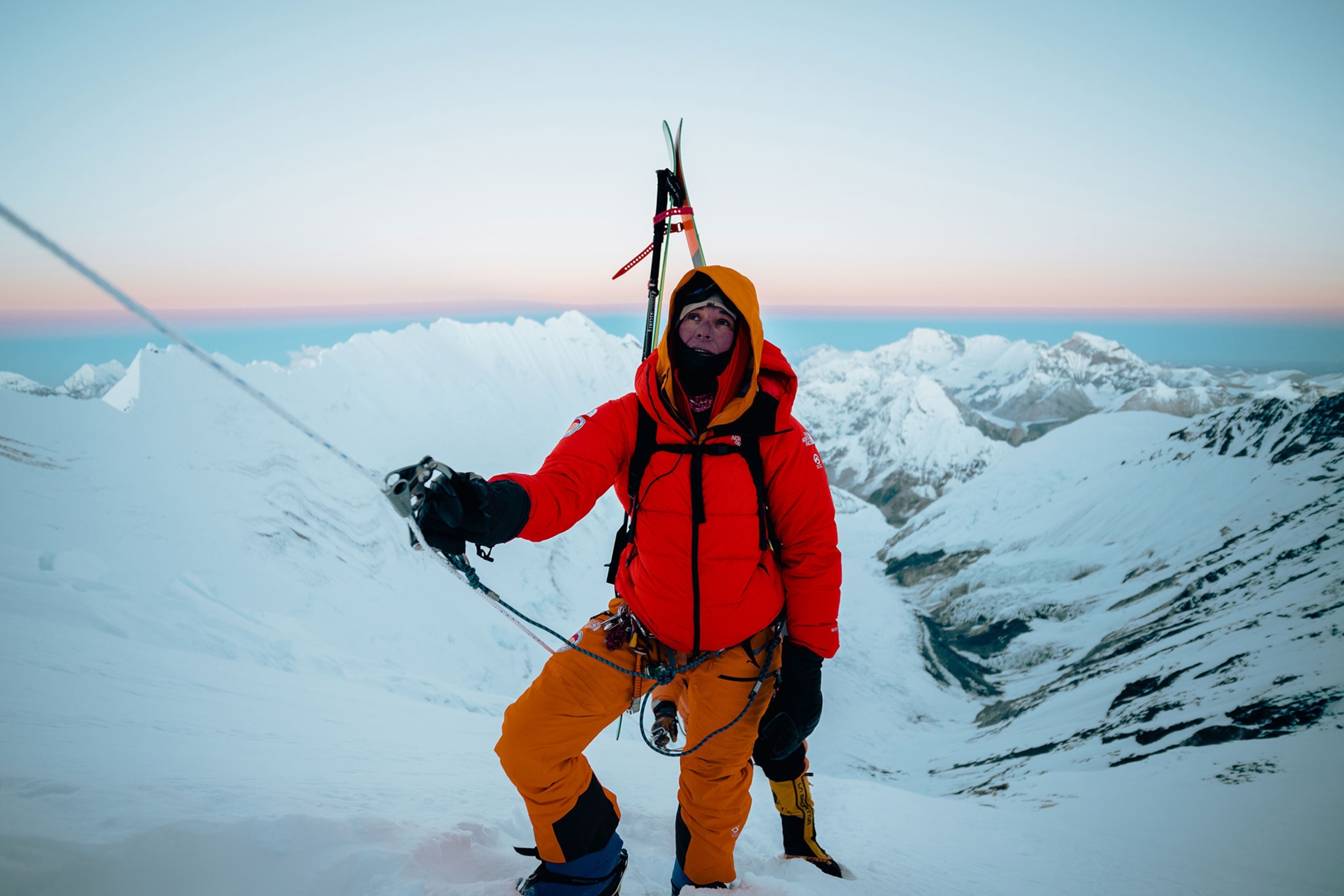 Inside the first ski descent of the world's 4th tallest peak

Hilaree Nelson pauses at sunrise while climbing Lhotse. She and Jim Morrison were trekking to the top to attempt the first-ever ski from the mountain's summit.
Photograph by Nick Kalisz, The North Face

No one had ever skied down Lhotse from its summit when ski mountaineers Hilaree Nelson, 45, and Jim Morrison, 43, completed the route on September 30, 2018.

Sitting beside Mount Everest, Lhotse rises to 8,516 meters (27,940 feet) and is the 4th highest mountain in the world. Nelson and Morrison aren’t the first to set their skis on the mountain—Jamie Laidlaw partially skied Lhotse in 2007—but they are the first to drop from the summit.

This noteworthy achievement is another notch in Nelson’s already heavily marked belt. She’s one of about 10 women who have skied the world’s highest peaks—those exceeding 8,000 meters—and she's the only woman who has skied more than one. She skied Cho Oyu in 2005 with no supplemental oxygen or assistance and was the first woman to ski the Makalu La Couloir on Makalu, the 5th highest mountain in the world. She and Morrison were the first Americans to complete a ski ascent and descent of India’s Papsura Peak (21,165 meters, 69,439 feet), a dream Nelson held for nearly two decades and an achievement that placed her on National Geographic’s 2018 Adventurers of the Year list. In 2018, she was named the second-ever captain of The North Face’s Global Athlete Team, a role held for the past 26 years by seasoned climber Conrad Anker, and she is featured in the brand’s female-empowering “Move Mountains” movement.

We spoke to Nelson about her latest achievement, how she overcame a dark period on the mountains, and the joy she felt skiing down Lhotse.

You started your ascent of Lhotse at Everest Base Camp. What did it feel like to be the only group there, when there are usually about 1,000 other climbers and medical professionals around during the normal climbing season?

When you’re the only ones up there it’s so much harder. There’s so much more work involved in terms of breaking trail and getting your equipment up to Camp 2. That was the real challenge. Trying to save every last bit of energy for the summit day was pretty hard.

Were you worried about not having a safety net?

I wasn’t too worried about the safety net. There’s a lot of helicopters flying around up there. We had really good radio contact among our team, good contact with our outfitter, and just the fact that we were nine deep in terms of climbers was enough eyes and ears to be kind of set.

What were some of the challenges you faced on your way up the mountain?

The first time we went through the [Khumbu] Icefall, we started late. We had really heavy loads and it was slow going. It’s just scary going through [the Icefall] when the sun is hitting everything up there.

We spent the night at Camp 1, and the Sherpas came up that next morning. We all started toward Camp 2, and we got stuck in a white out and they went down. We made an interim camp, not exactly knowing where we were. We were right under Nuptse and that avalanches like crazy. While the four of us were in a tent playing a game of cards, this huge avalanche came down. It didn’t hit us, we were totally fine, but it was scary enough that we packed up and pushed onto Camp 2 in a white out. It eventually cleared up so we could figure out where we were. We made it up to Camp 2 later that day.

[It was] just four of us at Camp 2, no Sherpas. We were calling it the “zombie apocalypse,” [because] there were all these crazy weird camps left behind. The only time I’ve been up there was [in] 2012, when at any given time there were 100-400 people, so it was really wild to be the only ones to get to Camp 2.

How long were you on the mountain?

The first acclimatization up to Camp 2 was around September 16th. We were up there three nights—one at Camp 1 and two at Camp 2—went all way back down, rested a few days, then started the full summit rotation. We had our puja [the Tibetan Buddhist ceremony to appease the mountain gods before an expedition in the Himalaya] on September 11th, so no one, no Sherpas or Icefall doctors, could go past Base Camp until September 12th. We summited September 30th.

It was really fast, super fast. Plus nobody else was on mountain to help us. We had to put in all the infrastructure.

So you just did one acclimatization then the summit push?

How did your summit approach go?

We were trying to do it without oxygen. We only made it to about 8,200 meters, so right at the base of Couloir is where we ended up putting on masks. Once you got off Lhotse Face and it switched into the Couloir, the snow got really punchy [with] breakable crusts and just really hard ascending. It was two steps up and one slide back, so it was taking way too long. We put on oxygen—that was a bit of a bummer for me, but we realized [otherwise] we wouldn’t make it in time.

But the winds cooperated with you that day?

It was still pretty breathless wind [when we summited at 1:45 p.m.], but by the time we left, 45 minutes later, the wind totally picked up exactly as forecast and started ripping off the summit. We were really under the wire, and it was kind of awesome. It made it all the more like, ‘Oh my God, we have got to do this! We have got to do this now!’ The Sherpa were fired up, and they pushed really hard.

How did you feel when you got to the summit?

We got on the summit and there was a ton of snow. We put our skis on right on the summit. I was really nervous, and I think Jim was pretty nervous too, because we had spent ourselves really hard. But it’s funny, skis are so familiar to both of us that once you put them on it was this nervousness but excitement, like ‘Oh my God, we’re going to pull this off. We’re going to do this, and we’re going to really legit ski it. We’re not side-slipping it; we’re going to ski this thing!’ It was pretty cool.

Was the whole team with you at the top?

Both the photographer/filmmakers made it to the summit. I had known one of them a long time and the other one had become a good friend. Neither of them had ever been above 20,000 feet. This is way out of their wheelhouse, and they crushed it. Only two Sherpas summited with us. One of them, it was his first summit of Lhotse. He was around 20 years old. It was awesome. It was a good group.

When you and Jim skied down, did you do it together or work more independently?

Jim and I kept it really tight together through the Couloir, because that was the hardest skiing. It was really variable snow conditions, everything from waist deep sugar snow to really consequential, breakable crust—consequential in terms of throwing your balance off and knocking you down or blowing a knee. You’d have one ski that would stay above the crust and one would go under. It was really tricky conditions.

Once we busted out of the Couloir, we had the whole of the Lhotse Face. We had already skied from Camp 3 [during our acclimatization] to get in a trial run, so we knew what Lhotse Face was like and it was a little bit easier to read the conditions. Once we broke out onto the Lhotse Face, we spread out a lot more.

At one point, it felt like we were half a mile apart, just having fun. Even though the Lhotse Face is pretty steep the whole time, it was sort of a known entity by that point, so that’s when it kind of loosened up. We were spread out and skiing different paces and coming back together. That part was really fun.

When you were named a 2018 National Geographic Adventurer of the Year, you said, “… if I combine everything we did in 2017, it was just the most success I’ve had in the mountains in a half dozen years. I see it as the start of a new relationship—a mending of my relationship with the mountains.” Can you talk about how you’re feeling now that you have another major accomplishment under your belt?


I had a rough spell there for a few years. Mountains mean the world to me, and there was kind of a dark place for a while. It’s so great to be on other side of that. It’s so good to be going back into the mountains for happy feel-good reasons, but also to really have these defined objectives, instead of floundering and treading water—that feeling of just not quite knowing which direction to go.

[The change] really started in 2016, but not in the mountains. It started with endurance races and things a little more outside of my box, but they were defined in the sense that they had a finish line and a starter gun. It was a space for me to train and look forward. Then, in 2017, I was able to apply that with Jim to very specific goals in the mountains.It feels really good, at this stage in my career, to have a renewed confidence and a great partner—and to have the support of friends and family in a new way has been awesome. It’s great. It’s hard to even describe. I just feel like time is so fast for me these days and that I really need to make my efforts count. I can do that with Jim. I can really work hard to make that happen.