In the last five years, scientists have tracked the Arctic wildcats on journeys longer and more challenging than ever thought possible.

In the last five years, scientists have tracked the Arctic wildcats on journeys longer and more challenging than ever thought possible.

In Alaska, where wildlife is never far away, most residents can ramble off a long list of animal sightings, from moose to brown bear to fox. But the Canada lynx is in a category of its own. Encounters with this striking feline, with tufted ears and mitten-like feet, are usually rare.

Until recently. In Anchorage, Alaska’s most populous city, the normally elusive cats are making regular appearances.

“If you look at the NextDoor app and Facebook posts, people are seeing lynx everywhere” in Anchorage, Alaska’s most populous city, says David Saalfeld, a wildlife biologist with the Alaska Department of Fish & Game. Many people, he adds, are surprised at how similar the 20- to 30-pound feline is to their own pets. When hunting, Canada lynx pounce in the same way, and their playful kittens are delightful to watch.

“We get so many reports of them being on people’s porches looking in the windows. That’s just like a house cat,” Saalfeld says.

Lynx run-ins are likely on the rise because populations of their favorite prey, the snowshoe hare, are at their peak. Hares experience a natural boom-and-bust population cycle that can last between eight to 11 years, and when hares are plentiful—as is the case now—so are lynx.

These wildcats don’t just hang out in Anchorage, though—they’re found all over Alaska, across northern Canada, and even into parts of the lower 48. Not so long ago, scientists weren’t sure how far one lynx could travel. But in the last five years, researchers with the Northwest Boreal Lynx Project have documented the cats taking epic journeys, longer and more challenging than ever thought possible.

For the first time ever, scientists have

been able to consistently reveal the

movements of lynx. What they found, is

that they make incredible one-way jour-

sals. The likely reason for these voyages is

Hobo, shows us what a dispersal can look

2,174-mile journey across the forests and

mountains of the Yukon landing him 750

miles away from his birthplace a year later. 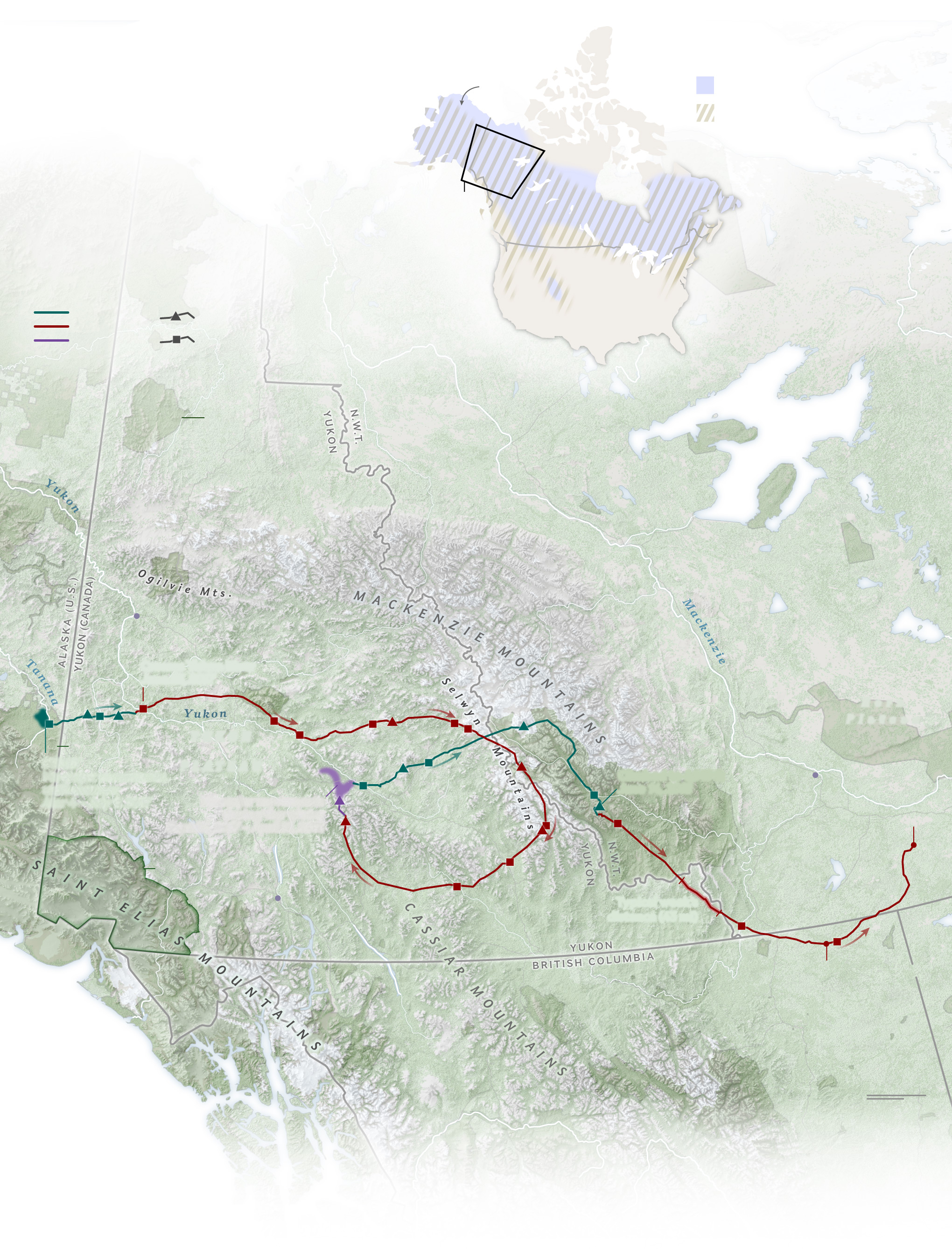 For the first time ever, scientists have been able to

consistently reveal the movements of lynx. What

they found, is that they make incredible one-way

for these voyages is to follow the cycles of their

named Hobo, shows us what a dispersal can look

like. He had a tracking collar placed on him in March

the forests and mountains of the Yukon landing him

750 miles away from his birthplace a year later.

One of the project’s star travelers, nicknamed Hobo, was radio-collared in Alaska’s Tetlin National Wildlife Refuge in March 2017, just over the border from the Yukon. The lynx took off from his home range in June 2017, and, by July 2018 had traveled a whopping 2,174 miles, across mountains and often powerful rivers.

“That was the first one that really took off. We had inklings of this, but we didn’t really know too much about it,” says Knut Kielland, a professor of ecology at the University of Alaska Fairbanks’ Institute of Arctic Biology. It “was pretty exciting.”

To date, project scientists have collared more than 170 male and female lynx at four wildlife refuges as well as Gates of the Arctic National Park, tracking the animals as they venture across Alaska into Canada’s Yukon Territory and Northwest Territories. (Learn about the little-known wildcats you’ve likely never seen.)

But a mystery remains: Why are the cats making such long treks? The scientists speculate that they’re hunting snowshoe hare, and, once they find pockets of new prey, establishing a new home territory. In time, researchers hope to gain enough information about these journeys to really understand why the animals range so far.

Meanwhile, these data are key for helping researchers understand what lynx need to keep thriving in Alaska and across northern Canada. For instance, knowing what types of habitat lynx pass through on their lengthy migrations can inform land use decisions, such as creating habitat corridors that allow the wildcats to roam freely.

In the winter of 1999 to 2000, during the last peak of the snowshoe hare population, a trapper known only as Jack R. reported catching almost a hundred Canada lynx on his trapline in Alaska’s Brooks Range. Lynx trapping is legal with a license in Alaska, and there are no limits to how many a person can harvest.

Surprised, he asked Kielland (who was also a trapper years ago), how that could happen, considering the small territory his trapline covered.

Previously, scientists believed male lynx roamed territories of about 20 square miles, and Jack R.’s trapline was 77 square miles—suggesting that the trapped animals had been venturing beyond their territories.

The team also searches for lynx dens, often hidden near fallen logs and surrounding vegetation. When they find kittens inside a den, they weigh each one and attach a tag to one of its ears. It's essential to tag kittens, Kielland says, so researchers can identify the animals later, providing data about how far they travel from their birthplace, as well as which ones stick together as adults, says Kielland.

Male kittens tend to leave home earlier than females, he adds. Once grown, females remain relatively close to their mothers while males establish their new home territory farther away. (Listen to the sounds of male lynx fighting over a female.)

In addition to Hobo, the team has tracked some exceptional journeys, including an adult male lynx, tag number #700594—“no nickname for this chap,” says Kielland—collared near Bettles, Alaska, in February 2019. Three months later he trekked 248 miles to the Arctic coast before heading east as far as the Sagavanirktok River, and then south into the Nigu River in the Brooks Range. As of July, he’s still going, and, just as important, his collar is still working. (Some tracking journeys end when batteries die or collars fall off.) His trip so far: nearly 2,000 miles.

In 2011, two collared lynx went back and forth across the main channel of the glacial Tanana River, the Yukon River’s largest tributary, as late as November, when the average minimum daily air temperature was a frigid -16 degrees Fahrenheit.

Why the long journeys?

The quest for hare and other prey doesn’t fully explain these incredible treks, Saalfeld says.

This past spring, when hares were abundant, a male lynx collared in Anchorage as part of a separate study by the Alaska Department of Fish & Game traveled all the way to Kluane National Park in southwestern Yukon Territory, a distance of some 600 miles.

“The food is here,” says Saalfeld. “Not sure why a decent-sized male would decide to up and leave an area that has plenty of prey.”

Karen Hodges, a professor of conservation ecology at the University of British Columbia who has studied lynx, says the Northwest Boreal Lynx Project data squares with existing, less complete information about their dispersals, and that the team is using better technology and tracking tools to tell the story.

“Without question this is spectacular—that is a lot of movement,” says Hodges, who isn’t involved with the project.

All of that movement does make clear why Canada lynx all tend to be genetically similar. “Across North America, a lynx is a lynx is a lynx. They are moving, they are mixing. And we’re not getting localized pockets of weird genetics.”

The lynx project is also “revealing more secrets about their lives than ever,” Kielland says.

For instance, the scientists are finding dens with seven to eight kittens, a larger litter size for Canada lynx than thought—though the fecundity may be tied to the snowshoe hares’ boom cycle.

The team has also found evidence that the cats are not as solitary as believed: Collared male and female pairs spend time together when it’s not mating season, and there were even a few cases of two female lynx hunting together for long periods of time—possibly mother-adult daughter pairs, says Kielland. (See photos of our favorite felines.)

Though questions persist, Kielland says the research is as fulfilling as it is intriguing.

“They’re fellow creatures, and we are fascinated by the kinds of things that we see these animals are engaging in,” he says. “That is just, on a personal level, intriguing, fascinating, and wonderful.”