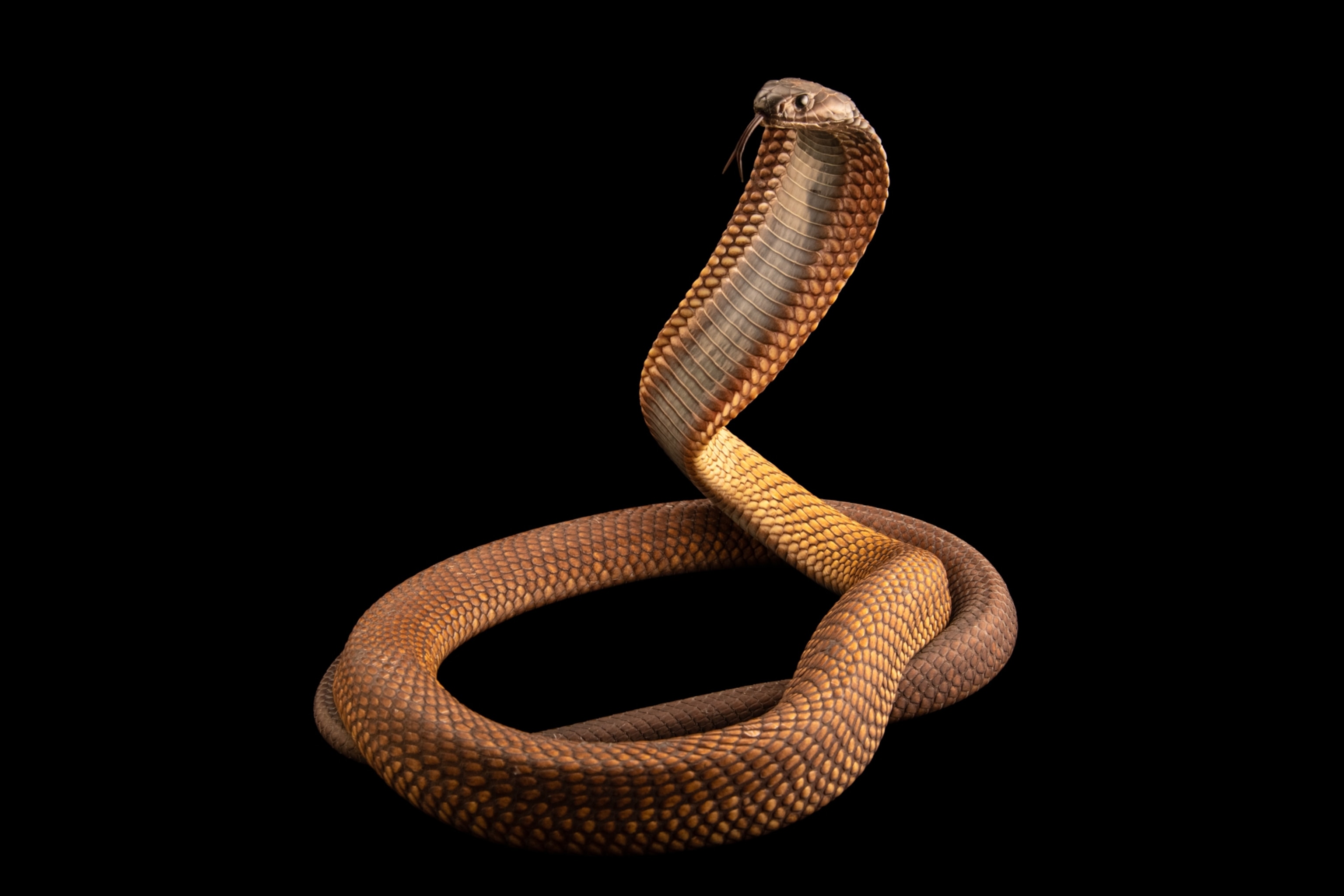 The milestone image in National Geographic’s Photo Ark emphasizes reptiles, many of which are in danger of extinction.

It was only 6:45 a.m., photographer Joel Sartore noted—and yet his clothes were soaked through to the skin, like “I’d been thrown in a swimming pool.”

On this muggy September morning, he was stretched out on a barnyard floor, photographing ungulates such as white-bearded wildebeest at Arabia’s Wildlife Centre in the United Arab Emirates (U.A.E.). Fall temperatures here can reach 109 Fahrenheit—so hot, he says, that three of the four lamps he uses to illuminate his photography subjects had stopped working.

But the setbacks were no sweat for Sartore. Over the next two weeks he added more than 200 new species native to northern Africa and the Middle East to National Geographic’s Photo Ark, which aims to document 15,000 species living in zoos and wildlife sanctuaries around the world.

He documented such striking animals as the Arabian eagle owl, the northwest African cheetah, the Arabian sand gazelle, and the critically endangered Arabian leopard, all housed at Arabia’s Wildlife Centre, a sanctuary and nature reserve. (Read why Sartore founded Photo Ark 15 years ago.)

Sartore describes Photo Ark as “a long-term ad campaign on behalf of nature,” particularly the 35,500 plant and animal species that are on the verge of vanishing forever. “We must keep these issues alive and top of mind to get the public to wake up in time to save the planet,” he says. Dozens of species go extinct daily, mostly due to human-influenced causes such as habitat destruction, pollution, and climate change.

While in the Middle East, Sartore crossed the 12,000th-species threshold. Though he didn’t know which animal was exactly the 12,000th, he chose the Arabian cobra to represent the milestone because a reptile has never been in the Photo Ark spotlight. The 11,000th species, announced in February, was the long-toothed dart moth of the U.S. Southwest.

Like most cobras, the Arabian cobra raises its hood—a flap of loose skin behind its head—as a warning display, which Sartore experienced during his photo shoot. While photographing the venomous animal, he stayed farther away from his subject than usual, used a longer camera lens, and worked quickly.

After a lifetime of photographing wildlife, Sartore is comfortable around most species, but safety is of utmost importance. “You wouldn’t want to get bitten,” he says of the Arabian cobra, a species that causes fatal snakebites each year in the Middle East.

Sartore will reverse roles and see himself in front of the camera on November 16, when the Arabian cobra will be officially announced as the 12,000th Photo Ark species on ABC’s daytime drama General Hospital.

“I’m going to get an Emmy for most wooden performance,” quips Sartore, “but it’s for a good cause: We’re introducing the world to animals they never knew existed.” (Go behind the scenes of Photo Ark.)

The heat is on

Because snakes are excellent hiders and occur in low densities in the wild, they “can be very difficult study subjects,” says Philip Bowles, coordinator of the International Union for Conservation of Nature’s Snake and Lizard Red List Authority, which surveys reptiles in the wild worldwide and determines their conservation status.

The four-foot-long, coffee-colored serpent lives in rocky, semi-dry regions with access to fresh water, and likely eats small rodents and birds, says Bowles, who was a co-author on a 2012 IUCN report about the Arabian Peninsula’s reptiles.

Though he says he understands the Arabian cobra is the 12,000th species, he laments that another reptile wasn’t selected as the poster species this time around. “There isn’t anything exceptional about [this cobra],” Bowles says. “I don’t want to dismiss it as boring, but it’s not a priority.”

Nonetheless, Bowles says the cobra is an opportunity to educate the public about the need to conserve reptiles. There are roughly 11,000 known species, and nearly one in five is threatened by extinction. For instance, the Chinese water dragon, found in China and Southeast Asia, has been badly affected by widespread habitat loss and the pet trade, making it vulnerable to extinction.

Go behind the scenes of the Photo Ark

Extreme temperatures, like the ones Sartore experienced, also may further imperil reptiles, which are cold-blooded and must avoid long exposures to hot environments, Bowles says. Average temperatures on the Arabian Peninsula are increasing by more than 1 degree Fahrenheit each decade due to climate change, while precipitation is decreasing overall.

Though there are a lack of studies on how oppressive heat could impact snakes, Bowles says some predictions suggest that increased temperatures could keep lizards—which are more easily studied than snakes—from venturing into the heat, and thus limit opportunities for them to find food. That’s likely to be the case with some snakes as well, he says.

“My bottom line is this: To give one’s full measure of devotion to a cause deeply believed in,” Sartore says. “If that’s not the very definition of a life well lived, it should be.”

The National Geographic Society, committed to illuminating and protecting the wonder of our world, funded Explorer Joel Sartore’s work. Learn more about the Society’s support of Explorers highlighting and protecting critical species.