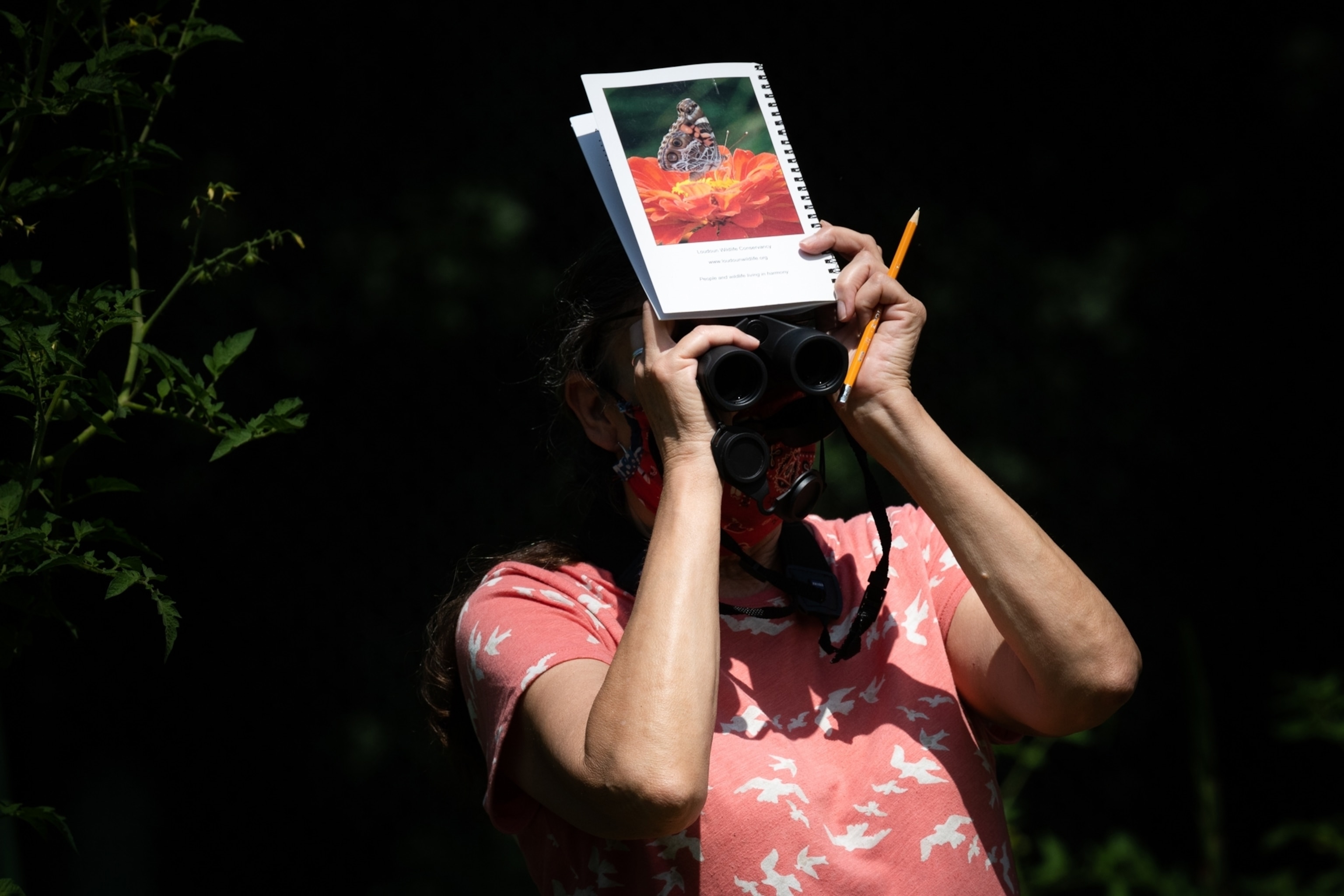 Americans are observing nature during the pandemic, helping scientists with research

As coronavirus has forced many people to stay close to home, more "citizen scientists" are providing invaluable data on insects, birds, and more.

Claudia Thompson-Deahl looks for a butterfly in Reston, Virginia, in July. Thompson-Deahl is part of a group of citizen scientists in northern Virginia who have gathered regularly for nearly 30 years to record birds, plants, and insects.

When activity in the U.S. ground to a halt in early March due to the coronavirus pandemic, many people did more than just sit through endless Zoom calls in their sweatpants. They went outdoors and began to document their surroundings.

Citizen science websites in the U.S. have seen an uptick in data, such as the Cornell Lab of Ornithology’s eBird, which has had a 29 percent increase in reports so far this year, as compared with last. NestWatch, another Cornell Lab website that encourages people to track sightings of bird nests, saw a 41 percent increase year over year.

SciStarter, a website that connects citizen scientists with active research projects, recorded a 480 percent increase in contributions to projects in April 2020 over April 2019. By the end of the year, its founder, National Geographic explorer Darlene Cavalier, expects to have more than 100,000 registered users. And iNaturalist, a joint initiative of the California Academy of Sciences and National Geographic Society, expects to hit a record 50 million observations in coming weeks.

A field skipper, or sachem, butterfly perches on a butterfly in Reston, Virginia, in an area conserved due to citizen science efforts.

“There’s a persistent stereotype that [most published] research happens in industry or academia,” says Caren Cooper, an associate professor of public science at North Carolina State University. But in reality, nature-loving volunteers in the U.S. contribute a great deal to on-the-ground research, from tracking sea turtles to monitoring the luminance of the night sky.

The contributions of volunteers are especially important in 2020, as COVID-19 has forced many scientists around the country to postpone or cancel their fieldwork.

Jim Waggener tallies species observed by citizen science participants in October 2018 at the Julie Metz Wetland in Woodbridge, Virginia. Waggener began the surveys about 30 years ago to better understand what would be lost with development.

Every Friday, Jim Waggener and a group of others—mostly senior citizens—venture into natural areas throughout northern Virginia to look for dragonflies, butterflies, damselflies, and other species; their recordings providing valuable insight into insect populations. (Related: Read about the global decline in insects.)

Waggener, who founded the group, called Occoquan Bay Meadowoods Surveys, almost 30 years ago, says social distancing due to the virus has created challenges this year, such as making it harder for two people to look at the same plant simultaneously. Even so, he’s proud the data his team has collected this year is on par with prior years.

“We have a lot of people who started shadowing us and coming with us who knew very little about the natural world,” Waggener says. The newcomers “never had a chance to study their local areas,” but are quickly honing their observational abilities.

When field work is cancelled

While citizen science may be more visible thanks to social media, the concept is not new, notes Cooper, who has written two books on the topic. Sailors in the 1800s jotted down currents and wind; these recordings led to better predictions of ocean hazards. The Audubon Society’s annual Christmas bird count, an all-volunteer effort, began in 1900.

Cooper has spent much of her career culling information from large databases and public datasets, so when the pandemic hit, she knew how to help students who suddenly found their research put on hold.

Lauren Pharr, a North Carolina State ornithology graduate student, was one of them. She had planned to begin her field studies into how urbanization affects avian physiology in Raleigh, North Carolina, studying northern cardinals. Instead, Cooper helped Pharr find a 20-year citizen science dataset through the Smithsonian Institution, which had similar information. (Related: Learn about 10 citizen science projects working to protect the environment.)

Pharr has combined that data with noise and light pollution maps to draw conclusions about bird survival. It’s still too early to offer specifics, but she’s found preliminary data showing some species react poorly, as one might expect, and others actually thrive in urban settings.

“For whatever reason, I didn’t think I’d be considered a great grad student because I didn’t go out and collect my own data,” Pharr says. “I learned it’s not all about fieldwork, it’s about working with it and interpreting it.”

Waggener, 84, started leaving his home in Alexandria, Virginia, to record birds—and later butterflies, dragonflies, and wildflowers—in the early 1990s as part of his efforts to preserve land on a former prison property and decommissioned Army base.

A bird blind at Occoquan Bay National Wildlife Refuge offers citizen scientists the opportunity to survey species from afar. The limited number of spots, however, makes birdwatching while maintaining social distancing a challenge.

Photographs by Brooke McDonough
Please be respectful of copyright. Unauthorized use is prohibited.

The diversity of species identified by volunteers in the unique grassland area strengthened the push by northern Virginian communities to create the Occoquan Bay National Wildlife Refuge and special recreation management area in the late 1990s.

“You don’t know what’s there until you know it’s there,” Waggener says. “That’s what repetitive surveys can do—peel away one layer after another of nature so you see just a bit deeper into what it’s all about.”

In recent years, the northern Virginia volunteers have turned their focus to insects, which can be neglected in scientific research.

Judy Gallagher, a retired computer programmer, figures she spends up to 30 hours a month in the summer with the group at the survey sites; she also spends the same number of hours analyzing the data. (Related: Read how citizen scientists are tracking wildlife with personal technology.)

“There are certain species, like monarchs, that are very carefully studied,” Gallagher says. “Most insects are not, and the more data we can give, the more likely it is we can come up with ways of mitigating species loss.”

Elise Larsen, a butterfly researcher at Georgetown University in Washington, D.C., uses the volunteers’ data from Occoquan refuge to learn more about how a relatively common butterfly called the silver spotted skipper lives and reproduces. The resulting models can show trends in butterfly populations and how they might change due to human impacts, such as climate change or pollution.

“These people are passionate about the topic,” Larsen says, “and they’re committed to it.”

Occasionally concerns arise over the accuracy of such non-scientist endeavors. A 2014 study, for instance, showed that as citizen scientists age, errors can increase.

But ask anyone working with citizen scientists or with data collected by non-researchers, and they’ll tell you that critique doesn’t carry much weight.

“No dataset is ever perfect, and that includes professional datasets,” says Robyn Bailey, NestWatch project leader. She believes enough safeguards exist to flag most errors, and the sheer volume of information amplifies trends and drowns out “the noise of messy data.”

Data collected by citizen scientists, such as Waggener and his crew, can be more accurate than that gathered by seasonal staff, adds Georgetown University’s Larsen. That’s in part because citizen scientists are sometimes more willing to admit they don’t know a species, instead of making the wrong guess (Related: Learn about people-powered data visualization.)

As for the new wave of interest in citizen science, Cooper hopes it won’t subside as life slowly returns to normal.

“More people are seeing the citizen science approaches and collective effort toward discovery as our best hope toward figuring out how we live together on this planet,” she says.