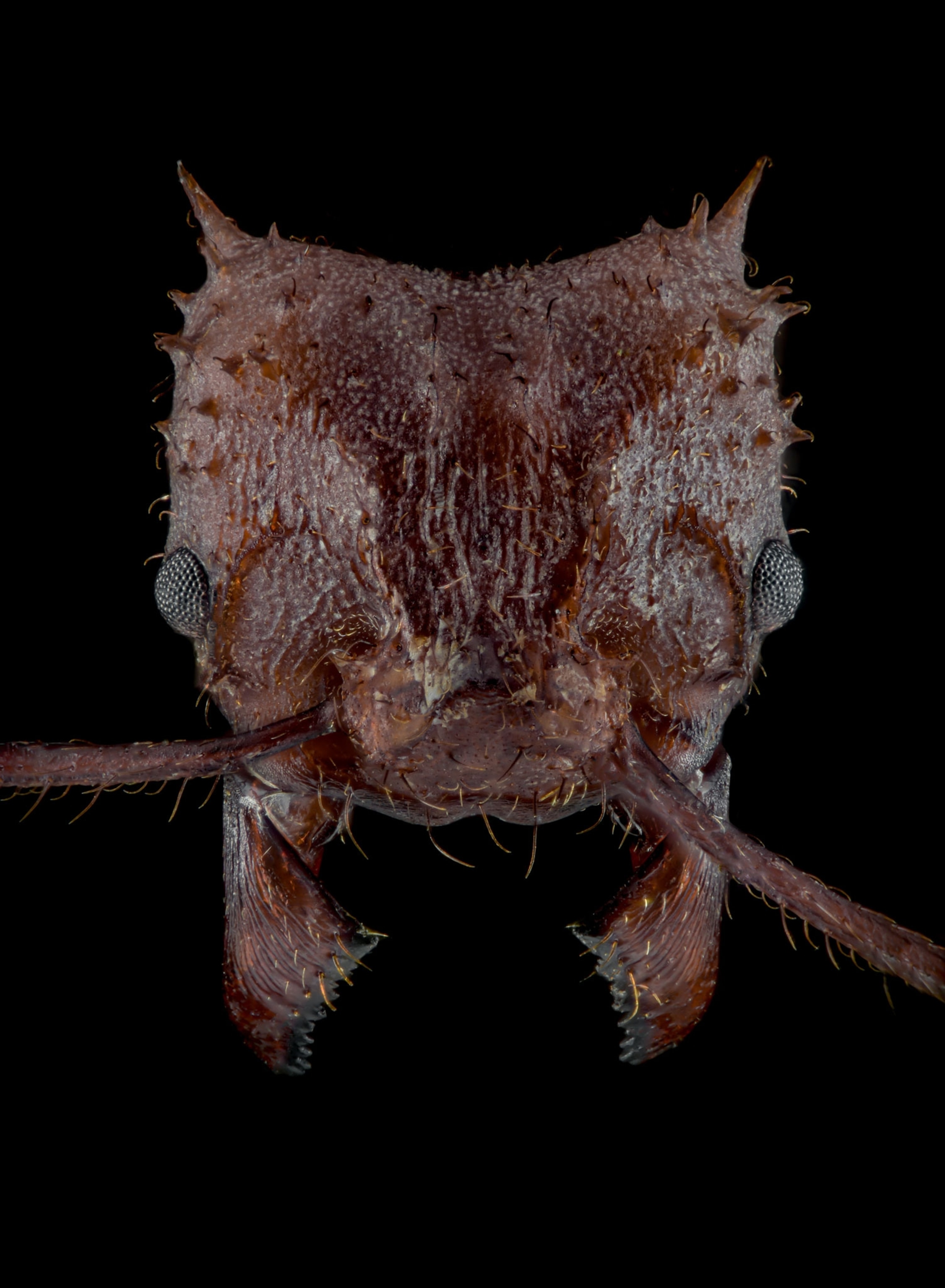 Researchers have discovered a new type of mineral, similar to dolomite, covering the exoskeleton of leaf-cutter ants.

The fungus-farming ant Acromyrmex echinatior has a newfound type of biomineral covering that serves as armor.

Leaf-cutter ants are named for their Herculean feats: they chomp foliage and carry unwieldy pieces, like green flags many times their size, long distances to their colonies. There they chew up the leaves to feed underground fungus farms. Along the way, the insects brave all manner of predators—and regularly engage in wars with other ants.

But these insects are even tougher than previously thought.

A new study shows that one Central American leaf-cutter ant species has natural armor that covers its exoskeleton. This shield-like coating is made of calcite with high levels of magnesium, a type found only in one other biological structure: sea urchin teeth, which can grind limestone.

Bones and teeth of many animals contain calciferous minerals, and crustaceans, such as crabs and lobsters, have mineralized shells and other body parts. But before this finding, no type of calcite had been found in any adult insect.

In leaf-cutter ants, this coating is made of thousands of tiny, plate-like crystals that harden their exoskeleton. This “armor” helps prevent the insects from losing limbs in battles with other ants and staves off fungal infections, according to a paper published November 24 in the journal Nature Communications.

The discovery is especially surprising because the ants are well known. “There are thousands of papers on leaf-cutter ants,” says study co-author Cameron Currie, an evolutionary biologist at the University of Wisconsin-Madison.

“We were really excited to find [this in] one of the most well-studied insects in nature,” he says.

Though this paper looked only at one species, Acromyrmex echinatior, Currie and colleagues suspect other related ants have the biomineral too.

Long before humans or their immediate ancestors evolved, about 60 million years ago, leaf-cutter ants invented their own form of agriculture. These underground fungal farms are the result of a symbiotic relationship that provides food for ant larvae and protection for the fungus, and each ant species has its own species of fungi.

Some of the nearly 50 species of leaf-cutter ants, including the ant in the study, also harbor a symbiotic bacterium to keep their gardens from becoming infected by other harmful fungi. This microbe coats young workers; as they meander through their fungus gardens, the bacteria secrete chemicals that kill the invasive fungi.

A former postdoctoral researcher in Currie’s lab, Hongjie Li—now a researcher at Ningbo University in China—began studying these bacteria and soon became intrigued by strange, tiny crystals covering the ants’ exoskeleton. He convinced geologists to help him study the mineral-like material, using several types of imaging techniques, including electron microscopy, to characterize the composition.

When Li got the results one fall morning in 2018 showing the ants are covered in a type of biomineral not previously seen in any insect, he was ecstatic.

Li says the ant’s armor is very similar in composition to the mineral dolomite, except slightly harder.

Like all insects, ants have exoskeletons made of chitin, which is tough and flexible. To see if this additional layer of biomineral acted as extra armor, Li and colleagues first raised ants in the lab with and without the biomineral layer. (If ants are separated from their colony as pupae and raised in certain conditions, they don’t develop the coating.) They then did several tests.

One of these experiments involved pitting these ants against a slightly larger but closely related species in “ant wars,” Li says. Over the course of an hour’s battle, the “rock ants” lost three times fewer body parts than those without the mineral coating.

Next, the researchers exposed the insects to a pathogenic fungus, which can infect ants, and is related to fungal species that cause “zombie-like” behavior. After six days, all the mineral-free ants had died. But only half of their armored kin had succumbed.

Yet another experiment showed the exoskeletons of these ants are more than twice as hard when they contain biominerals as when they do not.

The mineral coating also expands as the ants grow older. Young ants tend to the fungal gardens, and don’t face a high risk of attack by other ants or predators, and have little need for it. By the time they begin to forage in the world outside the fungus gardens, they have a thicker coating than they did as youngsters, Li says.

Andrew Suarez, an entomologist at the University of Illinois, says it’s particularly exciting to see this type of mineral in an exoskeleton, considering similar minerals were previously found in more isolated, specialized structures, such as teeth.

“This would be like having your body covered in [tiny crystals] of enamel,” says Suarez, who wasn’t involved in the study.

“I enjoyed this paper, as it documents something new—biomineralized skeletons in insects,” says Andrew Knoll, a biomineral expert at Harvard University.

“A number of arthropods make calcium carbon exoskeletons, including ... crabs and lobsters and the extinct trilobites, but extending this to fully terrestrial insects is genuinely interesting,”

The scientists also say that these kinds of biomineral crystals could have manufacturing applications in the future, such as in coatings or nanocrystals that add strength to or prevent corrosion in various materials.

For now, the scientists say, the point is to understand the role these minerals are playing in the ants themselves—and see if there are other as-yet-undiscovered armors and biominerals out there.

It’s likely there are, Currie says. “If you don’t know about the biomineral in this species, what does this say about the 99.9 percent of insects that have received little or no study?”