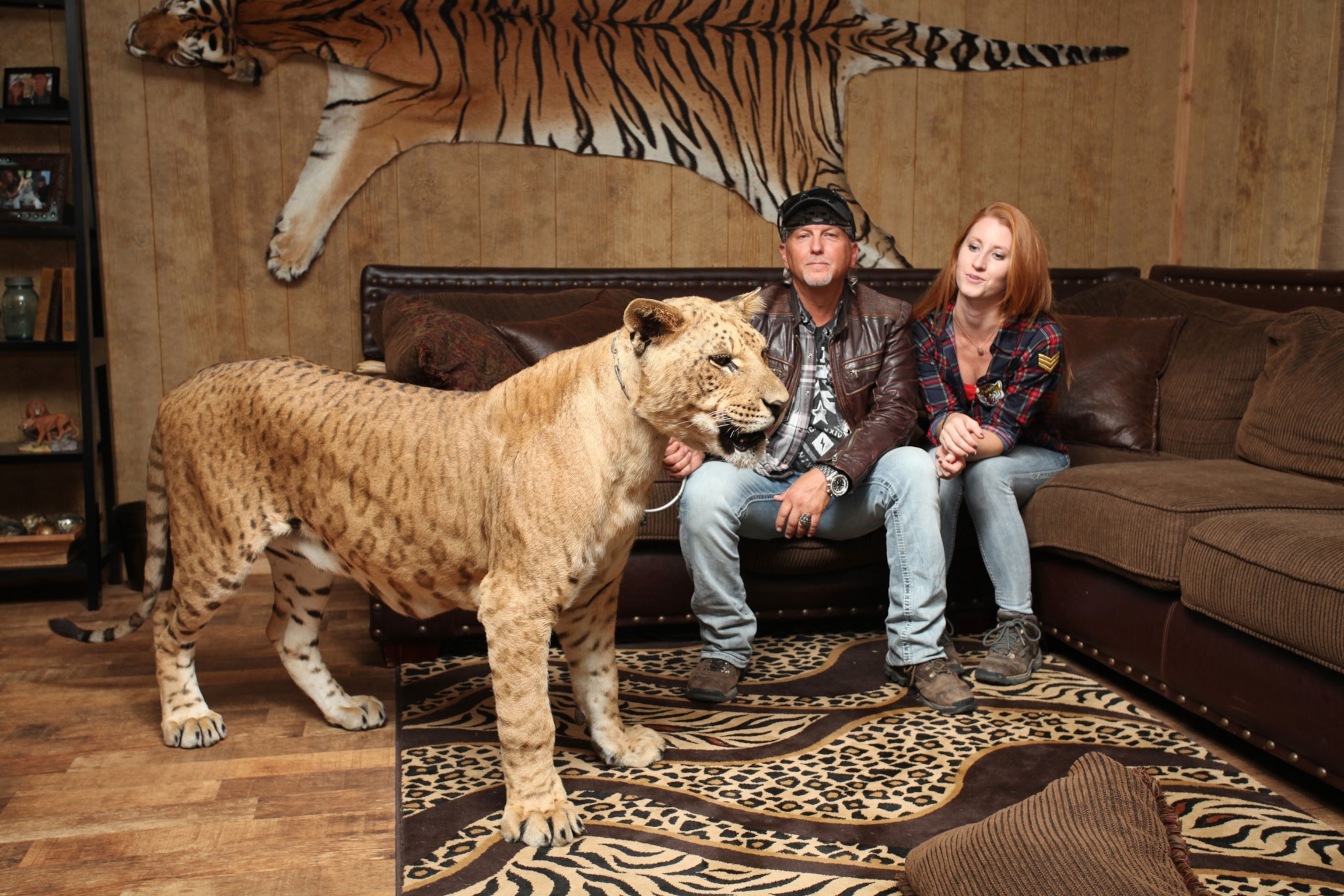 Jeff and Lauren Lowe sit with liliger Faith—the daughter of a male lion and a female liger hybrid—in their Wynnewood, Oklahoma, home in 2016. The Department of Justice alleged that the Lowes violated federal law by putting the health of their animals at “serious risk.” This year, the department confiscated all 146 of their exotic animals and barred the couple from exhibiting animals for life.
Photograph by Ruaridh Connellan/BarcroftImages / Barcroft Media via Getty Images

Mirage and Caesar, born in December 2020, were the last in a long line of tigers to start life at Greater Wynnewood Exotic Animal Park—and among the first to escape the Oklahoma petting zoo’s cycle of breeding and alleged mistreatment. The zoo has been closed to visitors since October 2020, and today, a court decision permanently bans the zoo’s owners, Jeff and Lauren Lowe, from exhibiting animals to the public in a facility or online.

The U.S. Department of Justice (DOJ) confiscated the two cubs from the zoo—formerly owned by Joseph Maldonado-Passage, “Joe Exotic,” the star of Netflix’s popular docuseries Tiger King—in January 2021 when they were about seven weeks old, along with eight other cubs and four mothers. Now, Mirage and Caesar are living together on more than an acre of forested land at Wild Animal Sanctuary, in Keenesburg, Colorado. Soon, they’ll join more young rescued tigers in a 20-acre habitat at the sanctuary for the rest of their lives.

In January 2020, Joe Exotic was sentenced to 22 years in prison for murder-for-hire and wildlife-related crimes. His former partner, Jeff Lowe, had taken over the zoo in 2016. But Lowe and Lauren became embroiled in their own legal troubles. Last November, the DOJ sued the Lowes in a civil case, alleging that they repeatedly violated the Animal Welfare Act and the Endangered Species Act by failing to provide their animals with veterinary care, and proper nutrition, enclosures, and sanitary conditions, placing the health of the animals in “serious danger.”

Among the alleged violations prosecutors cited was a lion cub named Nala, found by government inspectors lying unresponsive in the mud in June 2020. They also documented two arthritic wolves caged on a concrete floor, a grizzly bear whose bones showed beneath her skin, a fisher cat with a lame leg, and the bodies of two tigers buried under burned rubble. The corpses were attracting biting flies that inflicted bloody wounds on the ears of nearby tigers, bears, and wolves.

Please be respectful of copyright. Unauthorized use is prohibited.
Please be respectful of copyright. Unauthorized use is prohibited.
Left: The Wild Animal Sanctuary sits on two 720-acre reserves in Keenesburg, Colorado, and is home to more than 600 rescued big cats and other animals. In 2021, the sanctuary took in 80 animals that the DOJ confiscated from the Lowes.
Marc Piscotty via Getty Images
Right: Two tiger brothers rescued from Jeff Lowe’s G.W. Zoo relax in their habitat at Wild Animal Sanctuary in April 2020. They will live out their lives here, with proper nutrition and vet care.
Photograph by Helen H. Richardson/MediaNews Group/The Denver Post via Getty Images

In June 2020, a federal judge ordered the Lowes to relinquish the property to Big Cat Rescue sanctuary owner Carole Baskin to settle a longstanding legal dispute.

After Lowe’s license to exhibit animals was suspended in October 2020, he forfeited it permanently. But he continued to sell “shout-out” videos featuring his animals on Cameo, National Geographic reported. At the time, no laws existed pertaining to exhibiting animals online.

Between January and August of this year, the justice department confiscated 146 animals from the Lowes—the agency’s largest confiscation of zoo animals to date. Various sanctuaries have taken them in.

On Thursday, five weeks afterTiger King 2, the new installment of the docuseries, premiered, a federal judge in the Eastern District of Oklahoma approved a consent decree that bars the Lowes from ever exhibiting animals.

“The case against the Lowes marks the most aggressive civil enforcement action against an animal exhibitor in the history of the Animal Welfare Act," animal law attorney Carney Anne Nasser told National Geographic earlier this year.

“It is extremely uncommon for the DOJ to bring a case like this,” says Delcianna Winders, director of the animal law program at Vermont Law School. She says the justice department may have new priorities following the recent creation of its Animal Welfare Litigation Program under its environmental crime section, which is dedicated to enforcing federal laws relating to the “humane treatment of captive, farmed, and companion animals across the United States.”

Winders says she hopes it’s a sign that the justice department will “spring into action when people violate the law in ways similar to the Lowes,” and that “it will happen more quickly than after years of suffering.”

The Department of Justice did not respond to a request for comment.

Lowe considers the settlement agreement a win. “The DOJ had no option but to drop all charges against us,” he says. “That’s what happens when the evidence doesn’t support the allegations,” adding that “the DOJ was fed a pack of salacious lies to justify stealing my animals.”

As part of the consent decree, the civil charges will be dropped. The agreement reiterates the justice department’s allegations against the Lowes and does not prohibit the department from pursuing criminal charges.

The agreement also clarifies for the first time that the Animal Welfare Act—enforced by the U.S. Department of Agriculture and the nation’s only federal law protecting the well-being of wild animals displayed at zoos, aquariums, and circuses—explicitly applies to animals exhibited online for money.

In its case, the justice department cited the Lowes’ selling of shout-out videos on the online platform Cameo, an activity first reported by National Geographic. Today’s consent decree not only bars them from exhibiting animals again in a zoo setting but also expressly defines exhibition as occurring “through any other platform, including online for compensation in exchange for viewing the animals.”

“This is significant,” Winders says. “If someone else were to try to exhibit online without a license, the USDA or DOJ could swiftly enforce and say, here is the precedent. It’s unequivocal. There is no loophole.”

For 146 animals, a fresh start

In all, the Department of Justice confiscated 69 big cats, 11 ring-tailed lemurs, and 52 other animals, including primates, bears, wolves, raccoons, and kinkajous from the Lowes. The animals were sent to several sanctuaries, including Lions, Tigers and Bears, in California, and Turpentine Creek Wildlife Refuge, in Arkansas.

The Wild Animal Sanctuary, in Colorado, took in not only Mirage and Caesar but 79 other big cats and various other animals. Pat Craig, the sanctuary’s founder, visited the Lowes’ property several times during the past year to help remove animals.

“Animals were always underfed, and there were so many rotting piles of stuff,” he says. “A few cages were built right on dirt and sand, so animals had lots of sand in their feet. Lots of twisted legs and bone disease from a lack of calcium.”

Of those who survived, “mostly everybody was messed up” from malnutrition, Craig says. Mothers had ataxia—a neurological condition manifesting as lack of muscle control. Several white tigers have crossed eyes from inbreeding. Nonetheless, when they arrived at the sanctuary, most were “running, jumping, exploring, and having a ball,” he says. “I bet that’s the first time they ever ran in their life—those cages they were in were so tiny.”

Caesar and Mirage are thriving, Craig says. “They definitely would have had metabolic bone disease if we hadn’t gotten them out. And it’s really nice to know they missed all that cub petting.”

The Lowes continue to share photos and videos of their former animals on Instagram, where they have 90,000 followers, without acknowledging the confiscations. Meanwhile, Carole Baskin, the current owner of Greater Wynnewood Exotic Animal Park has just announced that she’ll be starring in her own reality show, which, she says, will document her efforts to reveal animal abuse at roadside zoos.