Magellan was first to sail around the world, right? Think again.

Five hundred years on, the explorer’s legacy is complicated—and contested.

In September 1519, Magellan set sail from Spain with five ships. Three years later only one ship, the Victoria (depicted on a 1590 map), made it back to Spain after circumnavigating the world.

Magellan was first to sail around the world, right? Think again.

Five hundred years on, the explorer’s legacy is complicated—and contested.

Five hundred years ago, Ferdinand Magellan began a historic journey to circumnavigate the globe. Simple, right? Not really— the explorer and his voyage are a study in contradiction. Magellan was Portuguese, but sailed on behalf of Spain. He was a formidable captain, but his crew hated him. His expedition was the first to sail around the world, but he didn’t end up circling the globe himself. His name wasn’t even Magellan.

Nonetheless, it’s clear that Ferdinand Magellan’s 1519 expedition changed the world forever. His journey was “the greatest sea voyage ever undertaken, and the most significant,” says historian Laurence Bergreen, author of Over the Edge of the World: Magellan’s Terrifying Circumnavigation of the Globe. “That’s not hyperbole.”

Brutal, bellicose, and brave, Magellan turned a commercial voyage into a hair-raising showdown with a wide world few Europeans could imagine. At the beginning of his journey, his contemporaries suspected it was impossible to sail around the entire globe—and feared that everything from sea monsters to killer fogs awaited anyone foolhardy enough to try. “It sounded suicidal to do this,” says Bergreen.

The Portuguese nobleman was born Fernão de Magalhães around 1480. As a page to queen consort Eleanor and Manuel I, he experienced court life in Lisbon. But the young man had a sense of adventure, and took part in a string of Portuguese voyages designed to discover and seize lucrative spice routes in Africa and India.

In 1519, Ferdinand Magellan set sail from Spain with five ships to find a western route to the Moluccas. Battling storms, mutinies, and the unknown, Magellan died before reaching his destination. One ship ultimately returned to Spain after circumnavigating the world.

The expedition sails through the newly

becomes the first Europeans to reach

The expedition makes landfall in Guam

Magellan is killed in a battle with locals.

the Moluccas, and eventually returns to

Spain with one ship.

After three years at sea, the one remaining 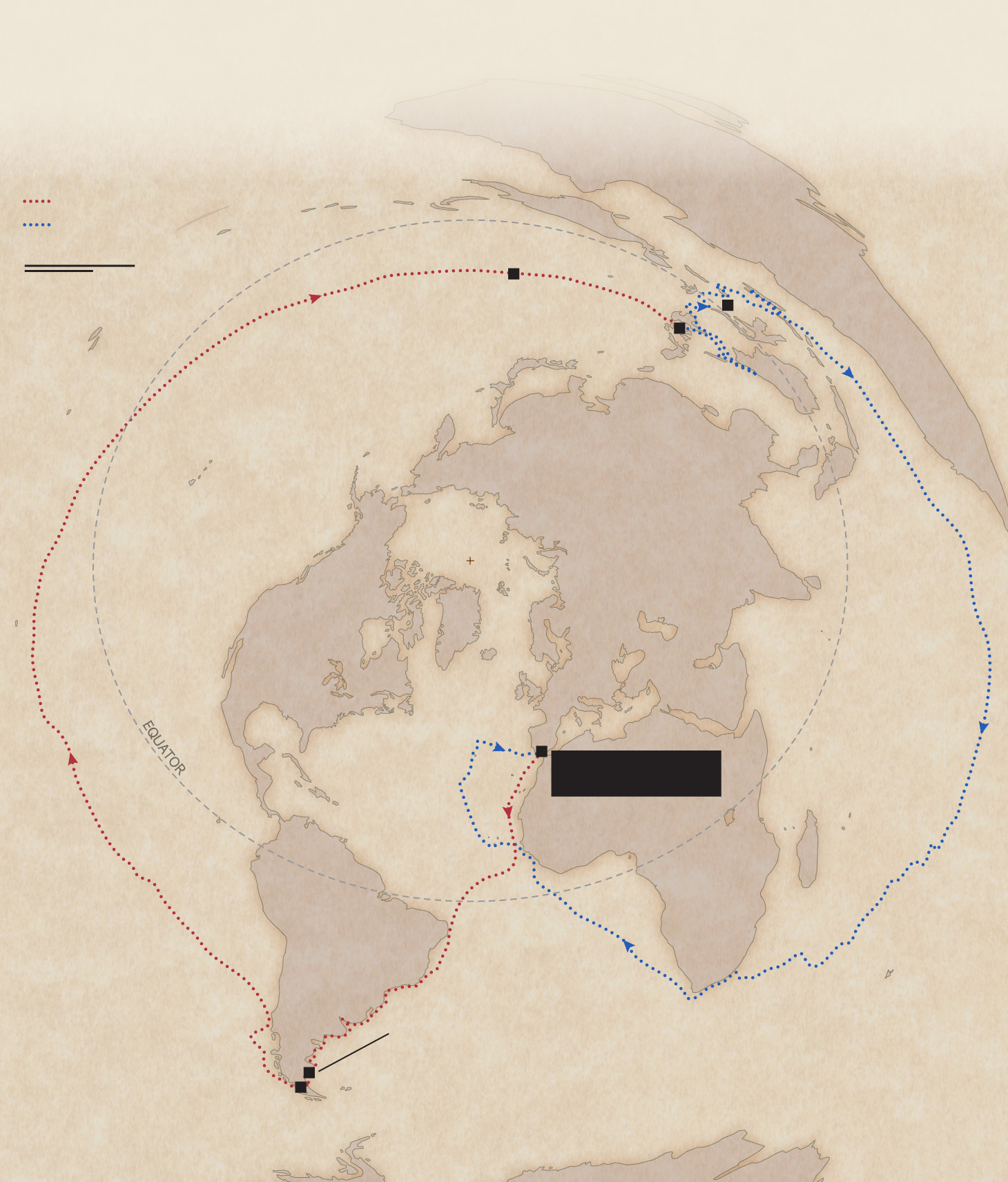 In 1519, Ferdinand Magellan set sail from Spain with five ships to find a western route to the Moluccas. Battling storms, mutinies, and the unknown, Magellan died before reaching his destination. One ship ultimately returned to Spain after circumnavigating the world.

two ships to the Moluccas,

and eventually returns to

Spain with one ship.

Magellan is killed in

the first Europeans to reach

The ships winter in

At the time, Portugal and Spain were involved in an intense rivalry to see who could find and claim new territory where they could source the spices coveted by European aristocrats. In 1505, Magellan joined the fight, traveling to India, Malaysia, and Indonesia. But his days in service to Portugal were numbered: He was accused of illegal trading and fell out with Manuel I, who turned down his proposal to locate a new spice route.

Magellan was convinced that by sailing west instead of east and going through a rumored strait through South America, he could map a new route to Indonesia and India. So he abandoned his Portuguese loyalty and headed to Spain, where he gained both citizenship and Charles V’s blessing for a five-ship journey westward.

The captain stood to gain great wealth and status from the trip: Charles gave him a decade-long monopoly on any route he might discover, a cut of the profits, and a noble title to boot. But he was in an awkward position when it came to his majority-Spanish crew and his royal mission. “The Castilians resented sailing under a Portuguese commander and the Portuguese considered him a traitor,” writes historian Lincoln Paine.

After winter weather forced his ships to wait for months in what is now Argentina, Magellan’s crew mutinied. One ship wrecked; another ditched the expedition altogether and headed back to Spain. The captain struggled to regain control of his men, but once he did, the repercussions were swift and harsh. He ordered some of the mutineers beheaded and quartered; others were marooned or forced into hard labor.

The voyage got back on track and Magellan managed to navigate a treacherous passage that’s now named in his honor—the Strait of Magellan. But his troubles weren’t over. As the crew forged across the Pacific Ocean, food spoiled and scurvy and starvation struck. Magellan and his men briefly made landfall in what was likely Guam, where they killed indigenous people and burned their homes in response to the theft of a small boat.

A month later, the expedition reached the Philippines. To the crew’s surprise, Enrique, an enslaved man Magellan had purchased before the journey, could understand and speak the indigenous people’s language. It turned out he was likely raised there before his enslavement—making him, not Magellan, the first person to circumnavigate the globe.

Magellan swiftly claimed the Philippines on Spain’s behalf, but his involvement in what Bergreen calls an “unnecessary war” was his undoing. “He wasn’t defeated by natural forces,” says Bergreen.

Instead, he demanded that local Mactan people convert to Christianity and became embroiled in a rivalry between Humabon and Lapu-Lapu, two local chieftains. On April 27, 1521, Magellan was killed by a poison arrow while attacking Lapu-Lapu’s people.

They “all at once rushed upon him with lances of iron and of bamboo,” wrote Antonio Pigafetta, an Italian scholar who accompanied the journey, “so that they slew our mirror, our light, our comfort, and our true guide.” The crew left his body behind—an indication, perhaps, of how they truly felt about their relentless leader.

After Magellan’s death, his crew continued in the single ship that remained, captained by Juan Sebastian Elcano, a Basque. They returned to Spain in September 1522. Along the way, they had encountered a new ocean, mapped new routes for European trade, and set the stage for modern globalism. Sixty thousand miles later, and after the death of 80 percent of those involved, the expedition had proven that the globe could be circumnavigated and opened the door to European colonization of the New World in the name of commerce.

A legend was born—and in 1989, one of Magellan’s namesakes even traveled to Venus. During a five-year-long journey, NASA’s Magellan spacecraft made images of the planet before burning up in its atmosphere.

But though Magellan’s name is associated with discovery by some, others shy away from that word. “When I write my textbook I will state that Magellan arrived in the Philippines in 1521,” says historian Ambeth Ocampo, former chairman of the Republic of the Philippines’ national historical commission. “Magellan should not be seen as the beginning of Philippine history but one event [in] a history that still has to be written and rewritten for a new generation.”

For the indigenous people encountered by Magellan and his crew, the explorer’s arrival heralded a new age of conquest, Christianization, and colonization. Lapu-Lapu, the Mactan ruler whose forces killed Magellan, is often credited with slaying the explorer. As a result, notes Ocampo, he has become a national hero in the Philippines.

Though Lapu-Lapu likely did not do the deed, he is widely commemorated as a symbol of Filipino resistance and pride. Now, historians are working toward a more accurate portrayal ahead of the 500th anniversary of Magellan’s arrival in the Philippines. The government’s quincentennial celebrations in 2021 will include replacing a 10-foot statue of Lapu-Lapu in the city that bears his name. A monument that shows the battle itself—and the group effort that brought down an epic explorer—will take its place.

Should Magellan be considered a hero, or what Ocampo calls the Philippines’ “first tourist”? As Guam, the Philippines, Spain and even Portugal celebrate and question the quincentennial, the explorer’s legacy remains as complicated as ever.