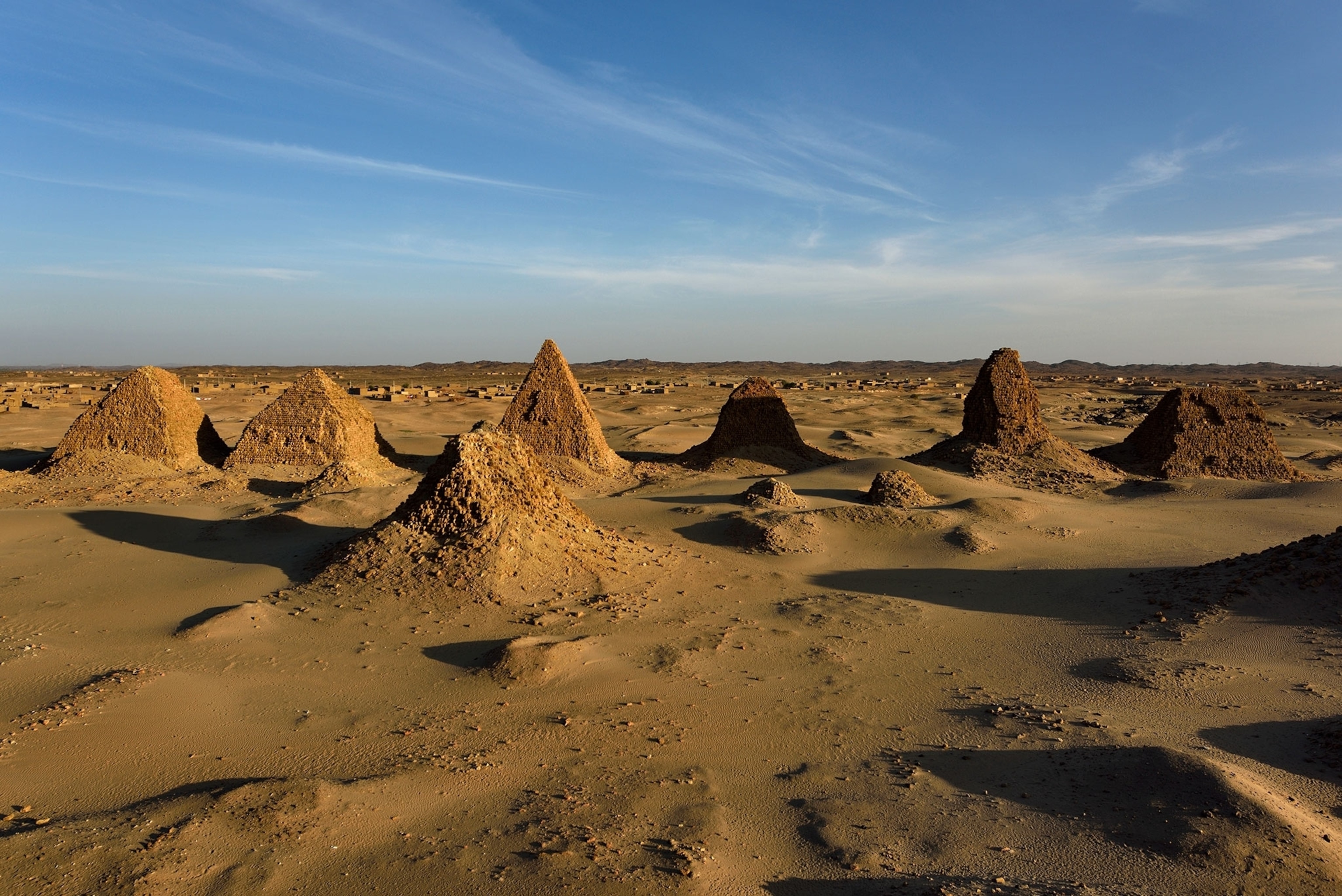 Dive beneath the pyramids of Sudan's black pharaohs

The 2,300-year-old royal tomb of a Kushite king appears nearly untouched—and submerged in rising groundwater. What’s an archaeologist to do?

Somewhere below the surface of the kiddie-pool sized patch of brown water is the entrance to the 2,300-year-old tomb of a pharaoh named Nastasen. If I crane my neck back far enough, I can just make out the eastern flank of his pyramid rising nearly three stories above me.

It’s a sweltering morning in the desert of northern Sudan, the land of Nubia in the time of the pharaohs. Sweat drips into the dive mask hung around my neck as I negotiate my way down a narrow, ancient staircase cut deep into the bedrock. Waterproof flashlights clank from each wrist, and a 20-pound weight belt is slung commando-style across my chest. An emergency container of air, no bigger than a can of hairspray, is secured uncomfortably in the small of my back.

At the bottom of the stairs, archaeologist and National Geographic grantee Pearce Paul Creasman is standing chest-deep in the muddy water. “It’s really deep today,” he warns. “There’s not going to be any headroom in the first chamber.”

Exclusive: Dive inside the burial chambers of Sudan’s royal pyramids

It’s the first time underwater archeology has been attempted in the country.

Creasman and I both trained as underwater archaeologists, so when I heard that he had a grant to explore submerged ancient tombs, I gave him a call and asked to tag along. Just a few weeks before I arrived, he entered Nastasen’s tomb for the first time, swimming through the first chamber, then a second, then into a third and final room, where, beneath several feet of water, he saw what looked like a royal sarcophagus. The stone coffin appeared to be unopened and undisturbed.

For more on diving under a pyramid check out our podcast, “Overheard at National Geographic.” Listen here.

Now, Creasman disappears into the water and resurfaces with a steel grate used to seal the tomb entrance. It looks no bigger than a large television set.

“This is how big the chute is,” he announces. “That’s your only space to get in and out of the tomb.”

Back-mounted scuba tanks are too unwieldy in such tight confines, so we clip into 150-foot-long hoses that will supply us with air from a noisy, gasoline-fed pump.

“I’ll go first and pull my hose in,” Creasman says. “If I don’t see you in five minutes, I’ll come find you.”

I nod and turn back to look up the ancient staircase, where Fakhri Hassan Abdallah, an inspector with Sudan’s National Corporation for Antiquities and Museums, stands silhouetted against the rising sun. He gives me a thumbs up and smiles. I shove the diving regulator into my mouth. It’s time to go pyramid diving.

The pyramids of Nuri

Nastasen’s watery tomb is located at the ancient site of Nuri, which sprawls across more than 170 acres of sand near the east bank of the Nile River in northern Sudan. Seen from the sky, its most commanding feature is an arc of some 20 pyramids built between 650 B.C. and 300 B.C. that appear strung together like gems on a delicate necklace.

These pyramids mark the burials of Kushite royals, the “black pharaohs” who operated as vassals on the gold-rich southern edges of the Egyptian empire, but who emerged as a force of their own during the political chaos that followed the demise of the New Kingdom. From about 760 B.C. to 650 B.C., five Kushite pharaohs ruled all of Egypt from Nubia to the Mediterranean Sea, embarking on ambitious building programs up and down the Nile and reviving the religious practices of a much earlier Egyptian empire—including the construction of pyramids, which they buried their kings under.

The largest and oldest pyramid at Nuri belongs to its most famous resident: the pharaoh Taharqa, a Kushite king who in the seventh century B.C. rallied his troops to the northern edges of his empire to defend Jerusalem from the Assyrians, earning him a mention in the Old Testament. George Reisner, a Harvard Egyptologist, visited Nuri a century ago to excavate the burial chambers beneath Taharqa’s massive pyramid.

For more information and updates on archaeology at Nuri, visit the official expedition website at nuripyramids.org.

Reisner’s team also mapped Nuri’s funerary monuments, which include more than 80 royal Kushite burials—roughly a quarter of which are topped with their sandstone pyramids. His field notes show that many of the tombs he encountered were already inundated with groundwater percolating from the nearby Nile, making traditional dirt excavation unsafe or impossible.

Reisner never published the results of his work (an associate cobbled what little was documented into a report published in 1955), and for almost a century Nuri was ignored. The Harvard archaeologist had offhandedly—and inaccurately—dismissed the Kushite kings as racially inferior and their accomplishments as an inheritance of older Egyptian traditions.

Then, in 1922, the discovery of Tutankhamun’s tomb shifted the public’s attention to the Valley of the Kings, nearly 500 miles up the Nile in Luxor. In the decades that followed, Nuri seemed too big and challenging a site to tackle. Many of its tombs were likely underwater, and no one had ever before attempted underwater archaeology in Sudan. Besides, northern Sudan—ancient Nubia—had plenty of other stunning sites to keep archaeologists busy for years to come.

Pearce Paul Creasman first visited Nuri in 2018. An unusual hybrid of Egyptologist and underwater archaeologist (as well as an associate professor in the dendrochronology laboratory at the University of Arizona), Creasman saw a rare opportunity to explore the watery tombs that Reisner was unable to tackle a century ago.

Funded in part by a grant from the National Geographic Society, Creasman zeroed in on the pyramid of Nastasen, a minor pharaoh who ruled Kush from 335 B.C. to 315 B.C. Because he was the last king buried at Nuri, his pyramid was built on the worst piece of real estate in the lowest elevations of the royal necropolis. If Reisner’s reports about the flooded tombs were true, Creasman reasoned, an exploration of pharaoh Nastasen’s final resting place would be the best way to gauge how inundated these monuments might be in the 21st century.

According to Reisner’s century-old field notes, his team located and excavated the rock-hewn stairwell that led down to the burial chambers deep beneath Nastasen’s pyramid. One of Reisner’s workers entered the tomb and, likely unnerved by the knee-deep water, hastily made his way to the third and final chamber. There he dug a small pit in the corner and collected a handful of shabtis—small magical figurines tasked with tending to the deceased’s needs in the afterlife. The research team left Nuri, and over the decades Nastasen’s tomb, and the staircase leading to it, were again buried under the desert sands.

Creasman’s team spent the 2018 field season and part of the 2019 season digging out the staircase. They reached the opening of the tomb this January and discovered that the entrance was now completely underwater, most likely due likely due to rising groundwater caused by natural and human-induced climate change, intensive agriculture near the site, and the construction of modern dams along the Nile.

By the time I arrive at Nuri, Creasman has reinforced the narrow tomb opening with a steel chute to prevent a rock collapse that would trap divers in the chambers beneath the pyramid. I pull myself through the chute and into the first chamber. As Creasman had warned, the water reaches to the ceiling. Every movement kicks up a cloud of ultra-fine sediment that makes it almost impossible to see what’s directly in front of me.

I feel my way around the bus-sized chamber, swimming in circles until I eventually surface in the second chamber. There, the ceiling has collapsed, creating space for a large air pocket. I find Creasman hoisting bags of gear onto a pile of dry rubble and placing flashlights into plastic jerry cans that gently bob in the water and illuminate the darkness. Empty Red Bull cans serve as floats for a safety line that runs from the back of the tomb to the entrance.

Swimming through a low, rounded, rock-cut doorway, we enter the third chamber. The stone sarcophagus is dimly visible below us—a thrilling sight—and we spot the pit that was hastily dug by Reisner’s nervous worker a century ago. At this early phase of the project, Creasman’s objectives are to demonstrate the safety of the air-supply system, gather basic measurements, and thoroughly excavate “Reisner’s pit” to see what was overlooked. Peering inside the stone coffin will have to wait until next year.

But there are tantalizing clues that the rising groundwater kept grave robbers from looting Nastasen’s tomb. As we excavate Reisner’s pit—filling plastic buckets with sediment, swimming them out into the air-filled second chamber, dumping the sediment onto a screen and sifting for artifacts—we discover paper-thin foils of pure gold that likely once covered precious figurines that long ago dissolved in the water. Those gilded figurines would have been easy pickings for looters, and their remains are a sure sign that Nastasen’s tomb has been essentially untouched.

On our final dive, Creasman and I float silently in water in the back chamber of the tomb, hovering above what may very well be Nastasen’s undisturbed sarcophagus. We talk about the team’s goal for 2020: to excavate the pharaoh’s 2,300-year-old submerged royal burial chambers. It’s an audacious aim and a huge logistical challenge, but Creasman is optimistic.

“I think we finally have the technology to be able to tell the story of Nuri, to fill in the blanks of what happened here,” he says. “It’s a remarkable point in history that so few know about. It’s a story that deserves to be told.”

Black Pharaohs: Sunken Treasures premieres this Wednesday, July 3 at 10 pm EST on the National Geographic Channel.
This story was updated to reflect Creasman's position at the University of Arizona.