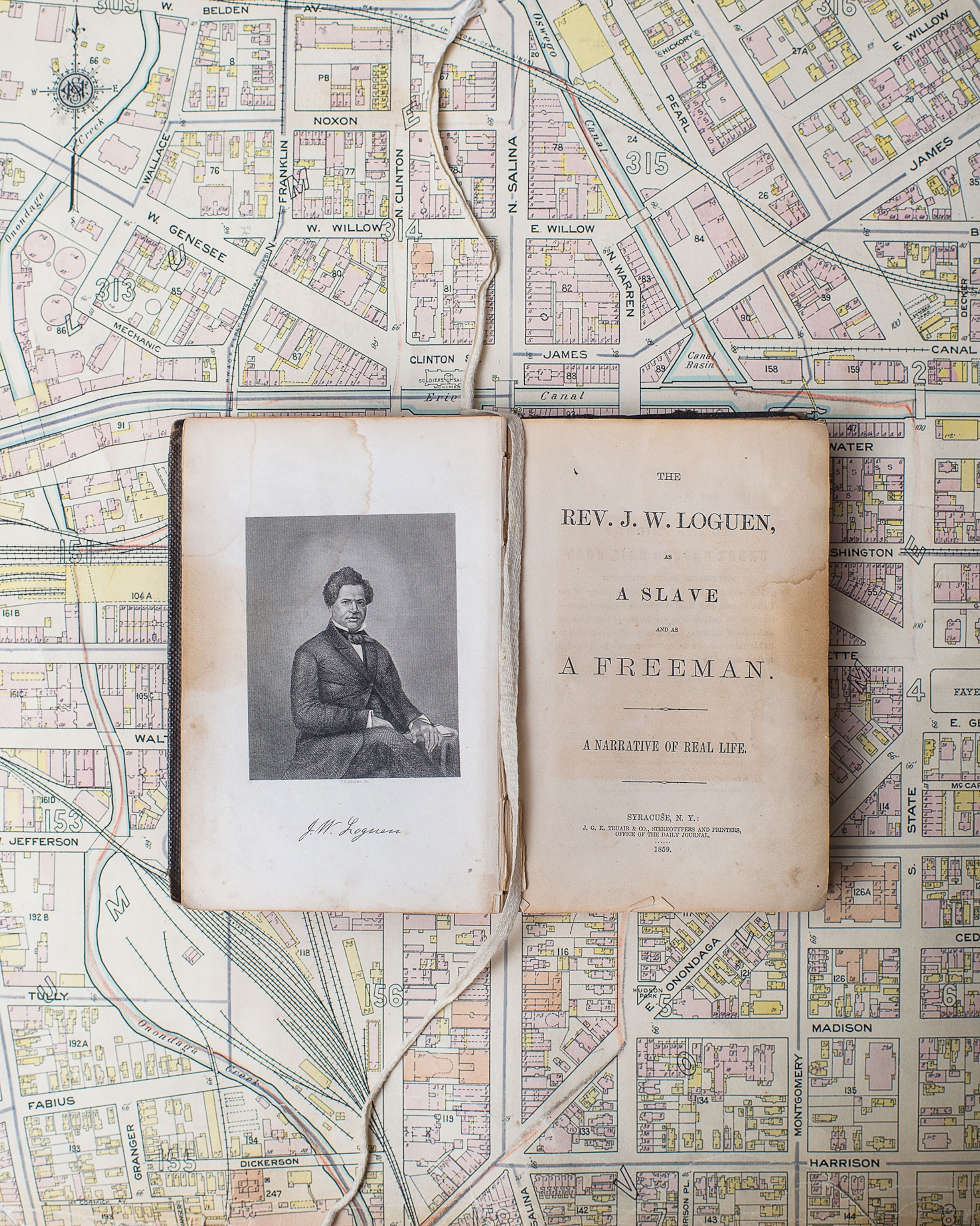 An image of the Rev. Jermain Wesley Loguen adorns the inside cover of the slave narrative, "The Rev. J.W. Loguen, as a slave and as a freeman : a narrative of real life, 1859" from the private collection of the Onandoga Historical Association archive. Loguen was a highly regarded abolitionist and leader in the African Methodist Episcopalian Zion church. Known as the “Underground Railroad King,” he helped more than 1,500 fugitives escape slavery.
Photograph by Nicola Lo Calzo

A mere mention of Harriet Tubman or Fredrick Douglass conjures up images of former slaves, abolitionists and the struggle for freedom for enslaved Africans. Both New York residents, Tubman was from Auburn and Douglass from Rochester, they directed thousands of slaves to freedom.

But less is widely known about the role central New York played in creating the “underground railroad,” a network of safe houses and routes, from points in the southern United States to the country’s northern borders, used during the 1800s to get runaway slaves to freedom in free states and Canada.

Curator of history for the Onondaga Historical Association, Robert Searing, says Syracuse, New York became the “great central depot” of the Underground Railroad largely due “to the intellectual and religious changes sweeping through what was then a system of villages until the city was incorporated in 1848.”

Syracuse had long been a hub of anti-slavery activity. Even before the 1840s Syracuse had an active “vigilance committee” fighting against the re-enslavement of runaways. The large salt production in the area brought settlers from Northern cities to work and trade along the Erie Canal. At one point 90 percent of the nation’s salt came from Syracuse. The canal brought tradesmen, itinerant workers, day laborers and African Americans both free and fugitive to the area. The diverse cluster of travelers revealed revolutionary ideas about living in America following the Civil War.

Methodist and Wesleyan ministers traveling the Erie Canal preached slavery as an abomination. Religious leaders believed “This issue of chattel slavery is untenable if we are all made in God’s image, and so, how can we enslave others?” Searing says.

By 1845 the Rev. Jermain Loguen, often called the “Underground Railroad King,“ arrived in Syracuse. Loguen placed notices in local newspapers announcing himself as a station master on the Underground Railroad, inviting runaway slaves to find sanctuary at his home in the 1400 block of East Genesee Street. “Reverend Loguen was firm in his conviction and position and did not care he was breaking the law,” Searing says.

In fact, Loguen and some 2,000 citizens, white and black, staged a courageous anti-slavery act with the “Jerry Rescue” in 1851. They stormed the police station near Clinton Square to free William “Jerry” Henry in defiance of the Fugitive Slave Act—where governments by law were expected to return and could not interfere with others returning runaway slaves to their owners. William “Jerrry” Henry made it safely to Kingston, Ontario Canada; he died a free man a few years later.

“Clinton Square today has a beautiful and powerful bronze monument of the rescue of William “Jerry” Henry, a 3D image of Jerry breaking out of his shackles,” Searing says.

The “Jerry Rescue” monument, erected in the 1990s, is among a handful artifacts and locations still intact connecting the city of Syracuse to its abolitionist past. As curator of history for the historical association Searing gives tours of downtown Syracuse and the “Jerry Rescue” monument. There about a dozen Underground Railroad related sites in the city, although Searing laments, “A lot of places are gone, like the home where Harriet Powell was housed.”

Across central New York, community members work to keep stories of the region’s history alive. Ask about Harriet Powell, and her mark on history, to any passerby, and no doubt the reaction is a puzzling stare.

Powell’s story brings together several prominent people in central New York—all associated in some manner with the Underground Railroad. News spread about Harriet Powell’s escape back in 1839 and thus, elevated Syracuse’s profile for anyone seeking freedom.

In 2018, the Onondaga Historical Association, partnered with the local theater company Syracuse Stage to commission a play, “Possessing Harriet”, part of the association’s commitment to preserving and retelling the stories of the Underground Railroad and Syracuse’s place in the African American struggle for freedom.

Written by Kyle Bass, the play centers around a conversation slave Harriet Powell has with Elizabeth Cady Stanton while Harriet is hidden away in the home of an abolitionist. Searing is still excited about the play’s accomplishments.

“A record number of school groups and adults came out to see the play and were moved by the story on many, many levels. The reactions were incredible.”

“She was a slave that looked white—a quadroon. Her master Davenport put out a return flyer for $200. Famed abolitionist Gerrit Smith helped in her escape, getting her to Peterboro, New York. There she meets Elizabeth Cady Stanton before she (Elizabeth) becomes a leading suffragette. Then she gets safely to Kingston, Ontario, Canada and lives a long life.”

Across the region there are symbols of Syracuse’s role in the Underground Railroad. From the original Wesleyan Methodist Church, the Onondaga Historical Association has created casts of molds from excavated faces found carved into the walls of the church basement. It is believed the faces were created by slaves predating the 1880s. Two molds remain on display at the historical association.

Syracuse often is considered the gateway to freedom given its close proximity to the Canadian border although midwest territories like Ohio received many runaways along the Underground Railroad’s borderland—areas bordering slave and free states. “Black men came to Ohio, stayed and worked to buy freedom for their families even though they could not vote, had no rights and could not compete for jobs white men had,” says, Carl B. Westmoreland, senior historian at the National Underground Railroad Freedom Center in Cincinnati, Ohio.

By 1830 Cincinnati was America’s 6th largest city (larger than Chicago and St. Louis) given its position on the Ohio River. “Most of the waiters and service people working the 300 or more paddle boats in the 1830’s and 40’s on the Ohio River were black. They were helpful in hiding fugitives away. Since work was segregated by race, blacks worked independently and thus “ordinary white folks had no idea what was going on below deck.”

“What most people don’t acknowledge or understand is the Underground Railroad was initiated by black people in southern states,” who in many cases despite their own enslaved status helped others across the border to freedom in “northern states."