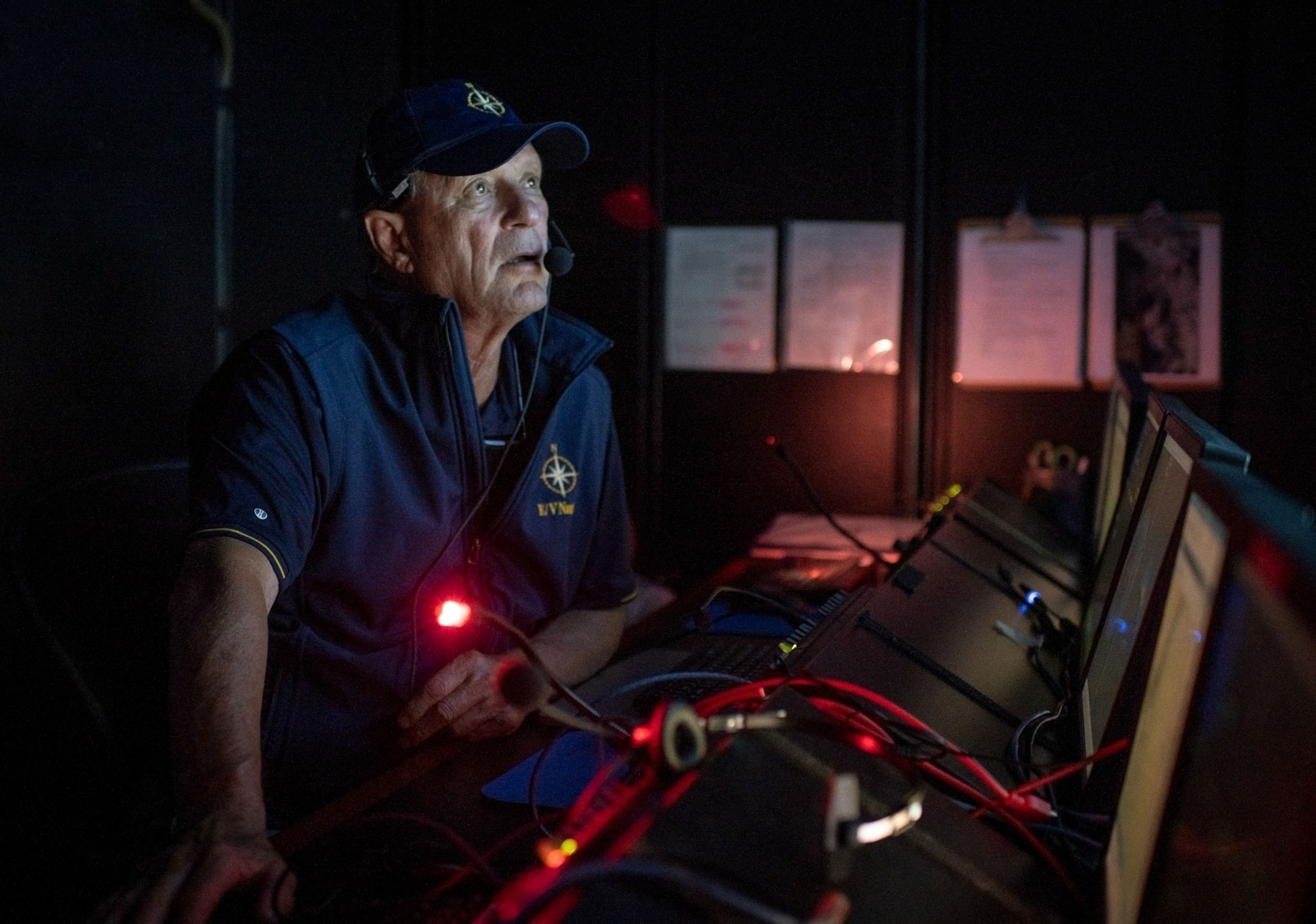 Exclusive: Inside the search for Amelia Earhart’s airplane

Many attempts have been made to discover the famed aviator's fate, but never with the technological tools at Robert Ballard's disposal.

NIKUMARORO, KIRIBATIIt’s a balmy tropical night south of the equator in the Pacific Ocean, but inside the control room of the E/V Nautilus it’s cold and dark and hushed. Banks of monitors provide the only light. Moving around is treacherous—wires hang along the walls and the space between work stations is narrow. Despite the heat outside, crew members wear fleece to fend off the frigid air. Their voices are barely audible as they speak softly to each other through headsets.

The screens mounted on the black-painted walls provide a vision of another world. One shows a remotely operated vehicle (ROV) floating in shadowy blue light, dwarfed by what looks to be a massive cliff face. Another screen provides a closer view—bedrock and coral rubble occasionally obscured by a flurry of marine snow.

“We’re looking for colors that aren’t natural to the background,” says Robert Ballard, as he stares intently at the screens from his perch in the back row. The man who found the Titanic is on a mission to find out what happened to Amelia Earhart when she disappeared during her quest to be the first woman to fly around the world.

Earhart would likely have been enraptured by the ship’s space-age display. The aviator always had her eye on the future, whether it was records to be broken in the skies or new paths to be forged by women. She even ventured underwater in an early version of a diving suit.

Yet she would have been astonished at the technological wonders being marshaled to discover her fate.

Ballard has directed his state-of-the-art ship, the E/V Nautilus, to the waters off Nikumaroro, an isolated ring of coral and sand surrounding a turquoise lagoon. Only four and a half miles long and one and a half miles wide, the island appears on most maps as a mere speck in the vast Pacific Ocean.

“There are various theories about where Amelia’s plane landed, and some of them are a little wild,” says Ballard, a National Geographic Explorer. Some people believe Earhart and navigator Fred Noonan ended up in the Marshall Islands, some say Saipan or even New Jersey, others that the plane crashed and sank. “We’re going with the one that she actually landed.”

On July 2, 1937, Earhart and Noonan were aiming for Howland Island, which is even smaller than Nikumaroro. After taking off from Lae, New Guinea, on the third to last leg of Earhart’s attempt to circumnavigate the globe, they failed to locate Howland and vanished without a trace.

The International Group for Historic Aircraft Recovery (TIGHAR) has spent the last several decades investigating the hypothesis that Earhart and Noonan landed their Lockheed Electra 10E on Nikumaroro when they couldn’t find Howland.

The researchers base their hypothesis on Earhart’s last radio transmissions. At 8:43 a.m. on July 2, Earhart radioed the Itasca, the U.S. Coast Guard cutter awaiting Earhart at Howland: "KHAQQ [the Electra's call letters] to Itasca. We are on the line 157 337." The Itasca received the transmission but couldn't get any bearings on the signal.

The “line 157 337” indicates that the plane was flying on a northwest to southeast navigational line that bisected Howland Island. If Earhart and Noonan missed Howland, they would fly either northwest or southeast on the line to find it. To the northwest of Howland lies open ocean for thousands of miles; to the southeast is Nikumaroro.

The line-of-position radio message was the last confirmed transmission from Earhart, but radio operators received 57 messages that could have been from the Electra. Wireless stations took direction bearings on seven of them. Five of those crossed near Nikumaroro, then called Gardner island.

The TIGHAR researchers theorize that Earhart and Noonan radioed at night to avoid the searing daytime heat inside the aluminum plane. Eventually the tide lifted the Electra off the reef, and it sank or broke up in the surf. The last credible transmission was heard on July 7, 1937.

Members of TIGHAR have traveled to the island 13 times, but never with the technological tools that Ballard has at his disposal. The Nautilus is equipped with a multi-beam sonar on the hull, two ROVs with high definition cameras, an autonomous surface vehicle (ASV), and multiple drones—plus Ballard’s years of experience finding treasures under the sea.

On this expedition he’s aiming to discover where Earhart’s plane ended up after it tumbled off the reef.

It’s painstaking work. The Nautilus didn’t approach the island directly but took a sweeping path that allowed the sonar to map the underwater terrain. But the ship couldn’t get too close; the reef is extremely dangerous, as demonstrated by the wreckage from the S.S. Norwich City that still dominates the northeastern shore of the island.

Once the Nautilus arrived at the island, a routine quickly developed: Send out the ASV (essentially a robot boat) to map the terrain near the surf. When it returns, analyze the data to see what, as Ballard puts it, “comes out of the soup.” Ballard and his colleagues are looking for targets—anomalies—though a lack of them doesn’t mean nothing interesting lies below the waves.

Ballard puts great stock in laying eyes on his quarry. “Everything I ever found was found visually,” he says.

That’s where the ROVs come in. Usually launched at night, they can go as deep as 4,000 meters. Hercules, a bright yellow box with a metal base, offers the first-person view, while smaller Argus keeps a camera pointed at Hercules.

The ROV pilots operate on four-hour shifts day and night, and mostly they don’t see much. But on the first night they found wreckage—items that looked to be a propeller, a boiler, a crank shaft, and much more—all from the Norwich City.

It wasn’t the wreck Ballard was looking for, but it answered an important question: How deep could the plane go? The Norwich City debris clustered at depths between 100 to 300 meters. “Anything of similar mass—part of a plane or part of a ship—would have been sliding down slope in that zone,” explains expedition leader Allison Fundis. “We’re really focusing on that zone with the ROV dives.”

When the pilots do spot something, their reactions tend to be muted (unless it’s a charismatic creature such as a dumbo octopus). During a recent watch a tube-shaped metallic object hove into view. The Hercules pilot murmured, “It looks anthropogenic. Should I pick it up?”

The answer was yes. After a moment of hesitation, Hercules stretched out its arm and very slowly closed its pincers around the tube and delicately placed the item into a white storage container on its side.

What was it? The answer would have to wait until the ROVs were recovered and the box could be opened, which wouldn’t be until the next day.

Spoiler alert: It was not part of Earhart’s plane. Instead, it appeared to be a piece of oceanographic equipment—a sign that other explorers had been here before Ballard.

Ballard shrugs off false alarms, especially this early in the search. “We did this nine days for the Titanic,” he says.

Amelia Earhart had planned to use her Electra to test the latest in aviation equipment—even nicknaming it the “Flying Laboratory.” By the end of this expedition to find the pilot and her plane, the Nautilus’s equipment will be tested to the limits, and the small island of Nikumaroro will be thoroughly mapped. Whether her fate is discovered or not, maybe Earhart would be satisfied with that result.