A combination of technology and social pressure drove us toward sanitary products shot through with plastic. Is there a better solution?

Tampon applicators are almost always made from plastic. Some companies make applicator-free tampons.

A combination of technology and social pressure drove us toward sanitary products shot through with plastic. Is there a better solution?

Plastic pervades modern life, and menstruation is no exception. Since the middle of the 20th century, many tampons and menstrual pads have contained somewhere between a little and a lot of plastic in their basic design—sometimes for reasons that “improve” the design, but often for reasons less crucial.

Getting a handle on how much plastic waste comes from menstrual products is tough, in part because it’s labeled as medical waste and does not need to be tracked, and in part because so little research has even looked at the scope of the problem. But rough estimates for the likely output are staggering: In 2018 alone, people in the U.S. bought 5.8 billion tampons, and over the course of a lifetime, a single menstruator will use somewhere between 5 and 15 thousand pads and tampons, the vast majority of which will wind up in landfills as plastic waste.

To dislodge plastic from menstrual care, though, will take more than design disruption, because the reasons plastic has lodged itself so deep in the design in the first place are tangled in a web of culture, shame, science, and more.

Most American women will menstruate for about 40 years in total, bleeding for about five days a month, or about 2,400 days over the course of a lifetime—about six and a half years, all told.

All that menstrual fluid has to go somewhere. In the U.S., it usually ends up in a tampon or on a pad, and after their brief moment of utility, those products usually end up in the trash.

The most common menstrual products are a veritable cornucopia of plastic. Tampons come wrapped in plastic, encased in plastic applicators, with plastic strings dangling from one end, and many even include a thin layer of plastic in the absorbent part. Pads generally incorporate even more plastic, from the leak-proof base to the synthetics that soak up fluid to the packaging.

For Ann Borowski, who researched the ecological impact of sanitary products, the sheer numbers were astounding.

“I don’t want to contribute 40 years of garbage to a landfill just to manage something that shouldn’t even be seen as a problem,” she says. “It seems like something we should have a little more control of by now. I don't want to have that kind of burden on the planet.”

A brief history of menstrual management

In ancient Greece, menstrual blood was seen by the writers of the time as something fundamentally insalubrious, a symbol of female excess, a “humor” that needed to be expelled from the body in order to maintain balance and health. The blood itself was considered unhealthy—even poisonous. That general attitude persisted for centuries.

By the mid-1800s in the U.S., the culture around menstruation had hardened into a simple narrative: Period blood was perceived as “bad blood,” both dirty and shameful, says Chris Bobel, an expert on menstruation at the University of Massachusetts, Boston.

Colorado-based general practitioner Earle Cleveland Haas patented the first tampon with applicator in 1933. By the time dome-tipped plastic applicators were introduced in 1973, tampons were used by more than 70 percent of U.S. women.

Although plastic applicators are recyclable, they are usually not accepted for sanitary reasons.

Tampons flushed down the toilet can end up in the ocean when sewer systems fail. 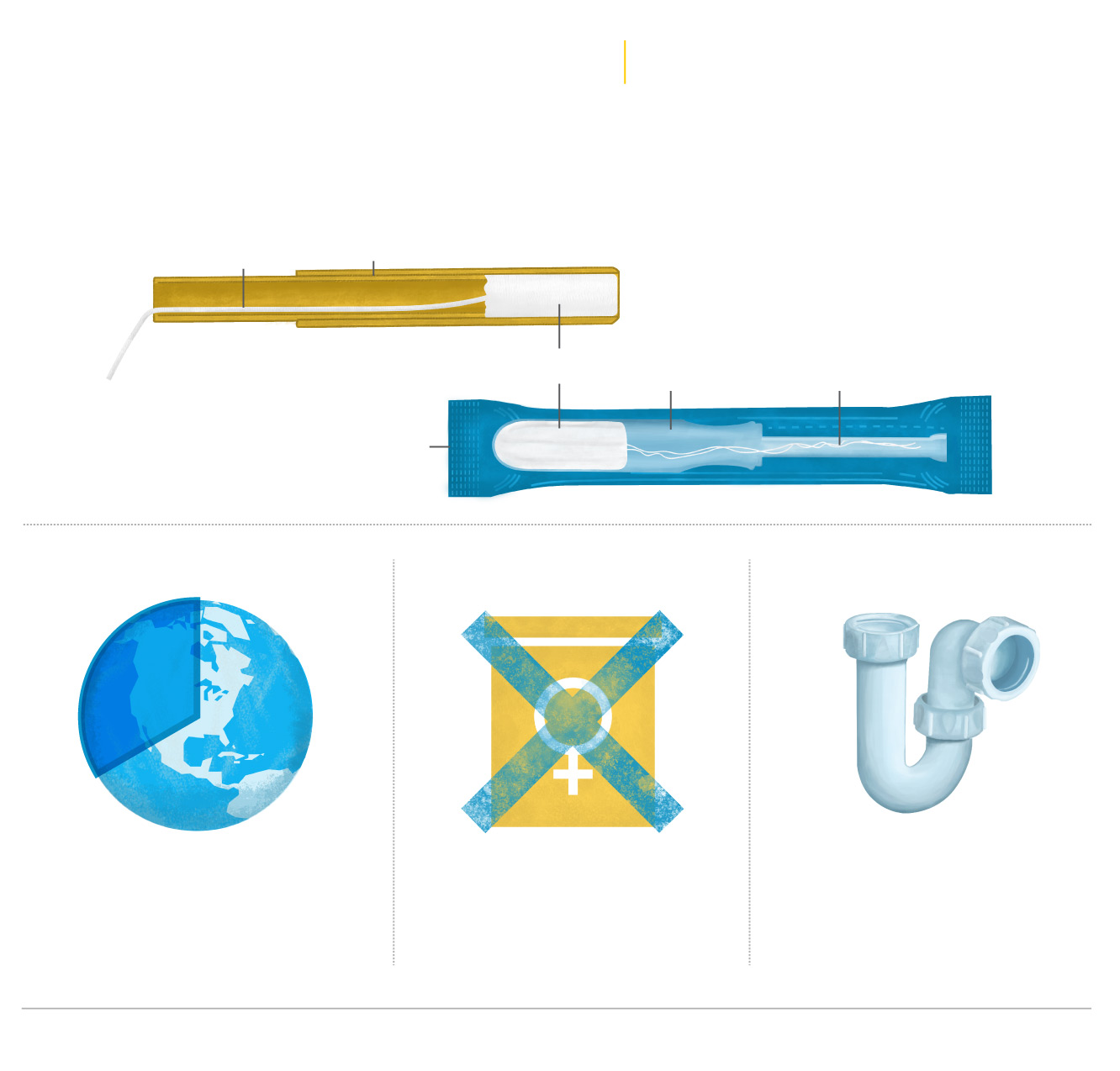 Colorado-based general practitioner Earle Cleveland Haas patented the first tampon with applicator in 1933. By the time dome-tipped plastic applicators were introduced in 1973, tampons were used by more than 70 percent of U.S. women.

Although plastic applicators are recyclable, they are usually not accepted for sanitary reasons.

Tampons flushed down the toilet can end up in the ocean when sewer systems fail.

But menstruation was an unavoidable reality that had to be dealt with. Women in the pre-20th century U.S. used a “bricolage” approach to managing it, repurposing all sorts of commonplace items into pad- or tampon-like objects, historian Susan Strasser explains. That meant leftover scraps of fabric, soft strips of bark, or whatever else was available and absorbent. But the tools left much to be desired. They were often bulky and unwieldy, and they had to be washed and dried—which meant they would be displayed publicly, a less-than-desirable situation in a culture that stigmatized menstruation.

In 1921, the first pack of Kotex crossed a drugstore counter. Thus began a new era: that of the disposable menstrual product.

Kotex were made with Cellucotton, a hyper-absorbent plant-based material that had been developed during World War I for use as medical bandaging. Nurses started to repurpose the material for menstrual pads, and the practice stuck.

Some physically active menstruators, like dancers and athletes, gravitated toward another emerging product: tampons. The tampons of the 1930s were not too different than the ones on drugstore shelves today, generally made of a wad of dense cotton or a paper-like material attached to a string.

What all of the new products had in common was disposability. Marketing campaigns leaned into the idea that the new products would make menstruators “happy, well-poised, efficient modern women,” free from the tyranny of old “makeshift” strategies. (Disposables also meant that menstruators would have to stock up each month, locking them in to decades of purchases).

“From the beginning, the companies pushed this idea that the way to be modern was to use these new disposable products,” says Sharra Vostral, a historian at Purdue University.

The appeal and ubiquity of disposables grew as more women entered the workforce. The products offered both convenience—they were readily available in many drugstores—and discretion—women wouldn’t have to worry about bringing used cloths from work to home. It also allowed menstruators to “pass,” hiding their bodily functions from those around them, letting work continue uninterrupted.

“This has been the standard,” says Bobel, “that women and girls always have to bend to norms and standards of the workplace, to be hyperefficient at all times. You can't let your body slow you down, is the message.”

The outcome was a massive shift in the market. By the end of World War II, sales of disposable menstrual products had quintupled across the U.S.

What’s plastic in a pad?

By the 1960s, chemists were busily developing sophisticated plastics and other synthetics. The technologies leapt forward so quickly that manufacturers found themselves searching for new markets into which they could incorporate their new materials.

One of the markets they found was menstrual products.

Pad designs began to incorporate thin, flexible, leak-proof polypropylene or polyethylene as the base (or, in patent terms, the “backsheet”). Advances in sticky-stuff technology bolstered the use of flexible plastics, allowing the pads to be attached to underwear directly rather than hanging off a complicated, bulky belt system. By the late 1970s, designers realized they could make flexible plastic “wings” that would wrap around underwear and anchor a pad in place. And designers found ways to weave thin polyester fibers into the squishy part of the pad to wick fluid away into the absorbent cores, which were getting thinner as superabsorbent materials grew more sophisticated.

All these product developments sound incremental, says Lara Freidenfelds, a historian who interviewed dozens of women about their experiences with menstruation for her book The Modern Period, but they add up to big changes in experience.

“Adhesive or wings—those sound like a minor product improvements, but actually people talked about them being really important. Like, wow, that was a big one, that really improved my life,” she says.

In the early part of the 20th century many doctors, as well as members of the public, were squeamish about the idea that women—especially young women—might come into contact with their genitals during tampon insertion, says Elizabeth Arveda Kissling, a gender studies expert at Eastern Washington University and author of Capitalizing on the Curse: The Business of Menstruation.

Maybe, inventors thought, the tampon could be inserted more “demurely” and hygienically with an applicator.

The first recorded U.S. patent for tampons, from 1929, included a design for a telescoping cardboard applicator tube. Others suggested stainless steel or even glass. By the 1970s, plastics could be molded into smooth, thin, flexible rounded shapes—perfect, some designers thought, for tampon applicators.

But it’s not just the applicator that’s plastic: many tampons incorporate some bits of plastic in the absorbent part itself. A thin layer often helps hold the tightly-packed cotton part together. In some cases, the string is made of polyester or polypropylene.

By the middle of the century, the major players in the U.S. menstrual products market were competing fiercely for customers but running out of technological advances to trumpet. To stand out, companies came up with more and more ways to offer their customers discreet purchase, use, and disposal options.

An obsession with discretion was longstanding. In the 1920s, Johnson and Johnson printed slips in their magazine advertisements for their “Modess” brand sanitary napkins. Women would cut them out and hand them silently across the pharmacy counter, receiving a nearly unmarked box in return.

But as the tide turned toward disposable, portable products, and as the products themselves shrank in size, the packaging focus shifted toward individual wrapping. Menstruators needed to be able to throw products in a bag and keep them clean, to carry them from desk to restroom, and then from restroom stall to waste container.

That meant plastic wrapping for everything. In 2013, the discreet packaging projects hit their heights when Kotex introduced a tampon with a “softer, quieter wrapper to help keep it secret,” designed for silent unwrapping. And disposal? There are plastics to help with that part of the process, too. In some public restrooms, little packets of scented plastic baggies sit on the bathroom stall walls, ready to enclose and disguise used sanitary products on their short path from stall to trash bin.

Is the future plastic?

The new plastic-packed versions of both tampons and pads vastly improved many women’s experience with their periods. But they also got generations of women and other menstruators hooked on plastic-centric products that will live on for at least 500 years after their brief usefulness has passed.

It doesn’t necessarily have to be this way. In Europe, most tampons are sold without applicators. In the U.S., there’s growing interest in alternatives: In a recent survey, almost 60 percent of the women questioned were considering a reusable product (about 20 percent were currently users).

“That’s a tectonic shift in the way women are thinking about managing their periods,” says Susannah Enkema, a researcher at the Shelton Group who worked on the survey.

One of the popular alternatives is the reusable pad, a better-designed version of a very old technology. Others have embraced menstrual cups, another old technology that has recently seen a resurgence in popularity. Some companies are designing underwear that absorbs period blood directly and can be washed and used over and over, while other menstruators choose to bleed freely throughout their periods, eschewing the traditional stigma that comes from visible evidence of this most basic of biological realities.

And breaking down the stigma around menstruation, says Bobel, is critical to moving toward a more socially and environmentally thoughtful future.

“I’m not denying that we need something to bleed on,” she says. “And at the same time, I want to acknowledge that we are fooling ourselves if we say promoting any product is going to fix the stigma. It's not.”

Change will come, she thinks, when the conversations change.