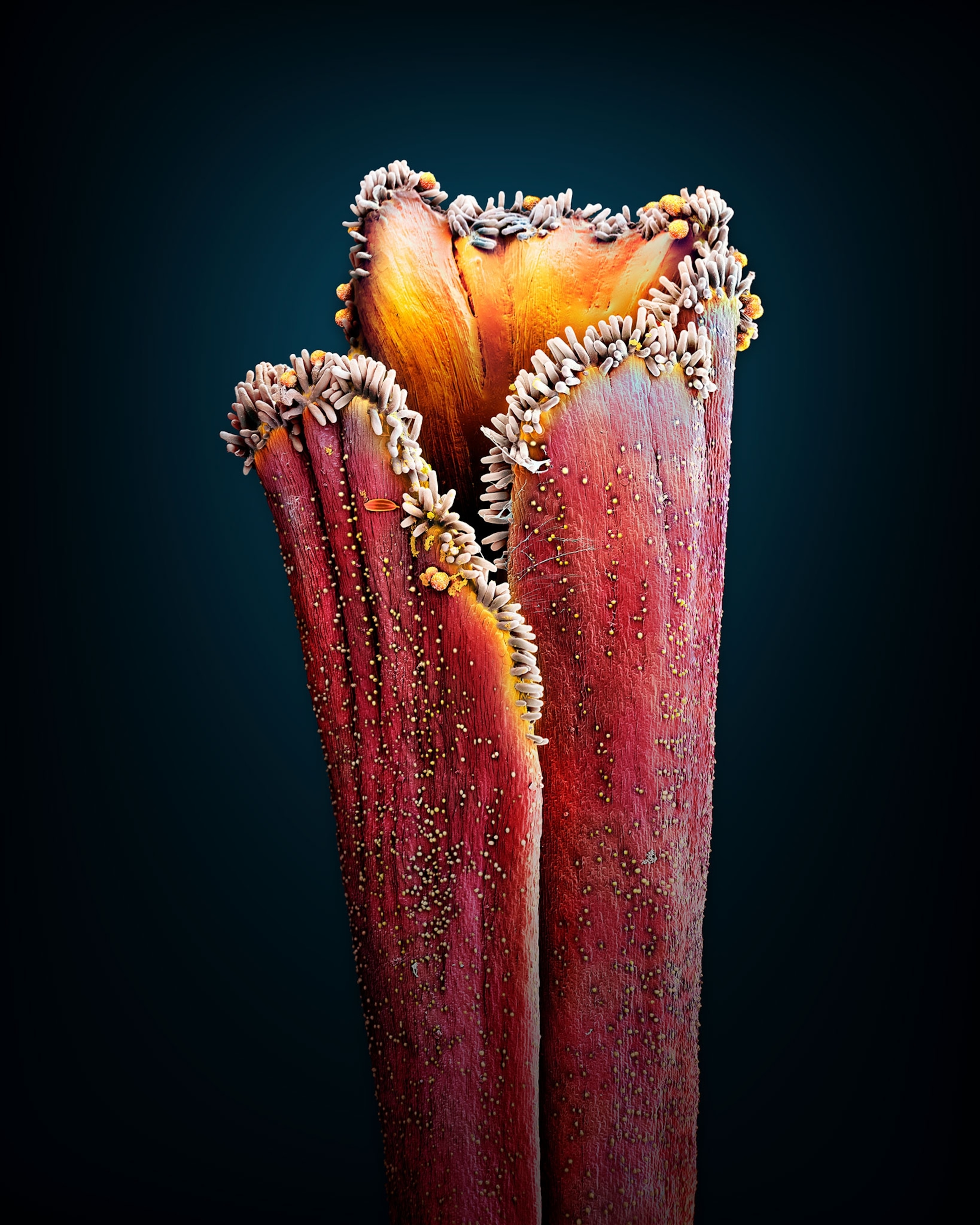 See the microscopic wonders of herbs

A photographer reveals the intricacies of kitchen herbs. The result is otherworldly.

Part of a sculpture by Calder, perhaps? No. This is the bright red stigma of the saffron flower, Crocus sativus. It takes roughly 170,000 flowers and their stigmas to produce one kilogram of saffron. As a result, it is one of the most expensive spices in the world.
Photograph by Martin Oeggerli, National Geographic

Amateur Dutch scientist Anton van Leeuwenhoek, who lived in the late 1600s, was obsessed with the minute details of daily life.

Leeuwenhoek studied any living thing he could find in his Delft home, be it the stings of bees, the mouths of fleas, or even his own sperm. He had also pondered kitchen spices, including black peppercorns. He wanted to determine the source of their spice.

After mixing peppercorns in water to soften them, he pulled out his microscope to examine the result. Leeuwenhoek imagined he might spot tiny spikes or arrows on the peppercorn responsible for its zing. Instead, he found tiny spheres with smooth ridges.

But there was something else. Alongside the peppercorns, Leeuwenhoek saw tiny, moving organisms: bacteria—the first ever observed. In searching for the cause of the spiciness, he inadvertently discovered the wiggly edge of a previously unnoticed world.

Photographer-scientist Martin Oeggerli has picked up where Leeuwenhoek left off.

Oeggerli uses microscopes many times more powerful than those used by Leeuwenhoek to study some of the very same things. Oeggerli has photographed insect eggs, pollen, mites, and bug eyes.

Recently Oeggerli turned his lens on spices: rosemary, lavender, sage, basil, and saffron. In doing so, he sees a landscape both “alien” and “surreal,” he noted.

Oeggerli’s images reveal a microscopic world but also reconstruct it: He colors his images in order to highlight some structures while allowing others to recede. Reds and yellows may point us toward what might otherwise be missed. His technique often emphasizes beauty, clarity, or even sublimity.

But with these spices he focuses on the ways in which the travails, wars, and sex of ordinary plants flavor our lives.

Black pepper, we now know, is spicy not because of spikes but because of chemical compounds called piperines. In the wild, piperines act as a pesticide, killing or warding off insects and fungi that might eat the pepper plant or its fruit, the corns. These same compounds also stave off humans, binding to receptors in our mouths that detect heat. The effect is a warning: Don’t eat me; I’ll burn you. But our ancestors figured out that the heat of these compounds was even pleasurable in the right dose.

In considering other spices, Oeggerli encountered structures that, like the chemicals in peppers, relate to both the flavors and the wild lives of the plants. The features of the leaves on view in rosemary, lavender, sage, and basil are nearly all connected to self-preservation.

Many plants used as spices evolved in the dry conditions of the Mediterranean, where the sun and drought are a constant threat. For such plants, each bit of leaf, stem, or seed is hard-won, and so also fiercely protected.

The white hairs on the lavender plant protect its leaves from the glare of the sun and help to keep precious water from evaporating too quickly. Rosemary has a similar arsenal and sage arms its hairs with trident spikes.

Basil, though, is different. Although like sage and lavender, it belongs to the mint family, it didn't evolve in dry habitats. Most species of basil used in cooking are native to wet, tropical habitats in Africa and Asia. For basil, drought and heat were not the worst threats. As a result, its leaves are softer and more naked, almost bald.

In addition to hairs, structures that Oeggerli has colored more brightly are small pots of chemical defenses: On basil, light green “buttons”; on lavender and sage, yellow or greenish balloons; on rosemary, yellow balloons and purple toadstools on white stems.

At once factories and silos, these structures contain many of the chemicals we taste and smell when we use these herbs; the flavors of herbs are their arsenal. Just which chemicals (and flavors) a particular plant has depended both on its ancient evolutionary history and its more recent battles. Ancient history makes the flavors of and scents of lavender so very, well, lavender. The more recent battles determine why one variety of lavender or any other herb is different others of the same species. Varieties have distinct tastes because of the differences in their chemistry. Some are better defended against slugs, others against sheep, others still against insects. In each herb, then, we find a ghost of the species against which the herb protected itself. But these aren’t the only ghosts Oeggerli has captured.

The most visually unusual, and haunted, of the spices photographed by Oeggerli is the one that looks nothing like the others: the red saffron. The saffron, used both for seasoning and coloring food, is neither leaf nor flower. It is, instead, one part of the female flower on which pollinating insects stand and inadvertently leave pollen. It is a sexual landing pad.

The saffron plant is a species of crocus and, like many crocuses, it has an unusually long style. It is not known which species of insects pollinate the wild crocus relatives of saffron. Nor is it known why the style is full of water-soluble, colorful compounds that redden our foods, or why the style, in small doses, makes great food more delicious with a sort of pungent honey.

Maybe the chemicals that flavor the style prevented the plant from being devoured by herbivores. Maybe the red color attracted pollinating insects. What we do know is that whatever insect once visited the wild ancestors of saffron, it no longer does so with saffron itself, at least not in the same way. At some point in the domestication of saffron, male saffron flowers became infertile; saffron is now produced clonally. Insects may still land on the styles but when they do, they offer nothing of value. The style of the saffron is now entirely without biological function, a monument to the sex its ancestors had.

Hints of what Oeggerli has shown can be experienced in your own kitchen. The hairs of rosemary, sage, or lavender can be seen with the naked eye, or felt by tongue. Tear a leaf and you’ll smell a volatile fragrance being released from the small balloons of chemicals.

We have yet to see the roots, seeds, or inner workings of these plants. In our cabinets, so much else that deserves inspection: salt, cumin, sesame, chives. The world is full of things we have yet to examine carefully. The work of seeing, work that Leeuwenhoek began and Oegerlli continues, is never done.

This article originated as part of a sponsored Future of Food series.