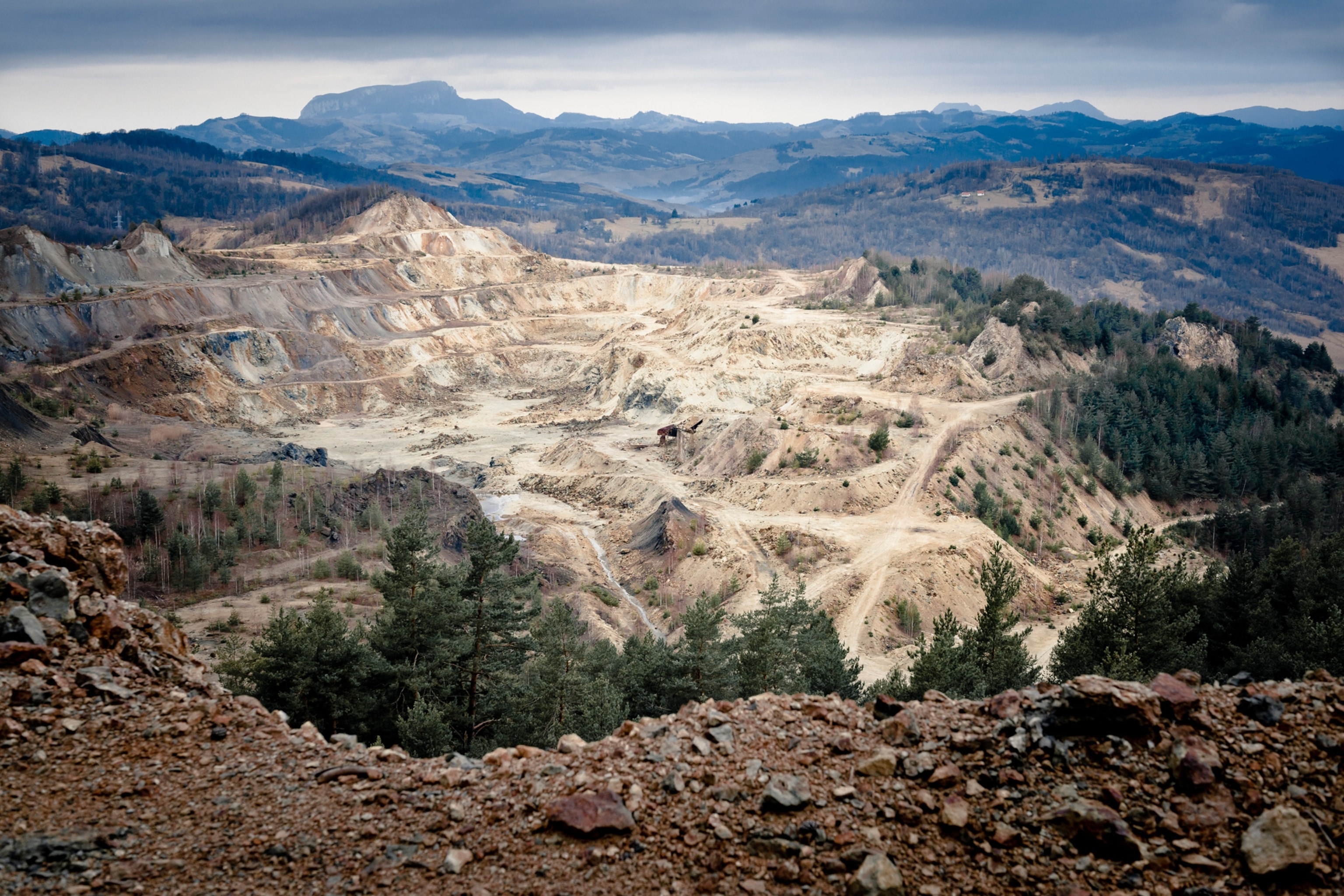 In Transylvania, A Fierce Battle Over Gold And Roman History

In a nearly unprecedented move, Romania changed course on a bid to protect a site containing rare archeological artifacts.

Transylvania's Roșia Montană region contains a host of unique archeological sites, many of them underground. Canadian company Gabriel Resources seeks to mine for gold and silver in the region (former mine site shown).
Photograph by David Vogt, VISUM via Redux

The mountains of Transylvania may not be haunted by vampires, but they are full of gold that attracts what some view as predatory attention, in a battle that refuses to die. The bitter fight concerns a foreign company's proposal to build Europe’s largest open-pit gold mine at a historic site called Roșia Montană.

In the picturesque Apuseni Mountains, peppered with castles and forests, people have dug gold and silver from the Earth for more than 2,000 years. Roșia Montană contains the world’s largest and most important intact Roman mining tunnels—with rarities like writing tablets and water wheels that once controlled water flow in the galleries, says Andrew Wilson, an Oxford professor of archaeology who co-authored a study of the area’s treasures. Wooded peaks, ancient grave sites, churches, and other archaeological sites round out the community, making it a natural and historic gem.

That makes it all the more surprising that the Romanian government just temporarily pulled its application for the area to be protected as a World Heritage Site.

At the center of the debate is a dispute with the mining company seeking access to the site. Following massive protests that began in earnest in 2013, the Romanian government decided against issuing permits that could’ve allowed Canadian company Gabriel Resources to go forward with the mine, and enacted several legal protections for Roșia Montană. In response, the company took the country to court before the International Centre for Settlement of Investment Disputes, a branch of the World Bank, asking for $4.4 billion in damages. That massive sum is more than two percent of the country’s GDP.

The plan for the open-pit mine proposes using tens of thousands of tons of cyanide to separate gold from crushed rock, creating a large reservoir full of cyanide-laced water. The extensive development would “obliterate most of the area's unique archaeology,” Wilson says. That would include tunnels—most of which remain unexplored—harboring evidence of early modern mining from the Austro-Hungarian empire, and extensive Communist-era galleries, Wilson adds.

Many residents, who refuse to leave, would also have to be forcibly moved. (Related: The Real Price of Gold)

In 2017, the Romanian government applied to list Roșia Montană as a World Heritage Site, a prestigious designation administered by the United Nations Educational, Scientific and Cultural Organization that brings with it international acclaim and special legal protections that would end any prospect of mining. It would also provide a draw for tourism to this impoverished area.

But the case lives on, undead. In a nearly unprecedented move earlier this month at the annual World Heritage Committee meeting in Bahrain, the government—now led by the Social Democrats, who took back power last year, and many of whom have supported the mine—postponed a vote on the application for Roșia Montană.

“It’s extremely unusual,” says Sneška Quaedvlieg-Mihailović, secretary general of Europa Nostra, which works to protect Europe’s cultural and natural heritage. “Most of the time, governments are fighting for their sites.” Only once before has a country submitted and then temporarily withdrawna a site to be considered for World Heritage Site listing, he adds. (Learn more about the UNESCO World Heritage program.)

The committee could vote on the application within the next three years if Romania reinstates it, but after that time they’ll have to start the whole process over again, which in this case took more than a year.

The Social Democratic government explained that going forward with a UNESCO listing might affect the country’s case involving the Canadian mining company. But advocates suggest otherwise, noting that the area is already protected by various Romanian laws. Nicolae Ratiu, chairman of the board of the Pro Patrimonio Foundation—one of the main Romanian organizations fighting the mine, along with a group called Alburnus Maior—says the move could be a step toward reopening the mine.

“It is Romania’s most shameful moment since it entered UNESCO,” Vlad Alexandrescu, a senator with opposition party USR who was present at the UNESCO World Heritage Committee debate told Business Review. “The interests of a corporation and a political class... were more important than the national interest.” Several members of the Romanian government, as well as Gabriel Resources, did not respond to interview requests or declined to comment for this story.

Some mine opponents suggest the move fits in with a recent pattern of backsliding in broader efforts to fight corruption in the country, one of the European Union’s poorest. As the New York Times reported on July 5, the Romanian Parliament passed a bill to lower penalties for abuses of power, igniting public backlash.

The proposed mine would entail creating a large reservoir full of cyanide-laden waste products called tailings that, besides destroying some of the area’s historical structures and tunnels, could present a threat to the surrounding community.

In 2010, the European Parliament proposed banning the use of cyanide in mining, noting that over the prior 25 years there’d been more than 30 major accidents involving spills of the chemical worldwide and that “there is no real guarantee that such accidents will not occur again, especially taking into account the increasing incidence of extreme weather conditions” such as heavy rains. But the EU Commission decided against a ban due to “the lack of affordable alternative technologies.”

In Romania, such accidents are not merely theoretical. In 2000 at a site called Baia Mare in the country’s northwest, a reservoir full of mine waste sprung a leak and spilled 100,000 cubic meters of water and up to 100 tons of cyanide, in addition to large amounts of heavy metals, into a nearby river. This toxic plume made its way to the Danube, contaminating the drinking water of millions and killing thousands of tons of fish. Many have described it as the largest environmental disaster in Europe since the Chernobyl nuclear accident.

The country’s backtracking was an understandable reaction to the many political pressures that come with the ICSID case, says Carla García Zendejas, a legal expert with the Center for International Environmental Law who along with others advises local groups that oppose the mine. In the case, the company alleges that Romania violated agreements that entitle the company to develop the site through its majority-owned subsidiary, the Roșia Montană Gold Corporation.

“These types of cases by private companies against states have a tremendous impact, when you’re facing down expensive arbitration that could cost billions of dollars,” Zendejas says. “But it’s unfortunate that the Romanian government capitulated, and requested that the process be delayed.”

Records show that in these kind of arbitration claims the company usually wins, which can lead to enormous settlements. For example, Ecuador lost two arbitration cases initiated in 2010 and 2012 and was ordered to pay $2.4 billion plus interest, the equivalent of more than three percent of its GDP.

In the case of Gabriel Resources, which argues that Romania expropriated its assets, nobody outside of the case had been able to see the company’s official claim until today, when a year-old, partially redacted copy of the document was released.

“This is a very closed and opaque process,” Zendejas says.

To go forward with the mine, the Romanian government would have to issue an environmental permit, and change several laws currently in place. Opponents say that appears possible with the current government.

But opposition to the mine remains strong, as witnessed in the grassroots campaign that originally helped prevent its construction, says Radu Delicote, a strategist at the political consulting group Smartlink Communications.

“There’s a lot of discontent with the political class,” he says, and if the government tries to go forward with mining at Roșia Montană it would stoke that anger.

“It’s a very dangerous game they’re playing,” Ratiu adds. “I don’t think they realize how strongly the Romanian people feel about it.”