Will Titanic’s iconic telegraph be recovered by deep-ocean robots?

A new court ruling marks the latest step by a private company to salvage a wireless machine that broadcast the last pleas for help from the shipwreck.

Over the course of three hours on the night of April 14-15, 1912, the messages transmitted by the telegraph operator aboard the R.M.S. Titanic went from the frivolous (on behalf of a passenger to a friend in New York: “Hello Boy. Dining with you tonight in spirit,”) to the frantic (Titanic to R.M.S. Carpathia: “We have struck a berg.”) to the final (“Come quick. Engine room nearly full.”).

Now, a federal judge has ruled that the private company with salvage rights to Titanic may potentially recover the telegraph set from inside the wreck, an act the court says “will contribute to the legacy left by the indelible loss of the Titanic, those who survived, and those who gave their lives in the sinking.”

The decision, handed down Monday by Rebecca Beach Smith of the U.S. District Court for the Eastern District of Virginia, modifies a ruling in 2000 by a previous judge that prohibits the salvage firm, RMS Titanic, Inc. (RMST), from cutting into or detaching pieces from the wreck. Removal of the telegraph machine, located inside the ship’s officers’ quarters, may require cutting or widening holes in the hull and detaching equipment from interior walls.

Read how Titanic was actually found during a secret Cold War navy mission. 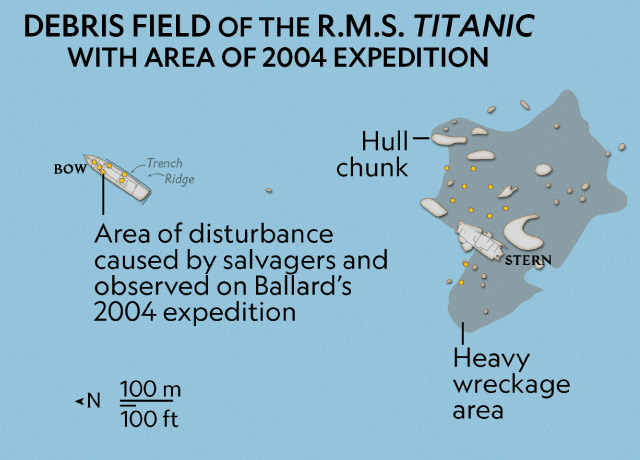 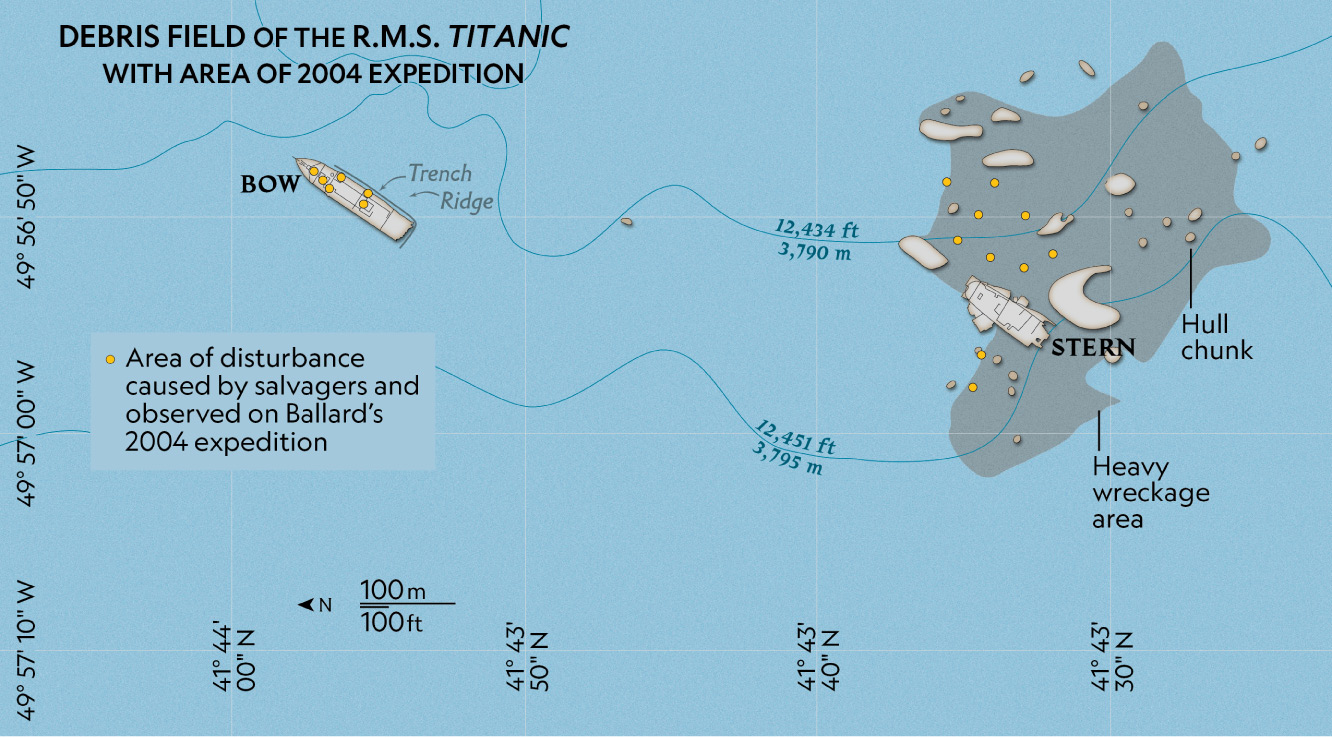 Many archaeologists and cultural heritage representatives have opposed the removal of artifacts from Titanic, the final resting site for more than 1,500 people.

“Just like a lion is much better appreciated in the wilds of the African savannahs (sic) than it is stuffed in a museum, so too does the Marconi apparatus best tell its story and share its value where it is,” writes David Conlin, chief of the U.S. National Park Service’s Submerged Resources Center, in a court filing.

The telegraph aboard Titanic was an advanced piece of equipment for its time: a wireless communication device developed by Guglielmo Marconi, a pioneer in the field. The device was located in the “Marconi Suite,” a series of three rooms on the port side of the officers’ quarters that included a sleeping berth, the telegraph operator’s room, and a “Silent Room” where the main telegraph transmitter was located.

The story of the events that occurred in the Marconi Suite—including the heroic efforts of chief telegraphist Jack Phillips to transmit emergency calls to nearby ships as the frigid waters of the Atlantic lapped at his legs—were made famous by Philip’s assistant Harold Bride. Philips went down with the ship; Bride was rescued and went on to share a harrowing account of that night in the pages of the New York Times.

See the most complete and most intimate images of Titanic.

A court filing by RMST speculates that if the telegraph’s motor-generator set and disc discharger were to be recovered from the Silent Room, “it is conceivable that it could be restored to operable condition,” and with new components “Titanic’s radio – Titanic’s voice – could once again be heard, now and forever.”

The ruling is the latest development in a multi-year legal tussle over the fate of the legendary shipwreck, which was discovered by National Geographic Explorer Robert Ballard in 1985. The entity that eventually became RMST was awarded salvage rights in 1994; those rights were upheld in 2011 under a specific set of terms and conditions.

Between 1993 and 2004, the private firm has recovered more than 5,000 artifacts from the debris field surrounding the main wreck of Titanic. Many of the items are displayed in museums and exhibits around the world.

Because Titanic rests almost 2.5 miles beneath the North Atlantic, the recovery of artifacts from the site requires the use of a remotely operated vehicle (ROV) tethered to a research vessel.

According to a January 2020 court filing, RMST plans to use an ROV to enter Titanic, either through an existing skylight over the Marconi Suite, or through a hole cut into the hull. The ROV would then navigate into the Silent Room, where a topside operator would manipulate the vehicle’s robotic arms to separate the telegraph components from the wreck.

Representatives for RMST argued in court that “new evidence”—the allegedly accelerating decay of the wreck—was sufficient to request a modification of the 2000 no-cut order.

The January filing also states that the primary Marconi telegraph components targeted for recovery are the motor-generator set and discharger mounted on a bedplate and bolted to the steel deck, and a pair of wall-mounted switchboards and regulators. Both are located in the Silent Room.

The filing also notes, however, that the primary targets “present serious challenges to recovery.” Three “secondary targets”—smaller, more lightweight components of the Marconi telegraph, were also identified for recovery from the Silent Room.

According to a court filing earlier this month, however, RMST predicted that “based on the information today… it will not attempt to recover the motor-generator set from the Silent Room because it will be too inaccessible and too risky.”

In her Monday ruling, Judge Smith notes the 2000 order is not being overturned, but rather modified at this time only for the “unique opportunity” to remove artifacts associated with the Marconi telegraph from Titanic. In addition, any attempt to enter Titanic and raise the telegraph will be conditioned on court approval of a funding plan to ensure that RMST not only has the money to raise the artifacts, but also to conserve and document them.

RMST is currently planning an expedition to Titanic this summer to recover the Marconi telegraph.