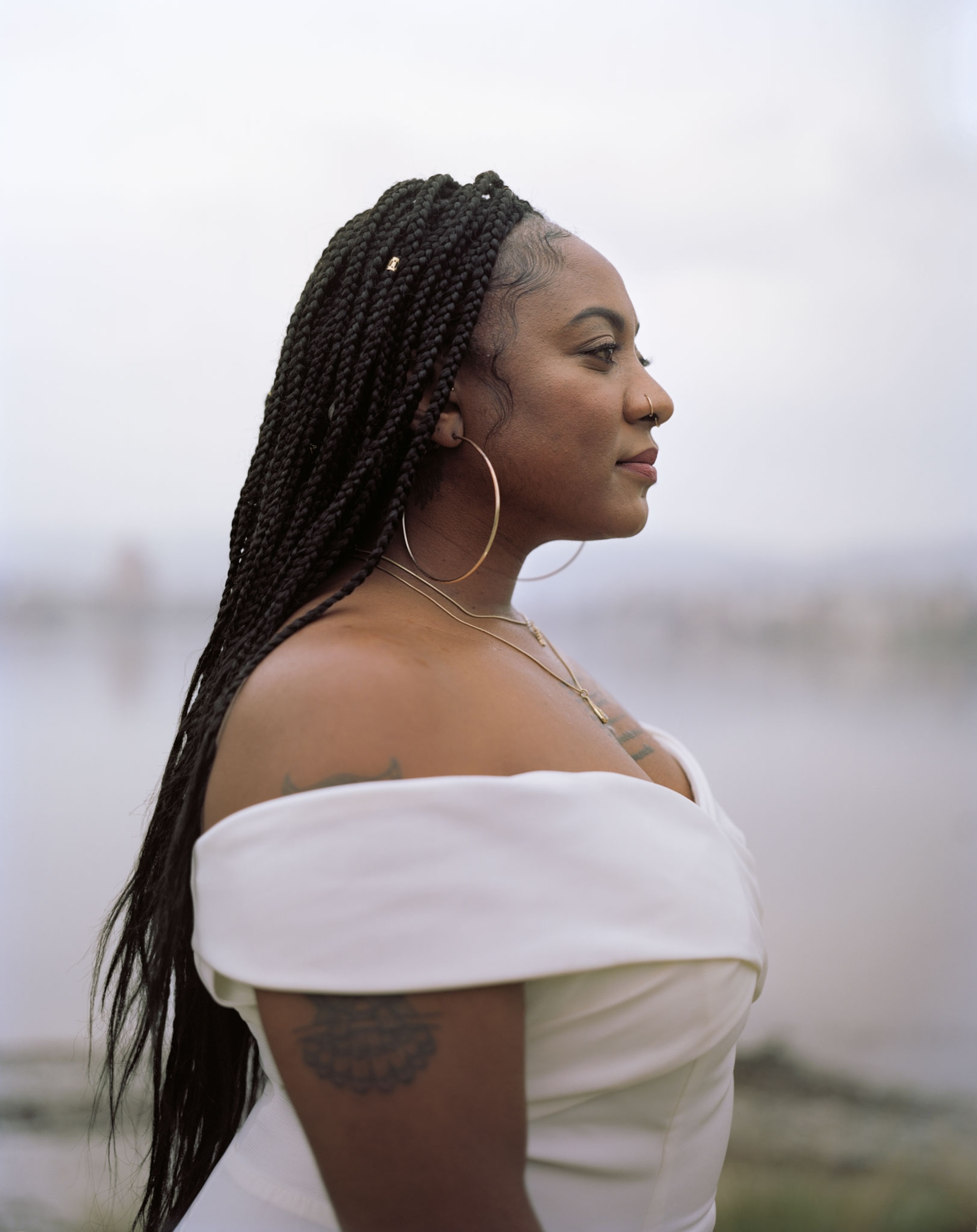 From the archives: Black Lives Matter co-founder reflects on a life of activism

In this interview from National Geographic's 2019 book "Women," Alicia Garza discusses the power of persistence in fighting injustice.

In July 2013, when a Florida man named George Zimmerman was acquitted in the shooting death of an unarmed, black 17-year-old named Trayvon Martin, Alicia Garza felt she had to act. An Oakland, California, activist and writer, Garza posted on Facebook, urging mobilization in response to the verdict. She ended with this: “Black people. I love you. I love us. We matter. Our lives matter. Black lives matter.” Two other activists Garza knew—Opal Tometi of Phoenix and Patrisse Cullors of Los Angeles—joined the call to action, and Cullors added the hashtag #BlackLivesMatter.

Garza’s phrase has catalyzed a national movement against racial injustice. Garza works for the National Domestic Workers Alliance, as well as the Black Lives Matter Global Network she co-founded, and serves as principal of Black Futures Lab, an organization set on building Black political power. A self-described queer Black woman, she aims to raise awareness of how police violence crosses boundaries of sexual orientation and gender identity, as well as race.

Susan Goldberg: My first question is: What do you think is the single most important change that needs to happen for women in the next 10 years?

Alicia Garza: Oh, that’s a simple question. The most important thing that needs to happen for women in the next 10 years is building power. What I mean by that is, women need to be in positions to make decisions about our own lives and the lives of the people that we care about. And it’s long, long, long overdue. We don’t have power, so all these things are happening to the people we love, and to ourselves and our families, and we’re not in a position to shift that in a significant way.

A vast majority of the U.S. Congress is white Christian men. That’s a big problem, considering Congress is where resources are being distributed, where laws are being made. As long as we’re underrepresented in positions of power and decision-making bodies like that, it’s going to be a big challenge to us being able to get the things that we need and want for our futures. (Related: Women around the world discuss what needs to change by 2030.)

SG: What’s an example of things you think women want for the future?

SG: So, do you consider yourself a feminist?

AG: Hell yeah, I consider myself a feminist! To me, feminism is very much about being able to live full and dignified lives—and if that’s the definition of feminism, I can’t imagine why anyone would be against it. But, as we know, there are many people who are against feminism, and even some women don’t identity as feminists, and I understand that. But I would say it’s important that we don’t allow misguided efforts to hijack what is fundamentally at the center of feminism, which is equity and humanity and dignity.

SG: What are the biggest hurdles that you had to overcome?

AG: Patriarchy is a huge one. Racism. And also—and I think this is a byproduct of both of those things—what people call imposter syndrome. Right? Where you can’t imagine why anyone would think that you could be a leader or consider you to be a leader. And of course, I would be remiss if I didn’t talk about all of the efforts to create chaos in what we’re up to [with the Black Lives Matter movement]. From death threats to trolls to surveillance to all kinds of different things—there are many barriers that get thrown up in our path.

(Related: Read our latest interview with Garza about how the Black Lives Matter movement is now global.)

SG: What would you consider to be your breakthrough moment?

AG: Hmm, that’s a great question. I have had many a breakthrough which I think is kind of the nature of this work, right? We find possibilities. But my most recent breakthrough is really that I belong to myself. Sometimes when you’re in a position such as this one, there’s a lot of demands being placed on you, your time, your energy, your heart space—and the recent breakthrough is just that if I’m not nourishing myself, it’s really hard to provide any kind of support for anyone else. So, I’m trying to be a living commitment to that. There are more requests for support, for engagement, for whatever, than you can reasonably engage. So in the process of trying to prioritize, first and foremost you have to prioritize yourself and what you need to be well.

SG: I totally agree with you. This is sort of a related question: What is your greatest strength?

AG: My greatest strength is my ability to ignore it when I get no for an answer. When people tell me it cannot be done, it must not be done, it has never been done, there’s something that goes off inside of me that says: Okay, watch me.

SG: Right! I love that answer. Okay, sort of switching gears here: What living person do you most admire?

AG: What living person do I most admire? There are so many, but I’m going to go with Barbara Lee. She’s my congressperson and right after September 11, she took an action that was incredibly courageous, and at the time it was incredibly unpopular. People were shaken and hurt and rageful about the many acts of violence that occurred that day and in subsequent days, in response to the attacks on the Twin Towers. And she was the lone vote against the resolution that allowed the United States to go to war, the only one to say “No, this is not the right way to go.” And I will say, that to have that kind of fortitude and clarity and integrity is something that I aspire to every single day. And when we look back all these years later, I think we can agree that not only was she courageous, but she was visionary: She understood that war begets war, violence begets violence.

SG: Next question: What historic figure do you most identify with?

AG: Hmm. On a good day, I’m going to go with Harriet Tubman.

AG: There are a lot of reasons. First, her courage to escape slavery with all the risks that that entailed. Second, her fortitude, to take more people with her; her generosity and her communal spirit. Third, the way she kept attacking the institution of slavery even by forming unlikely alliances. Today, we hear about John Brown and how people should be abolitionists. But in that particular historical moment, John Brown was considered to be a crazy person—and she was able to see through some of the challenges that did exist with him and his crew, and use it in the service of the people that she cared about. Fourth, she endured an incredible amount of heartbreak.

When she reached “freedom,” she actually went back for her siblings, and then for her husband. When she went back for her siblings she found out that one of her siblings had passed away in the time when she was pursuing her own freedom, and you can imagine how terrible that must have been. And then when she went back to get her husband, she found that he had remarried and he refused to leave with her. Things such as that could break a person, but she was not broken—and in fact she was even more fortified than before.

I can go on and on; Harriet Tubman is an idol of mine. I think about her, especially in moments where I’m scared or hesitant to do something or I’m worried about what people will think. I think about the folklore that surrounds her where she would literally put a gun to [a hesitant escapee’s] back and say, “Hey it’s time, let’s go, it’s going to be okay and I’ve got your back.” So when I feel like I’m not sure if I can do things, I just feel the poke of that gun—and I’m like, Okay, let’s go.

SG: So, what advice would you give to young women today?

AG: My advice for young women today would be, Keep going. There are so many things that tell us to stop doing what we’re doing, and that’s happening everywhere we are—it’s not only outside of your house, it’s also inside of your house. So I would just say, Keep going. Belong to yourself. Hold yourself to a high standard of integrity, because integrity will take you farther than anything. And be bold, take risks and say “Sorry” later. (Here's why women should unapologetically revel in their ambition and success.)