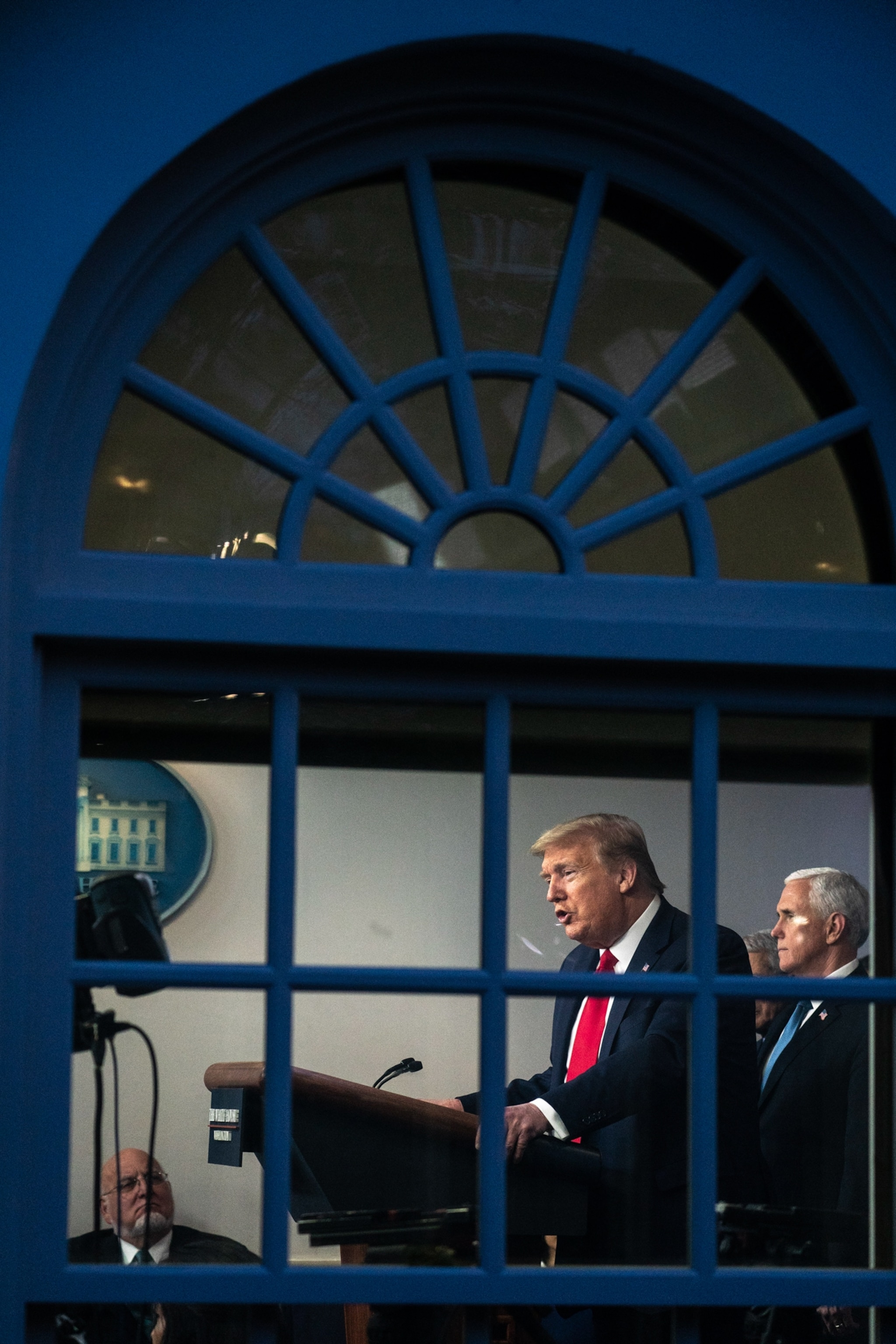 Calls to replace Trump via the 25th Amendment are growing. Here’s why it’s never happened before.

Eisenhower-era fears of an incapacitated president spurred the measure’s adoption. Its most serious provision has never been invoked.

President Donald Trump and Vice President Mike Pence at a coronavirus task force briefing in April 2020. In the wake of the insurrection of the U.S. Capitol, lawmakers have called on Pence to invoke the 25th Amendment that would remove Trump from office.

In the hours after an armed mob of President Trump’s supporters stormed the U.S. Capitol to disrupt the certification of the presidential election, reports emerged that senior Trump administration officials are considering invoking the 25th Amendment to remove the president from office before his term expires on January 20.

Calls to invoke the amendment from lawmakers on both sides of the aisle have also intensified. Among them are presumptive Senate Majority Leader Chuck Schumer, a Democrat; Democratic Speaker of the House Nancy Pelosi; Senator Bob Casey, a Democrat from Pennsylvania; and Republican Adam Kinziger, a Representative from Illinois. “What happened at the U.S. Capitol yesterday was an insurrection against the United States, incited by President Trump,” Schumer wrote. “This president must not hold office one day longer.”

But what exactly is the 25th Amendment—and can a vice president really oust a sitting president? In force since 1967, the 25th Amendment was designed to fill the Constitution’s confusing silence on questions of succession in the wake of nearly two centuries of presidential illnesses and deaths. It also allows a vice president to work with other members of the government to remove from office a president who is deemed incapable of serving.

But due to its gravity, the provision that provides for presidential removal has never been invoked, and doing so could push the nation onto even shakier political ground. Here’s why—and a deeper look at how the 25th Amendment came to be.

Throughout the 1787 Constitutional Convention, the framers floated different suggestions as to who should step in if the president was no longer able to serve. Proposals included everyone from the president of the Senate to the Chief Justice to a group of presidential advisers. Once the vice presidency was decided on late in the convention, the office was given succession responsibility.

In Article II of the Constitution, the framers wrote that if a president was removed, died, resigned, or was unable to carry out his duties, those duties would devolve on the vice president.

But the founders failed to specify whether a vice president is actually sworn in as the president or simply carries out the president’s duties—and over a century of confusion ensued. When President William Henry Harrison died after just a month in office in 1841, Vice President John Tyler assumed the presidency amid a debate as to how and even whether he should take office. That precedent stood, yet questions still remained about its constitutionality.

Presidential health also posed serious questions about succession, though the public did not always know it. It would take until the 20th century—and several serious presidential illnesses that opened questions as to who was actually running the country—for Congress to finally resolve these issues with the 25th Amendment.

Origins of the amendment

In 1919, President Woodrow Wilson was incapacitated by a stroke and served out the rest of his term as an invalid. President Dwight D. Eisenhower had a heart attack and surgery for Crohn's disease in 1955 and a stroke in 1957. Both of these serious illnesses were hidden from the public. But no one who did know about them attempted to relieve either president of his duties—and neither president had a mechanism by which to allow their vice presidents to legally take over their offices until they recovered. (How past U.S. presidents have battled illness in office.)

This troubled Eisenhower. He was all too aware that due to advances in modern medicine, a seriously ill president might live on for years without being able to carry out his duties and be too incapacitated to resign and transfer them to anyone else. The Cold War, which had left the United States vulnerable to attacks and sensitive about any perceived weakness, made Eisenhower even more eager to take action.

As he lay in a hospital bed recovering from his 1955 heart attack, the president directed Attorney General Herbert Brownell to draft a Constitutional amendment to clarify the succession issue and separate the question of a president’s inability to serve from a president’s death, resignation, or impeachment.

Brownell and a panel of political scientists drafted an amendment that allowed a president to declare his own inability to lead or allow a vice president to obtain a declaration of the president’s incapacitation from a majority of Cabinet members. But though the amendment was submitted to Congress, lawmakers weren't convinced it was necessary—or that a mechanism by which a vice president could somehow remove a president from office should even exist.

In the meantime, Eisenhower drafted a written agreement with his vice president, Richard Nixon, to take over some of his presidential duties if he was incapacitated—an agreement that, though vetted by the nation's attorney general, was not legally binding.

It would take a tragedy to finally spur action. After President John F. Kennedy's 1963 assassination, Vice President Lyndon B. Johnson became the chief executive. Johnson had also suffered a heart attack in 1955 when he was the Senate Majority Leader. After the shooting, Senator Birch Bayh was able to push through a debate on what is now the 25th Amendment—and Eisenhower himself helped gain the amendment the support it needed to pass in 1965 and be ratified in 1967.

How the 25th Amendment works

The first three sections have all been invoked since 1967, when Gerald Ford became president after President Richard Nixon’s resignation, and during surgeries and medical procedures undergone by Presidents Ronald Reagan and George W. Bush. But Section 4 has never been invoked.

The section allows the vice president—joined by a majority of either the president’s cabinet or a body designated by Congress with a law—to declare to the speaker of the House and president pro tempore of the Senate that the president “is unable to discharge the powers and duties of his office” and immediately take over the presidency. The president can declare in writing that no disability exists and resume the office, but Congress can decide the issue with a two-thirds vote if the vice president objects.

Since the amendment’s passage, though, debate has raged as to what “inability” might mean. Senator Bayh, who drafted the amendment, told his staff that the fourth clause should only be invoked “if the President was as nutty as a fruit cake. Mental illness, pure and simple, is the only time this provision would be used.”

Dementia and senility have both been cited as possible reasons the amendment could be invoked, especially given the advanced age of many presidents. Though Reagan’s aides reportedly considered invoking the amendment during a period of inattentiveness and erratic behavior following the Iran-Contra scandal, they never did. Reagan was diagnosed with Alzheimer’s five years after leaving office.

But not until Trump’s presidency has the issue been so publicly discussed—or as gravely considered. In October 2020, House Democrats proposed an expert panel to assess the president’s mental fitness during his treatment for Covid-19. The resolution was not adopted.

Now, groups as diverse as the editorial board of the Washington Post, the NAACP, and the National Association of Manufacturers have encouraged Trump’s ouster. In a letter to the vice president, Democrats from the House Judiciary Committee asked him to move forward. “President Trump’s willingness to incite violence and social unrest to overturn the election results by force clearly meet this standard,” they argued.

But will Vice President Pence heed the call? If he does decide to invoke the clause and briefly serves as the 46th president, the move will thrust the nation into unknown territory. Then again—in the aftermath of an unprecedented insurrection in the nation’s capital, the United States is already on unnervingly unfamiliar ground.