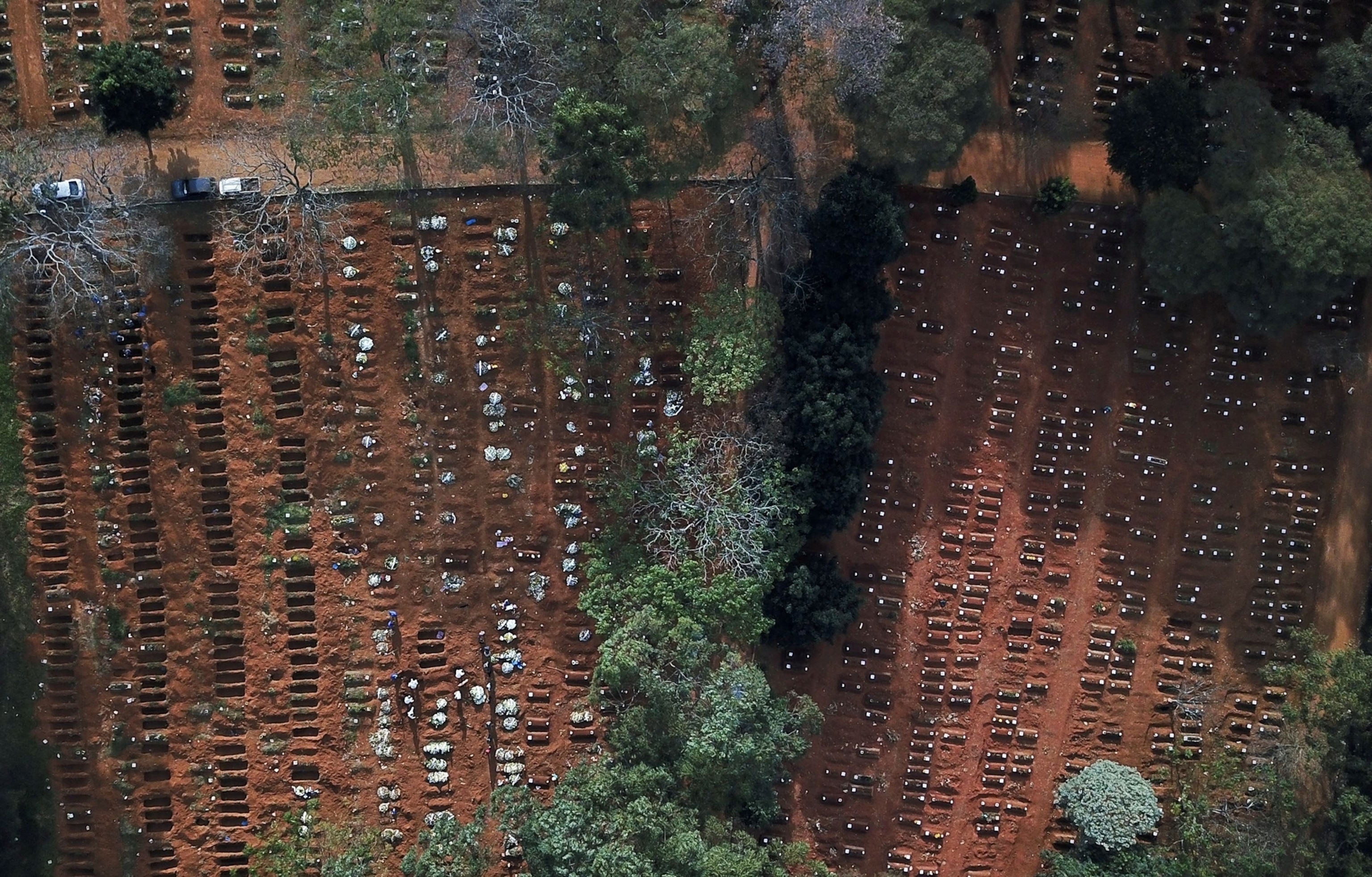 As coronavirus sweeps Brazil, families only have 10 minutes to say goodbye

With the second highest number of coronavirus cases in the world, Brazil has imposed restrictions on funerals and left families unable to mourn.

More than 1.5 million people are buried at Vila Formosa Cemetery in São Paulo, thought to be the largest in Latin America. The older burials are on the right, the freshly dug on the left.

A death caused by a suspected case of COVID-19 is flagged as a biohazard, and the D3 stamped at the top of the 79-year-old’s paperwork meant the gravediggers needed to suit up in full personal protective equipment—thick, teal rubber gloves, an N95 mask, and a hooded white plastic suit—before the hearse arrived.

For the family—like many others around the globe—it meant they had just 10 minutes to say goodbye.

Da Silva’s two sons, protected by gloves and masks, gripped the sides of the wooden casket as they carried their father to his final resting place across the mounds of dirt piled between rows of open graves. His granddaughter followed, a wreath of white and red flowers, delivered last minute, clutched in her gloved hands, her boyfriend trailing behind.

Manoel worked in a commercial kitchen until his retirement. He went back to work, selling lottery tickets on the city streets, when he realized his pension wasn’t enough to get by. Chatting with customers made his day, but he knew he had to comply with self-isolation when São Paulo officially declared a citywide quarantine on March 24.

A week later he was in the hospital. Another week later, he was buried; the results of his coronavirus test still weren’t back.

A gravedigger exhumes the remains from an earlier burial to prepare the site for a new one.

A gravedigger cleans a burial site at Vila Formosa Cemetery. One of three public cemeteries in São Paulo, Vila Formosa has seen nearly twice as many burials this April than the same month last year.

There was no wake for the father of three, no funeral service with family and friends gathered around, sharing stories: his love of hard work, cats and dogs, and singing samba classics around the house. Brazilian wakes can be large affairs, with an open casket, and attendees embracing the deceased.

Instead, his body was wrapped in plastic, his casket sealed. His wife of 60 years, her own health long questionable, couldn’t be there to say one final farewell, and his daughter stayed home to watch over her.

The four who could make it stood shoulder to shoulder, watching silently as the men hurried to cover the casket. (Undertakers in Italy are haunted by what they saw during the crisis.)

When the last shovel of dirt was tossed, a heap among the rows of vacant graves waiting to be filled, Manoel’s youngest son, Rodrigo Manoel da Silva, dropped his chin to his chest.

“It wasn’t supposed to be like this,” he whispered, as another hearse pulled up next to Q56, the section of the cemetery where his father was laid to rest. “Everybody wanted to be here. They should have been here. He deserved better.”

Since the arrival of the novel coronavirus in Brazil, burials have been brief. Many of its victims in São Paulo, where the majority of the country’s cases and deaths are concentrated, are being sent to the Vila Formosa Cemetery, considered the largest in Latin America at 750,000 square meters (185 acres). More than 1.5 million people are buried within the two-part complex, founded in May 1949.

One of three public cemeteries in the city, Vila Formosa saw nearly 1,684 burials this April—nearly twice as many as the same month last year. Its employees are overwhelmed as they work to bury the dead while following regulations to keep the living safe. Some 60 percent of gravediggers who work for the municipal funeral services are over 60 and have been put on leave for being at high risk for contracting the coronavirus. The city hired 220 temporary workers through a third-party company to keep up with the bodies.

Brazil has the second highest number of COVID-19 cases in the world, after the U.S., with 514,849 confirmed cases and 29,314 deaths. Thousands more, like Manoel, were waiting for test results when they died, only to be added to the tally long after they were gone. Still others were never tested, the reason for their deaths labeled only as respiratory failure. (Here's the problem behind unreliable COVID-19 testing.)

For the families left behind, the loss is palpable. They grieve not only their loved ones but also the loss of traditional mourning rituals.

Gilberto Júlio took the ballcap from his head and closed his eyes. It was late afternoon, and he had just minutes left with his grandmother. The gravediggers at Vila Formosa Cemetery rushed to finish the job in front of them, their gloved hands grasping the ropes wrapped around Diva Barbosa’s casket as it inched closer to the 85-year-old’s final resting place. Another hearse had already arrived, another family in shock and tears. They didn’t want to keep them waiting.

Only a handful of Diva’s five children, 13 grandchildren, 18 great-grandchildren and one great-great-grandchild were at her burial. Only 10 people are allowed at the cemetery for each person being laid to rest, whether the death was related to the coronavirus or not. The rest wait at home, knowing a phone call soon will come to describe the hurried farewell.

But nobody can describe Diva’s final moments. She first went to a local clinic in respiratory distress that she thought was caused by asthma, a disease that had long afflicted her, along with diabetes and high blood pressure. Two weeks later she was transferred to a nearby hospital, where she would spend the next two months sedated and intubated, leaving her unable to speak. Her family weren’t allowed to see her.

Hospital staff tested her for COVID-19 the day she arrived, but something went wrong and she needed to be tested again. As her family stood beside her grave, they still hadn’t received the results from her second test.

Tears rolled down the cheeks of her granddaughter, Tatiane Ferreira.

She remembers her grandmother as reserved but strong, someone who taught her to never depend on anybody but herself. Diva was always up at 4:30 a.m., ready to take care of her home, her grandchildren and their children, and any others who came by.

Tatiane and the rest of the family took a step to the side as a hearse backed up next to them. A man clutching a well-worn, leather-bound Bible waited with the other six members of his family as four workers finished digging his brother’s grave.

Givaldo Neri Reis was just 46 years old when he was admitted to the hospital with what doctors initially thought was pneumonia. Two days into his 20-day ICU stay it was confirmed he had COVID-19. He didn’t have any preexisting illnesses, so his family was sure he would pull through.

Instead, Ueliton Neri Reis read a passage from the Bible as his brother was laid to rest, his voice cracking as the word “God” stumbled from his lips.

At the same time, Wesley Reis held his cell phone in front of his masked face to make sure the rest of the family could see his uncle’s burial in the live video he recorded. Most of them, including Givaldo’s 71-year-old mother, had to stay home. (For those mourning remotely, will it be enough?)

The shoulders of another man started to shake as short sobs escaped his mouth. Ueliton continued to read, his voice rising and falling as dirt was heaved onto the casket in weighty shovelfuls. Wesley tried to hold his phone steady as his hands trembled. He blinked away the tears welling up in his eyes. Perhaps he wanted a clear vision of his uncle’s burial. He knew it was the last time he would see him.

Another hearse backed in next to Wesley. His 10 minutes were coming to an end.