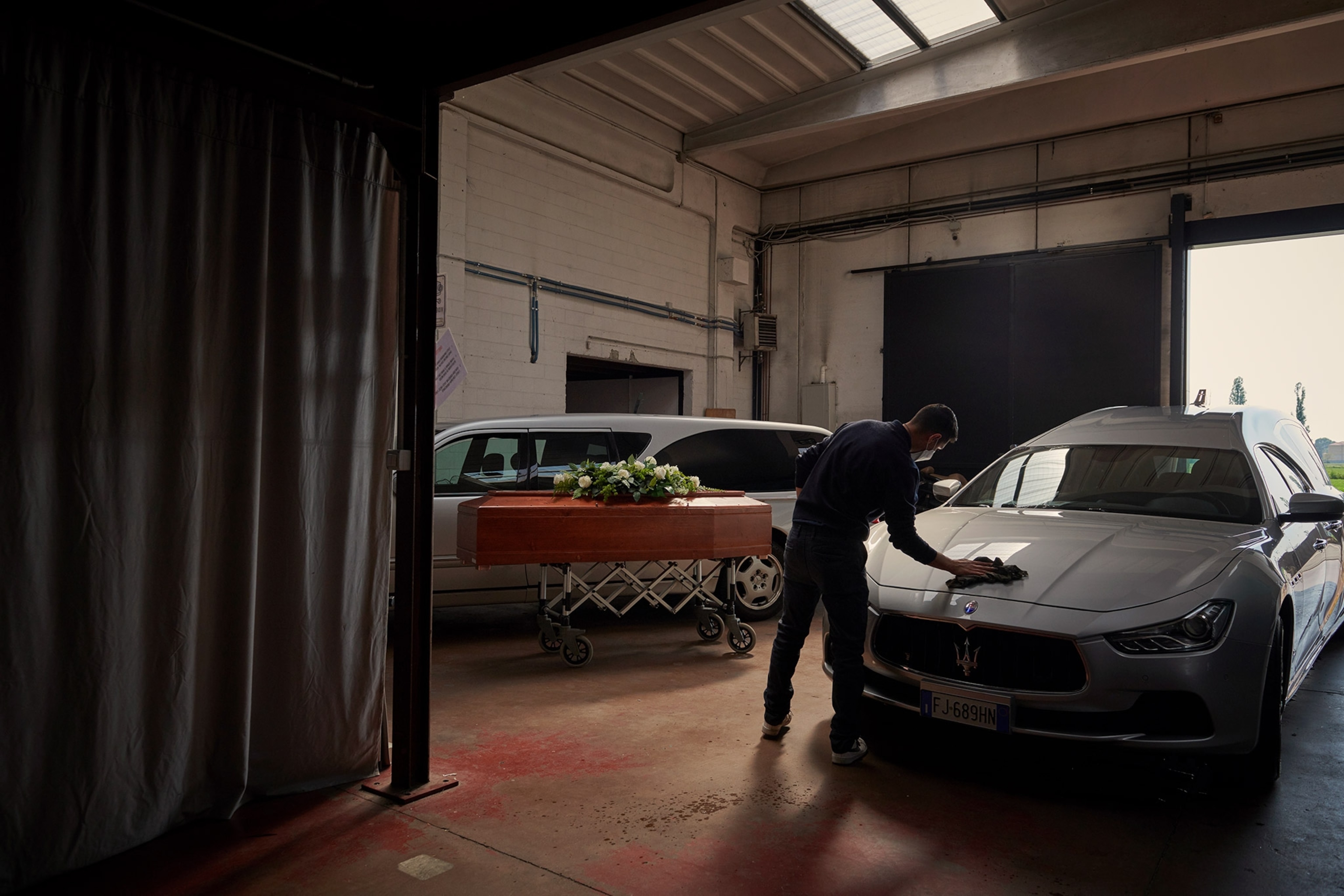 These undertakers served on the coronavirus frontlines—now they're struggling

Italy's funeral home workers are haunted by what they saw in the pandemic's epicenter.

In Inveruno, just outside Milan, a Vergani funeral home employee cleans a hearse after it was used to transport the coffin of a deceased man from his home. In the early days of the pandemic, undertakers in Italy worked with few protections, and many of them likely contracted the virus.
Photograph by Chiara Goia, National Geographic

In Italy, one of the countries hit hardest by the coronavirus, the death rate is slowing. Previously backlogged crematoriums are catching up, and churches no longer hold stacks of overflow caskets. Funerals, which were banned on March 10, were allowed again beginning May 4. But for funeral home workers who spent months on the front lines, the battle against COVID-19 isn’t over.

As the country tries to ease out of the pandemic, undertakers such as Roberta Caprini continue to feel the full effects of the virus’s mental toll. “Sometimes I would return home at night, exhausted, and I would tear up a little [from] what I had seen during the day,” she said. Months later, she still hasn’t had time to process everything that’s happened. “I haven’t really taken a break from it yet. I am not sure what will happen when [I do].”

In April, a few weeks after the height of the pandemic there, I spent a week photographing the work of more than 20 mortuary workers, including Caprini, in northern Italy. Even now, it’s hard to reflect on. I’ve been a professional photographer since 2008. I’ve seen suffering; I’ve seen bad things, but I’ve never been to a war. I don’t like to think of the pandemic as a war, but the undertakers I met told me that’s what it feels like to them. They say the number of people killed by the virus in Italy—now around 33,500—is comparable to those killed in a military conflict. (Related: See how lonely Italians grappled with life indoors.)

The people I met work in the Lombardy region, which includes the towns of Bergamo, Brescia, and Inveruno, and was at the center of Italy’s outbreak. Each day, I drove from my home in Milan, along highway A4, typically northern Italy’s busiest. Often, I was the only one on the road. The villages I passed were ghost towns. One day, I stopped into a church in Seriate, near Bergamo, where two priests were performing a brief rite over 27 coffins filled with people who had died of COVID-19. Afterward, the army transported the coffins to be cremated. The nearby crematoriums were so overwhelmed that the army had to bring them to other cities in Italy. It was chaotic: For some families, weeks went by before they found out where their deceased relatives were.

So many people were dying at the time that coffins were being stored in churches, hospitals, funeral homes, and nursing homes before going to a crematorium. In a Roman Catholic country such as Italy, lengthy funerals full of family, friends, and extended relatives are a deeply rooted tradition. But during the lockdown, when funerals were banned, only four relatives were allowed at burials.

In February, as the coronavirus crept into Italy, undertakers conducted funerals as usual. They collected bodies from hospital morgues and had to enter ICUs and emergency rooms to gather documents of the deceased. In Bergamo, Antonio Ricciardi, president of Centro Funerario Bergamasco funeral home, told me he couldn’t forget what he’d seen in the emergency rooms: people gasping for air, unable to stand up in the hallways. One day he passed a room full of bodies. The air was abuzz with the sound of cell phones ringing. No one was there to answer.

During those early days, funeral workers performed their jobs without protective equipment. As a result, many got sick and some died. Undertakers, along with health care workers, were among the first to realize the gravity of the situation. The government didn’t provide any assistance for these front-line workers. They told me they felt forgotten, so they protested.

Roberta Caprini was among those protesting. She felt she had no choice. She, her brother, and their cousin had to take over the family funeral business when her father and uncle got sick with COVID-19. Since then, like other undertakers, they’ve gone the extra mile—sending photos of deceased loved ones to families not allowed to attend funerals and retrieving personal items such as wedding rings and cell phones left behind at hospitals. Once, while transporting the body of a virus victim, Caprini took a detour to drive slowly past the deceased’s house, so that his relatives, quarantined inside, could have a final memory of him—something few people were able to have. (Related: Read how France’s paramedics and undertakers helped families say goodbye.)

Soon after the protests, the government agreed to provide protective equipment and banned funerals. It also made it illegal to dress the bodies of the recently deceased—which made undertakers’ jobs safer, but also took away an important part of their business.

In the wake of the ban, the protocols in mortuaries were strict. Undertakers wore full protective equipment. At hospitals, the deceased were double bagged, laid in a sealed coffin for 12 hours, and then taken to be buried or cremated.

Most undertakers worked 11- to 12-hour shifts without a break during those months. Some said it was just part of the job. I don’t believe anyone can come out of this unaffected, not when you’re surrounded by so much death. Many I spoke to were deeply affected and continue to be haunted by the experience.

Fabio Brignoli is 28 and has been an undertaker since he was 18. In those 10 years, he said, he’d never had nightmares. Now when he goes home after work, he closes his eyes and sees coffins—“those coffins with the names sometimes written with permanent markers,” he said.

Antonio Ricciardi, the funeral director in Bergamo, was so afraid of infecting his family that he slept on the sofa bed in his office for two months. He’d sleep for a restless five or six hours, consumed with anxiety. “I was afraid of dying,” he recalled. “I have never experienced this fear before. But hearing all these stories and seeing all these people dying within a few days made me very worried.”

I was afraid, too. Working in the middle of the coronavirus in Italy, I couldn’t afford to make mistakes. I wore two masks along with gloves and disinfected my hands every three minutes. But after many of the funeral workers were tested for antibodies, I realized that I was probably in the safest place. Though these tests aren’t entirely reliable, they gave me some comfort. When the employees at Centro Funerario Bergamasco in Bergamo took the test, it showed that most of them likely had the virus earlier, probably in mid-February, when several recalled being sick for a few days. (Related: Learn how to measure your nation's response to coronavirus.)

The funeral ban has been lifted, but there are still restrictions. Funerals are allowed in churches, but with no more than 15 people, who must stay socially distanced and wear masks. Undertakers still can’t dress the dead.

In cities such as Brescia, it was forbidden to bury ashes until two weeks ago. So urns were set aside in crematoriums and funeral homes. In mid-May, I attended a ceremony where about 350 urns were blessed inside a small chapel in the city cemetery. It was just the bishop of Brescia, who officiated, local politicians, and the media. They returned the ashes to relatives for them to bury or keep.

No one knows what the lasting impacts of COVID-19 will be. As Italy slowly reopens, people are beginning to emerge from their homes. A few weeks ago, we were terrified of contagion. Now people are gradually returning to normal routines. Some are eating at restaurants. The infection rate and death toll is going down, but we’re not out of danger yet. (Related: Follow India's migrant workers as they flee India's cities during coronavirus.)

People who understand the risks and sacrifices Italy’s undertakers endured value them even more. But, sadly, these workers still struggle with misconceptions. For a long time, they did their jobs under a cloud of old superstitions. A trace of that still exists, but most just laugh it off. Recently, some in the public and media have accused these essential workers of profiting from the pandemic’s death toll. That’s not true, the workers told me. Yes, more people who’ve died from the virus have been buried, but without services such as dressing the body and funeral planning, which make up the bulk of the industry’s profits.

Ricciardi told me that his funeral home, one of Bergamo’s largest, conducted 1,090 funerals in March. Typically, they’d have about 1,300 in an entire year. By the end of the year, he said, he may have to furlough staff because of the loss in profit.

Stefano Vergani, who runs Il Giardino Degli Angeli with his brother Angelo, in Inveruno, believes the sparse and quick burials they were forced to conduct at the height of the pandemic were an eye-opener. “People don’t become aware of the ugly until they see it," he said.

In the wake of the health crisis, Vergani sees a silver lining: Perhaps now, the ability to say goodbye to the deceased won’t be taken for granted. And the funeral services that were absent during the lockdown—from the guests to the presentation of the casket—will be treasured.

Chiara Goia is a documentary and travel photographer living in Italy. For the past 10 years, she has been based between Asia and Europe, working for international publications. Visit her website and follow her on Instagram.