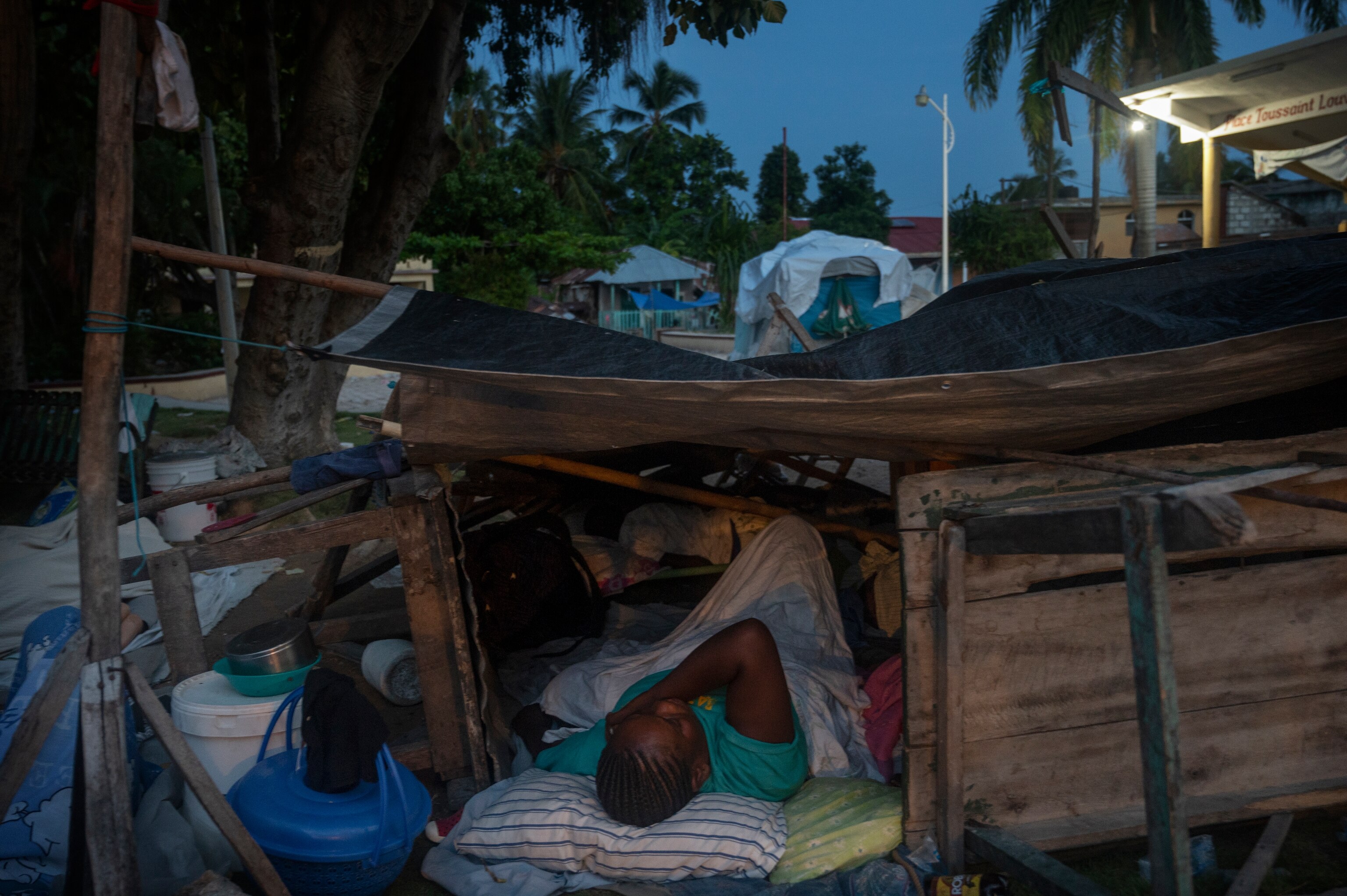 A week after Haiti’s deadly earthquake, hope is hard to find

Haitians are scrambling for food, shelter, and health care as the ongoing pandemic, natural disasters and a presidential assassination take their toll.

A resident of Corail, Haiti, sleeps on the streets in a makeshift shelter. “Most of this town is now homeless,” said Alex Maxcia, the magistrat (mayor) of Corail. Those who didn’t flee the city of 23,000 people, a two-hour drive from Jeremie, sleep on the streets. Their cracked and broken homes are unlivable.

Jeremie, HaitiHaiti, it seems, is a magnet for disasters.

The Caribbean nation, with a long history of political turmoil and instability, is now contending with successive natural disasters even as it struggles to recover from a string of other devastating events, including the 2010 earthquake that killed more than 300,000 people and nearly wiped out the capital city of Port-au-Prince.

The death toll and injuries from the latest, and even more powerful earthquake that rocked this already fragile Caribbean nation a week ago, continues to rise. It was followed by heavy rains from Tropical Storm Grace that compounded the misery.

Haitians are now bracing for more difficult times ahead.

In updated figures released Sunday, Haitian authorities said they have now registered more than 2,200 deaths and there are at least 344 people missing. More than 12,200 people were injured and over 129,900 homes were damaged or destroyed. Authorities have also said that some 684,000 people in the hardest-hit regions are in need of urgent humanitarian assistance.

The storm came just two days after the deadly earthquake. Though Grace spared the country a direct hit, the storm’s incessant rainfall spurred floods that created more burden for earthquake victims amidst a slow rollout of aid.

In a country with more willingness than capacity to provide healthcare and assistance, at least 44 health facilities, including collapsed hospitals, have been affected by the continuing tremors. Medical personnel are treating patients on floors, in open courtyards, and in makeshift operating rooms that had served as doctors’ dorms.

Before the disasters, many rural communities had their own local health care workers, clinics, and supplies. With their local resources gone, many of the sick or injured have sought care in facilities in Jeremie, the capital of Grand’Anse, one of Haiti's 10 departments.

“Those patients shouldn’t need to come down from their homes, risking possible landslides for an injury that could have easily been taken care of by a community healthcare worker,” says Nadesha Mijoba, country director for the Haitian Health Foundation.

Grand’Anse was just starting to recover from the 2016 Category 4 Hurricane Matthew, which left widespread damage. Saturday’s 7.2 magnitude earthquake left at least 8,000 homes here either in rough shape or in shambles, according to preliminary figures.

The devastation remains evident. In the cities of Jeremie and Les Cayes, located in Haiti's southern peninsula, piles of debris mark where buildings once stood. Cathedrals still standing are open to the sky, their roofs ripped off. Cracks line the walls of the battered structures. And the injured continue to hobble in, seeking help.

Along the countryside, the damage is even worse. Walls are blown out, roofs are flattened on the ground like pancakes, some roads are barely passable. What the trembling earth didn’t bring down with its tremors, Grace did with its torrent. Together, earthquake and storm deluged mountains and split roads wide open.

The successive natural disasters have left many in this crisis-plagued nation feeling defeated and deflated.

“Every time I hear of an earthquake or a storm, I feel like something in me is about to explode,” says Marie Roseline Macenat, 56, a mother of five. “It’s tears in your eyes; you are crying. You sense that you can no longer stand.”

The devastation is compounded by political turmoil exacerbated by last month’s shocking assassination of President Jovenel Moïse, who was shot multiple times inside his private home on the hills above Port-au-Prince.

And the ongoing crisis is further complicated by the lack of security across the country. Concerns about gang violence, and uncertain access to the main road connecting Port-au-Prince to the quake-ravaged regions, have created logistical challenges for both the government and international responders who could not begin aid distribution until five days after the disasters.

It was five days too late for victims like Mariette Altime, a mother of four who has suffered through Haiti's last three major disasters: the 2010 earthquake that struck Port-au-Prince; 2016’s Hurricane Matthew, and now this. Altime was forced onto the streets following the 7.0 quake that struck Port-au-Prince on Jan. 12, 2010, leaving 1.5 million without a home due mostly to poorly-constructed buildings that crumpled with the powerful tremor.

After the 2010 earthquake, Altime spent months sleeping on a dirty mattress, exposed to the elements, before deciding that she had had enough of Port-au-Prince. She returned home to Marceline, which was then a remote rural outpost on the outskirts of Les Cayes—and is now known as the port city hit hard by Saturday’s quake.

For a while after Altime’s return, life was ok, even as she struggled to make ends meet. Then Hurricane Matthew rolled through in 2016, snapping trees like toothpicks and wiping out much of the area’s farmland before leaving the population once more praying for relief and deeper in poverty.

“I suffered a lot of misery with these events,” Altime says. She’s standing in a soccer field where she and four other families spent the night in torrential downpour from Grace after the wind blew away their makeshift tarp. “I feel like it’s God who is holding me up.”

Across South and Western Haiti, where the quake’s jolts were the strongest, houses were reduced to rubble, and government buildings are buried beneath debris. The fishing village of Corail, east of Jeremie, is in ruins. Residents have taken refuge in the main plaza creating makeshift shelters out of pieces of tarp and old tents. Across the plaza, the local Catholic Church is now a pile of rocks, while the school is barely recognizable save for the wooden desks dangling from its second floor. Meanwhile, residents in even more rural areas have resorted to drinking brackish water and recycling soiled six-year-old U.S. Agency for International Development tarps for shelter.

Those most affected can’t fathom rebuilding, even if they might want to.

Haiti was already facing a mountain of challenges, and multiple crises, before this disaster. Rebuilding efforts are still underway more than a decade after the 2010 earthquake and thousands continue to live in makeshift encampments.

Prior to his pre-dawn assassination on July 7, Haitian President Moïse was accused of trying to become Latin America and the Caribbean’s next strongman after he used his decree powers to issue dozens of controversial laws, and threatened a constitutional referendum that experts said was illegal.

Moïse—one of only 11 elected officials because Haiti failed to hold elections on time—faced massive challenges to his rule. The political turmoil deepened in 2019 as the country faced one of its worst and most widespread economic meltdowns, known as peyi lok—country lockdown. Schools and businesses closed, and jobs were paralyzed.

But none of that is the reason behind the grinding poverty, or why the cash-strapped government has struggled to provide even the most basic of care for the new earthquake victims. Bandages, antibiotics, and IVs are all lacking; one volunteer responder at the Les Cayes airport was heard lamenting that patients designated to be airlifted out of the area were showing up having received no medical treatment at all. As he uttered his frustrations, he was preparing a splint for a man whom he laid on the ground after making a plank made of cut-up pieces of cardboard.

According to three separate reports, nearly $2 billion in aid that should have gone toward improving Haitians’ lives—aid given to Haiti by Venezuela,  most of it since the 2010 earthquake—was wasted or embezzled by former government officials and those with close ties to the government.

While the aid was not necessarily earmarked for the communities rocked by this latest quake, if the money had been properly used and the infrastructure built, the thinking is that the country would be a step closer to responding to the latest disaster. The chaos and political uncertainty that has ensnared Haiti has no doubt led to a worsening humanitarian and child malnutrition crises, which only got worse after armed gang clashes erupted at the southern entrance of Port-au-Prince and forced the internal displacement of over 16,000 people.

Places like Marceline in the southwest were supposed to be a safe haven. But with gangs controlling the road out of Port-au-Prince, aid is slow to trickle in and Haitians once more are having to choose between potentially dangerous outcomes of aftershocks inside damaged homes and sleeping outdoors. There is little doubt that Haitians will plunge deeper into poverty.

Prime Minister Ariel Henry, a public health specialist and neurosurgeon, has told the population of 11.5 million to brace for hard times.

Haiti has a huge humanitarian crisis on its hands, Henry said, adding that while the quake devastated a large part of the southern regions, it showed just how fragile the entire country is.

“Some of our citizens are still under the debris,” he said. “We have teams of foreigners and Haitians working on it.”

While crews have managed to dig some people out with their bare hands and shovels, hospitals are overwhelmed with the number of injured coming in for treatment.

“We have to put our heads together to rebuild Haiti,” Henry urged the population. “This country is physically and mentally destroyed.”

That assessment is all too familiar to Altime.

Like many Haitians, she has learned not to expect much from the government. Not because it lacks funds but rather because even when aid was available, she never received help. Through the various disasters she said she felt as if she didn’t exist.

Now, her requests are basic.

“If I can just find a place to sleep,” she says, “find a tarp, something to eat.”

Andrea Bruce is a documentary photographer and contributor to National Geographic. She has photographed stories ranging from politics to sanitation.

Jacqueline Charles is the Haiti correspondent for the Miami Herald. A Pulitzer Prize finalist for her coverage of the 2010 Haiti earthquake, she was awarded a 2018 Maria Moors Cabot Prize — the most prestigious award for coverage of the Americas. Follow her on Twitter @Jacquiecharles