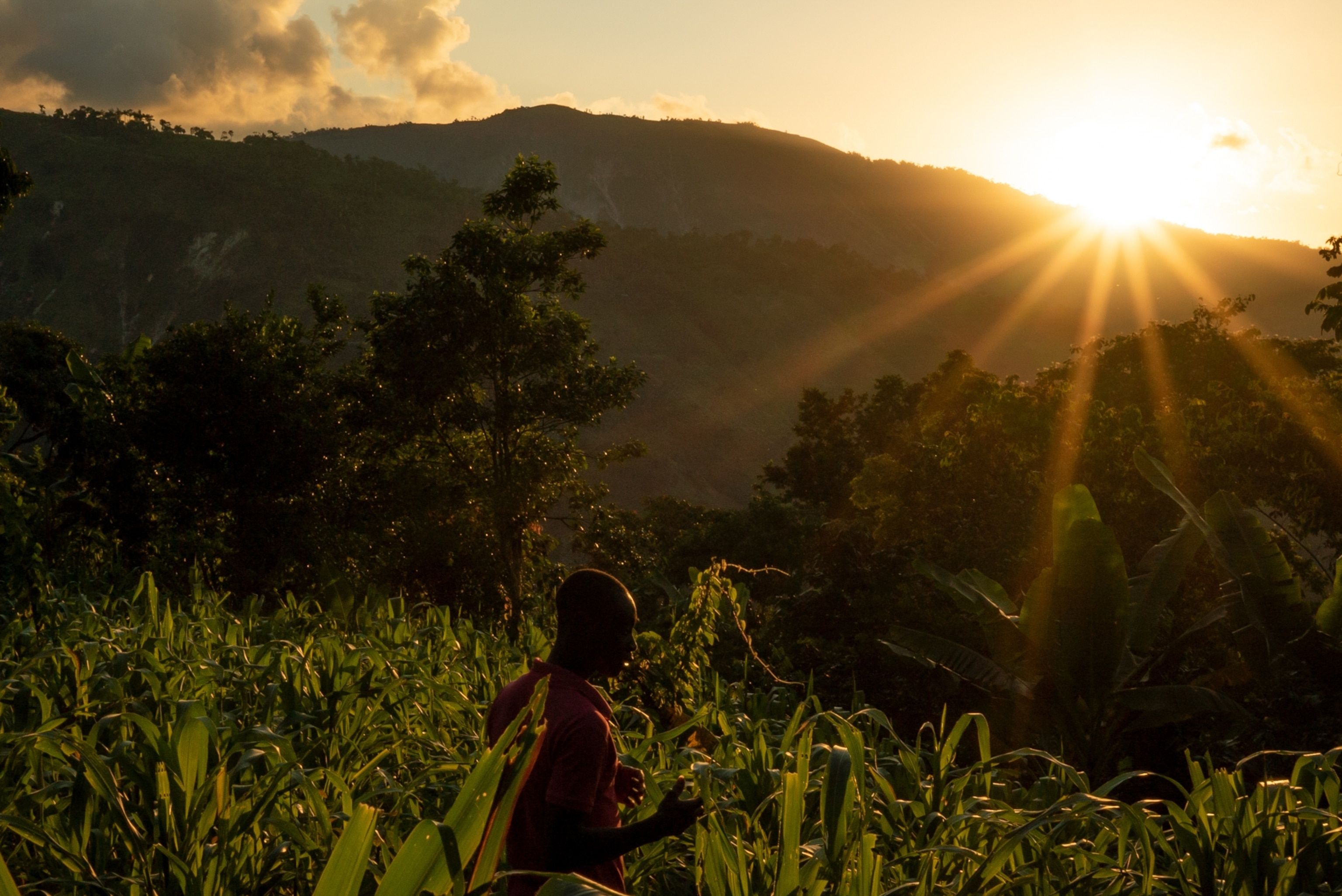 ‘They say a country never dies’: Haitians reflect on the past while confronting the future

As Haiti wrestles with the assassination of President Jovenel Moïse, a photographer examines what it means to be Haitian.

As Haiti prepares to bury assassinated President Jovenel Moïse, older Haitians share memories of life before and during a long history of turmoil, as well as times when growing up on this island felt safe, liberating even. Here, a young man hikes up a corn field at sunset in Laval, Carrefour in 2017.

Port-au-Prince, Haiti On Sundays in 1963, my grandmother, Myrto, recalled she would wake up to the gentle hustle of market women selling akasan, a cornmeal porridge, to families in downtown Port-au-Prince. As early as five in the morning, the diligent merchants walked up and down the paved avenues hoping to catch their loyal customers before dawn.

“They would sell the akasan in a big casserole, and I would tell them, ‘Give me 50 kob’s worth,’” she says, the equivalent of 10 cents at the time. When breakfast was finished, Myrto and my grandfather drove their three sons past a pavilion down the ocean-side boulevard leading to a luminous fountain, and across the legendary Bicentenaire Park, where my father and his brothers rode their bicycles into the horizon to the tempo of Strauss’ Waltzes played on speakers. “It was the good life,” Myrto says.

Thirty-six years earlier, in 1927, the now 104-year-old Odette Roy Fombrun circled the statues of Haiti’s founding fathers and walked past the National Palace in Champs de Mars on her way home from school. She was in fifth grade then and the daily ritual with her classmates also involved interacting with chatty, friendly neighbors. The ladies would sit and talk on the sidewalk in front of their wrought iron gates as if it were their living room as the schoolgirls politely waved back. She recalled the iconic architecture in the Bois Verna neighborhood as a green oasis, where all types of fruit trees—apricots, mangoes, cherries—bordered the fretwork-patterned homes, a striking contrast to the urban scenes that now define the bustle of Haiti’s capital city. “It was the American occupation at the time,” Fombrun says. “Order reigned.”

The memories allude to life before and during a long history of turmoil: the brutal Duvalier dictatorship that lasted three decades, the coups and countercoups, a rebellion against Haiti’s first democratically elected president, Jean-Bertrand Aristide, and the destructive 2010 earthquake that took thousands of lives. Now, the memories will be tainted by the brazen July 7 assassination of President Jovenel Moïse, shot multiple times in his bedroom under still murky circumstances.

As news spread of the president’s death, a thick fog of fear and confusion seemed to envelope the city. Streets emptied of its usual clogged traffic, businesses closed, politicians wrangled over who was the rightful new leader. Behind closed doors at homes, the lingering question: What happens next?

As the country prepares to bury Moïse on family land in the northern city of Cap-Haïtien on Friday, both my grandmother and Fombrun told about times when growing up on this island felt safe, liberating even.

Fombrun, who described her upbringing as simple but not destitute, would watch as her father showed up to the dinner table in a suit and a tie—imposing French as the language of choice in a country where the masses speak Creole—as his 11 children relished the sweet taste of lam veritab ragout, a breadfruit delicacy. Life in the hills above Port-au-Prince is not as chaotic as the nation is often depicted. But it is deeply Haitian, a complex society with roots to Africa, France, the United States and other nations.

“I’ve never denied my country,” my grandmother told me as we looked through old albums documenting her life in the mountains of Kenscoff, living alongside farmers who learned how to surrender to the inevitable heartache engrained in Haitian soil. “Haïti Chérie, Pi bel peyi pasé ou nanpwen, Fòk mwen te kite w pou mwen te kapab konprann valè w,” she hummed, recalling lyrics by Haitian singer Lumane Casimir. "Dear Haiti, there is no better country than you, I had to leave you so that I could appreciate how worthy you are."

The assassination has laid bare the fragility of a nation established by a slave revolt. Political instability under the Moïse administration had been brewing for months, creating division and clashes among those who are supposed to keep order. Yet no one expected such a thing: for the leader of the country to be attacked under a crescent moon in his own home in the hills, his body riddled with bullets, his wife wounded, two of his children listening to the mayhem as it occurred.

Yet as the sun rose that dreadful Wednesday, birds still sung their morning prayer and the inextricable magic of a place cursed with neglect helped carry us through the shock. As my family gathered for coffee on my aunt’s balcony, we were surrounded by jungle-like flora and a peaceful silence that temporarily obscured the fatal act that would touch every Haitian, including me.

My fascination with my grandmother’s homeland spans over six years when, in May 2015, following a burning desire to reconnect with my paternal roots, I stood waiting for my suitcase beside a battered baggage carousel at the Port-au-Prince airport. On the drive to my grandmother’s home, I stared out the window and instantly felt it. Amid the frenzy and often brutal reality of Haitian life seen on the streets exists an unspoken faith in a better tomorrow. Haitians are seemingly busy getting through one day to make it to the next. But life also is filled with laughter, music, prayer, pride and love of family and country.

On that first trip to Haiti, I listened to Krista Tippett’s On Being podcast on NPR, as I often do when seeking to better understand the complexities lingering at the heart of human life. The episode was a discussion with the late American author and cultural anthropologist Mary Catherine Bateson that provided context for my personal journey and attachment to Haiti. In it, Bateson, who died in January at the age of 81, said: “Multiple spheres of personal experience both echo and enable events shared more widely, expressions of a moment in a world in which we now recognize that no microcosm is completely separate, no tide pool, no forest, no family, no nation.”

‘We need a philosophy’

Sitting on her deck in the hills above Haiti’s capital, Fombrun sipped on a ti’ punch, a traditional cocktail made from local rum and cane syrup, as she reflected on the president’s murder. “I saw many fights, many combats. But this hatred? I can’t say I’ve ever lived that,” says Fombrun, a renowned writer who has published more than 500 articles in Haiti’s leading newspaper, the Nouvelliste, and recently wrote a memoir entitled, Ma Vie en Quatre Temps (My Life in Four Seasons). She looked over her shoulder into her living room parched with golden light, gesturing toward her desk where she will contemplate the words that will record this moment in Haiti. “The president, assassinated,’’ she says. “What I want to write, what I will write, or what I will not write.”

I asked Fombrun what she thought could heal Haiti from the grief over the past century. Her response mirrored my grandmother’s fervent attachment to rural living. “The Haitian countryside has shown us the way,” Fombrun says. “Throughout my youth, I saw farmers’ konbit and how they came together to plant new seeds. We need a philosophy, and I’ve called mine the konbitisme.” Fombrun is borrowing a term that originated after Haiti’s independence from France to describe the collaborative agricultural work organized by farmers to accomplish labor-intensive activities in a manner of solidarity.

A few days after Moïse’s death, I drove up to the pink and blue gingerbread mountain house my grandmother lived in when she was in her 50s. Christiana, the home’s caretaker, sat outside with her 10-year-old son, her hair wrapped in a plaid handkerchief. The blossoming of her son’s future persisted beneath the heaviness of their expressions. “I told him to write the date of Moïse’s death in his notebook,” Christiana said, “so that he never forgets what happened that day.”

For my 88-year-old grandmother, life from the past still intersects with today’s neighbors. Not too long ago, a young man came up to her car and thanked her for something she had long forgotten. “I know you probably won’t recognize me,” he said, “but you used to give me rides to school.” It had been 20 years since my grandmother stopped offering families roulib (a ride) from Kenscoff down to Pétion-Ville, where parents worked and the youth studied, after a boy told her it was no longer safe to do so. “My car was always full,” my grandmother recalled, smiling at the gaiety of her past.

On my way back to the airport on this trip, after three weeks of nurturing my tireless exploration of what it means to be Haitian, I imagined the landscapes that my grandmother and Fombrun had described with such affinity. For a brief moment, their Haiti came back to life—downtown’s colonial streets glimmered with unpolluted promises, the honking of jitneys called tap-taps faded into the chirping of colorful trogon birds and the white ruffles on the dresses of Kenscoff’s churchgoers swiveled in mid-summer breeze. “They say a country never dies,” my grandmother’s voice echoed in my mind. “I just hope I live long enough to see a country I am proud to call my own.”

Cristina Baussan is a photographer based between El Salvador and Haiti. See more of her work on her website and on Instagram.