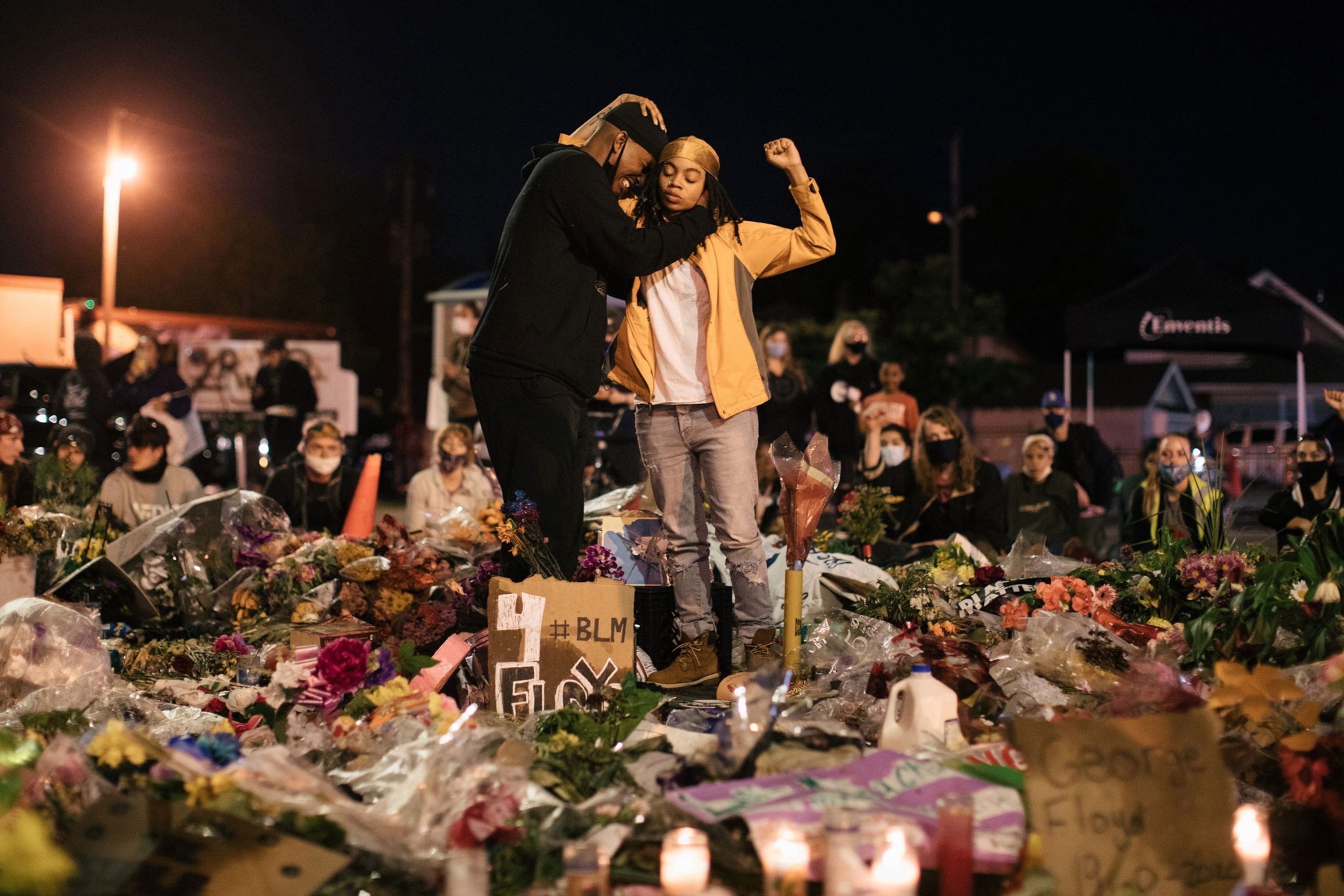 The history of the raised fist, a global symbol of fighting oppression

The forceful salute is intertwined with some of the 20th century's most tumultuous events, including conflicts with fascism.

A woman raises her fist while comforting a grieving man at the place in Minneapolis where George Floyd was killed in police custody. The gesture has become a sign of "resiliency and power," according to one activist.
Photograph by Alyssa Schukar, Redux

Huda Ahmed first saw fists raised in protest after the deaths of Eric Garner and Philando Castile at the hands of police. “As a young Black girl,” the San Diego activist says, “that symbolic fist really opened my eyes to the injustices within our country.” This summer, Ahmed has been raising her own fist during Black Lives Matter protests. She does it, she says, because the gesture “signifies resiliency and power through every triumph and struggle.”

The raised fist has been a staple of protests across the United States as the country continues to grapple with systemic racism. Demonstrators use it when confronting federal police in Portland, Oregon. People have spray painted it on sidewalks and the sides of buildings. There are even emojis.

Raising a fist in protest isn’t new. In 1968, sprinters Tommie Smith and John Carlos made the salute famous from an Olympic podium in Mexico City. But the gesture is even older than that, and tracing its winding path through European and U.S. political movements reveals how the struggles against racism and fascism have long been intertwined.

One of the earliest known instances in the U.S. of a protester brandishing a raised fist occurred in 1913, when “Big Bill” Haywood spoke to strikers during the Paterson silk strike in New Jersey. Haywood, a founding member of the union Industrial Workers of the World, preached working-class solidarity across all races and trades.

“Every finger by itself has no force,” he said, lifting his sizable hand to the crowd. “Now look,” he said, closing his fingers into a fist. “See that, that’s the IWW.”

Although that unified position gave the IWW the strength to achieve many of its goals for workers around the world, the workers’ movement faced violent opposition. By the 1920s, street battles were common between workers and the hired guns of employers—and between followers of different political ideologies. In 1926, one of the combatants, a German group called the Red Front Fighters (RFB), patented the clenched fist as part of their uniform and salute.

To Ernst Thälmann, leader of the RFB, the fist was a pledge to “protect the friend and fight off the enemy.” But the RFB, founded to guard Communist Party meetings from far-right attacks, battled as much against the Iron Front, the Social Democrats’ street-fighting arm, as it did fascists of the rising Nazi party. In 1932, the RFB rebranded as Antifaschistische Aktion—better known by the contraction antifa. The Nazis took power a year later; Thälmann and hundreds of his comrades died in concentration camps.

Opposition to the Nazis’ atrocities and the creeping spread of fascism across Europe eventually led to a broad-based alliance of communists, socialists, and liberal democrats against bigotry and persecution. This anti-fascist coalition called itself the Popular Front and adopted the raised fist salute from exiled Germans.

The Popular Front pushed back against signs of fascism in democratic nations. In 1936, anti-fascists resisted when the British Union of Fascists attempted to march through Jewish neighborhoods in London. As many as 100,000 dockworkers, children, workers, and members of the Jewish community stood shoulder to shoulder with fists in the air and turned the fascists back.

The events that brought the raised fist back to the United States as a symbol of the fight against racial oppression began earlier that year in Spain. Armed and supported by Hitler and Mussolini, Catholic nationalists and fascists attempted to depose the democratically elected Popular Front government, launching the Spanish Civil War. Some 45,000 anti-fascist volunteers hurried to fight with the Spanish Republicans in the International Brigades, including 2,800 Americans who formed the Abraham Lincoln Brigade.

The Spanish Republic took up the raised fist salute as “a greeting of solidarity with the democratic peoples of the world,” according to Mary Rolfe, an American volunteer.

Among the Lincoln Brigade members were 90 Black soldiers. Back home they’d faced a revitalized Ku Klux Klan, dehumanizing Jim Crow laws, and the harshest impact of the Great Depression. In Spain, they commanded white troops and were received as heroes. (Jim Crow laws created 'slavery by another name.')

“Divisions of race, creed, and nationality lost significance when they met a united effort to make Spain the tomb of Fascism,” wrote Salaria Kea, a Black nurse, in her memoir. “I saw my fate, the fate of the Negro race, was inseparably tied up with their fate.”

By 1937 the Lincolns were commanded by Oliver Law, a communist from Texas who’d served as a buffalo soldier in the U.S. Army, where as a Black man he hadn’t been eligible for an officer’s commission. With the Lincolns, he was elected as much as selected, said Steve Nelson, the brigade’s political commissar. “When soldiers were asked who might become an officer—ours was a very democratic army—his name always came up.”

In Spain, Law said, “I can rise according to my worth, not my color.”

The anti-fascists lost the civil war. Law died leading his men against a machine gun, and the members of the Lincoln Brigade returned to the United States, where they were hounded by the FBI for their leftist politics. But the Lincolns had not forgotten what they learned about unity and strength in Spain, and continued using the raised fist in protests and poster art.

For the Lincoln Brigade veterans, the civil rights movement was another battle in the same anti-fascist war. They desegregated swimming pools, ran NAACP chapters, registered voters, and set up medical outposts when the American Indian Movement occupied Alcatraz. Their militant anti-racism fit the militant anti-racism of the Black Power movement, and the clenched fist became its symbol. Huey Newton and Bobby Seale raised their fists to exhort members of the Black Panther Party. Smith and Carlos raised theirs in the Black Power salute during the Olympics in 1968.

Now the gesture is firmly embedded in anti-racist protests. Celebrities from Damian Lillard, point guard for the Portland Trailblazers, to John Boyega, star of the recent Star Wars movies, have employed it on the front lines of demonstrations. The present-day antifa as well as other social, political, and labor movements still use it, too. (Hear from those calling for racial justice in Washington, D.C.)

As Kea witnessed in Spain, anti-fascism has always been about anti-racism. When Thälmann raised his fist in Germany or Law his in Spain, they might not have been able to imagine Lillard doing the same in Portland or Boyega in London or Huda Ahmed in San Diego. But their message was the same—that we can defeat tyranny when we stand together.

James Stout, a historian and freelance writer, is the author of The Popular Front and the Barcelona 1936 Popular Olympics: Playing as if the World Was Watching .