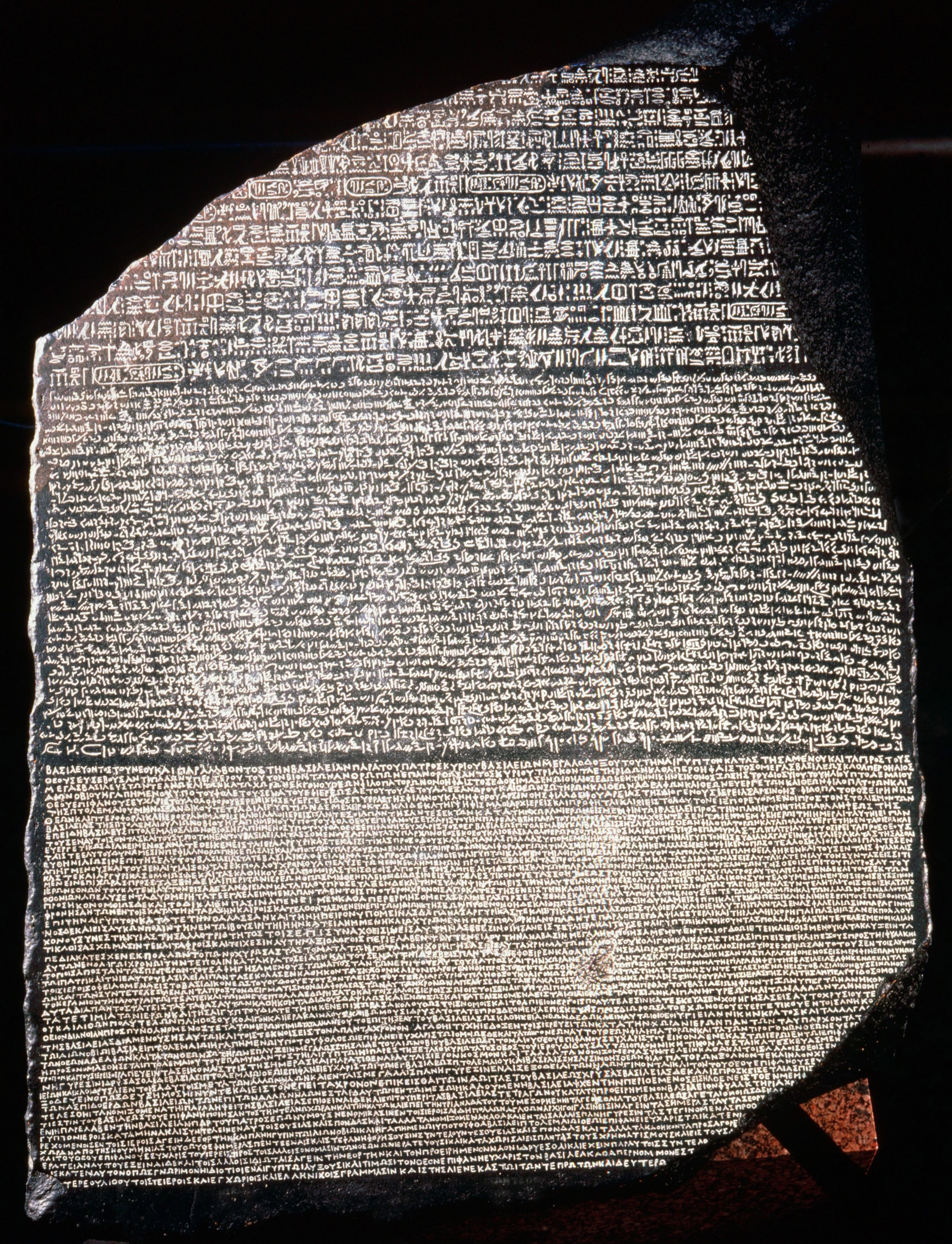 How the Rosetta Stone unlocked the secrets of ancient civilizations

Discovered in Egypt by Napoleon’s conquering forces, this plain-looking slab was the key to cracking the code of Egyptian hieroglyphics.

Although it's just a fragment of a larger rock slab, the letters and symbols chiseled into the face of the Rosetta Stone helped scholars crack the code of an ancient Egyptian writing system—and ultimately reveal the civilization's many mysteries.
Photograph via Universal History Archive/UIG/Bridgeman Images

When Pierre-François Bouchard’s men discovered the ancient stone slab that would change the world on July 19, 1799, they weren’t on an archaeological dig; they were doing a last-minute construction job. The French soldiers occupied a run-down fort in Rosetta, Egypt, and had just days to shore up their defenses for a battle with Ottoman Empire troops.

As the men tore down a wall that had been built using the detritus of nearby ancient Egyptian sites, they discovered a large stone fragment covered in three types of writing, including ancient Greek. Intrigued, Bouchard wondered if the stone might say the same thing in three different languages. He shared his find with French scholars who had come to plumb Egypt for archaeological treasures.

They got more than they bargained for. The slab was the Rosetta Stone, and the letters and symbols carefully chiseled into its dark face would shed light on the glory of ancient Egyptian civilization. But first, scholars would have to crack its code.

A decree of loyalty

Standing at about four feet high and 2.5 feet wide, the granite-like rock is just a fragment of a larger, now lost, stele. But though its text is incomplete, it is invaluable. It consists of a decree affirming the royal cult of Ptolemy V Epiphanes, an Egyptian king who took the throne in 204 B.C.

At the time, the Ptolemaic kingdom was at war and dealing with an internal revolt. The decree was passed by a council of priests who used it to honor the pharaoh and declare their loyalty to him. It was recorded on the stele in Ptolemaic hieroglyphics, Demotic Egyptian script, and ancient Greek script. Identical stelae were to be placed in every temple in Egypt.

The Ancient Egyptian civilization, famous for its pyramids, pharaohs, mummies, and tombs, flourished for thousands of years. But what was its lasting impact? Learn how Ancient Egypt contributed to society with its many cultural developments, particularly in language and mathematics.

Fast-forward to 1798, when Napoleon led French forces to take over Egypt, which was then part of the Ottoman Empire. Scientists and historians were part of the conquering force, and streamed into the country to document what they found there. The Egyptologists gathered a large number of ancient artifacts they wanted to take back to France, including the Rosetta Stone.

But the British wanted Egypt, too, and in 1801 they prevailed over French forces. The French were allowed to evacuate, but the British demanded they hand over the antiquities collection before leaving. So in 1802 the Rosetta Stone made its way to London, where it was put on display at the British Museum almost immediately upon arriving. (Here's why Napoleon's military defeat in Egypt yielded a victory for history.)

But the stone had more than aesthetic value. Scholars had long puzzled over the meaning of the picture-like markings, known as hieroglyphs, made on ancient Egyptian slabs. Since it contained identical content in three languages, scholars thought the Rosetta Stone might be able to help crack the historic mystery.

Scholars raced to translate the Rosetta Stone. Though a variety of scholars across Europe would contribute to the work, the two most important contributions came from England and France.

Thomas Young, a British polymath best known for his scientific contributions, treated the mystery as a mathematical problem. After translating the ancient Greek, he took extensive notes on the hieroglyphs and systematically attempted to match each one to its translation. He also compared the glyphs to those on other statues. Young was able to identify the phonetic sounds some glyphs represented, figure out some of the characters, and piece together how words were pluralized. (Read more about hieroglyphics with your kids.)

But it was Jean-François Champollion, a Frenchman known as the founder of Egyptology, who would ultimately crack the code in 1822. Where Young had no experience with the Egyptian language, Champollion was fluent in Coptic and had extensive knowledge about Egypt. He figured out that the demotic script—the third writing system on the stele—conveyed syllables and that the hieroglyphs represented Coptic sounds.

It was a breakthrough. Famously, an ecstatic Champollion rushed into his brother’s office shouting “Je tiens mon affair!” (“I’ve got it!”). Then he fainted and did not recover for five days.

Champollion used the stone to create an alphabet of phonetic hieroglyphic characters, then other scholars piggybacked on his research to fully translate the stone. The French Egyptologist’s work was eventually validated by the discovery and translation of the Decree of Canopus, another stele written in hieroglyphs, demotic script, and ancient Greek.

The Rosetta Stone’s translation became the backbone of Egyptology, and the iconic stele has been credited as one of the most important objects in history. But the stone itself is controversial as a spoil of war and colonial expansion. Was the Rosetta Stone taken to England or stolen by the British? That depends on who you ask. Over the years, there have been repeated calls to return the stone to Egypt, but it remains at the British Museum, where it has over six million visitors a year.

Why does the plain-looking Rosetta Stone retain such a luster today, two centuries after its code was cracked? Egyptologist John Ray told Smithsonian Magazine’s Beth Py-Lieberman in 2007 that the stone “is really the key, not simply to ancient Egypt; it’s the key to decipherment itself. We knew there were big civilizations, like Egypt, but they’d fallen silent. With the cracking of the Rosetta stone, they could speak with their own voice and suddenly whole areas of history were revealed.”