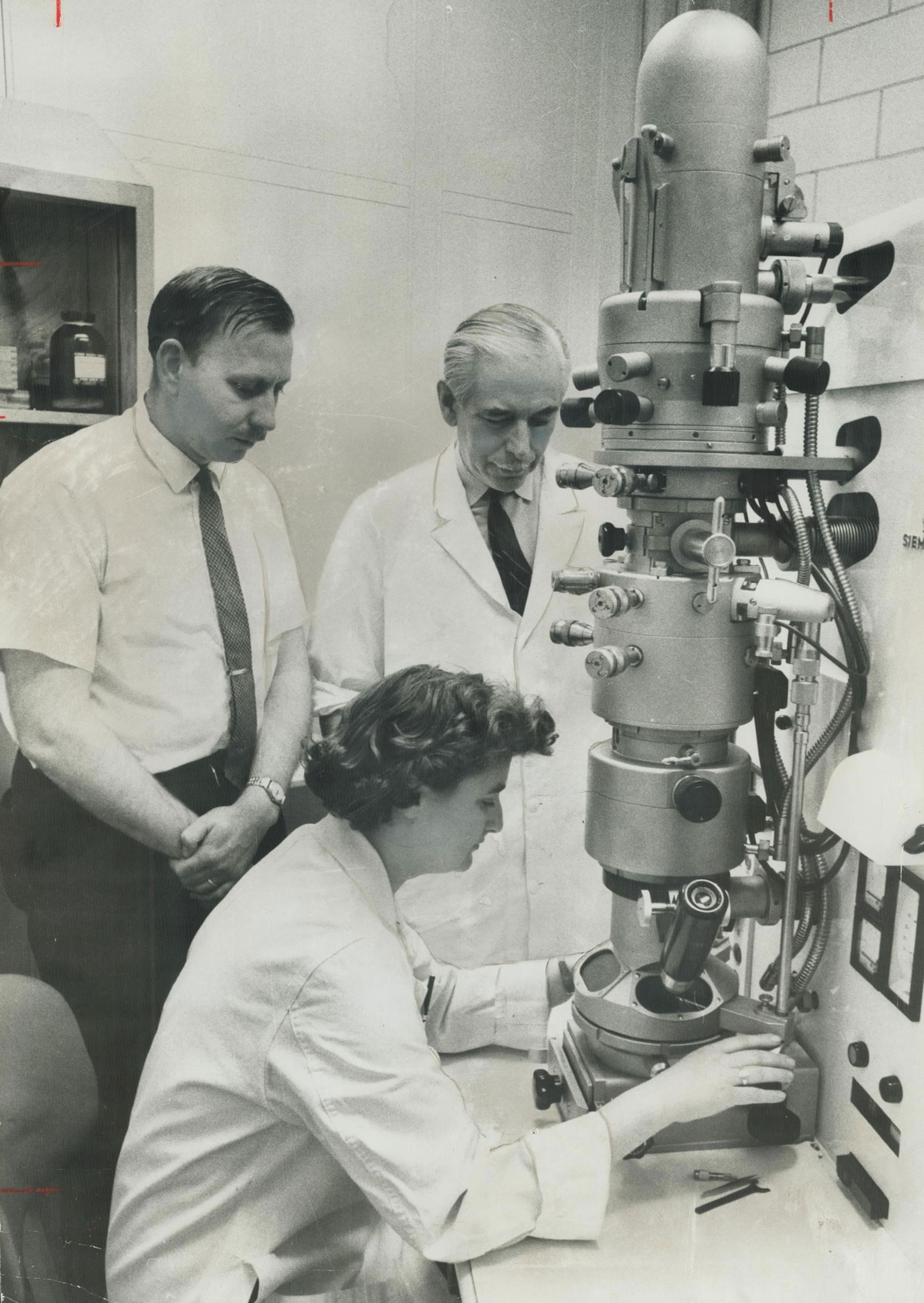 Scientific pioneer June Almeida is finally being acknowledged for virology breakthroughs she made a half century ago.

Scientist June Almeida operates an electron microscope in 1963 at the Ontario Cancer Institute in Toronto, Canada. One year later, Almeida would become the first person to see a coronavirus using microscope techniques she developed.

When June Almeida peered into her electron microscope in 1964, she saw a round, grey dot covered in tiny spokes. She and her colleagues noted that the pegs formed a halo around the virus—much like the sun’s corona.

What she saw would become known as the coronavirus, and Almeida played a pivotal role in identifying it. That feat was all the more remarkable because the 34-year-old scientist never completed her formal education.

Born June Hart, she lived with her family in a tenement building in Glasgow, Scotland, where her father worked as a bus driver. June was a bright student with ambitions to attend university, but money was scarce. At 16, she dropped out of school and started working as a lab technician at Glasgow Royal Infirmary, where she used microscopes to help analyze tissue samples.

After moving to a similar job at St Bartholomew’s Hospital in London, she met the man who would become her husband, Venezuelan artist Enriques Almeida. The pair immigrated to Canada, and June got a job working with electron microscopes at the Ontario Cancer Institute in Toronto. There she developed new techniques and published several papers describing the structures of viruses previously unseen.

New way of seeing the microscopic

The microscopy technique Almeida developed was simple, yet revolutionary for the field of virology.

When working with microscopic particles, it’s hard to know exactly what to look for. An electron microscope blasts a specimen with a beam of electrons and then records the particles’ interactions with the specimen’s surface. Since electrons have much shorter wavelengths than light, this shows scientists an image with much finer, smaller detail. The challenge is discerning if a tiny blob is a virus, a cell, or something else.

To solve the problem, Almeida realized she could use antibodies taken from previously infected individuals to pinpoint the virus. Antibodies are drawn to their antigen-counterparts—so when Almeida introduced tiny particles coated in antibodies, they would congregate around the virus, alerting her to its presence. This technique enabled clinicians to use electron microscopy as a way to diagnose viral infections in patients.

Almeida went on to identify a host of viruses including rubella, which can cause complications during pregnancy. Scientists had been studying rubella (aka three-day measles) for decades, but Almeida was the first to see it.

As her skills gained recognition, Almeida returned to London for a position at St. Thomas's Hospital Medical School. There, in 1964, she was contacted by Dr. David Tyrrell, who oversaw research at the Common Cold Unit in Salisbury, Wiltshire. His team had collected samples of a flu-like virus they labeled “B814” from a sick schoolboy in Surrey, but had considerable difficulty cultivating it in the lab. As traditional methods failed, researchers began to suspect that B814 might be a new type of virus altogether. (There are more viruses on Earth than stars in the universe. Why do only some infect us?)

Running low on options, Tyrrell sent Almeida samples, hoping that her microscope technique could identify the virus. “We were not too hopeful but felt it was worth a try,” wrote Tyrrell in his book Cold Wars: The Fight Against the Common Cold.

Though Almeida had limited materials to work with, her findings exceeded Tyrrell’s best hopes. Not only did Almeida find and create clear images of the virus, but she remembered seeing two similar viruses earlier in her research: one while looking at bronchitis in chickens and the second while studying hepatitis liver inflammation in mice. She had written a paper about both, but it had been rejected. Reviewers thought the images were just poor-quality pictures of influenza virus particles. With the sample from Tyrrell, Almeida was confident they were looking at a new group of viruses.

As Almeida, Tyrrell, and Almeida’s supervisor gathered to discuss their findings, they wondered what to call the new group of viruses. After looking over the images, they were inspired by the virus’s halo-like structure and decided on the Latin word for crown, corona. The coronavirus was born.

Almeida retired from virology in 1985 but remained active and curious. She became a yoga instructor, learned how to restore fine china, and developed a sharp eye for antiques, which she often hunted for with her second husband Phillip Gardner, also a retired virologist.

Before her death in 2007 at the age of 77, Almeida returned to St. Thomas as an advisor and helped publish some of the first high-quality images of HIV, the virus that causes AIDS.

Hugh Pennington, an emeritus professor of bacteriology at the University of Aberdeen, worked with Almeida at St. Thomas and describes her as his mentor. "Without doubt she is one of the outstanding Scottish scientists of her generation, but sadly largely forgotten,” Pennington said in an interview with The Herald. “Though ironically, this COVID-19 outbreak has shone a light again on her work.” (Here's why a COVID-19 vaccine could take longer than a year to develop.)

Today, researchers are still using her techniques to rapidly and accurately identify viruses. Fifty-six years after she first saw a coronavirus through a microscope, Almeida’s work is more relevant than ever.