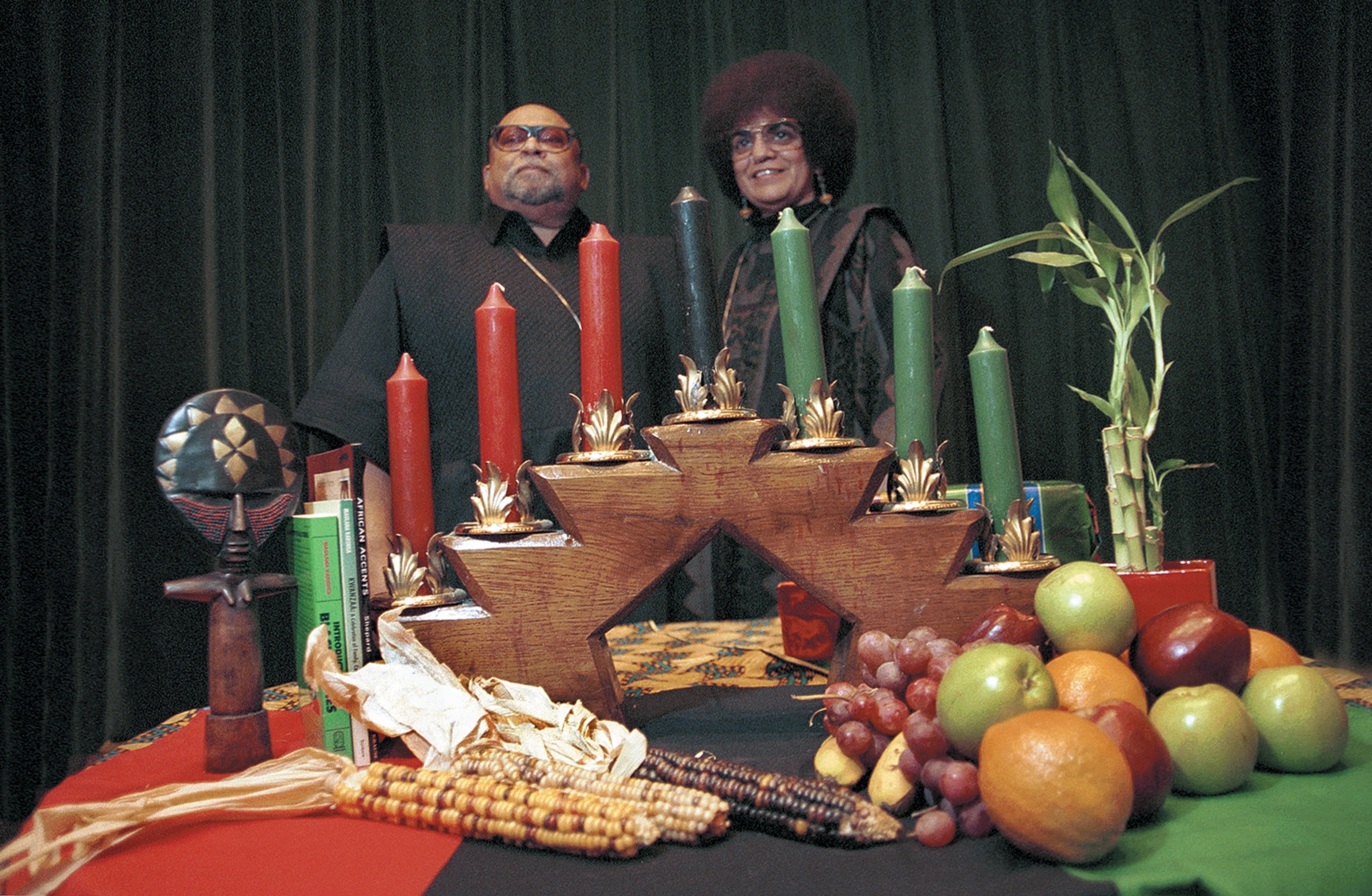 Kwanzaa celebrates African-American heritage. Here’s how it came to be—and what it means today.

Since its founding in 1966, the weeklong holiday has been observed with candle lighting ceremonies, feasts, and reflections on past struggles and future hopes.

Activist Maulana Karenga and his wife Tiamoya celebrating Kwanzaa in 2000. Karenga created the holiday in 1966 as an opportunity for Black Americans to reaffirm their African roots and strengthen their bonds in a time of racial unrest.

Born in a time of racial unrest, Kwanzaa is a weeklong celebration of African-American culture and heritage. This secular holiday takes place every year from December 26 to January 1 and is observed by millions of people in the United States and around the world.

Kwanzaa—which is derived from the word “first” in Swahili—takes inspiration from the start of the harvest season in Africa, when the first crops are gathered. It’s a time that’s been celebrated throughout the continent for generations. During the week, families gather to give gifts, share feasts, and light candles in honor of their ancestors and their hopes for the future.

Though Kwanzaa became a mainstream holiday in the 1980s, its traditions have faded in recent years. Here’s how Kwanzaa came to be, how it’s celebrated, and how it is evolving today.

Kwanzaa was founded in 1966, a year after a historic rebellion rocked the Watts neighborhood of Los Angeles, California. Frustrated by years of abuse at the hands of police and crushed by poverty, the community protested and rioted. The unrest lasted a week and left 34 people dead and 1,000 injured.

In the weeks after the Watts rebellion, Maulanga Karenga—an activist and leader in the Black Power Movement—founded the Us Organization to rebuild the neighborhood and promote a Black cultural revolution that would inspire pride in Black history and achievements, long dismissed and suppressed by the dominant white culture. From the beginning, the plan was to create a holiday for African Americans to honor their African roots and reaffirm their cultural connections. (In this museum, Black America’s story is told like never before.)

Kwanzaa was also envisioned as a secular alternative to the holiday juggernaut that is Christmas. “Since Christmas dominated the calendar at year’s end, engulfing black America in its crass consumerism and its images of a white Christ, Karenga believed Christmas stood in the way of black cultural advancement,” writes historian Keith Mayes, author of the book Kwanzaa: Black Power and the Making of the African-American Holiday Tradition.

To establish the traditions of the new holiday, Karenga drew upon a pan-African set of cultural symbols and practices. In particular, he believed that the annual harvest festivals—in which communities came together to celebrate the fruits of their collective labor—were an apt model for building family, community, and culture.

How Kwanzaa is celebrated

Celebrations begin the day after Christmas and last for seven days. Each day is steeped in symbolism and ceremony. Celebrants begin by decorating a table with a straw mat that symbolizes the traditions at the heart of the holiday’s foundation. Upon that mat, they place other meaningful items, including assorted fruits and vegetables to symbolize their collective labor at the harvest, ears of corn to represent their children, and a candle holder that stands for a shared African heritage. A black candle is placed in the center of the holder, flanked by three red candles to the left and three green candles to the right.

Families and communities gather each day to light a candle and reflect on one of the seven principles of Kwanzaa, or Nguzo Saba in Swahili. On December 26, the holiday kicks off with a meditation on unity (umoja), followed by the principles of self-determination (kujichagulia), collective work and responsibility (ujima), cooperative economics (ujamaa), purpose (nia), creativity (kuumba), and faith (imani).

“It is part of African-American history and in a way that suggests that it’s permanent, it’s never going away."
ByKeith MayesHistorian and Author of Kwanzaa: Black Power and the Making of the African-American Holiday Tradition.

The nightly candle lighting ceremony begins with an elder filling a unity cup with wine or juice, some of which is poured into the earth in remembrance of the family’s ancestors. The elder then drinks from the cup and passes it around to attendees, who join together to chant harambee (Swahili for “let’s pull together”) seven times.

On the first day, the black candle at the center of the holder is lit to represent all people of African descent. The remaining days alternate between lighting the red candles to the left, which represent the blood of the celebrants’ ancestors, and the green candles to the right that stand for earth, life, and the promise of the future. According to the official Kwanzaa website, this order indicates that “the people come first, then the struggle and then the hope that comes from the struggle.”

On the penultimate day of Kwanzaa—which falls on December 31—celebrants typically hold a banquet, or karamu. Filled with music and dancing, this feast is a time to rejoice and renew commitments for personal growth in the year ahead. Families often give children small gifts on this day or on the last day of Kwanzaa.

The holiday struggled for recognition in its early years, writes historian Elizabeth Pleck in the Journal of American Ethnic History. Although some urban communities adopted it, many Christians and Muslims viewed the secular holiday as antithetical to their beliefs. Kwanzaa’s adoption also slowed as the Us Organization unraveled amid internal feuds—including Karenga’s 1971 conviction and imprisonment for torturing two women he believed had tried to poison him.

Yet Kwanzaa continued to spread by word of mouth and, as it did so, the holiday became known as a celebration of Black family life. In the late 1970s and early 1980s, Kwanzaa broke into mainstream Black culture with features in influential magazines. In a December 1976 issue of Jet, actor Roger Mosley described discovering Kwanzaa as an alternative to a commercialized Christmas, saying it was “more in line with the direction I want my children to go.”

Rather than replace Christmas, though, most people began to see Kwanzaa as a way to supercharge their holiday season. By 1983, Ebony wrote that “almost all Black Americans are placing special emphasis on roots and family togetherness in what some social commentators are calling the New Soul Christmas.” In addition to Christmas carols and trees, Kwanzaa gave people a new set of rituals that allowed them to “express their new sense of somebodiness.”

Kwanzaa became widely recognized in the 1980s and 1990s. In 1993, Bill Clinton issued the first U.S. presidential Kwanzaa greeting, saying: “At a time when we are seeking ways to revitalize our neighborhoods and empower those who have been powerless for too long, Kwanzaa encourages us to rebuild and gives us the opportunity to celebrate the strengths of the African American community.” In 1997, the U.S. Postal Service issued its first Kwanzaa stamp.

By the 2010s, however, media outlets such as the Associated Press and the Root were reporting that fewer Black families were celebrating Kwanzaa. In 2012, Mark Anthony Neal, chair of the Department of African & African American Studies at Duke University, told NPR he believed the decline was due to African American studies programs and the internet providing access to Black history and culture to younger generations. (See 13 destinations for African-American history and culture.)

“There's just not that kind of intensity around the holiday that we might have saw in the 1980s, for instance, when I was in college,” he said, explaining that Kwanzaa “was the only way ... to be able to connect to some sort of sense of Black heritage.”

Neal also noted that some people still view Kwanzaa as a “made-up holiday,” given its relatively recent creation. However, he pointed out that Mother’s Day and Father’s Day have similarly invented origins and are widely accepted.

Estimates of how many Americans celebrate Kwanzaa have varied in recent years, from as few as a half a million to as many as 12 million. USA Today reported in 2019 that only 2.9 percent of people who planned to celebrate a winter holiday said they would celebrate Kwanzaa.

In 2020—after another period of racial unrest over the killings of George Floyd, Ahmaud Arbery, Breonna Taylor, and too many others—the Root examined whether the holiday might see a resurgence. But Mayes, the historian, told the outlet that it didn’t matter how many people celebrate Kwanzaa. “It is part of African-American history, and in a way, that suggests that it’s permanent,” he said. “It’s never going away.”