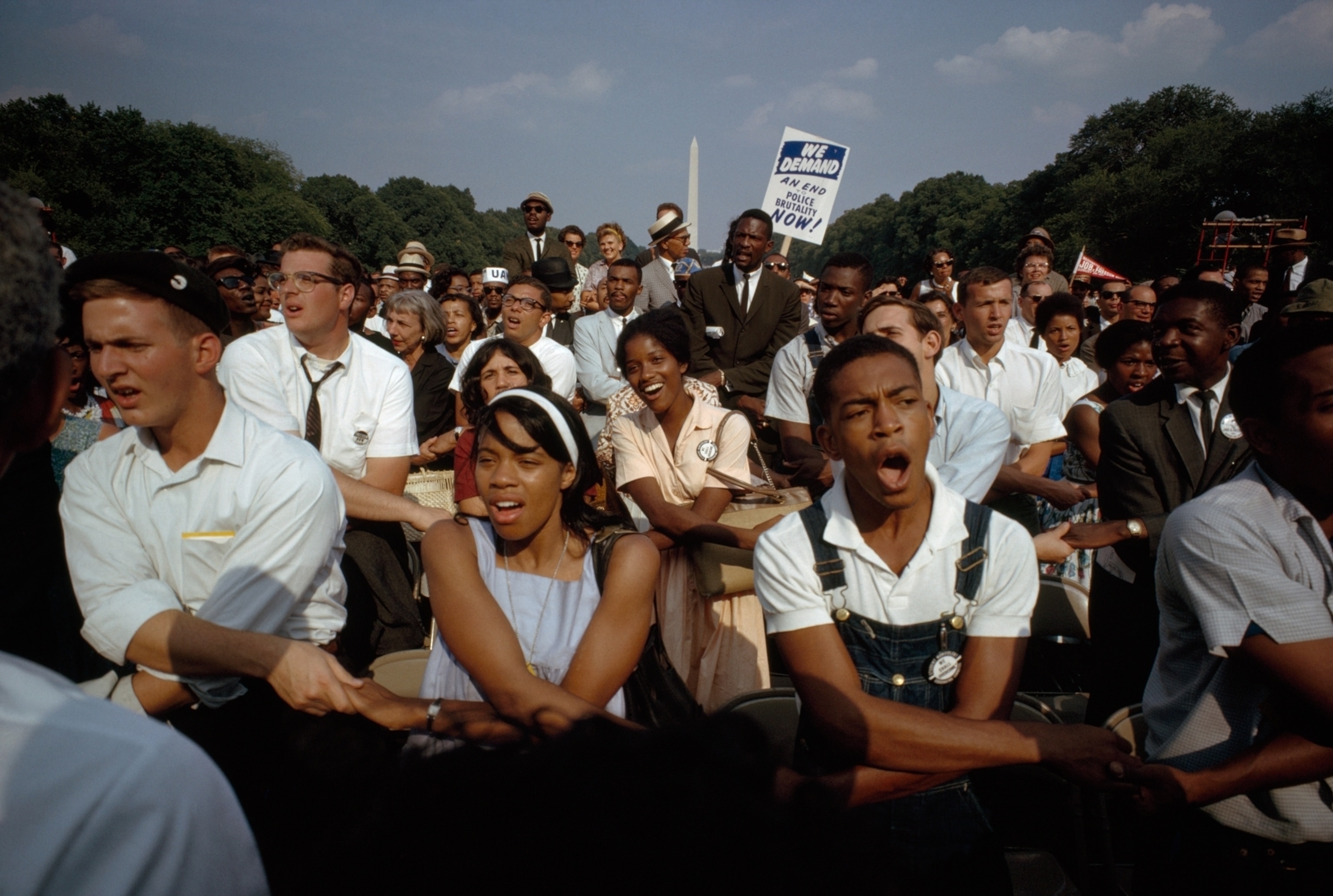 A National Geographic photographer took the day off to document the civil rights march and captured a movement that lives on today.

The 1963 March on Washington for Jobs and Freedom gathered together people from civil rights organizations, labor unions, and religious groups across the country to protest segregation, inequality, and economic injustice. As the sign demanding an end to police brutality demonstrates, many of the issues that motivated the marchers remain unresolved.

On the morning of August 28, 1963, National Geographic photographer James P. Blair left his apartment on the corner of 17th and M Streets in Washington, D.C.

Blair lived only a block from the National Geographic Society, where he’d worked as a staff photographer for a little over a year. But on that day—a Wednesday—he didn’t go into the office. Instead, he walked to the Washington Monument to photograph the March on Washington for Jobs and Freedom.

Organized by leaders of the civil rights movement, including Martin Luther King, Jr., and John Lewis, the march was a culmination of years of frustration over segregation and inequality. More than a quarter of a million people attended, and thousands of journalists converged on the National Mall.

“The event was a magnet for photographers,” says Helena Zinkham, chief of the prints and photography division at the Library of Congress. “People knew it was a seriously special undertaking.”

Photographs from that day have become embedded in the national memory. Blair’s photos, which weren’t part of any official National Geographic coverage and have rarely been published, offer a unique glimpse into one of the most iconic moments in the country’s history.

Blair knew he couldn’t cover the march for National Geographic. “The last thing on the Geographic’s mind in those days was civil rights,” he says, and at the time, the monthly magazine rarely covered news events as they unfolded.

Instead, he took the day off. “This was a day that was really for myself,” says Blair, now 89.

By then, Blair had long been committed to civil rights. For a project during his senior year in college at the Institute of Design at the Illinois Institute of Technology, he photographed a Black family living in a condemned tenement on the South Side of Chicago—postal clerk Armister Henton, his wife, and their young twin girls. He spent several weeks with them in their apartment.

“Their problems and their courage made a huge impression on me,” he says. (Related: See photographer Gordon Park's enduring work about African American life and culture.)

Even though Blair wasn’t attending the march as a National Geographic photographer, he brought his camera and a telephoto lens. And he made sure to be at the front of the crowd as it marched so when it reached the Lincoln Memorial he could find a spot at the base of the steps.

From his vantage point, he could see the vastness of the demonstration. “The crowd stretched along the reflecting pool and to the Washington Monument where we had come from,” he says. It was hot; he saw people cooling their feet in the reflecting pool.

At the Lincoln Memorial, Blair listened to Mahalia Jackson, Bob Dylan, Joan Baez, and others sing, and to Philip Randolph, John Lewis, Roy Wilkins, and others speak—and took photographs all the while.

When the Rev. Martin Luther King Jr. said “I have a dream,” Blair says, “I heard that loud and clear.” When King “raised his hand and he said, ‘Free at last. Free at last. Thank God Almighty, we are free at last,’ I went click, click, click. That was it.”

Blair had captured a defining moment during one of the most iconic speeches in U.S. history, and he’d done it in color, unlike most civil rights photography.

“That’s what makes these photographs so tangible and accessible,” says Aaron Bryant, a curator at the Smithsonian’s National Museum of African American History and Culture. “You can climb into it and see yourself as part of it.”

Blair’s color photographs also make the march seem more modern, says Bryant, who is collecting personal photos of people who were at the march. “We’re dealing with the very same issues in many ways.”

One sign from the march particular upsets Blair now: “We demand an end to police brutality now!”

“What are we talking about? In 2020? Police brutality,” he says. “It’s appalling.” (Hear from those still calling for racial justice today.)

Yet in that same photograph, the multiracial crowd links arms and sings. “It’s the acknowledgement of all those people in that crowd of the commonality of all of us,” he says.

When the march was over, Blair, who retired from National Geographic in 1994, gave his photographs to the Society’s image collection. He is still making pictures.