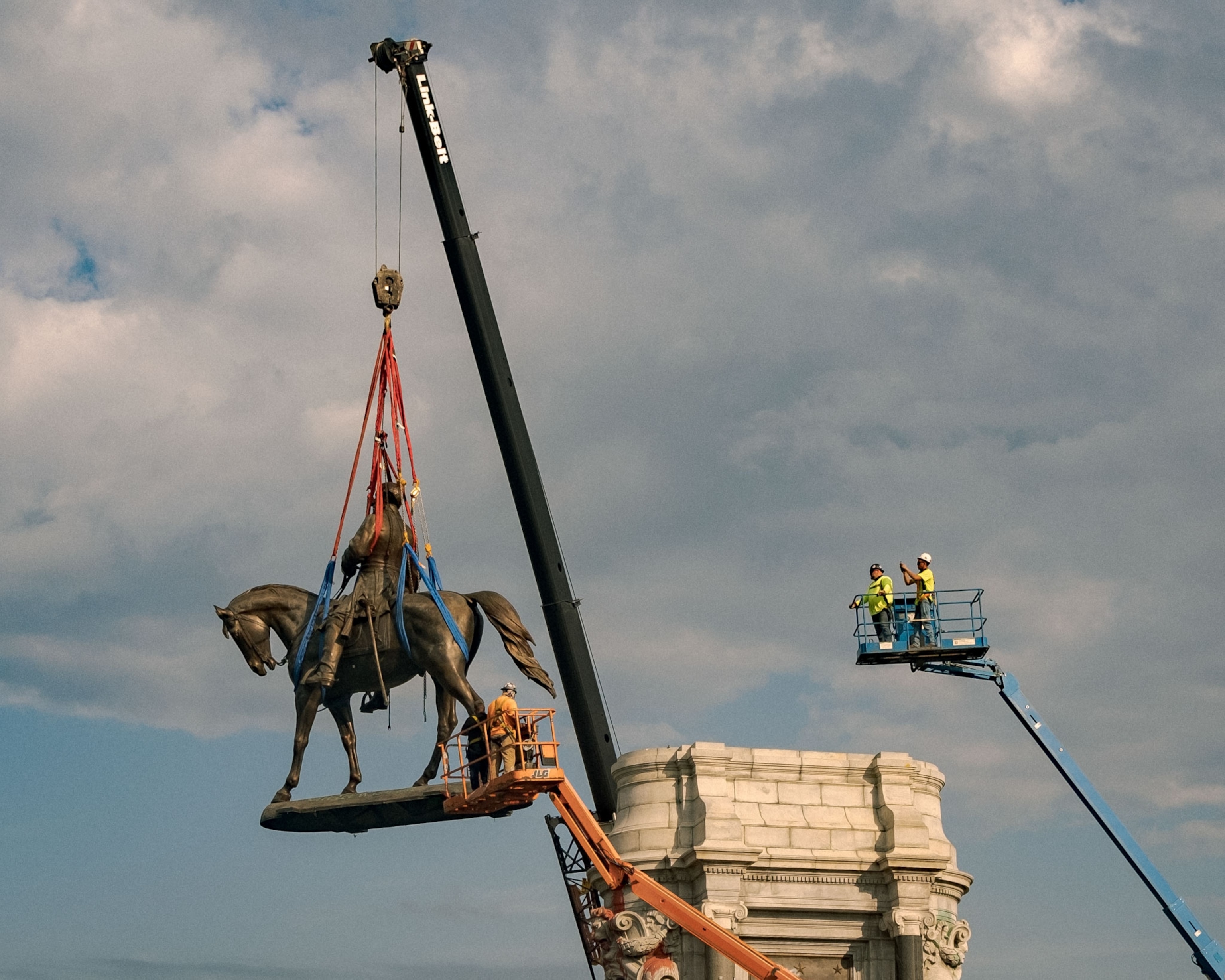 Who do American monuments honor the most? A landmark study finally has answers.

Review of 50,000 historical monuments across the country concludes that they ‘misrepresent our history.’

Joan of Arc is more popular than Alexander Hamilton. Saint Francis of Assisi edges out Robert E. Lee. And there are 11 times more mermaids than congresswomen. These are some of the more surprising findings of the first comprehensive survey of America’s public monuments, the results of which were released today. The report’s creators sifted through nearly half a million federal, state, local, tribal, and territorial records to provide a richly detailed—and deeply revealing—view of the nation’s memorial landscape.

Called the National Monument Audit, the study funded by the Andrew W. Mellon Foundation adds important data to the country’s fraught debate over who and what should be memorialized in America’s public spaces.

“We started as a classroom project asking questions,” said Paul Farber, a co-director of the effort. In 2012, while teaching a course on monuments and urban space at the University of Pennsylvania, he found it difficult to find hard data on the subject. “There is a common misperception that a government agency tracks all monuments—when they were built and to whom they were dedicated. But there is nothing like that.”

Farber and his colleagues set out to obtain what he called “a panoramic view” that could show overarching patterns in the way Americans memorialized their past. The team counted a whopping 50,000 monuments strewn across the United States and its overseas territories.

Abraham Lincoln tops the list of individuals celebrated in public monuments in the United States—a total of nearly 200—with George Washington a close second and Christopher Columbus a more distant third. Less predictably, Casimir Pulaski, a Polish cavalry officer in the Revolutionary War, beat out Thomas Jefferson with 51 memorials to the three dozen dedicated to the author of the Declaration of Independence.

Among the top 50 individuals commemorated, Confederate leaders outperformed women by four to three. Half of this group of 50 owned enslaved people, and all but six of these were white men.

The audit also discovered that American memorials reflect a national focus on violent events. Fully a third commemorate war. For example, while nearly 6,000 reference the Civil War, only nine mention the era of Reconstruction that followed. The study also found that memory of past violence is skewed: Not a single monument recalls any of the 34 massacres of Black Americans recorded during that tumultuous post-war period.

The experience of African Americans is not the only thread of national history neglected in public spaces. The team counted nearly a thousand memorials erected after 1930 celebrating white pioneers but largely avoiding mention of the darker aspects of migration to the West, such as massacres, land grabs, and reneging on solemn treaties with Native Americans.

“The story of the United States as told by our current monument landscape misrepresents our history,” the report concludes. “Where inequalities and injustices exist, monuments often perpetuate them.”

Several historians praised the study for shedding light on a national debate that has generated a lot of heat. “The audit shows just how many Americans don't see themselves reflected in public art,” said Erin Thompson, a historian at John Jay College, CUNY, and author of a forthcoming book called Smashing Statues. “Monuments are supposed to inspire us all, so what does it mean when our monuments make it seem like only wealthy white men are deserving of honor?”

Lexi Cleveland, a Black public historian in Richmond, said the study’s emphasis on “the need for more expansive stories resonates with me.” Cleveland added that she also welcomed what she called “a great body of research that will drive further dialogue.”

That dialogue has grown contentious—and even violent—in the wake of Charlottesville’s white supremacist rally in 2018, centering on statues of Jefferson and Confederate leaders, that turned deadly. The debate intensified after the May 2020 death of George Floyd at the hands of Minneapolis police sparked protests and riots across the nation. The half-dozen rebel memorials on Richmond’s famed Monument Avenue, for example, came down in the summer of 2020. The remaining statue, of Confederate General Robert E. Lee, was removed earlier this month after a legal case that went to the Virginia Supreme Court.

Thompson estimates that some 170 monuments—less than half of one percent— were dismantled in the wake of Floyd’s death. More than 80 percent of those were removed as the result of decisions by municipalities, while the remainder were toppled by demonstrators. The vast majority were memorials to Confederate leaders or increasingly divisive figures like Columbus. (See how memorials to 9/11 help us remember and mourn.)

The monument audit confirmed that 99.4 percent of American monuments remain securely on their plinths following the upheavals of the last year. It also emphasizes that monuments as a group have never been static, and that over time hundreds have been moved, altered, or taken down for a wide variety of reasons—from community repugnance to road construction. “When power shifts and values evolve, monuments are replaced,” said Greg Werkheiser, a cultural heritage attorney in Richmond involved with the dismantling of Confederate statues there.

S. Waite Rawls, retired head of the Museum of the Confederacy and the American Civil War Museum in Richmond, decried the removal of monuments, including one in Richmond to the soldiers and sailors of the rebel cause. “These were guys who typically got drafted, and they should be honored,” he said. “It is like tearing down the Vietnam War memorial.”

Rawls noted that there are now more monuments to African Americans than Confederates in Richmond, pointing out that an African-American group unveiled a statue dedicated to Black emancipation and freedom on September 24.

The monument audit calls for more such memorials that reflect a changing nation, “especially as more locally led artist and grassroots coalitions confront toxic legacies and open up new processes for representing a fuller history in public spaces.” The study is part of a larger $250 million project funded by Mellon, which the foundation says seeks to “transform the way our country’s histories are told in public spaces” by better reflecting “the vast, rich complexity of the American story.”

Since 2015, the Mellon-funded Monument Lab has supported what it calls “participatory action and artistic research” in major American cities, with the goal of enhancing monument diversity. The lab intends to provide $100,000 to each of 10 teams to engage local communities in monument making; more than 200 groups have applied for the grants. Farber said the product might be a traditional monument, a walking trail, or a learning program. An exhibition of the results is planned for next summer.

“My intention as an artist is to create works that honor and elevate the spirit of the community, such as mothers, land workers, immigrants, storytellers, and healers,” said Michelle Angela Ortiz, an artist and activist who has completed more than 50 large-scale art works.

Those seeking to enhance the nation’s memorial landscape said they want federal and state funding support. But Thompson warns that governments seem to be rejecting change. “After the protests began last summer, legislators in 18 states proposed bills increasing the criminal penalties for vandalizing a monument,” she noted. “Meanwhile, 13 state legislatures considered bills that would make even the official removal of monuments more difficult or outright impossible.”

With the audit, however, researchers, lawmakers, and the public have a clear picture by which to judge America’s monumental landscape.

Andrew Lawler is a journalist and author of the upcoming Under Jerusalem: The Buried History of the World’s Most Contested City.