Read Caption
Black-striped salema off Isabela Island in the Galápagos make way for a sea lion. After a 2015 Pristine Seas expedition, a new reserve around Darwin and Wolf Islands added more than 15,000 square miles of protected area that is closed to fishing.

This story appears in the September 2020 issue of National Geographic magazine.

When Enric Sala quit his job as a professor at Scripps Institution of Oceanography in 2007, it was because he was tired of writing death notices. ‘I found myself writing the obituary of the ocean with more and more precision,’ he says. Rather than spend any more of his life documenting the dying, Sala decided to try to safeguard the living in the few remaining patches of ocean where the Grim Reaper had yet to swing his scythe.

These scattered remnants are the last wild places of the sea—the marine equivalent of the remotest tracts of old-growth forest in the Amazon—still undamaged by overfishing, pollution, and climate change. “It was necessary for us to go to places that still look like the ocean as it was 500 years ago,” Sala says. “To go back to the best baselines we have for what a healthy ocean used to be like. These places are the blueprint. They are the instruction manual. Maybe we cannot bring all of the ocean back to this state, but these places show us what the potential is. They give us hope.”

To protect these places, Sala and the National Geographic Society launched the Pristine Seas project in 2008. Over the past 12 years, Pristine Seas has helped create 22 marine reserves, from the giant kelp forests south of Cape Horn to the humpback whale nurseries of Gabon. These make up two-thirds of the world’s fully protected marine areas—covering more than two million square miles in all. Now Sala and his team have set an even more ambitious goal: to see more than a third of the world’s ocean conserved for the purpose not just of sustaining biodiversity but also of replenishing fish stocks and storing carbon.

For Sala, one of the most satisfying aspects of his job is collaborating with local communities in the places he and his team are seeking to preserve. At Pitcairn Island, a British overseas territory in the South Pacific, the Pristine Seas team worked closely with the island’s 50 or so inhabitants, most of whom are descendants of the mutineers of the H.M.S. Bounty, the Royal Navy ship commandeered by members of its crew in 1789.

“We showed them an underwater world they had never seen,” Sala recalls. “Huge schools of barracudas, clusters of giant clams, reef sharks swimming in some of the clearest waters ever measured in the Pacific. We said to them: ‘This is one of the most pristine places on the planet, and it belongs to you. But it is at risk because of foreign fishing vessels that fish illegally in your waters. You have an opportunity to address that.’ ”

The Pitcairn Islanders began to see themselves as heroes of their own story, Sala says, and in 2015, at the islanders’ request, the British government created a 322,000-square-mile marine reserve around Pitcairn and its uninhabited neighbors: Ducie, Oeno, and Henderson.

Far to the west of Pitcairn, in Micronesia, Pristine Seas worked with indigenous Palauans to give an ancient conservation tradition a modern twist. For centuries Palauans have used temporary fishing closures known as buls to preserve and rebuild their reef fish stocks. Over the years they created 35 reserves that protected marine life around their islands, some of which banned fishing permanently. Palau’s president, Tommy Remengesau, asked Sala’s team to compare the abundance of fish inside and outside the no-take reserves. They found that the species targeted by fishers were almost twice as plentiful within the no-take areas.

The team filmed their dives and screened the footage throughout Palau. “We wanted Palauans to see how well their traditional management works and that, as well as protecting their reefs, it benefits tourism,” Sala says. In 2015 Palau’s national congress established a no-take marine sanctuary covering 80 percent of the country’s exclusive economic zone—an emphatic commitment to the idea that a flourishing economy depends on a healthy environment.

That truth isn’t universally acknowledged. In most parts of the world, marine conservation is stymied by opposition from fishing, oil, and mining interests. A mere 7 percent of the world’s ocean has any protection—mostly weak rules, with multiple exceptions—and only 2.5 percent is highly protected from exploitation. Outside of these zones, the ocean’s story is one of continuing depletion. Each human generation grows up with a new normal, a lower baseline of marine diversity and abundance. Most people don’t know what’s been lost.

The loss is a result of disturbed or destroyed habitats, of overfishing, and of climate change that is both warming and acidifying the ocean. Pristine Seas is now reshaping its mission to address all three threats. With a network of no-take marine protected areas (MPAs), Sala believes, it’s possible to benefit biodiversity, food security, and climate simultaneously.

The biodiversity benefit is self-evident—as it is on land, where parks and refuges protect thousands of threatened species. How MPAs benefit fisheries is less obvious. The common perception is that closing areas to fishing hurts fishing interests. But this perception is wrong, Sala argues.

“The fishing industry says we can’t have more no-take areas because we need to catch more fish to feed nearly 10 billion people,” the projected world population in 2050, he says. “But the worst enemy of fishing is overfishing.”

The global fish catch has at best plateaued since the mid-1990s—some researchers say it has actually declined—even as the fishing industry has increased its efforts to catch fish. The reason is that so many fish stocks are depleted and need a chance to rebuild. “Protected areas are not the enemy of fishing,” Sala says. “Our analysis shows that protection of the ocean can produce a net benefit to fishing.”

A case in point is what happened to the Hawaiian tuna longline fishery in the wake of the creation and expansion of two U.S. protected areas in the Pacific. The Papahānaumokuākea Marine National Monument and the Pacific Remote Islands Marine National Monument are among the largest MPAs on Earth; together they’re roughly four times the size of Texas. They provide a haven for corals, fish, birds, sharks, and whales. But because they exclude commercial fishing in what amounts to about a quarter of the entire U.S. exclusive economic zone, fishers argued against them. Some researchers have found, however, that there has been no lasting economic harm to the local fishing industry.

What to expect next

The National Geographic Society launched the Pristine Seas project in 2008 to explore and preserve the ocean. Pristine Seas has conducted 30 expeditions and helped create 22 marine reserves. Its new research indicates crucial areas to safeguard in the future.

Northern Line Is. - Expedition sparked the idea for Pristine Seas

Palau - protects 80% of its waters

Galápagos Is. - Discovered the highest known biomass of sharks 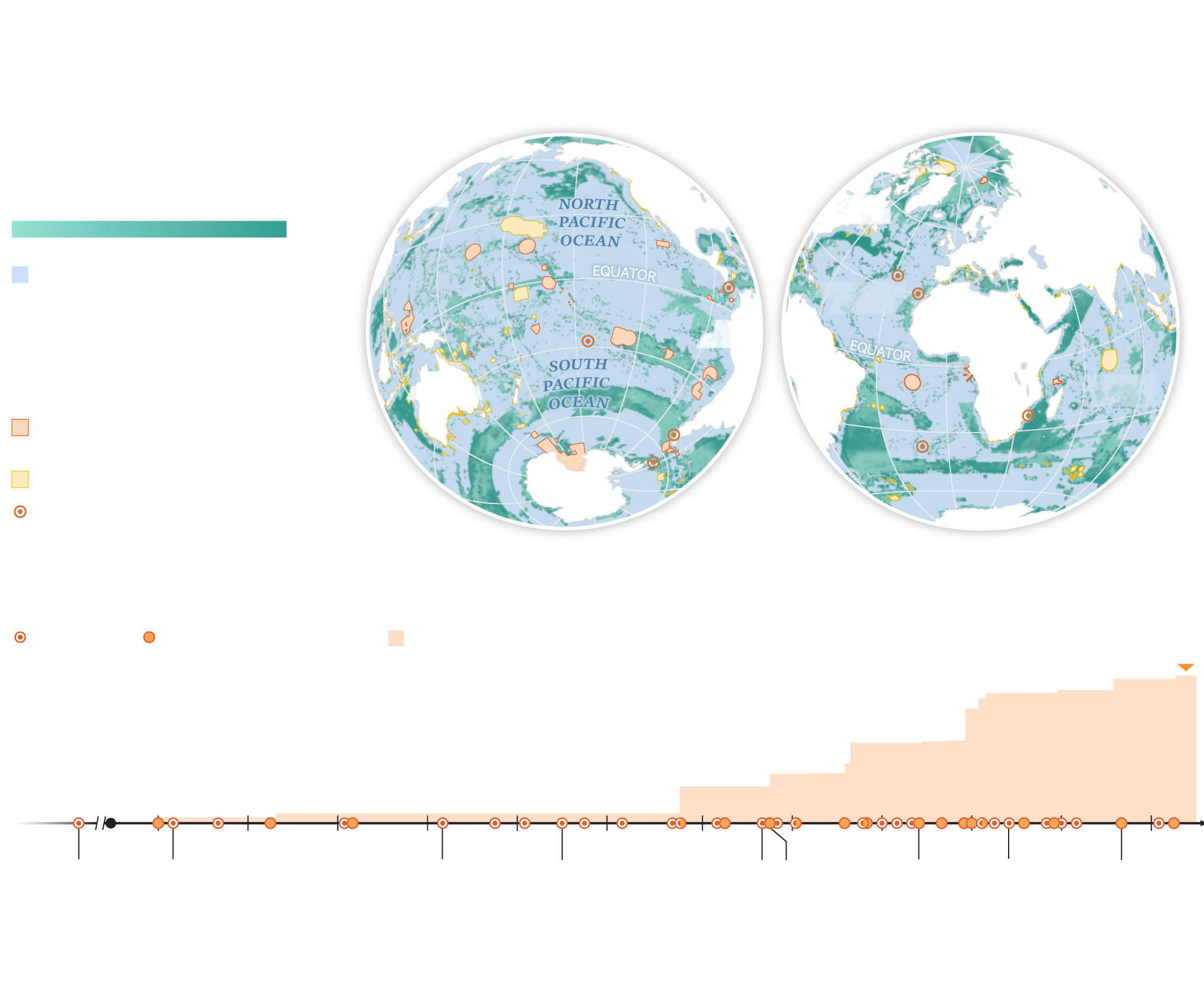 What to expect next

The National Geographic Society launched the Pristine Seas project in 2008 to explore and preserve the ocean. Pristine Seas has conducted 30 expeditions and helped create 22 marine reserves. Its new research indicates crucial areas to safeguard in the future.

While 7 percent of the ocean has some form of protection, only 2.5 percent is highly protected from extractive activities.

Palau protects 80% of its waters

the idea for Pristine Seas

It may seem counterintuitive, but the more fully an area is protected, the greater the benefit to fishers operating outside its boundary—an outcome that has been documented in species ranging from tuna to lobsters to clams. Fully protected marine reserves, Sala says, are like an investment account with an untouched principal: They provide yearly returns in the form of adult and larval fish and invertebrates that spill out of the reserves and replenish the stocks that fishers target.

Still, MPAs are only as secure as the political will to maintain them—including in the U.S., where President Trump has stated that he is inclined to open the nation’s only Atlantic marine national monument to commercial fishing.

The climate benefit of MPAs arises because carbon dioxide is the main greenhouse gas in the atmosphere and marine sediments are one of Earth’s main carbon reservoirs, storing more carbon than soils on land. Undisturbed sediments can lock up carbon for thousands of years. When sediments are disturbed by bottom trawling or seabed mining, the stored carbon is released back into circulation.

Just as there’s more than one reason to save a forest, there’s more than one benefit to protecting the ocean, and that makes the case for doing so more compelling. “We cannot think of biodiversity in isolation anymore,” Sala says, “and we cannot think of climate in isolation. It will be impossible to achieve the goals of the Paris climate agreement”—to keep global warming from exceeding the widely accepted disaster threshold of two degrees Celsius, or 3.6 degrees Fahrenheit—“unless we have a significant proportion of the planet in a natural state.”

How large a proportion? Sala and his team calculate that a 14-fold expansion of the fully protected part of the ocean, from 2.5 percent to 35 percent, would provide 64 percent of the biodiversity benefits and shield 28 percent of vulnerable carbon while increasing the global fish catch by almost 10 million metric tons. If instead of pursuing strictly national priorities, countries cooperated to set aside the most strategic areas of the ocean, they could achieve the same results by protecting less than half as much area.

Even that may sound impossible. But the alternative is dire. Do we want to keep writing and reading marine obituaries, or do we want our children to inherit an abundant, flourishing ocean? For now, we still get to choose.