Revealed by powerful earthquakes, the subterranean structures offer exciting new clues to why our planet is a chemical oddball.

Right now, you could be unknowingly standing on top of a mountain.

Though it sounds like a fantastical feature of Jules Verne's Journey to The Center of the Earth, subterranean mountains are real, albeit different from any novelist's envisaged landscape. This strange range is part of the layered structure of our planet, rippling along a geologic boundary some 410 miles down. It contains tremendous peaks, with some that may tower even higher than the mighty Mount Everest.

Now, scientists have got their best look yet at these subsurface mountains using the seismic waves from multiple big earthquakes. Published recently in Science, their analysis suggests that the peaks are not just tall, but surprisingly rugged—a discovery that could provide clues to why Earth is a chemical oddball in our solar system.

“Because we’ve been able to observe so much already, people think we’ve made most of the first-order discoveries and that everything else is adding details to the fundamental discoveries,” says Christine Houser, a global seismologist at the Earth-Life Science Institute at Tokyo Institute of Technology.

But as this study shows, “we’re still capable of making fundamental discoveries of the interior of our own planet.”

Earth's mantle makes up around 84 percent of our planet's bulk and works like a geologic recycling center. Its slow convection drives the steady march of plate tectonics, which sends slabs plummeting into its depths. Meanwhile, rising magma bursts free at the surface, bringing up a fresh supply of minerals.

“Almost everything about how life has evolved kind of relies on this fluxing of elements from the surface,” says Elizabeth Day, a deep-earth seismologist at Imperial College London who was not part of this work. “We need slabs to sink down, and volcanoes to erupt, and all these sorts of things to support the cycles that we have on Earth.”

But just how much our mantle flows and mixes remains unknown. Think about it like a yogurt cup with fruit on the bottom; how well has convection stirred the sweet jelly up through the tangy dairy product?

This is an important question, because compared to other rocky bodies in our solar system, Earth appears to be missing some elements. For instance, chondrites are stony meteorites that scientists think may be remnants of ancient planetary formation. If so, they should be similar in composition to Earth rocks. But in contrast to chondrites, Earth's upper mantle has a relatively low amount of silicon compared to its magnesium.

That's where deep mixing may come into play. Some of the “missing” elements, like iron, could be relegated to the planet's core, but it's not clear where others might be hiding. Part of the problem is it's tough to figure out what lies miles beneath our feet.

Previous work using earthquake waves showed that these seismic signals dance around the boundary 410 miles deep in ways that suggest the rocks below are denser than those above. Other hints come from the chemistry of volcanic rocks, remnants of once melted mantle, and rare hunks of mantle brought to the surface.

The picture that has emerged is far different from the standard yellow and red layers seen in most Earth diagrams; much of the upper mantle likely sparkles with vibrant green olivine, while more dark rosy garnets mixed with blue minerals twinkle above the boundary 410 miles down, and earth-toned bridgmanite sits below.

mountains deep within the Earth.

The border between Earth’s surface rock and its atmosphere is distinct, due to differences in chemistry, temperature, and pressure.

A boundary also exists deep underground, between the upper and lower mantle. If temperature and pressure alone were responsible for the distinct difference in the mantles, the layer would be smooth.

But researchers found craggy mountains along part of the boundary, which suggests that chemistry may be responsible for the difference. 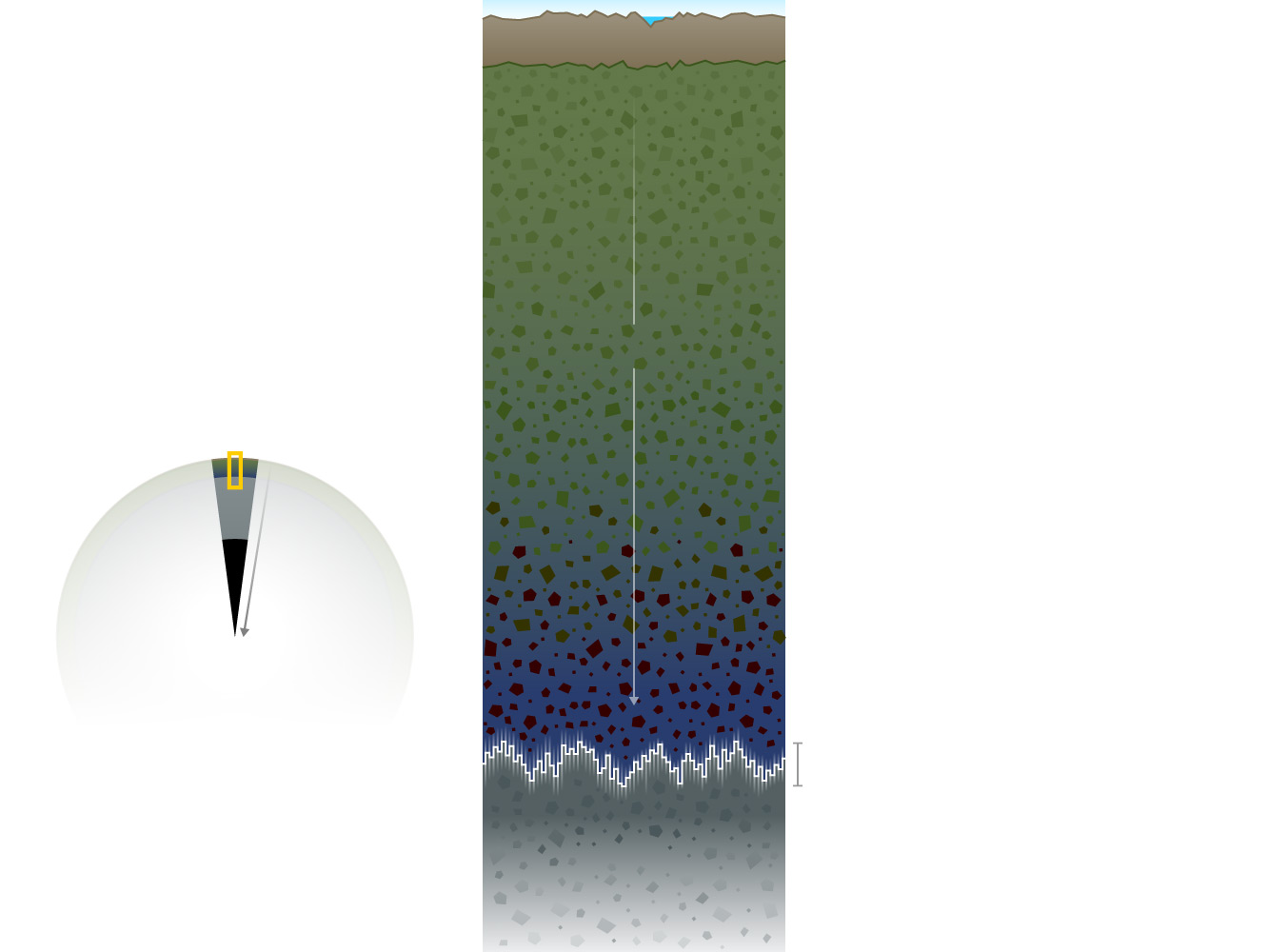 The border between Earth’s surface rock and its atmosphere is distinct, due to differences

A boundary also exists deep underground, between the upper and lower mantle. If temperature and pressure alone were responsible for the distinct difference in the mantles, the layer would be smooth.

The boundary can fluctuate

But researchers found craggy mountains along part of the boundary, which suggests that chemistry may be responsible for the difference.

Institute of technology and

Most scientists agree that the changes in density are from physical rearrangements of elements into different crystal structures, similar to graphite turning to diamond at high pressure and temperatures, explains study leader Wenbo Wu, who conducted the work as a Ph.D. student at Princeton University. But there could be chemical differences, as well.

“Maybe our understanding of what Earth is made of is hampered by the few samples we have of what the mantle is like,” says Jackie Caplan-Auerbach, a seismologist at Washington University.

To peer into Earth's innards for this latest work, Wu and his colleagues turned to the reverberations from really big earthquakes. Wu, who is now a post-doc at California Institute of Technology, likens the process to light reflecting off a mirror. If that mirror is perfectly flat, the light reflects cleanly. But add some bumps and curves to the mirrored surface, and those returning rays will scatter.

“This is a similar idea as our study,” Wu says. “The difference is we are looking at seismic waves.” In particular, the team harnessed the power of earthquakes that rung Earth like a bell, sending waves all the way through our planet and back again, to look at scattering from its interior structures. To accomplish this feat, the researchers looked for earthquakes that were at least magnitude 6 and that started fairly deep. They then compiled the signals from multiple quakes in the hope that patterns would emerge that could reveal details about subterranean landscape.

A vault of early Earth

These big earthquakes dug up some surprising information: Some regions of the boundary where the deep mountains reside are remarkably rugged, with towering crags rising from the flanks of the subterranean peaks. While it's hard to give the exact heights of the rough regions, Wu says, their presence points to some kind of chemical differences in the mantle.

The authors suggest that the ruggedness could be a graveyard for rocky slabs that descended from the surface at subduction zones, where one tectonic plate gets shoved beneath another. As a slab sinks down, pieces eventually break free and continue their slide into the deep. But, it seems, some may get hung up 410 miles down, and the piling up of these slabs might be what creates the rough, craggy part of the boundary zone.

That, in turn, would point to regions where the mantle isn't mixing. Other boundary regions appear smooth and thus are perhaps mixing much more freely, hinting that, on the whole, the mantle has regions of deep mixing and zones that are slower to intertwine.

What's more, the work hints that Earth's “missing” elements may lurk under these rugged areas. As Houser explains, some zones of the lower mantle may have resisted mixing since Earth's early years, keeping some chemical components trapped in the depths. The trick is that it's tough to say exactly how long these features have been around.

“The picture we saw now, it doesn’t mean it's the same as many million years ago,” Wu says.

Still, it's a tantalizing clue, as Houser writes in a News and Views article accompanying the study. While parts of the mantle are certainly in an active churn, “it appears that the lower mantle is also a vault—preserving relic of the time when Earth emerged from dust to become a card-carrying planet.”