Shocking evidence suggests that the last time the East Antarctic ice sheet collapsed, it added over 10 feet to sea level rise, and that it’s likely to happen again.

A new study concludes that the East Antarctic ice sheet last collapsed much more recently than believed, and that it could happen again over the next centuries.

Shocking evidence suggests that the last time the East Antarctic ice sheet collapsed, it added over 10 feet to sea level rise, and that it’s likely to happen again.

A rare, translucent, black-and-white crystal that sat in a box for 30 years has led scientists to a startling discovery: The East Antarctic ice sheet, which holds 80 percent of the world’s ice, may be even more vulnerable to warming than once believed.

Scientists had determined that this ice sheet last retreated about three million years ago. But a new paper in the journal Nature suggests—based on a study of crystals collected from the region—that a large part of it collapsed only 400,000 years ago. Most startling of all, the team’s calculations suggest that the dramatic change happened during an extended but relatively mild warm spell. 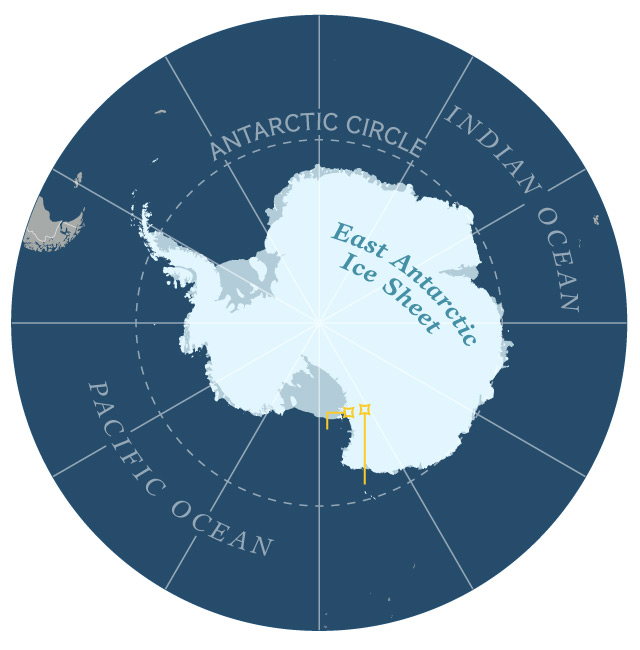 During that time period, the amount of carbon dioxide in the atmosphere never rose very high, peaking at only about 300 parts per million (ppm), says David Harwood, who studies Antarctic glacial history at the University of Nebraska in Lincoln.

“That’s the scary thing,” says Harwood. Modern carbon dioxide levels blew past 300 ppm way back in 1915—and they currently sit at 410 ppm. In the coming centuries, that extra carbon dioxide could raise temperatures, and sea level, well above what happened 400,000 years ago, he says. “This doesn’t bode well for the future.”

The world’s other ice sheets, including those in Greenland and West Antarctica, are already predicted to lose ice in the coming century. Greenland sits far from the North Pole, exposing it to warm air, and West Antarctica sits in a broad bowl that dips below sea level, exposing it to warm ocean currents. But the East Antarctic ice sheet was considered more secure, because it occupies the frigid South Pole, and most of it sits on land that shields it from the ocean’s warmth.

“For decades, the East Antarctic ice sheet has been dressed in this armor of invincibility,” says Slawek Tulaczyk, a glaciologist at the University of California, Santa Cruz, who took part in the research. To speak of it shrinking “was, until recently, unthinkable.”

If these new findings bear out, then East Antarctica may contribute to sea level rise sooner than expected. The greenhouse gases that humans have produced to date may have already locked in 42 feet of eventual sea level rise from all of the glaciers predicted to melt in the coming centuries, including the ones in East Antarctica.

This discovery stemmed from a study of the delicate layers of a black-and-white crystal from deep beneath the ice sheet. Tulaczyk and Terry Blackburn, a geochemist at UC Santa Cruz, happened upon the crystal while studying something else. It began in 2017, as they visited Taylor Valley, on the coast of East Antarctica, to investigate a mystery: Measurements by them and other scientists had shown that water seeping through the ground there was unusually high in uranium.

“This signal was coming from somewhere else” further up the valley, says Graham Edwards, Blackburn’s doctoral student who was also on that trip. And so they went looking for the source of the uranium signal, hoping it might reveal something interesting about the history of the ice sheet.

Although most people know uranium as a nuclear fuel, tiny traces of it are found throughout the world’s rocks, rivers, and oceans. Most of it exists in a heavy form, called uranium-238. But mixed in with it, scientists always find a few atoms of a lighter version, called uranium-234, which is produced when its heavier cousin undergoes radioactive decay. Across the world’s oceans, the ratio of these two forms is relatively constant—about one atom of uranium-234 for every 16,000 atoms of uranium-238.

Scientists theorize that when an ice sheet covers a continent for a long time, the water trapped under it slowly accumulates uranium-234. This happens as uranium-238 in the rocks and gravel under the ice decays, tossing atoms of light uranium into the water, where they accumulate over time.

The water seeping through Taylor Valley is unusual because it holds two to five times the usual level of the lighter uranium-234. “Those fluids have been in contact with rock for a significant period of time,” speculates Blackburn.

Measuring the amount of uranium-234 under the East Antarctic ice sheet could therefore provide clues about how much time has passed since the ice sheet’s most recent retreat.

However, no one had ever measured uranium-234 under an ice sheet. So Blackburn, Edwards, and Tulaczyk set out to try to find minerals that formed in the water beneath the one in East Antarctica. Those rocks might record how much uranium-234 was in the water where they were created, which could, in turn, reveal when the sheet had last melted.

Finding rocks from under the ice sheet might sound like a pipe dream, but Tulaczyk and Blackburn knew of a place where rocks from beneath the ice make their way to the surface, an area called Elephant Moraine, just over the mountains from Taylor Valley.

Thousands of rocks cover the ice there. They are lifted from the bottom of the ice as it oozes over a buried mountain ridge, like a wave breaking at a glacial pace. Constant dry winds evaporate the ice surface by several inches a year, so the rocks eventually make their way to the surface.

During the 1980s, a scientist from Ohio State University collected hundreds of rocks from Elephant Moraine. Most were granites, sandstones, and basalts that formed before the ice sheet covered the continent. But among these, he found a few mysterious chunks of crystal, which sat in the collection for 30 years, until Blackburn read about them and acquired three from OSU’s Polar Rock Repository in 2019.

One of the rocks was especially striking, with paper-thin alternating bands of creamy-white opal and amber or black calcite stacked like tree rings throughout.

Blackburn chipped off individual layers and determined their ages by measuring their uranium-234 and another radioactive element, thorium-230, which the uranium decays into at a known rate. He found that the layers in the fist-sized rock had formed over a span of 120,000 years, starting about 270,000 years ago.

Next he measured the percentage of the lighter uranium-234 in each layer. He thought it would be constant from one layer to the next—because, he says, “there are these ideas that the East Antarctic ice sheet had been stable for millions of years.”

To his surprise, the crystals told him something very different: The amount of uranium-234 in successive layers actually grew by 50 percent. In the precise world of geochemistry, “this is a massive change,” says Blackburn. Two other layered crystals from Elephant Moraine showed similar results.

That finding could mean only one thing: The East Antarctic ice sheet had retreated more recently than anyone thought. When the ice disappeared, the water beneath it spilled into the ocean—resetting the amount of uranium-234 back down to a low level. Only after the ice sheet grew back did uranium-234 once again start to accumulate under it; it was that accumulation that was captured in the crystals.

This wasn’t a small retreat, either, says Tulaczyk. For seawater to approach Elephant Moraine, the ice would have had to retreat 400 miles from its present-day coastline. Elephant Moraine sits on the edge of a vast area, called Wilkes Basin, where the rocky, icy bed drops as far as 5,000 feet below sea level—exposing the ice to deep ocean currents that could have melted its underside.

Tulaczyk estimates that over an area of 115,000 square miles (about the size of Arizona), the ice sheet thinned by thousands of feet—until it peeled off its bed and floated on the ocean. Weakened, it couldn’t support as much ice upstream, and the Wilkes Basin lost more than 250,000 cubic miles of ice, enough to raise the sea level 10 to 13 feet.

The new results fill in much-needed details, says Maureen Raymo, a marine geologist at the Lamont-Doherty Earth Observatory in New York. She studies ancient shorelines around the world that now sit high above the waves, complete with sand, shells, and fossil shrimp burrows. Those shorelines show multiple times when sea levels were higher in the past, including 400,000 years ago, when she estimates that they peaked somewhere between 33 and 42 feet higher than today’s levels.

Greenland, West Antarctica, and other glaciers globally might contribute 30 feet of rise if they melted. Adding another 10 to 13 feet from the Wilkes Basin in East Antarctica “is completely consistent” with those estimates, says Raymo.