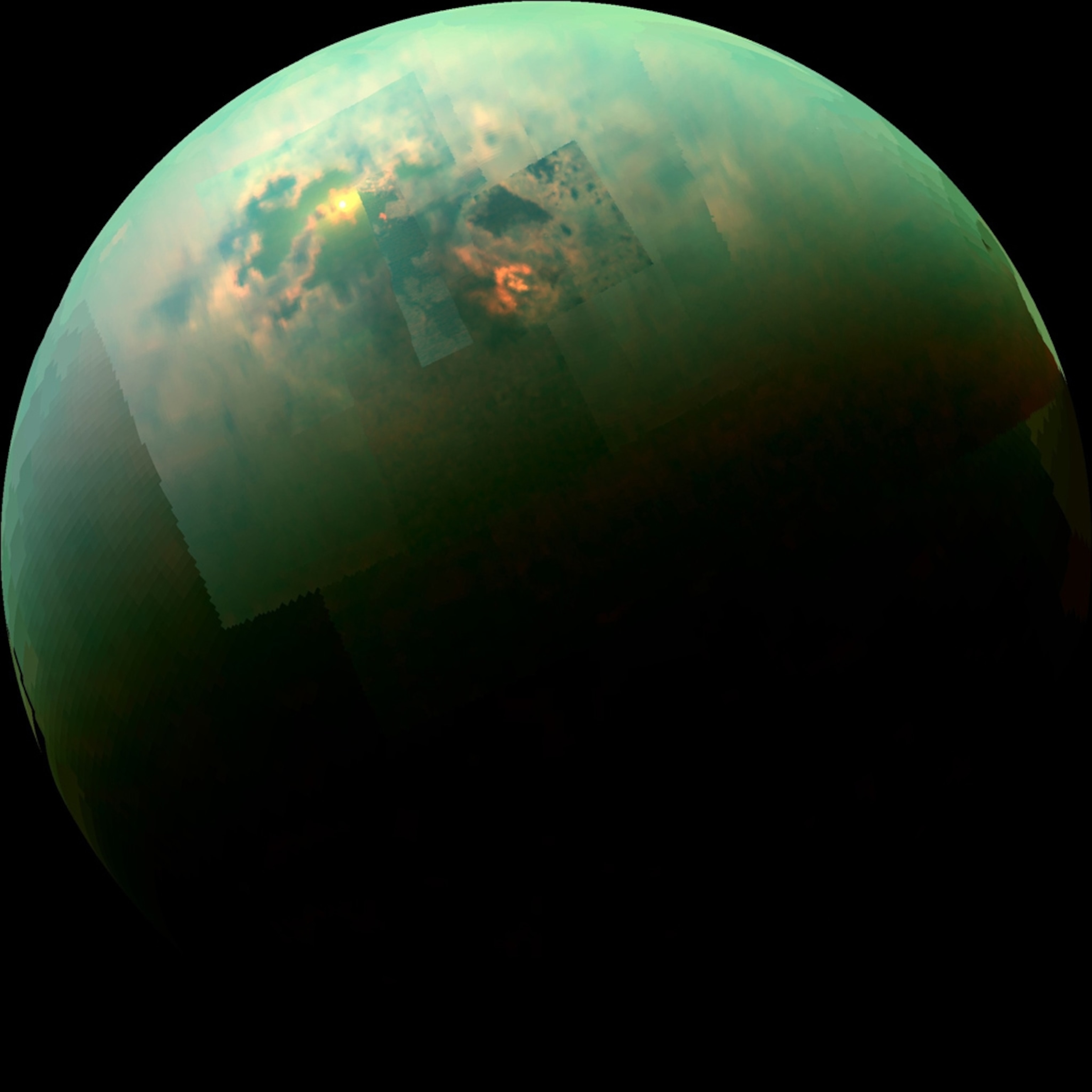 The discovery is helping researchers understand what might linger on the bizarre surface of Saturn's moon Titan.

This near-infrared, color mosaic from NASA's Cassini spacecraft shows sunlight glinting off of Titan's north polar seas. Research here on Earth now suggests that when these frigid seas of hydrocarbons evaporate, they may leave behind tiny crystalline grains of unusual mixes of organic compounds.
Image by NASA/JPL-Caltech/University of Arizona/University of Idaho

Morgan Cable crafts alien environments in miniature. She can stir up a shot-glass-size lake, unleash gentle spritzes of rain, and whip up other wonders to mimic the bizarre surface of Saturn’s moon Titan. In this far-flung world, temperatures plunge hundreds of degrees Fahrenheit below zero, and rivers of liquid methane and ethane sculpt valleys into a frozen landscape of water ice.

“We can, in a way, touch Titan here in the lab—even though it’s millions of miles away,” says Cable, who is a scientist in the Astrobiology and Oceans Worlds Group at NASA’s Jet Propulsion Laboratory.

While they’ve been working with these mini worlds for years, the team’s latest tiny Titan facsimile is making waves: By mixing acetylene and butane in a novel way, they’ve created a previously unknown type of “mineral.” The new substance doesn’t precisely fall under the common definition of an earthly mineral, since it still requires confirmation that it can form in nature. Instead, it is technically known as a co-crystal.

This strange substance likely can’t form naturally on Earth, but it might be abundant on the hydrocarbon-rich surface of Titan, the scientists report in the journal ACS Earth and Space Chemistry. If so, the discovery offers new ways of studying this intriguing moon’s evolution and environments—including its potential to host life unlike anything seen on Earth. (For instance, other scientists recently found the building blocks for vinyl-based life on Titan.)

“We had our fingers crossed that it would do something interesting,” Cable says of the experiment.

A gem of a find

Several years ago, Cable and her colleagues were reading about curious formations around Titan’s famous hydrocarbon lakes. Data from NASA’s Cassini mission to Saturn suggested that as the lakes dry up, a mysterious substance is left behind, like the scummy ring that lingers after draining a bathtub. The team wondered, what could these remnants be made of? (Explore Cassini’s grand tour of the Saturn system with our interactive.)

As they began puzzling through the possibilities, the researchers started with the notion that it should be the least soluble substance in Titan’s methane and ethane lakes. So, they targeted benzene and ethane, which resist mixing like oil and water. If some of the lake liquid were to evaporate, they reasoned, benzene would be the first thing left behind.

In the lab, a mix of these compounds did indeed form crystals. To learn more about them, the team fired lasers at the crystals and recorded what scattered back, a method known as Raman spectroscopy, which can reveal information about the interactions between molecules and the nature of their chemical bonds.

“One of my colleagues took a look at the spectrum and said, Huh that’s weird,” Cable recalls. It seems benzene arranged itself around the ethane into an unusual organic crystal. Buoyed by this result, the team started trying other combinations of Titan substances to see what might form.

For the latest work, they turned to two substances likely common on the moon’s surface, acetylene and butane. Both of these compounds are gas at room temperature and pressure, so they pumped the duo into a small freezing chamber, where the gases encountered a chilled microscope slide. There, they condensed and eventually rearranged into the newfound co-crystals.

The team was also curious how stable the odd substance would be at Titan’s surface temperatures and pressures. The answer: pretty stable. They tried dumping liquid ethane on top of the crystals, like what might happen during a Titan rain shower. The co-crystals remained stubbornly solid.

The discovery represents a shift in how scientists are thinking about far-flung worlds toward more complex thinking, says the University of Washington’s Baptiste Journaux, who was not part of the study team.

The same goes for other planets and moons. And Titan in particular seems eerily familiar to us on Earth because of its environmental complexity. Dunes undulate around the moon’s equator. Icy “pebbles” lie scattered across its plains. Lakes and seas splay across its surface. Foam can even form at the edges of the lakes. But Titan’s chemistry is remarkably unlike Earth's, with a toxic array of organic compounds that cycle through the environment. (Find out what we learned from the only spacecraft that’s ever landed on Titan.)

If the newfound mineral really exists on Titan, being able to create and manipulate it in the lab might help explain more about the ways the moon’s unique physical features form and evolve. What’s more, acetylene-munching microbes on Earth can draw energy from the organic compound. Perhaps the proposed Titan mineral acts as a concentrated food source for extraterrestrial microbes—though any talk of alien life on Titan remains speculation. Journaux, who is also part of the NASA Astrobiology Institute, cautions that just because an environment seems habitable, doesn’t mean it’s inhabited.

“I’m very excited about the work, it’s cool stuff,” says Martin Rahm, an assistant professor in theoretical chemistry at Chalmers University of Technology in Sweden. “There seems to be few people doing this kind of work, and I suspect there’s a lot of co-crystals to be discovered.”

Researchers will soon learn more, with the eventual launch of NASA’s Dragonfly mission, a dual-quadcopter that is slated to touch down on Titan in 2034. In the meantime, the team plans on continuing to explore mixtures of Titan compounds, perhaps venturing into more complex combinations with three organic substances. They also want to study the properties of these odd co-crystals—and perhaps even eventually be able to predict when others might form in the wild.

“We’re not there yet,” Cable says. “Right now, we’re having too much fun mixing all sorts of things in the lab and seeing what happens.”