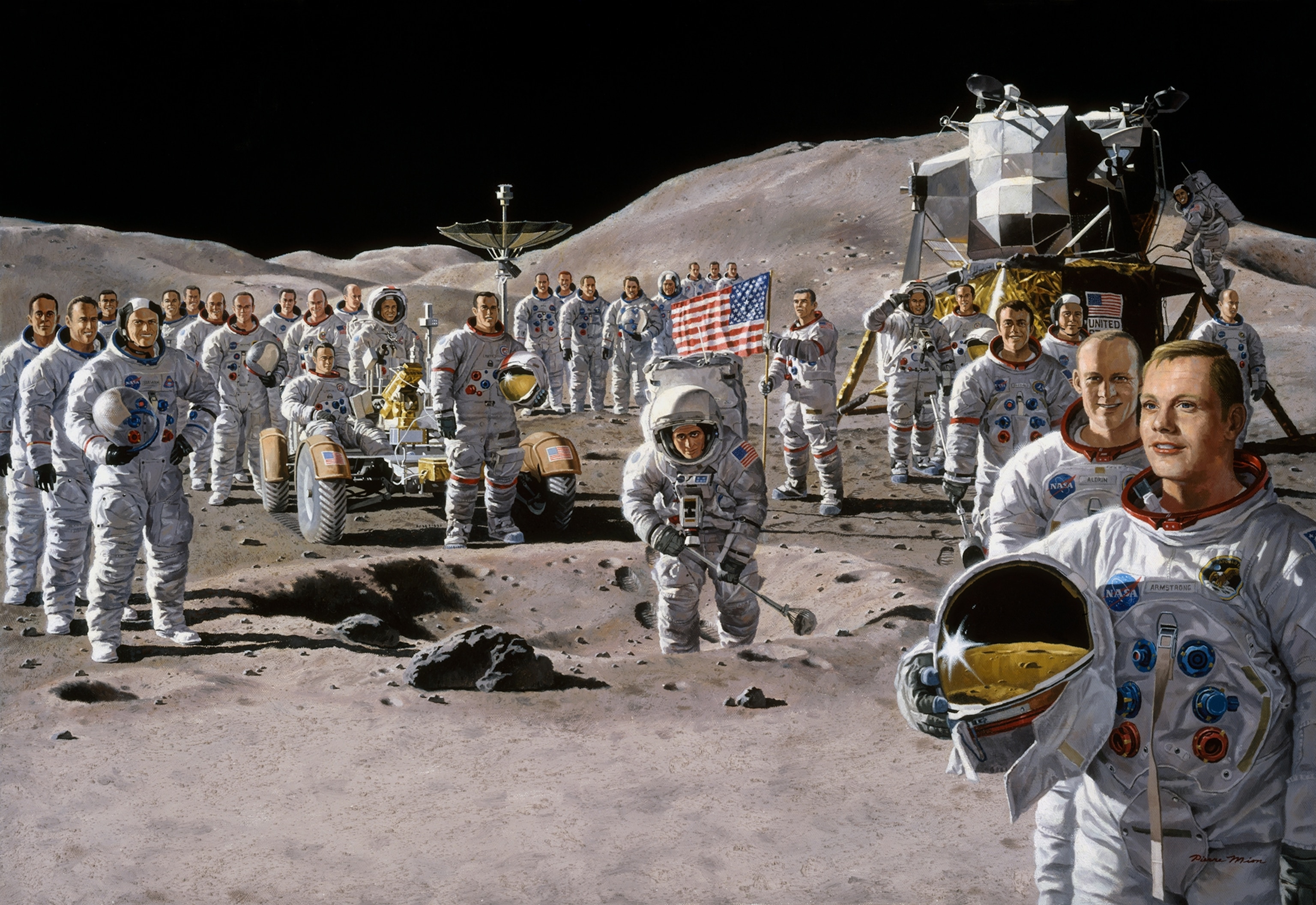 See How Apollo-Era Scientists Thought We'd Live On The Moon

In the 1960s, experts drew on the best science of the time to show how humans might live and work in lunar style.

A shared dream of reaching the moon united the Apollo astronauts in a massive team effort. In this painting, published in 1973, artist Pierre Mion imagines them reunited them at a moonlike training site.
Illustration by Pierre Mion, Nat Geo Image Collection

In 1964, artists Pierre Mion and Davis Meltzer were working in a private room illustrating NASA’s plans for Apollo 11, the mission that ultimately placed the first humans on the moon in 1969.

“We were looking at the actual plans of the spacecraft, and that was classified information.” Mion remembers. “We were literally locked in that room.”

As an Apollo spacecraft slams into Earth's atmosphere, the three astronauts in this cutaway painting, kept safe by the capsule's heat shield, look through viewing ports and see glowing ablation vapors in the wake of their ship.

Their illustrations of several moon missions—and some predictions for next steps in lunar living—ultimately appeared in National Geographic and other magazines throughout the Apollo era, offering eager readers a glimpse at off-world exploration based on the best science available at the time. (Here’s what NASA is planning now to send humans back to the moon.)

“Knowing what the future would look like may have sapped from spaceflight some of its romance,” Matthew Hersch, science historian at Harvard University, says in an email. “But the knowledge that real spaceships would fly to the moon made up for it in public excitement.”

A painting of the lunar module Eagle flying above the moon’s surface, which appeared in the March 1964 issue of National Geographic, includes a lunar landscape that doesn’t look much different from those in the satellite images we see today. In the early 1960s, however, the idea of crater-worn lunar terrain was at the cutting edge of planetary geology.

Some scientists at the time thought that the moon would have harsh, jagged mountains without rain and wind to erode the surface. Others worried that moon dust would be so loose that anything that landed there would sink into it completely.

Mion’s illustration is so accurate because he worked closely with astrogeologist Eugene Shoemaker, whose study of the moon’s craters showed that our natural satellite is covered in just a thin layer of fine dust, called regolith.

“If he worked with Shoemaker, he couldn’t have been working with anybody better at that time,” says Tom Watters, senior scientist with the Center for Earth and Planetary Studies at the Smithsonian’s National Air and Space Museum. “[Shoemaker] did some of the most seminal work in planetary science.”

Watters is currently a co-investigator with the Lunar Reconnaissance Orbiter Camera, or LROC, which orbits the moon and takes high-resolution photographs of the surface. The camera can distinguish objects on the moon as small as three feet wide, including some of the remains of Apollo landing sites and the footprint paths the astronauts left behind.

Watters compared LROC images of the Apollo 11 landing site with a December 1969 painting Mion made of the Lunar Module lifting off, an imagined view based in part on photographs taken by Neil Armstrong and Buzz Aldrin as they walked on the moon.

“That’s a pretty good depiction,” Watters remarked. “That’s not a bad job at all.”

From Engineering to Art

The illustrators also brought this attention to detail and scientific accuracy to their more predictive works.

A close look at Meltzer’s 1969 illustration of a moon colony reveals a cafeteria, a hydroponic farm, and a ping-pong game. According to the original caption, “a small observatory studies the heavens, undimmed by Earth’s atmosphere.” In the distance, a “commuter rocket” is poised to return to Earth. (Also check out Carl Sagan’s 1967 predictions for what life on Mars might look like.)

Most importantly, the base is situated almost entirely underground to protect the inhabitants from radiation, extreme temperatures, and other dangers they would face on the moon’s airless surface. For instance, between 2009 and 2016, LROC spotted over 200 new impact craters on the moon measuring up to 140 feet across.

“This one impressed me not so much in terms of the accuracy of the terrain, but the thinking about how you would build a habitat on the moon,” says Watters. “You would not want to have a habitat on the moon sitting on the surface and get hit by something that could create a ten-meter crater.” (Moon rocks collected during the Apollo missions are also revealing a surprising amount of water deep inside the moon.)

While imaging the lunar surface, the LROC team also identified locations that might work well for moon bases. Watters says a top candidate would be a lava tunnel, a large cavern left behind after an ancient lunar lava flow. By building a base in a lava tunnel, future settlers could avoid the lengthy process of excavating a construction site underground.

When Meltzer’s moon base illustration was published, a lunar colony seemed like a straightforward next step in space exploration. Arthur C. Clarke’s 1968 The Promise of Space was quoted alongside Meltzer’s illustration: “It is strange to think that in a few more years, any amateur astronomer with a good telescope will be able to see the lights of the first expeditions, shining where no stars could ever be, within the arms of the crescent moon.”

But so far, no country has accomplished that feat. After the first U.S. astronauts reached the moon in 1969, Hersch says, “changing priorities, economic difficulties, and the Vietnam War sapped funding for follow-up programs.” The last astronaut to stand on the moon, Eugene Cernan, left the lunar surface in December 1972.

Still, as NASA makes progress with commercial spaceflight partnerships and its next rocket powerful enough to carry humans into deep space, the Space Launch System, these colorful visions are a reminder of humanity’s potential and an inspiration to keep reaching for the stars.