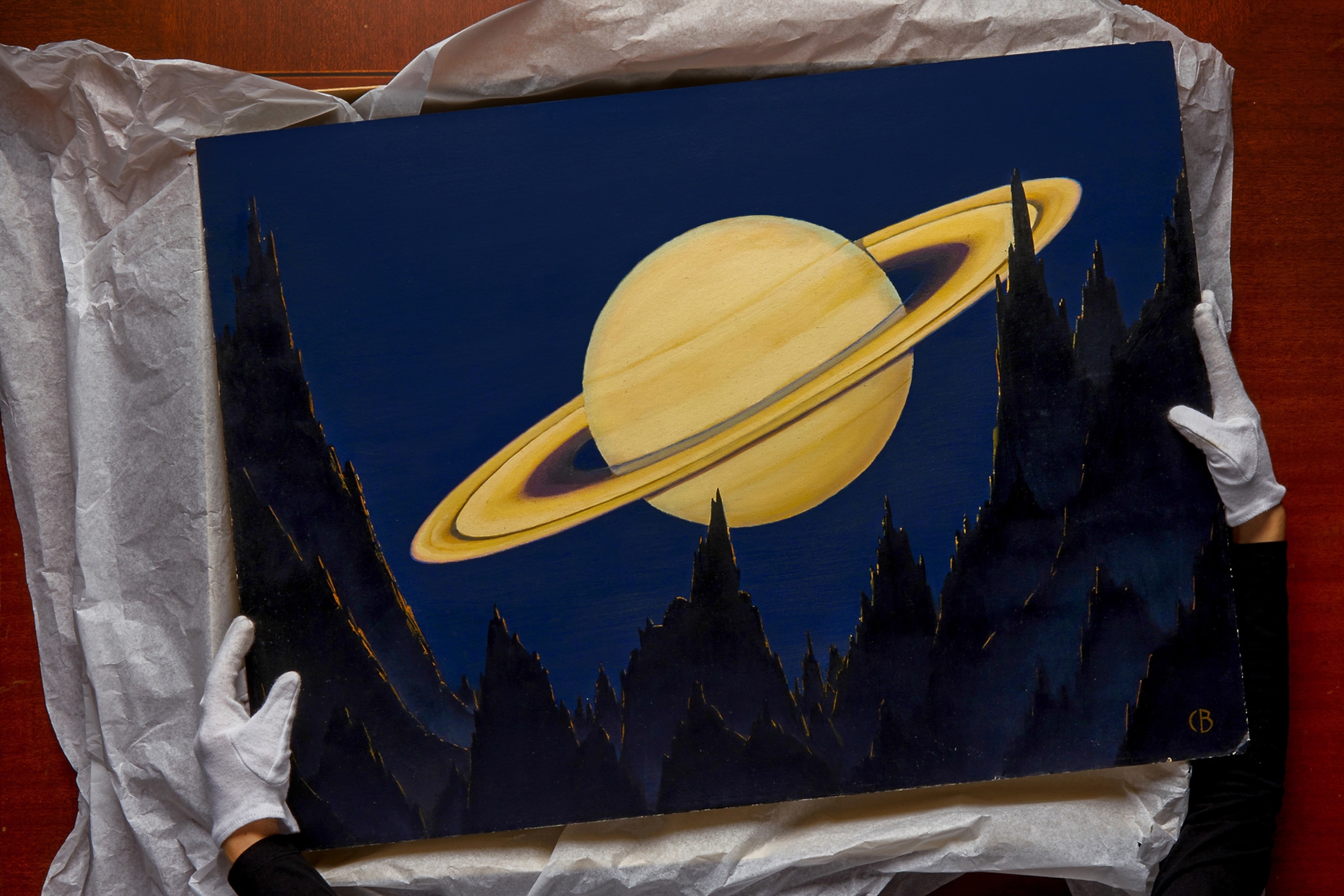 Before we explored outer space, we tried to paint it

Earlier this week, when NASA's New Horizons spacecraft went careening past an ancient chunk of rock more than four billion miles away, science celebrated a milestone—the flyby was the farthest visit to another world humans have made to date. The probe snapped numerous pictures of its target that are now making the long trek back to Earth.

But of course, no humans were actually there to document the spacecraft's big moment. So, what must that distant encounter have looked like up close? It’s the kind of question astronomers have been asking since they began studying the skies, and one that artists—with their brushes, paints, scientific knowledge, and imaginations—have for centuries been trying to help answer.

According to the 1939 caption for this painting, "the only life outside the Earth may exist in Mars' green patches. Many astronomers think they are some form of vegetation, for they appear and disappear with the changing Martian seasons." Decades later, missions to visit Mars revealed that the surface of the red planet is barren, and if life exists there at all, it is likely in the form of underground microbes.

By contrast, this 1939 painting of Earth as seen from the moon is shockingly similar to actual photographs taken decades later by Apollo astronauts. The raised rims on the lunar craters are "very technically correct," a NASA scientist observed.

In July 1939, National Geographic published a story called “News of the Universe,” for which artist Charles Bittinger was commissioned to create a series of paintings that would help readers visualize outer space. At the time, telescopes were advanced enough to reveal details of the moon, but it would be another 30 years before a human would set foot there. Not even a satellite had been launched at the time the piece was published. (Take our quiz to test your knowledge of space.)

Despite the fact that humans hadn’t yet begun to explore outer space, the paintings illuminate how much scientists already understood. In the painting of Earth as seen from the moon, for example, the ridges on the moon’s craters are raised, which planetary scientist Bethany Ehlmann says is “very technically correct.” In another painting, Bittinger depicts the way light scatters into a spectrum of colors. It may seem out of place in the series, but “Bittinger felt it important to illustrate that, to make sure that readers understood the importance of the principle and how it related to the other paintings,” says National Geographic senior graphics editor Jason Treat.

According to a sidebar in the article, Bittinger “combined a fine sense of color values and artistic composition with a painstaking effort to achieve scientific accuracy.”

That resonates with Los Angeles-based science illustrator Dana Berry. Though Berry uses 3-D software and photoshop to depict astronomy rather than the paints and brushes Bittinger used, the intersection of where science meets creativity remains key.

This painting depicts the artist's vision of the asteroid or comet impact that created Arizona's famous Meteor Crater. The constellation of Orion, the hunter, hangs in the upper right.

“I wonder to what extent Bittinger grappled with the three-headed monster that everyone confronts when doing a scientific illustration,” Berry says. “Each image is the resolution of a conflict between pedagogy, believability, and drama.”

At NASA’s Jet Propulsion Lab in California, artist Julia Christensen is working on a project that will involve sending art aboard a spacecraft to Proxima b, an exoplanet 4.2 light-years from Earth. Bittinger’s paintings, she says, reflect the crucial dialog between scientific research and the visual arts.

“Paintings such as these being published in 1939–at the beginning of World War II and just years before the United States would achieve its first crossing of the Kármán line into outer space–surely impacted the vision of scientists who went on to fulfill the goal of space travel.” (What is the Kármán line, and where is the edge of space?)

But what did Bittinger, who died in 1970, have to say about his assignment? “In planning and working out the paintings which accompany this article,” he says in the sidebar, “I came to feel more than ever that astronomy is the greatest monument to human intelligence, which has explored out into unimaginable depths of space with nothing more tangible than the fragile waves of light.”