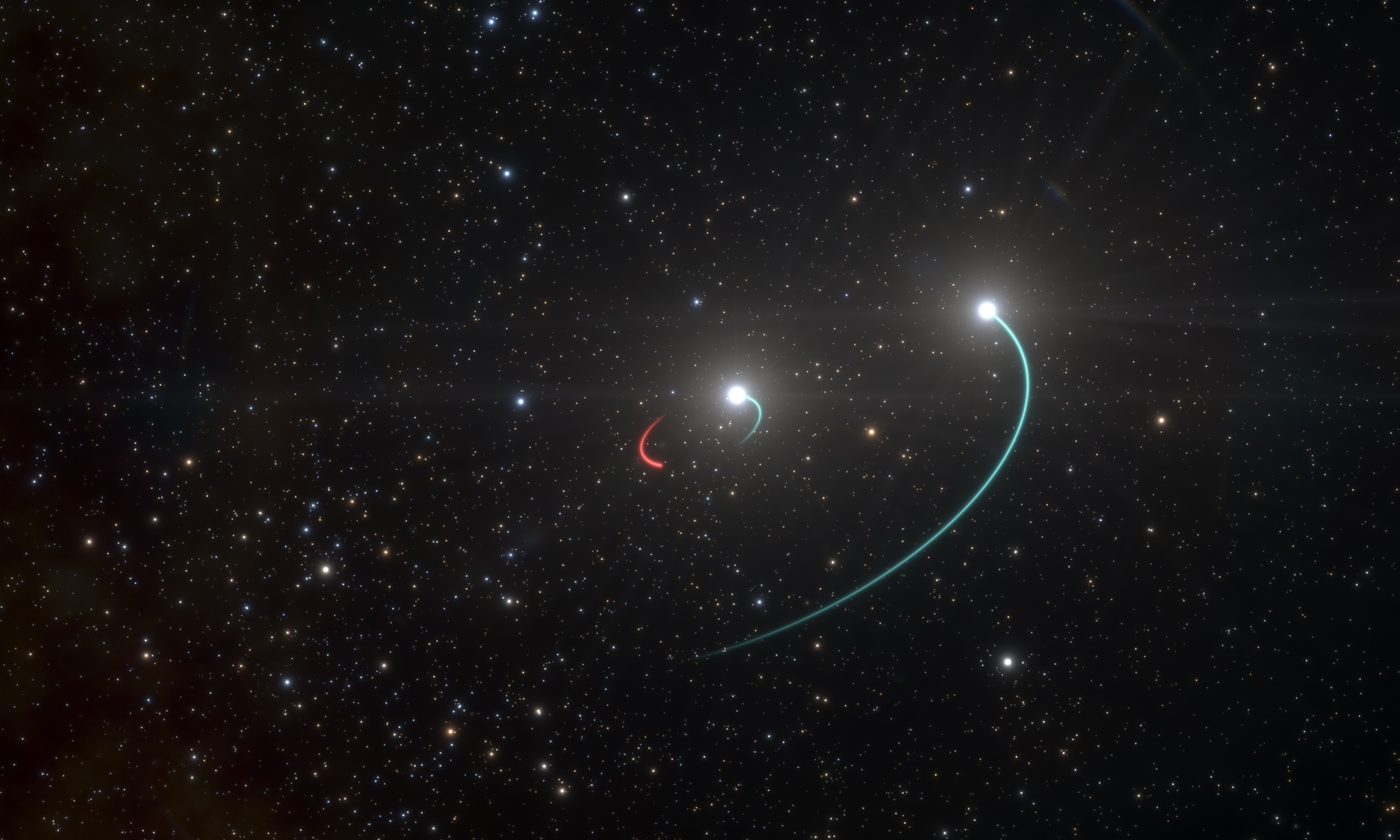 The massive cosmic object lurks in a star system you can see with the naked eye.

This artist’s impression shows the orbits of the objects in the HR 6819 triple system. The system is made up of an inner star (orbit in blue) and a newly discovered black hole (orbit in red), as well as a third star in a wider orbit (also in blue).

During winter in the Southern Hemisphere, a blue point of light in the constellation Telescopium gleams overhead. The brilliant pinprick on the sky, which looks like a bright star, is actually two stars in close orbit—accompanied by the closest known black hole to Earth.

The newly discovered black hole is about 1,011 light-years from our solar system in the star system HR 6819. Unveiled today in Astronomy & Astrophysics, the invisible object is locked in an orbit with two visible stars. It’s estimated to be about four times the mass of the sun and roughly 2,500 light-years closer than the next black hole.

“It seems like it’s been hiding in plain sight,” says astronomer Kareem El-Badry, a Ph.D. student at the University of California, Berkeley, who specializes in binary star systems but wasn’t involved with the study. “It’s a bright enough star [system] that people have been studying it since the 80s, but it seems like it’s had some surprises.”

On a human scale, a thousand light-years is an immense distance. If a model of the Milky Way were scaled so that Earth and the sun were only a hair’s width apart, HR 6819 would be about four miles away. But in the grand scheme of the galaxy, which is more than 100,000 light-years across, HR 6819 is quite close, and it suggests the Milky Way is littered with black holes.

“If you find one that is very close to you, and you assume you’re not special, then they must be out there everywhere,” says lead study author Thomas Rivinius, an astronomer at the European Southern Observatory (ESO) in Chile.

Researchers have long estimated that the Milky Way is home to hundreds of millions of black holes, extremely dense objects whose gravitational fields are so intense, not even light can escape. But finding these dark objects has proven extremely difficult. Dozens of black holes in the galaxy have been spotted “feeding” on nearby clouds of gas—a process that emits x-rays as the material swirls around the edges of the black hole. But the majority of black holes in our galaxy are invisible, so the only way to find them is by observing their gravitational effects on surrounding objects.

The astronomers studying HR 6819 weren’t looking for black holes at all. Instead, they wanted to learn more about a pair of odd stars orbiting each other.

The outer star, known as a Be star, is several times more massive than the sun and burns hotter and bluer. At the equator, the star’s surface whips around at more than 300 miles a second, or more than 200 times faster than the sun’s equator. “They rotate so rapidly that material almost flies off by itself,” Rivinius says.

Back in 2004, a four-month observing campaign of HR 6819 with the MPG/ESO 2.2-meter telescope at the La Silla Observatory in Chile revealed signs that the system wasn’t a standard binary pair of stars. The “normal” inner star appeared to be orbiting another object once every 40.3 days, while the larger Be star orbited at a much farther distance, circling both the inner star and the mysterious third object.

Five years later, Stan Štefl of the European Southern Observatory led a charge to revisit the observations, which contained hints of a black hole lurking within HR 6819. But in 2014 Štefl died in a car accident, which brought the work to a halt.

In November 2019, Rivinius, an expert on Be stars and longtime colleague to Štefl, saw new reason to revisit HR 6819. A separate group published a study that detailed a star system nicknamed LB-1 with a black hole about 70 times more massive than our sun. The work immediately raised eyebrows. Based on what physicists know about how stellar-mass black holes form—left behind after the supernova of an immense star—black holes of that mass shouldn’t be able to form. When a star big enough to yield black holes of that size dies, it explodes in such a way that the resulting debris can’t collapse back in on itself.

Rivinius’s team, however, noticed that the LB-1 data strongly resembled what they had seen years before with HR 6819. They set out to characterize the system’s mysterious third object and, based on calculations of the inner star’s orbit and brightness, the invisible object was found to be at least 4.2 times more massive than our sun—similar to other known black holes in the Milky Way.

If the object is about four solar masses, it can’t be a normal star, since a star that big would be “very easy to detect,” says study coauthor Dietrich Baade, an emeritus scientist at the ESO. It’s also too massive to be a neutron star, which are the dense stellar cores left behind after some supernova explosions.

Only one type of object could explain the measurement: a black hole.

But all studies of systems like HR 6819, with multiple objects in close proximity, contend with a couple potential sources of error, El-Badry says. HR 6819’s outer Be star and inner star are too close together for any one optical telescope to resolve. The two stars can be identified only by the differing spectra of light that they emit.

In some cases, older stars “stripped” of outer hydrogen can mimic the appearance of younger, more massive stars. If HR 6819's inner star is such a mimic, researchers would have to recalculate the presumed black hole's mass.

In follow-up work, researchers led by study co-author Petr Hadrava aim to “disentangle” the light given off by HR 6819 and reveal the precise spectra of the two stars, which should pin down their identities. El-Badry adds that the European Space Agency’s Gaia space telescope, which is mapping the Milky Way with unprecedented precision, may provide more details on the orbits within HR 6819. And because the system is so close, astronomers could pinpoint the two individual stars using a technique called interferometry, which links several telescopes together—similar to how a network of telescopes successfully imaged a supermassive black hole's silhouette.

“Usually when you have a black hole with a star around it, we can’t actually see the star go around the black hole,” says study co-author Marianne Heida, a postdoctoral fellow at the ESO. “This one is so close by, we should be able to to see the motion ... and that means you could get a much better handle on the black hole’s mass, if it all works out.”

As the researchers plan their next moves, though, they are paying tribute to Štefl, the driving force behind finding the black hole in the first place. “Stan was very cautious,” Rivinius says with a grin. “He would probably look at me now and say something like: Are you really sure?”