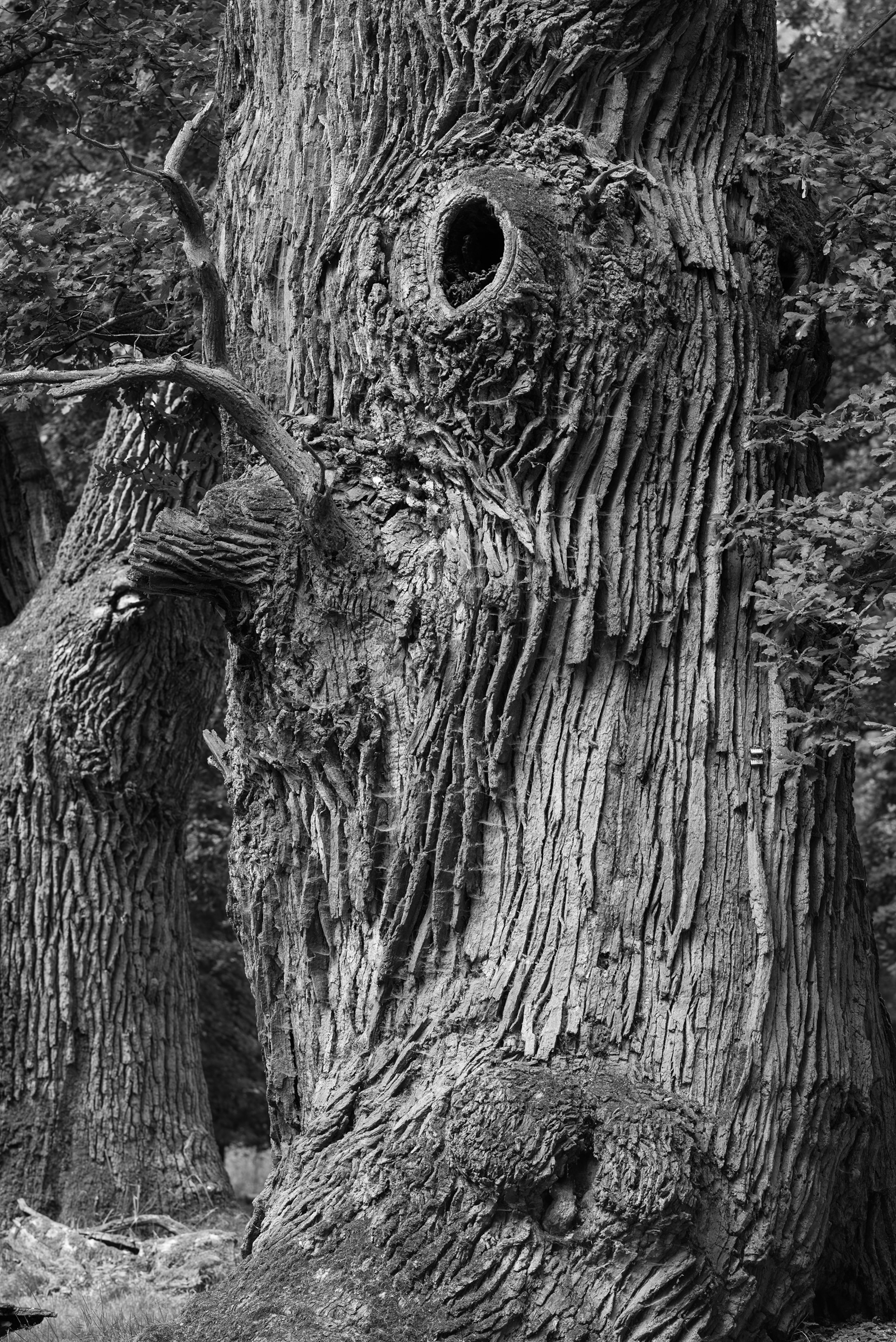 The grand old trees of the world are dying, leaving forests younger and shorter

The effects on wildlife and the ability of forests to store CO2 from fossil fuels could be enormous.

These oak trees in western Germany are approximately 1,000 years old. Old trees like these are dying at much faster rates than young trees, a new study finds.
Photograph by Norbert Rosing, Nat Geo Image Collection

California’s giant sequoias can live for more than 3,000 years, their trunks stretching two car lengths in diameter, their branches reaching nearly 300 feet toward the clouds. But a few years ago, amid a record drought, scientists noticed something odd. A few of these arboreal behemoths inside Sequoia and Kings Canyon National Parks were dying in ways no one had ever documented—from the top down.

When researchers climbed into the canopies, they discovered that cedar bark beetles had bored into a few branches. By 2019, at least 38 of the trees had died—not a large number, but "concerning because we’ve never observed this before,” says Christy Brigham, the park’s chief of resource management.

Beetles have ravaged hundreds of millions of pines across North America. But scientists had assumed that stately sequoias, with their bug-repelling tannins, were immune to such dangerous pests. Worried experts are investigating whether some mix of increased drought and wildfire, both worsened by climate change, have now made even sequoias susceptible to deadly insect invasions.

If so, these ancient sentinels would be just the latest example of a trend experts are documenting around the world: Trees in forests are dying at increasingly high rates—especially the bigger, older trees. According to a study appearing today in the journal Science, the death rate is making forests younger, threatening biodiversity, eliminating important plant and animal habitat, and reducing forests’ ability to store excess carbon dioxide generated by our consumption of fossil fuels.

To paint the most detailed picture of global tree loss to date, nearly two dozen scientists from around the world examined more than 160 previous studies and combined their findings with satellite imagery. Their analysis reveals that from 1900 to 2015, the world lost more than a third of its old-growth forests.

In places where historical data is the most detailed—particularly Canada, the western United States, and Europe—mortality rates have doubled in just the past four decades, and a higher proportion of those deaths are older trees.

There is no single direct cause. Decades of logging and land clearing play a role, scientists say. But increasing temperatures and rising carbon dioxide from the burning of fossil fuels have significantly magnified most other causes of tree death. From Israel’s eucalyptus and cypress plantations to Mongolia’s birch and larch stands, scientists are documenting longer and harsher droughts, more severe outbreaks of insects and disease, and increasingly catastrophic wildfires.

“We will see fewer forests,” says Monica Turner, a forest ecologist at the University of Wisconsin. “There will be areas where there are forests now where there won’t be in the future.”

With 60,000 known tree species on Earth, those shifts are playing out differently across the planet.

In central Europe, for instance, “You don’t have to look for dead trees,” says Henrik Hartmann, with Germany's Max Planck Institute for Biogeochemistry. “They’re everywhere.”

In one recent year, following a week of excessive heat, hundreds of thousands of beech trees dropped their leaves. Bark beetles are also killing spruce, which is not unusual. But hotter weather weakens trees, making them more vulnerable and allowing the insects to multiply and survive through winter into the next year.

Even in colder regions, “You get a couple of hot years and the forests are suffering,” says Hartmann, who was not an author on McDowell’s study. “We’re approaching a situation where the forests cannot acclimate. There are individual species that are being driven beyond the threshold of what they can handle.”

That also may be true in some of North America’s treasured spots. For 10,000 years, fires have roared through Yellowstone National Park every 100 to 300 years. In 1988, such conflagrations caught the world’s attention as they charred and blackened 1.2 million acres.

Turner, the Wisconsin ecologist, has been studying the aftermath of those fires ever since. And the lessons aren’t quite what we once thought they were.

The heat from flames usually helps lodgepole pine cones release their seeds as their sticky resin melts. But in 2016, when those new forests were not yet 30 years old, a new fire raged inside an old burn site from 1988. Because we live in a hotter, drier world, the new fires burned more intensely—in some cases wiping out almost everything. The very process that usually helps create new forests instead helped prevent one from growing. “When I went back, I was just astonished,” Turner says. “There were places with no small trees left. None.”

Just last year, massive fires marched through a dry Australia, smoldered across 7.4 million acres in northern Siberia, and focused the world’s attention on blazes in the Amazon.

In parts of that rainforest, dry seasons now last longer and come more often. Rainfall has dropped by as much as a quarter and often arrives in torrents, bringing massive floods in three out of six seasons between 2009 and 2014. All that activity is altering the rainforest’s mix of trees. Those that grow fast and reach the light quickly, and are more tolerant of dry weather, are outcompeting species that require damp soils.

The consequences of all these changes around the world are still being assessed. The first national look at tree mortality in Israel showed vast stretches disappearing, thanks largely to scorching heat and wildfires. In a country largely blanketed by stone and sand, forests mean a great deal. Trees support nests for eagles and habitat for wolves and jackals. They hold soil with their roots. Without them, plants that normally rise in trees’ shadows are suddenly exposed to higher temperatures and bright light.

“Trees are these big plants that design the ecosystems for all the other plants and animals,” says Tamir Klein at the Weizmann Institute of Science.

Earlier this month Klein met with the Israeli forestry chief to talk about the country’s southern forests, which may not survive the century. “They came to me and asked, What are we supposed to do? We don’t want the desert to move north,” Klein recalls.

“We’re dealing with a very tough situation. It’s a race to the unknown.”

The seeds of the Science study were sown in the early 2000s when lead author McDowell moved to the southwestern U.S. to work at Los Alamos National Laboratory. Outside his office window he saw fields of dead juniper and piñon pine. An intense heat wave had wiped out 30 percent of the pines on more than 4,500 square miles of woodland. “I thought, as a tree physiologist I’m going to have a short stay here because they are all dead,” he remembers.

McDowell and several colleagues began pondering how tree loss would alter forests’ ability to sequester CO2—and how to better predict such devastation in the future. A decade later, a co-worker examined tree rings and past temperature swings and found a relationship between heat and tree deaths. Then he simulated how the forest would change based on temperature projections from the Intergovernmental Panel on Climate Change. The results suggested that by 2050, normal temperatures in the Southwest could be similar to rare past heat waves that led to severe tree-killing droughts. “That was really frightening,” McDowell says.

McDowell and other scientists began to look more broadly. Many people had assumed rising CO2 would feed tree growth. But as the planet gets hotter, the atmosphere sucks moisture from plants and animals. Trees respond by shedding leaves or closing their pores to retain moisture. Both of those reactions curtail CO2 uptake. It’s like “going to an all-you-can-eat buffet with duct tape over their mouths,” McDowell says.

In a tropical forest, the vast majority of tree mass can be in the top one percent of the largest trees. “These big old trees disproportionately hold the above-ground carbon storage,” says study co-author Craig D. Allen, a forest ecologist with the U.S. Geological Survey. “When they die, it creates space for smaller trees, but they have much less carbon in them.”

That’s important, because most global carbon models used by the IPCC assume that forests will do far more to offset our fossil fuel use. The reality may be far less clear.

“When old trees die, they decompose and stop sucking up CO2 and release more of it to the atmosphere,” McDowell says. “It’s like a thermostat gone bad. Warming begets tree loss, then tree loss begets more warming.”

While some significant change to forests is inevitable, Turner says cutting our fossil fuel emissions can still make a huge difference. One scenario she has documented suggests that curbing CO2 in the next few decades could cut future forest loss in Grand Teton National Park by half.

In some cases, though, more radical solutions may be required.

In his meeting, Klein urged Israel’s forest leaders to consider planting acacia trees, normally found in the Sahara, in place of pine and cypress. They manage to keep growing even during the hottest days of the year.

“It is sad,” Klein adds. “It won’t look the same. It won’t be the same. But I think it’s better to do this than just have barren land.”