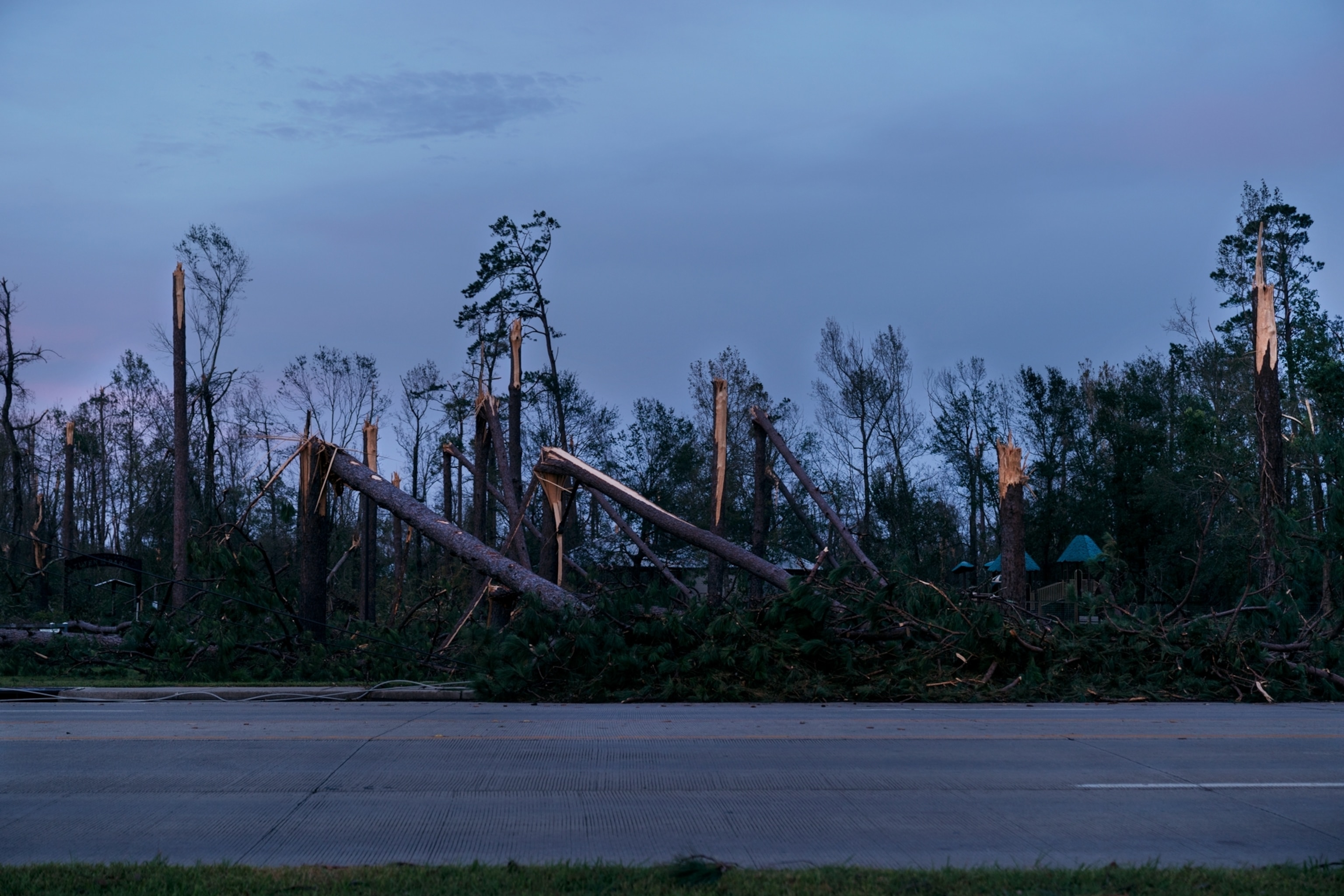 “We didn’t know what devastation was until this storm.” Residents work on recovery after Hurricane Laura, even as they face extreme heat and the coronavirus.

Pine trees litter Nelson Avenue in Lake Charles, Louisiana, snapped in half by Hurricane Laura's deadly winds. The area was spared the huge storm surge forecasters had predicted, but the hurricane brought hours of 150 mph winds that torn apart homes and destroyed trees.

Lake Charles, LouisianaFirst his face went a little numb. Then, he lost feeling in his arms and began to feel nauseated. When the feeling progressed, Casey Brown walked the few blocks to the still-intact home of his father, Lynard, who doused him with water and got him something to eat.

Brown isn’t sure if his symptoms meant he was experiencing heat stroke, or were the result of not having eaten for several days. But the next day he was back to work, repairing the roof of his mother’s house, damaged when Hurricane Laura decimated the Lake Charles area. Next he’ll work on his own home nearby, where he lives with his girlfriend of 11 years, Kasey Mayon, his daughter Lacey, their son Dante, and their week-old daughter, Amelia, who was born the Tuesday before Laura struck.

“The more I do, the faster my family gets back,” he says.

Casey Brown wears the bracelet from when he and his girlfriend Kasey Mayon checked into the hospital for the recent birth of their daughter, Amelia. To celebrate 11 years together, Brown gifted Mayon a bracelet with their new daughter's birth stone.

At a Quality Inn in Baton Rouge, two hours from Lake Charles, Mayon holds her newborn daughter. Despite having given birth via C-section, a procedure for which women usually stay in the hospital for two to four days, Mayon was discharged just a few hours after Amelia's birth so the family could evacuate Lake Charles. Mayon says Amelia has given the family something positive to focus on: "Everybody loves a baby."

A hundred miles away at a Quality Inn in Baton Rouge, Mayon, with her mom and sister, is watching her children while recovering from the c-section that delivered Amelia. She’s hopeful that her home will be repaired soon, but without regular access to her doctor in Lake Charles, Mayon doesn’t know when her health will allow her to safely return home.

An estimated 177,000 people lack running water and 324,000 people are still without power in southwest Louisiana. Whether the region will see a surge in COVID-19 cases remains to be seen. The region was already a hotspot: In July, the city of Lake Charles led the country in the number of new cases per capita.

With high temperatures and humidity that pushes the heat index over 100 degrees, Lake Charles’ residents are facing suffocating heat, a pandemic—and now what they say is the worst storm damage they’ve ever seen.

Hurricane Laura was one of the strongest storms to strike this portion of the Gulf, where Louisiana and Texas begin to blend together, where French immersion schools and cowboy hats are equally common. The hurricane slammed into the coast late Wednesday morning, with150 mph winds that blew for hours.

Though much of the region was spared the deadly surge of ocean water that officials had warned of, the wind caused an estimated $8-$12 billion in damage. (Find out how storm surges can be so dangerous.)

Jack—“like lumberjack”—Terrell is a professional tree-cutter who follows storms around the country for the company Down and Out. When a storm hits, the crew moves in, offering their services to remove fallen trees.

“You get all excited, pumped up to make money,” says Terrell of anticipating the next job. “But you get here and think, holy shit this is bad.”

In terms of physical destruction, Terrell and his teammates say Laura is the worst hurricane they’ve ever seen. In the Gulf Coast region, where hurricanes are part of life, residents use past storms like units of measurement. To say a storm was worse than 2005’s Hurricane Rita is to say it was very bad.

“I think it’s a lot worse than Rita,” says Hurricane Thomas, who was born in 1957 in the middle of Hurricane Audrey. Born at home in Indian Creek, Louisiana and taken to the hospital the next day, Thomas says his mother figured she “might as well” name him Hurricane.

"If you want to know about hurricanes, talk to Hurricane Thomas down the road," says farmer Valeria Bourgeois. Hurricane was born at home in 1957 in Indian Village, Louisiana as Hurricane Audrey swept through the state. His roof has been blown off his house three times, by Laura, Rita, and he thinks Hugo, though he can't quite remember.

Inside Hurricane and Deborah Thomas's home, sunlight, no longer blocked by the roof, puts a spotlight on the rubble left by the storm. A family photograph sits atop a pile of insulation.

His current home in Iowa (pronounced eye-way), Louisiana, 15 minutes east of Lake Charles, is destroyed. Laura tore the roof off and tossed into a nearby pasture, and the inside is filled with rubble and insulation. Thomas, his wife, and his two children are sleeping in what was once the kids’ playhouse—renamed the kid motel.

This is the third hurricane to destroy the roof, Thomas says. Instead of replacing it, he plans to bulldoze his home and start over.

On the first Sunday after the storm hit, Pastor Frederick Lafleur stands in the parking lot at The Church at Lake Charles, delivering a sermon to five members of his congregation. His son, Daniel, is taking a video on his phone so that other congregants who fled the storm can watch on Facebook, a practice they started when COVID-19 broke out last March.

Inside the church, which sustained only moderate damage, every other pew is still marked off with tape to encourage social distancing.

Lafleur says he knows of a lot of people in the church’s neighborhood who caught the virus, and he fears the hurricane will distract people from taking precautions like wearing masks and standing six feet apart.

At Charlie and Valerie Bourgeois's cattle farm in Iowa, Louisiana, nearly 100 oranges were knocked from the tree. Two barns were destroyed, but all of the more than 600 cattle they keep survived.

On the first Sunday after the hurricane, Pastor Frederick Lafleur holds an outdoor service in the parking lot of The Church at Lake Charles. Lafleur has been preaching at the church since 1997 and says it was important to hold a service in the destroyed city so he could "offer a word of hope."

James Johnson is exhausted, having been awake for nearly two days straight, working a security job. Many in the area fear looters, and are hearing rumors of essential items being stolen.

On Nelson Road in Lake Charles, a steel barrier sits crumpled up like paper in the grass. Lake Charles was spared the deadly floods that often accompany hurricanes, but the winds created a life-threatening hazard where even the smallest debris could be deadly.

Few people tending to their homes in Lake Charles seem to be wearing masks when speaking to other people, but it’s safe to say the hurricane has forced distance between neighbors: At least 6,000 Hurricane Laura evacuees are sheltering in New Orleans.

One of the major concerns leading up to Laura’s landfall was that evacuations would lead to thousands of new COVID-19 cases. A paper published last month analyzed the movement of Floridians fleeing Hurricane Irma in 2017 and found that the same movements today could spur as many as 61,000 new coronavirus cases.

On Tuesday the Louisiana Department of Health reported 667 new COVID-19 cases, bringing the state’s total to 148,882 since the pandemic began. Last Monday before evacuations started in earnest, the state reported 622 new cases. No outbreaks at evacuation sites have been reported–so far. To direct resources toward disaster response, many testing sites were closed. (This is how officials prepared to combat both a hurricane and a pandemic.)

There are three months left in what forecasters predicted would be an especially active hurricane season this year. Tropical Storm Nana will soon hit Central America just south of the Yucatan Peninsula, and meteorologists are monitoring two tropical disturbances in the Atlantic.

At the Johnson Bayou Fire Department, on the Gulf in Cameron Parish, Chief Rony Doucett is standing in a warehouse piled high with cases of bottled water, bug spray, MREs and sports drinks. The items the community of about 300 still needs so people can eat and clean up without running water: paper towels, disposable plates, silverware. They also need “some prayers for that next storm to miss us,” Doucett adds.

Laura ripped the roof off his home, and he says the possibility of another major hurricane making landfall in the area is something he can’t even think about right now.

In Lake Charles, Casey Brown says he knows people who spent all their savings evacuating the storm, and he’s not sure what they’ll do now. Both he and Kasey’s mom applied for FEMA assistance and were denied. Neither are sure why.

“I don’t know if this area could survive [another] mild hurricane. I think everyone would give up,” he says. “Rita was devastating, but we didn’t know what devastation was until this storm.” When the next one comes, “we’re praying for a Rita.”

For some, the toll of living with hurricanes is too much. Casey says his cousin, whose house was destroyed, may relocate to Dallas. But Casey figures there’s bad weather everywhere— tornadoes in the Midwest and fires in California, and if he’s going to be in the path of natural disasters, he’d rather do it with family nearby.

“Lake Charles was pretty,” he says, gesturing toward the fallen trees and power lines obstructing the road. “The people are great, the food is great, the water at the beach is not great—it’s dirty—but the community, the culture, that’s great.”

As he works, he still wears the hospital bracelet from when Amelia was born. He plans to head to Baton Rouge to see her soon, and then he’ll be back to work.