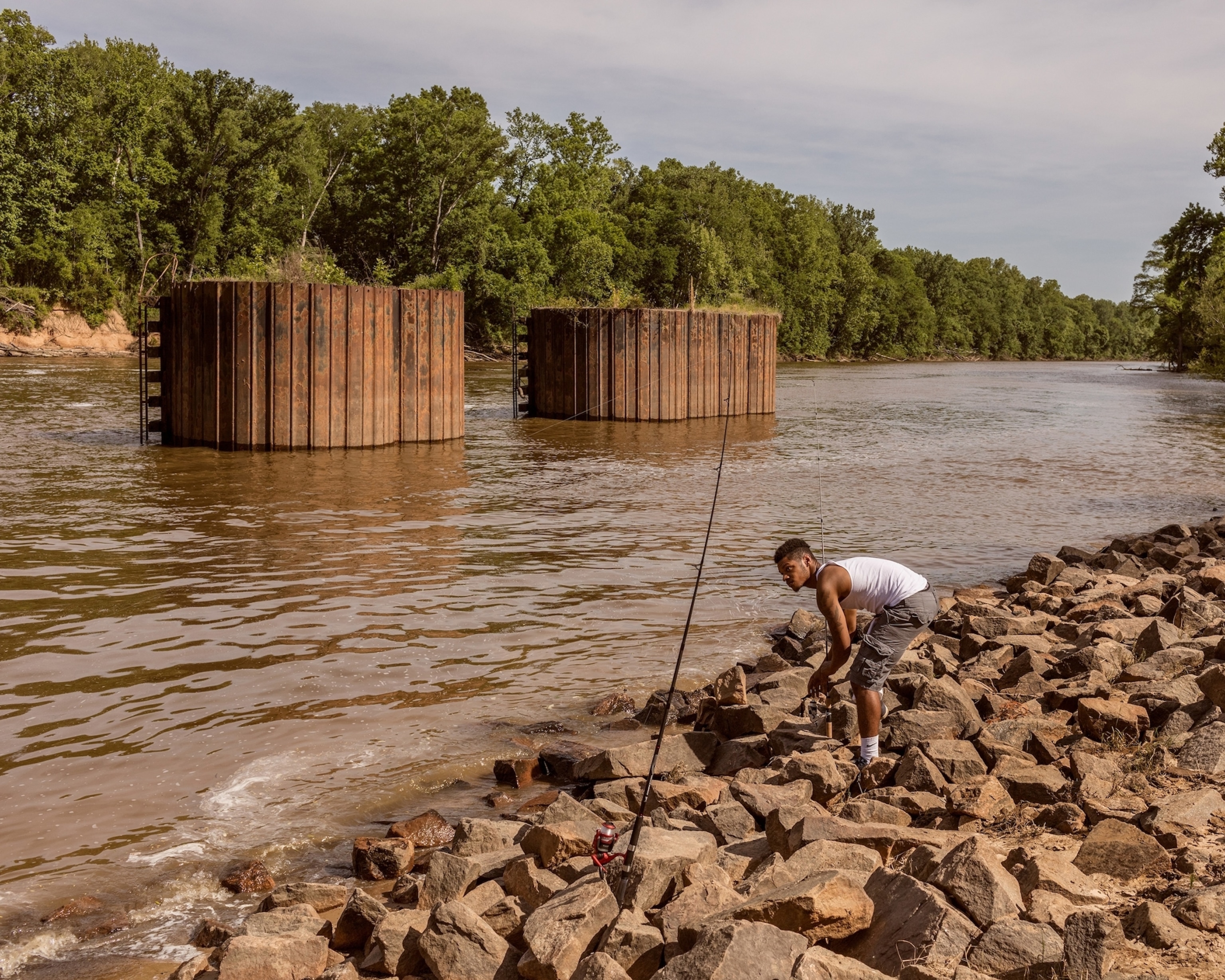 The health effects of PFAS chemicals are still under scientific investigation, but North Carolina residents worry that the abundant substances puts them in danger too.

In May 2018 in Fayetteville, North Carolina, D'Anthony Brown sets up fishing poles at the William O Huske Dam. This is the dam closest to the Chemours plant, which manufactures products containing PFAS chemicals. Chemours has been accused of polluting the water supplies of cities downriver.
Photograph by Jeremy M. Lange

Fish a striped bass out of North Carolina’s Cape Fear River, and it’s likely you’ve just hoisted up a swimming vessel for PFAS, a family of long-lasting chemicals found in many consumer products and fire-fighting foams.

Of the fish tested for the chemical in a study recently published in the journal Environment International, all had elevated levels of PFAS. Compared to previous studies in 2015 and 2001, the North Carolina stripers have the highest rates of PFAS documented in North American fish.

A number of environmental issues have made restoring the Cape Fear River’s striped bass population a challenge. Though the river is regularly refilled with fish hatched offsite, scientists are beginning to suspect that PFAS is impeding sustainable reproduction, impacting the quality of the fish’s eggs.

Statewide, North Carolina has some of the most PFAS-contaminated water in the country, thanks to its abundant chemical manufacturing facilities and military bases. Tap water samples regularly show that many of the state’s residents are drinking water that exceeds the EPA’s recommended limit for PFAS.

Once the drinking water problem was identified, “people kept asking: What about fish?” says Scott Belcher, an environmental toxicologist at North Carolina State University and a corresponding author on the study of PFAS in striped bass.

Because PFAS is so ubiquitous in striped bass and found in river sediment, Belcher and his colleagues suspect that other aquatic organism also have the chemicals in their bodies.

Studying the effects of PFAS, however, presents a unique scientific challenge. These chemicals build up slowly in the body, disrupting essential functions gradually over time. That slow build means it’s hard to know for sure if PFAS is causing health issues rather than one of the many other pollutants the region’s humans and animals regularly interact with.

PFAS, short for per- and polyfluoroalkyl substances, is the label for a type of several thousand chemicals. They are famously resistant to heat, water, and oil, which makes them ubiquitous in consumer products like fire-resistant carpets, rain-proof jackets, and non-stick pans. PFAS are also used in firefighting foams and subsequently turn up in large quantities near military bases and airports.

However, the chemicals present a health hazard if ingested because they can act as what scientists call an endocrine disruptor, a chemical that can wreak havoc on the body’s natural hormone function.

“PFAS chemicals look a lot like a fatty acid, something we get from our food,” says Susanne Brander, an eco-toxicologist at Oregon State University who specializes in the effect of toxins on fish. “The fish ingest this chemical, and the receptors in cells identify it as a fatty acid. Instead, you’re getting an imposter molecule. The message gets jumbled.”

The carbon fluorine bonds in PFAS are some of the strongest in nature, which prevents these chemicals from easily breaking down. However, that means PFAS chemicals could last longer in river sediments and more easily build up in the body when ingested.

PFAS has been manufactured in North Carolina since the 1950s, first by DuPont and then Chemours. In 2016, a study published in the journal Environmental Science and Technology showed that PFAS discharged by Chemours into the Cape Fear River was making its way into drinking water.

Lee Ferguson, an environmental engineer from Duke University, says it’s plausible PFAS is behind the problem with the bass population in the area.

“Given the [PFAS] concentrations in the river, there’s every indication they could cause problems for the entire aquatic ecosystem,” he says.

Striped bass populations in the Cape Fear River have been dwindling for 50 years. Throughout the 20th century, the river experienced a trifecta of dam construction, overfishing, and an influx of pollution that made it more difficult for the population to survive.

Preventing the popular sport fish from disappearing altogether has required meticulous human intervention. Passageways have been built into dams and locks to allow the migratory fish to pass through, and a moratorium on fishing the species has been in place since 2008.

Since 1998, the North Carolina Wildlife Resources Commission also has been working to restore striped bass by supplementing wild populations with fish grown in hatcheries, human-made facilities where fish are hatched and raised until they’re large enough to be transported to rivers.

The population, however, isn’t reproducing successfully enough to sustain itself. A survey done in 2014 found that, despite years of intervention and hundreds of thousands of off-site bass dumped into the Cape Fear River, a region capable of supporting more than 100,000 bass had just over 15,000.

From April to August 2018, Belcher and his research team caught and collected blood samples from 58 striped bass in the river. In all of them, the team found 11 different PFAS chemicals at high levels. Compared to striped bass raised in an aquaculture facility, the wild bass had 40 times the amount of PFAS in their blood.

Two previous studies indicate those chemicals disrupt liver and immune function in fish. And one of them, known as PFOS, is a version of these chemicals that was phased out of U.S. manufacturing in the early 2000s yet still persists in the river.

PFAS chemicals are loosely divided into two categories: short chain and long chain, depending on the number of carbon atoms in their molecular structure. Shorter-chain PFAS chemicals generally don’t last as long, so in 2006, the Environmental Protection Agency encouraged eight of the U.S.’s leading PFAS manufacturers to phase out two long-chain PFAS chemicals: PFOA and PFOS, in favor of their shorter-chain cousins.

To replace PFOA, Chemours and then Dupont began manufacturing a shorter-chain PFAS under the brand name GenX. All of Belcher’s blood samples taken from the river’s striped bass contained PFOS, and just under half tested positive for GenX.

“Our inclination is that it is a significant part of the impact [on reproduction],” says Belcher of the PFAS chemicals.

Piecing together the PFAS puzzle

The Cape Fear River is polluted by more than PFAS, including agricultural runoff and coal ash. Ferguson describes figuring out which chemical is causing the problems as an environmental Whack-a-Mole: “We identify one problem, and three more pop up.”

“The physical environment has been looked at quite heavily and nothing has jumped out,” Belcher says of studies on dams and locks that impede the fish’s movements. “There are multiple factors stressing the systems, and the chemical pollution is one of them.”

Brander, who also researches the effect of pesticides and microplastic, also considers PFAS to be among the most troubling chemicals lurking in aquatic systems.

“I think it’s one of the bigger concerns right now, particularly given the concentrations they’re being found in,” she says. “It explains why they’re still seeing such high levels [of PFOS and PFOA] even though production was ceased back in the early 2000s.”

One of the challenges of studying the health effect of PFAS is its delayed effect. Rather than targeting the body acutely, PFAS builds up over time, and any of the chemicals ingested in an organism’s juvenile years may not show up until adulthood, Brander says.

The moratorium on striped bass suggests it’s unlikely many people along the river are consuming the species. But Belcher notes in his study that more commonly eaten species such as the bottom-dwelling catfish may present a health risk.

So far, no PFAS consumption advisory is in place in North Carolina, and many of the potential impacts on people are still unknown.

“In clinical medicine, we can say if your cholesterol is over 200, that’s bad and we know what that means,” says Jane Hoppin, the lead investigator for the GenX Exposure Study, a project to understand the effects of GenX in people. With PFAS, drawing a link between the amount measured in your blood and the direct health impact isn’t yet possible.

Instead, PFAS chemicals, “interfere with a lot of normal, everyday functions like increasing risk of cholesterol, high thyroid, altering immune response—these subtle things that could overall have major impacts,” she says.

Similarly, the subtle nature of the chemical makes it difficult to pinpoint health effects in fish, Belcher says. When the environment faces a long roster of air and water pollutants, how do we know for sure one chemical is at fault more than the others?

Despite the current coronavirus outbreak closing labs around the country, Belcher says he and his research team plan to continue studying PFAS this spring. Recently, they collected blood samples from Cape Fear alligators that are yet to be analyzed, and in April, they’ll begin looking at the impact of PFAS on fish embryos.