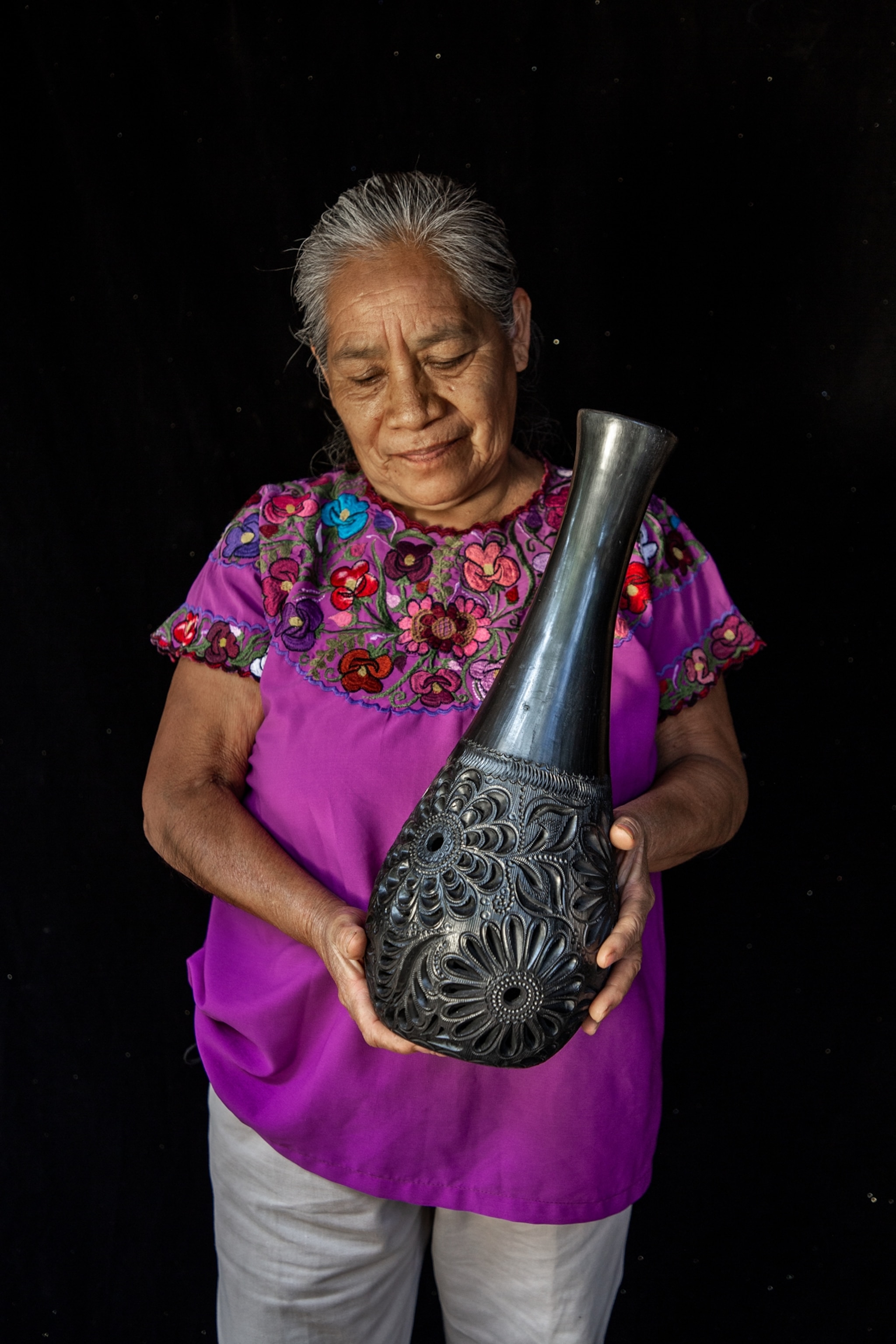 In Oaxaca, traditional black pottery is making a comeback as a sustainable alternative to throwaway plastics.

In the Oaxacan village of San Bartolo Coyotepec, Silvia García Mateos is one of the members of Colectivo 1050°, an artisan cooperative steering the 2,500-year-old tradition of black pottery back to its sustainable roots.
Photograph by Mariceu Erthal García, National Geographic

In the Oaxacan village of San Bartolo Coyotepec, legend contends the clay is blessed. Artisans who use it to make Oaxaca’s famous barro negro, black clay pottery, are reluctant to reveal its secrets.

But 66-year-old Amando Pedro Martínez is an exception. Sparks crackle from the earth oven in his studio as I watch him reach, with cloth-covered hands, into the still cooling kiln and pull out smooth ebony plates one by one.

Made from clay mined on the slopes of the Sierra Madre across the valley, these pieces started out the color of wet mud. Impregnated with heat and smoke, they transformed into sleek greys and blacks evocative of twilight’s darkest hour. It’s no wonder ancient Zapotec folktales call barro negro “pottery of the night.”

Pedro is upholding an artisanal tradition that dates back more than 2,500 years—making San Bartolo Coyotepec, about five miles from Oaxaca City, one of Mexico’s oldest and most distinctive pottery communities.

Just beyond his studio, the town’s tidy, wide avenues are lined with home workshops where extended families work side by side turning clay into pots and figurines. They also create the skulls and candelabras that are especially popular leading up to Day of the Dead festivities. Travelers arrive in tour buses to buy the iconic black pottery—but what tourists see isn’t exactly traditional.

(Here’s how paper crafts bring the party on Day of the Dead.)

When tin, aluminum, and plastics began to replace watertight black clay vessels, artisans adapted to a changing market by introducing new shapes, offering decorative pieces, and incorporating different techniques, such as etched patterns and plastic molds. While these changes helped black pottery survive, and some might say prosper, it has also compromised the community’s historic relationship to clay.

However, a new generation of artisans, including the cooperative Colectivo 1050°, of which Pedro is a member, is steering black pottery back to its utilitarian roots. In the process, they’re bringing attention to the ancient craft’s sophisticated design and inherent sustainability.

From functional to figurative

“Barro negro is the megafauna of Oaxacan pottery,” says Eric Mindling, documentary photographer and author of Fire and Clay: The Art of Oaxacan Pottery. “It’s the most recognizable, but its rise is dependent on a rich pottery ecosystem.” Mindling has visited more than 70 villages across Oaxaca and encountered at least as many variations of pottery style.

Zoom out to see more of Mexico.

Beyond these valleys, the Sierra Madre mountains rise and fall north to Puebla, south to Chiapas, and west to the Pacific coast. This heaving landscape, with its sinuous valleys, mountain passes, and trading routes, harbors at least 16 distinct ethnic groups that still practice a farming system known as milpa, wherein corn, beans, and squash are cultivated together.

Oaxaca’s pottery evolved to perform distinct tasks related to milpa, such as cooking, storing, and irrigation. “The majority of Oaxacan pottery was made to absorb the thermal shock of cooking on top of a hot flame,” Mindling says.

San Bartolo Coyotepec pottery was different. Fired in sealed underground ovens at high temperatures, barro negro’s color and impervious clay body is a result of intense carbonization. It’s suited to holding and transporting liquids—but not for cooking, as traditional red pottery is.

San Bartolo Coyotepec’s clay economy and identity went on uninterrupted well into the 20th century. Then a woman named Doña Rosa Real Mateo de Nieto arrived on the scene and changed the course of black pottery.

“Shiny pieces happen when the pottery is under-fired,” Pedro explains. “We thought they were defective, but Doña Rosa saw them as an opportunity.” By the late 1960s, the use of tin and plastics was established in villages surrounding Oaxaca City.

Around the same time, a growing Arts and Crafts movement in the United States and Europe unleashed an appetite for collectible folk art, and foreigners began visiting Oaxaca. In San Bartolo Coyotepec, these visitors gravitated toward lustrous jet-black pottery in Doña Rosa’s workshop.

Doña Rosa seized the momentum and began carving patterns on pots and figures, burnishing them with quartz, and firing them at lower temperatures to get the new look. The pieces sold quickly and profitably, and the rest of the town followed her example.

Farmers became potters, Pedro tells me, and the shift from functional matte vessels to glossy decorative items was underway. To keep up with demand, potters began using molds in lieu of hand-forming, a trend that is fully established today.

A tree-lined plaza next to the town’s 16th-century Mexican baroque church doubles as a barro negro bazaar, where tour buses and day-trippers disembark to haggle over ebony candelabras, crucifixes, planter pots, and a mind-boggling menagerie of birds, rabbits, horses, and miniature skulls decorated with beautiful openwork designs. Business is brisk, but so is competition.

“In a way, life became easier because we aren’t working in the hot sun anymore,” Pedro says. “But the desire to accumulate transformed the village. Now, it’s everyone against everyone else.”

(These artisan towns unlock the mystery of Japan’s perfect paper.)

The shift back to craft roots

“Take the well jug, for instance,” Barrera says. “It’s got a short neck for tying the rope to lower it into a well. The round, egg-shaped body is ergonomically designed to tilt when it hits water. The mouth is shaped to scoop up water and keep it in without spilling. This is a good design, perfectly suited to the task with no excess waste. And it’s a design that no doubt was worked out by the whole community, over time.”

In Mexico where systemic obstacles persist, “there is nothing more challenging than being an Indigenous woman,” says Barrera. Clay is an integral part of Indigenous identity; for many, it’s the only source of income.

Giving value to Indigenous pottery makers’ ancient system of producing and consuming in balance with the earth—what Barrera and Mier y Terán call the “artisan mindset”—is their core work.

“I don’t know when I lost the desire to make figurines,” says Pedro, who learned pottery from his parents. Attuned to the craft’s inherent sustainability, he sees it as an antidote to plastic and pollution. Joining Colectivo 1050° allowed for a fresh start. With Barrera’s help, he began making plates inspired by apastles, shallow bowls used for mixing.

(This artist reveals the growing amount of plastic waste littering the ocean.)

Two blocks from his workshop is the studio of Silvia García Mateos, another Colectivo 1050° member. García and Barrera created the Bartolo Jug, a contemporary piece inspired by the iconic well jug. With its elegant short neck and gently fluted mouth, the Bartolo Jug functions both as a vase and a water pitcher. Presented at the 2012 “Destination: Mexico” exhibition at New York’s Museum of Modern Art, it became an instant bestseller.

High-profile collaborations, such as with Danish chef Rene Redzepi, have helped reintroduce a new generation, in Mexico and abroad, to the utility, sustainability, and beauty of black clay pottery—and, indeed, all Oaxacan pottery.

But there’s still work to be done. As Oaxaca’s tourism expands, so too does the use of plastic. There is a widespread perception of traditional pottery as unrefined and cheap. Without sustainable village-based income, pottery communities grapple with migration and the loss of cultural identity. Colectivo 1050° and its mission to elevate the “artisan mindset” offer an alternative. “So, we will continue to make and use clay,” says Barrera. “We must.”

Rachna Sachasinh writes about travel and culture and has worked with artisan groups, including in Oaxaca. She is based in Chiang Mai, Thailand. Follow her on Instagram.

Mariceu Erthal García is a Mexican photographer exploring the bridge between daily life and history through documentary and fine art photography. To see more of her work, follow her on Instagram.