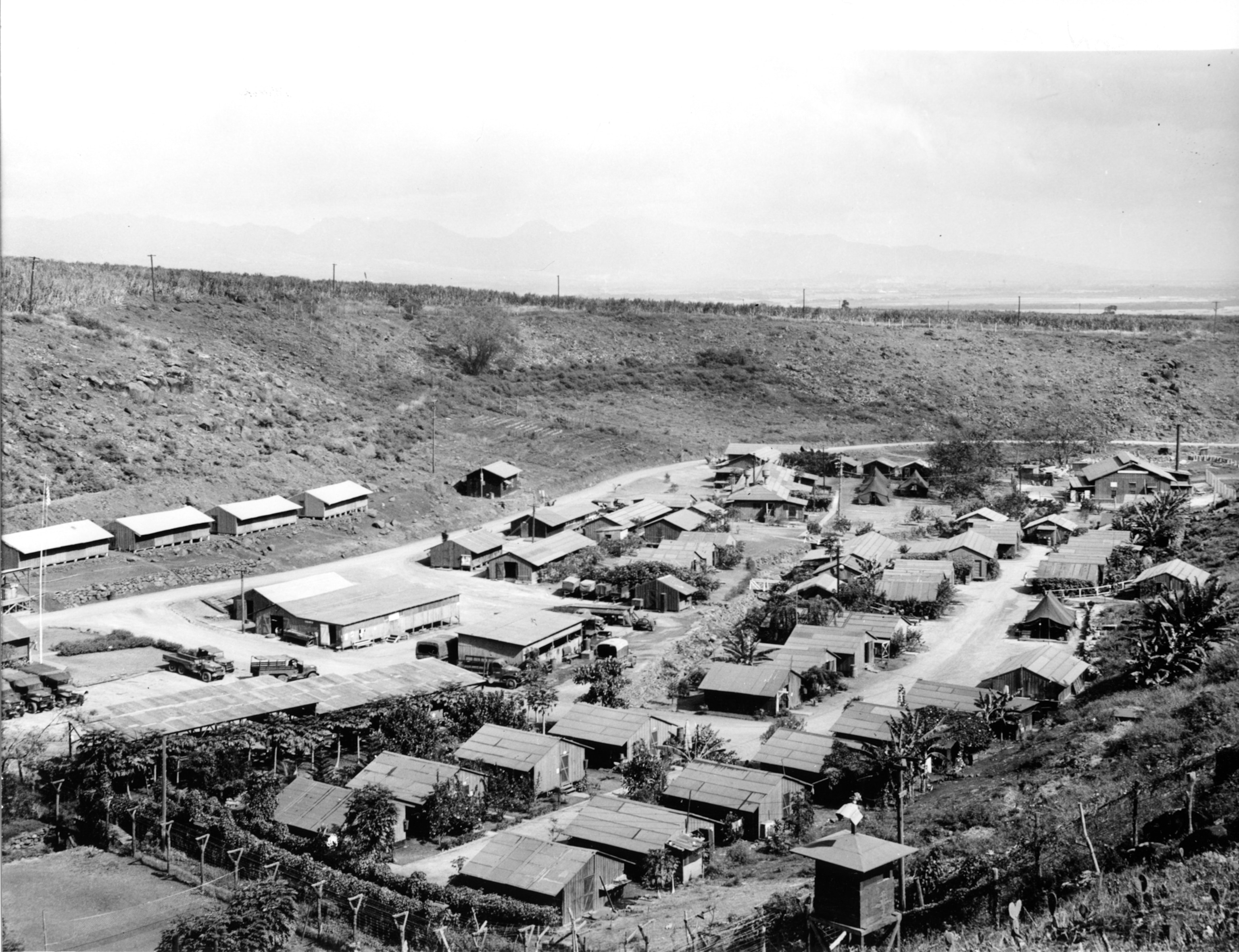 The Honouliuli Internment and POW Camp on the Hawaiian island of Oahu is pictured during World War II. Japanese Americans were wrongly imprisoned here during the early 1940s, and it’s one of multiple nearly forgotten sites around the islands related to this shameful, racist era in United States history.
Photograph by R. H. Lodge. Courtesy of Japanese Cultural Center of Hawai‘i (JCCH)

Framed by overgrown Guinea grass and skinny koa haole trees, the patch of 123 acres on western Oahu island could be any other stretch of undeveloped land in Hawaii. But a closer look reveals concrete foundations, a crumbling rock wall, and the remnants of a metal fence. These are the only signs that indicate this was once the site of Honouliuli Internment and POW Camp, the largest incarceration center on these islands during World War II.

This hot, muggy part of “Hell Valley” on former sugarcane and pineapple farmland once held 4,000 prisoners of war and 400 innocent civilian internees, most of them Japanese Americans, in prefabricated barracks and tents. After the camp’s last occupants were released in 1946, nature, negligence, and a willful disregard for a dark era in United States history buried it for decades.

Efforts to tell the world about Honouliuli are still in progress. President Barack Obama proclaimed it a National Monument in 2015 and it was redesignated Honouliuli National Historic Site in 2019—the first steps toward opening it to the public. Archaeologists and researchers are currently investigating the site.

It will be many years before the site opens to tourists, as 10 other U.S. internment camps have. But there are other haunting echoes throughout the islands of this troubling period of anti-Asian discrimination, internment, and military rule.

Located less than 13 miles from Honouliuli, Pearl Harbor National Memorial is Hawaii’s most-visited attraction, drawing an estimated 1.8 million tourists annually. A commemoration this December will mark the 80th anniversary of the surprise Japanese attack on U.S. military forces in Pearl Harbor on December 7, 1941, and honor the more than 2,335 service members and 68 civilians who were killed.

After that “day of infamy”—the catalyst that thrust the U.S. into World War II a few days later—American officials deemed Japanese Americans “enemy aliens.” On the mainland, more than 120,000 of them were put in incarceration camps over the next weeks and months. On the Hawaiian islands, more than 2,500 Japanese Americans were rounded up (as well as 100 Germans and Italians). Detainees were imprisoned at Honouliuli or one of 16 other camps in California, Arizona, Wyoming, Colorado, Utah, and Arkansas.

The effort to tell the story of the camp and its residents began in 1998, when a local TV news reporter contacted the Japanese Cultural Center of Hawaii, asking about the location of Honouliuli. Volunteers were stumped. “We had no documentation, so we started to ask people in the community,” says Jane Kurahara, a staff associate at JCCH. “Most didn’t know there was an internment camp in Hawaii.”

Over the next few years, the JCCH made calls trying to locate the exact location of Honouliuli and began collecting and archiving related letters, photographs, drawings, paintings, and oral recordings. In 2002, JCCH volunteers found the camp site after stumbling on a concrete aqueduct and a metal pipe that matched an old U.S. Army photo. Artifacts and history related to the camp can now be viewed at JCCH’s Honouliuli Education Center in Honolulu.

“It isn’t a flattering part of history,” says Hanako Wakatsuki, superintendent of the Honouliuli National Historic Site. “People would rather talk about valor, heroism, and honoring.”

The JCCH and Honouliuli Internment Camp trace their roots to the Japanese immigrants who arrived in the Kingdom of Hawaii in the 1880s to work the sugarcane fields. They were brought in after the Hawaiian government, worried about growing Chinese dominance, restricted immigration from China. By the time Hawaii became a U.S. Territory in 1900, Japanese immigrants made up nearly 40 percent of the population, including women and children. These families formed a tight-knit community, opening Japanese language schools, temples, and teahouses.

But resentment and jealousy grew among other U.S. citizens as Japanese laborers moved from farming into more skilled work as mechanics and merchants. In 1924, the U.S. Congress passed the “Asian Exclusion Act,” halting Japanese immigration to the U.S. and its territories. This put Japanese and Chinese immigrants, who were not eligible for citizenship, in a Catch-22 that would be used to question their loyalty during WWII.

When President Franklin D. Roosevelt became the first sitting U.S. president to visit Hawaii in 1934, he praised the islands’ diversity. But privately, he worried about potential sabotage from the islands’ large Japanese population, and, in 1936, he urged the military to keep a list of “those who would be the first to be placed in a concentration camp in the event of trouble.”

That list was consulted in the days following the Pearl Harbor attack. Thousands of prominent Japanese American and immigrant businesspeople, newspaper editors, priests, fishermen, and politicians were detained and interrogated. They were brought to military camps, city and county jails, as well as a plantation gymnasium in Kauai, a Japanese language school on the Island of Hawaii, and the Sand Island Detention Camp in Oahu.

Because it would hurt the Hawaiian economy to lock up one-third of its population, the confinement process on the islands was more selective than on the mainland. But following Roosevelt’s Executive Order 9066 on April 1, 1942, all Japanese American men, women, and children on the mainland were forcibly removed from their homes and sent to incarceration centers.

At Honouliuli, as at the other camps, Wakatsuki says, “People struggled. It was an uncomfortable existence. Separated from their families, they didn’t have their support system, space, or privacy. People were trying their best to stay motivated and handle it.” Some passed the time painting and drawing; others prayed and journaled.

During World War II, life in Hawaii was restricted even for residents not confined behind fences or watched by armed guards. Curfews and blackouts were instituted; gas was rationed; and everyone had to carry gas masks. The courts were run by the military.

To guard against attacks, the military unraveled barbed wires on Waikiki’s white-sand beaches. Residents were fingerprinted and issued identification papers. “The Japanese immigrants, or issei, first-generation immigrants, had to obey additional restrictions,” says Kurahara. They had to surrender weapons, binoculars, shortwave radios, and cameras to the police, and weren’t allowed to gather in large groups, move without permission, or speak Japanese.

Japanese language schools and teahouses were shuttered or used for military purposes. The government took over Shunchoro Tea House and converted it into an emergency fire and first-aid station. “When the war broke out, all Japanese businesses had to cease,” says owner Laurence Fujiwara, Jr., the grandson of its original owners. “But people used to sneak up here to get information and talk story.” Renamed Natsunoya, the restaurant near Honolulu is the last remaining historic Japanese teahouse in Hawaii.

(Explore why the U.S. has so many Chinatowns.)

On the Island of Hawaii, some residents were held at the Hilo Independent Japanese Language School, where the kindergarten building was turned into a jail. The school, along with many others, never recovered.

Before World War II, there were more than 180 Shinto Buddhist shrines and temples around Hawaii. These symbols of Japanese culture and religion were also targeted during the war. “There was this presumption that if you were Buddhist or not of Christian faith, you were un-American or anti-American,” says Duncan Ryuken Williams, author of American Sutra: A Story of Faith and Freedom in the Second World War.

Some were taken over by the military; others were vandalized, looted, and set afire. There were reports of soldiers desecrating Buddhist statues, using them for target practice, or simply throwing them in the river. Their religious leaders were also imprisoned, leaving it up to Japanese wives, elderly priests, and white priests to protect and maintain sanctuaries including Honpa Hongwanji Mission of Hawaii in Honolulu and the Izumo Taishakyo Mission of Hawaii. The latter, one of just a handful of Shinto shrines left in the U.S., is a striking wooden A-frame structure with a white torii gate that welcomes visitors for monthly blessings and autumn festivals.

The aftermath of war

By the end of WWII, not a single Japanese American was convicted of espionage. Decades later, reports surfaced indicating that military intelligence about Japanese sabotage in Hawaii prior to Pearl Harbor were fabricated.

Thousands of second-generation Japanese Americans (nisei) answered the call of duty when the U.S. War Department announced that it was forming an all-Nisei combat team in 1943. The segregated 442nd Regimental Combat Team and the 100th Infantry Battalion fought valiantly in France, Italy, and North Africa.

(Learn more about the Japanese Americans who fought for the U.S. in World War II.)

News of the soldiers’ heroic sacrifices may have led to the military easing restrictions on the islands in 1945. Such patriotism was credited to paving the way for Hawaii to become a state in 1959. “Their heroism in battle following years of distrust and prejudice has long been considered a major factor in convincing Congress to grant Hawaii statehood,” says Jim McCoy, director of communications of Pacific Historic Parks, a group overseeing monuments to U.S. history in the region.

The most-decorated unit in the U.S. Army, along with the Military Intelligence Service and the 1399th Engineer Construction Battalion, are honored in exhibits at the U.S. Army Museum of Hawaii, 442nd Veterans Club, and Pearl Harbor.

U.S. Senators Spark Matsunaga and Daniel Inouye, both veterans from Hawaii, were instrumental in the passing of the Civil Liberties Act of 1988, when the U.S. government formally apologized for the grave injustice done to Japanese Americans. For many, the official acknowledgement lifted their shame and started the healing process.

“My husband told me that a great weight came off his chest when he received the letter of apology written to him by his president,” says Kurahara, whose late husband was incarcerated as a teen at Tule Lake War Relocation Center in California. “It’s important to pass on the history of incarceration based on race prejudice, war hysteria, and the failure of political leadership. If we don’t, we remain ignorant of what has happened in the past, and it can and will happen again.”

Rachel Ng is an award-winning, Hawaii-based writer who specializes in food, travel, and culture. Follow her on Instagram.

Michelle Mishina Kunz is a Hawaii-based photographer who specializes in portraits, culture, and travel. Follow her on Instagram.