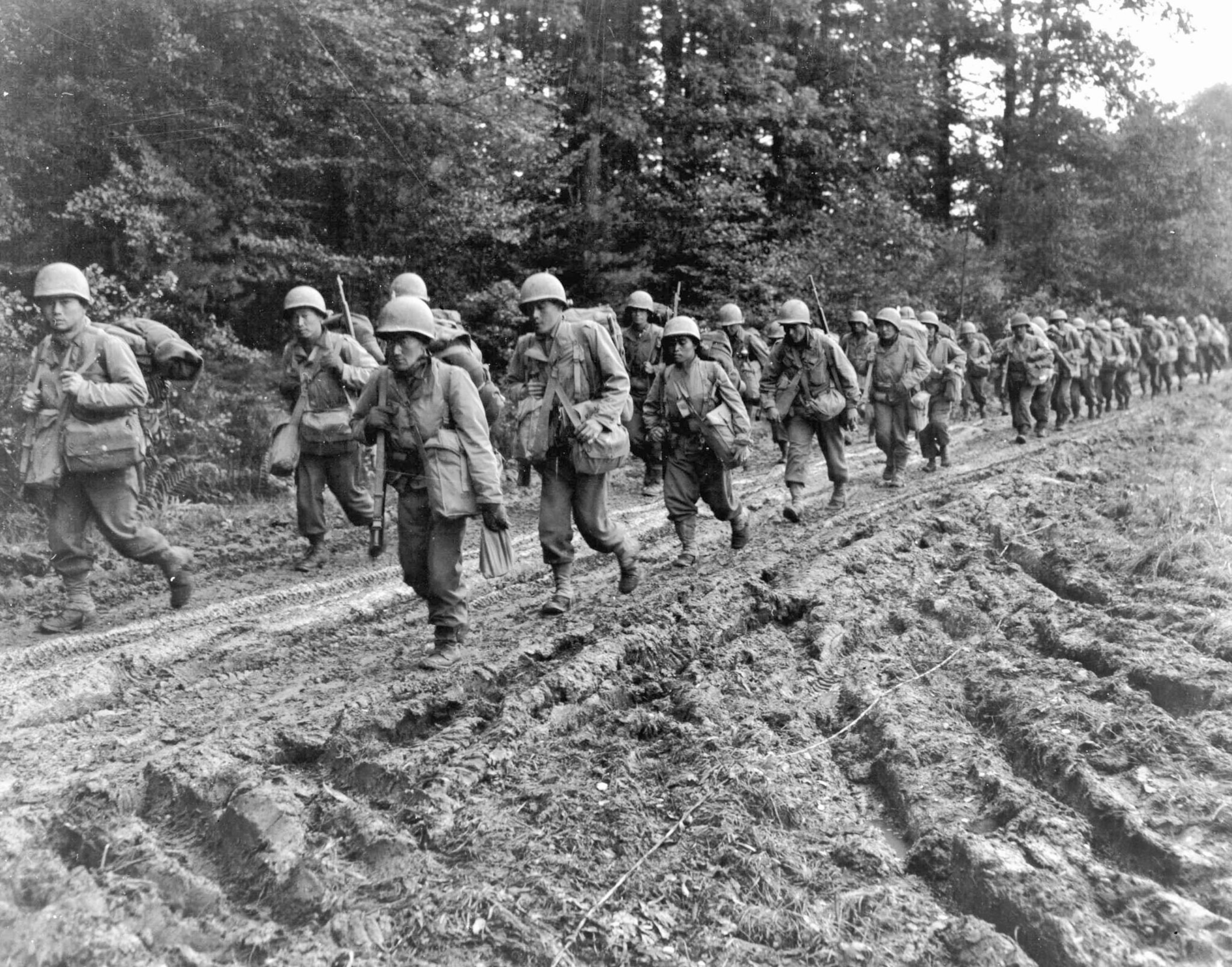 The U.S. tried to ban them from military service, but these Japanese-American veterans ultimately became some of the most decorated soldiers in history.

Japanese American infantrymen of the U.S. Army's 442nd Regimental Combat Team hike up a muddy road in Chambois, France, in late 1944. The men fought for the right to serve their country, even as it treated Japanese immigrants with suspicion and hostility.
Photograph via Niday Picture Library, Alamy Stock Photo

Joseph Ichiuji, bags packed, kissed his mother goodbye and got a pep talk from his father. Then he shipped out to serve in the U.S. Army in the European theater of World War II.

But though his destination was shared by thousands, Ichiuji’s 1943 journey began in a very different place than most Army recruits. When he volunteered to serve his country, Ichiuji was confined at Poston War Relocation Center, an internment camp in southwestern Arizona.

“Here was my chance to prove I was a loyal American citizen, to serve my country,” the Japanese American recalled in a 1999 oral history for the Hanashi Oral History Archives, which collects the reminiscences of Japanese American war veterans. “I thought that was the only way to get out of the camp.” He would go on to help liberate the Nazi concentration camp Dachau in April 1945.

Japanese Americans like Ichiuji wanted to serve, even in a world war that pitted the U.S. against their ancestors’ home country. But they faced discrimination along the way—and when they did gain the right to serve, predominantly in the U.S. Army, they went to war for a nation rife with anti-Asian sentiment that had incarcerated about 120,000 Japanese Americans. (This photographer spent years recording the lives of interned Japanese Americans.)

Between the 1880s and 1907, a wave of Japanese immigrants arrived in the U.S. But while some volunteered for U.S. military service before World War II, they ran up against both racism and discriminatory laws that had long excluded them from U.S. citizenship. Despite those barriers, at least 2,000 Asian-born men served in World War I. Many hoped they would gain citizenship for their sacrifice, but were denied.

Anti-immigrant sentiment grew between the world wars, and the country banned further Japanese immigration with the Immigration Act of 1924. Unlike their parents, who were referred to as Issei (first generation), the Nisei (second generation) were U.S.-born and thus had American citizenship.

We know but one loyalty and that is to the Stars and Stripes.
ByUniversity of Hawaii ROTC cadets

In the lead-up to World War II, the U.S. Army made a lackluster attempt to recruit Nisei who were fluent in Japanese to become interpreters and translators. The effort ran into roadblocks, though, when recruiters found that far fewer Nisei spoke fluent Japanese than they had expected. The Army’s survey of potential participation, writes historian Masaharu Ano, “showed that the children of Japanese immigrants had become far more Americanized than they were thought to be.”

This irony became clear when Japan launched a surprise attack on Pearl Harbor in December 1941. There were already about 5,000 Nisei in the U.S. Army, most of them in the Hawaii Army National Guard. There, they both witnessed the attack and responded in its immediate aftermath. Japanese American college students also enlisted in the Hawaii Territorial Guard after the attack and others showed up at recruitment offices on the mainland, part of a wave of hundreds of thousands of Americans who volunteered for service in a burst of patriotism.

Although they were willing to fight and even die for the U.S., it was assumed that Japanese Americans had split loyalty at best. In Hawaii, the National Guardsmen were stripped of their guns and ammunition, segregated, and assigned tasks like digging trenches or putting up barbed wire. In January 1942, all Nisei in the Hawaii Territorial Guard were informed that it was being disbanded. They were discharged from their units without explanation—only to learn the guard had been re-formed the next day without them. (America has a long history of scapegoating its Asian citizens.)

A month later, President Franklin D. Roosevelt issued Executive Order 9066, which authorized the creation of military areas from which “any or all persons”—code for people of Japanese ancestry—might be excluded. This laid the legal foundation to “evacuate” about 120,000 Japanese Americans from their homes and forcibly incarcerate them. Though Japanese Americans were rounded up across the mainland—most of them from their homes on the Pacific Coast—officials decided not to do so in Hawaii due, in part, to the infeasibility of incarcerating more than 40 percent of its residents.

Nisei men already serving on the mainland were transferred, discharged, or forced into menial jobs. Though some men of Japanese ancestry were accepted by military recruiters and draft boards, most were classified as 4-C, “unsuitable for service because of race or ancestry.” On March 31, 1942, Nisei were expressly forbidden from being inducted in the armed forces.

Despite the flagrant anti-Japanese sentiment of the American public, Nisei men still clamored to serve. Devastated by their dismissal from the Hawaii Territorial Guard, a group of University of Hawaii ROTC cadets petitioned Hawaii military governor Delos Emmons to let them help with the war effort.

“We know but one loyalty and that is to the Stars and Stripes,” they wrote. “We hereby offer ourselves for whatever service you may see fit to use us.”

One against the enemies in the Pacific and Europe, and the other against racial prejudice in our own country. We fought superbly and bravely. I’m very happy I was a part of that.
ByJoseph IchiujServiceman in the European theater of World War II.

Despite being initially stripped of weapons and segregated, Nisei National Guardsmen had been allowed to continue serving on Oahu and faithfully patrolled Hawaii’s beaches. But their fate changed when the military got wind that Japan’s navy was headed toward Midway atoll near the Hawaiian Islands in May 1942. Concerned about whether Nisei could be trusted should Japan invade Hawaii, the U.S. Army secretly shipped all 1,432 of them to Camp McCoy in Wisconsin. As the government waffled on what to do with the newly named 100th Infantry Battalion (Separate), the soldiers, most of whom had not even been able to say goodbye to their loved ones before being shipped out, underwent basic training.

Then sentiment began to shift. The men’s exemplary discipline and performance during basic training helped resolve the now furious debate over whether to allow Japanese Americans to serve in combat. So, ironically, did Japanese propaganda pointing to America’s racism. Embarrassed by the enemy’s finger-pointing and impressed by the Nisei soldiers, in February 1943, the military created the 442nd Regimental Combat Team, an all-Japanese unit. More than 10,000 Nisei men volunteered from Hawaii, and another 2,300 from internment camps.

In summer 1943, the 100th headed to North Africa, where they were assigned to guard German POWs instead of engaging in battle. But the battalion’s commanding officer lobbied to join active combat, and the 100th ended up participating in the Allied push through Italy. There, it became known as the “Purple Heart Battalion” for the tremendous casualties its members suffered. The 100th shrank by over half before it was absorbed into the 442nd, which arrived in Europe in May 1944.

Another 6,000 Nisei men were recruited straight from the camps to serve as military linguists, and thousands of others were called up when the draft was reinstated for Japanese American men in early 1944. Not everyone was willing to go: Men in some camps staged protests, and more than 300, known as “No-No Boys,” were jailed for their refusal to serve. But others went into battle even as the U.S. continued to incarcerate their families. (Scenes from Japanese internment camps still resonate today.)

Those Nisei who did serve, writes historian James C. McNaughton, “did so not blindly or automatically, but in full knowledge that their country had not given their parents a fair shake.”

A legacy of bravery

The 442nd would become the most decorated unit in U.S. military history, earning more than 18,000 individual awards. The unit’s motto—"Go For Broke”—represented its members’ drive to prove themselves to the country that had tried to keep them from fighting.

As for Ichiuji, he ended up marrying a USO hostess and working for the government after the war. He retired from his government job after 37 years of service.

“We had two battles to fight,” he said in 1999. “One against the enemies in the Pacific and Europe, and the other against racial prejudice in our own country. We fought superbly and bravely. I’m very happy I was a part of that.”