Will the Karakorum's 'Savage Mountain' ever be summited in its most dangerous season?

As arctic cold blasts across the Midwest, many Americans are getting a little taste of what it feels like to be at the foot of the mountain known as K2 where -15 degrees is as warm as it will ever get during this winter season.

The difference is that the hardcore mountaineers who are currently stationed at K2 base camp have willingly sought out these inhospitable circumstances, all for the sake of making a climb that has long been considered impossible. If they complete the unlikely feat, they will have claimed one of the last remaining great prizes in mountaineering—the first winter ascent of the world's second-tallest mountain.

“You cannot imagine how much more difficult it is [to climb K2] in winter compared to spring or summer,” says Alex Txikon, speaking via satellite phone from the base camp, located at 16,700 feet on a boulder-strewn landscape blanketed in snow and ice. Txikon (pronounced chi-KON), who is from Spain's Basque region, is currently leading one of the two expeditions to K2 this winter. The other team is a multinational group of elite mountaineers from Russia, Kyrgyzstan, and Kazakhstan.

"It was a huge challenge just to reach base camp,” Txikon says, referring to the 60-mile trek from the nearest road through rugged, snow-covered mountain valleys to arrive at the foot of their objective.

The climbers are working their

up camps with supplies and then

returning to base camp to recover

and wait out bad weather. 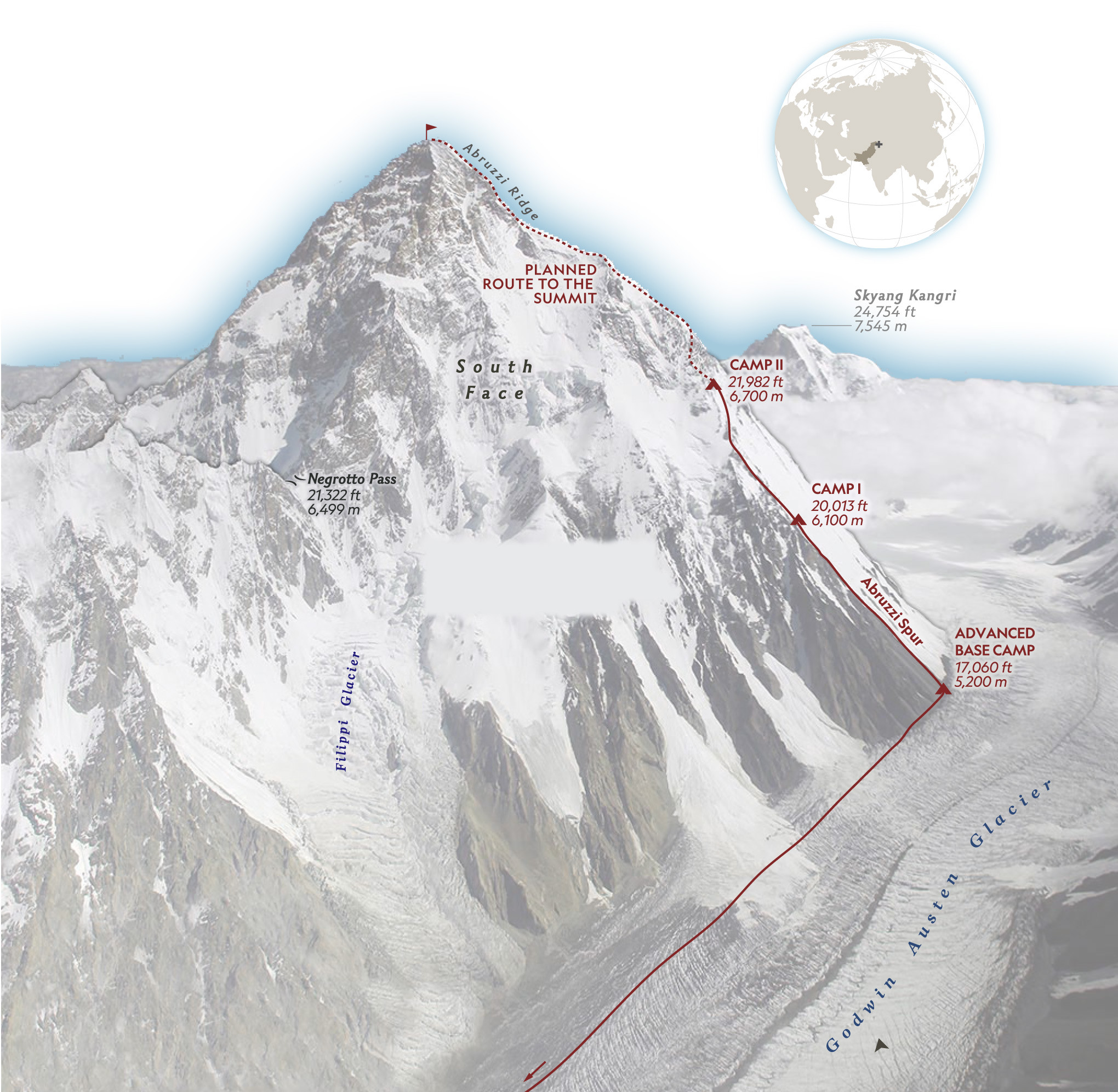 The climbers are working their

up camps with supplies and then

returning to base camp to recover

and wait out bad weather.

At 28,251 feet, K2, which straddles the Pakistan-China border, is about two and a half football fields shorter than Everest, but it's widely considered the planet's toughest and most dangerous mountain to climb, earning the nickname “Savage Mountain.” Unlike Everest, it is not possible to “walk” to the top; all sides of K2 are extremely steep and see frequent rockfalls and avalanches. One spot in particular, the infamous Bottleneck, a perilous couloir about 1,000 feet below the summit, was the site of a 2008 tragedy in which 11 people were killed in an avalanche.

“I can’t say it’s the last challenge for the 8,000ers,” Txikon says. “But it is one of the last great challenges.”

Txikon, with his tree-trunk thighs and burly frame, fits the physical paradigm of a hulking mountaineer, yet he is soft-spoken, with a goofy grin, and the first word most acquaintances use to describe him is “kind.” But his soft demeanor belies a fierce drive to get to the top of difficult summits, which has distinguished him as one of the world's most accomplished and ambitious alpinists. In 2016, Txikon was part of a team that completed the first winter ascent of Nanga Parbat (8,126 meters), a mountain that had been attempted in winter more than 30 times before Txikon, Simone Moro of Italy, and Ali Sadpara of Pakistan succeeded.

“You cannot compare K2 with Nanga Parbat,” Txikon says. It would be as if, upon reaching Nanga Parbat's summit, another 1,600 vertical feet of terrain still remained. And that final section, according to the understated Txikon, “is quite complicated.”

“The Sherpas are much stronger than many more famous climbers,” Txikon says wryly. This group joined Txikon on two consecutive, ultimately unsuccessful winter trips to Everest over the last two years, so they have a lot of experience together climbing in these extreme conditions. Having been shut down by Everest in winter twice, however, the team wanted to mix it up and try a new objective to keep the motivation high. Despite it being a far tougher mountain, perhaps they'd have better luck on K2, they reasoned.

Also joining Txikon’s team is Paweł Dunaj, Marek Klonowski, and Waldemar Kowalewski, all from Poland. Climbing the 8,000ers in winter has become something of a Polish national pastime; 10 of the 13 winter ascents of 8,000ers were claimed by Polish climbers.

Kowalewski, who joined the expedition at the last minute, has since sustained the first injury of the season, when he was struck in the clavicle by a falling rock en route to Camp 1. He returned to base camp and was airlifted by helicopter to receive medical treatment. He's expected to fully recover.

Two other members of Txikon's team, Jon Barredo and Eva Robles (the expedition's sole female participant), both members of the trekking crew (not climbers), were also evacuated via helicopter because Barredo had a pain in his knee, and Robles decided to accompany him.

Although Txikon's team arrived with the latest climbing and camping gear, they've discovered the value of traditional Inuit technology: building three large igloos, which stay 10 to 15 degrees warmer than winter tents, and offer greater shelter from the maddening noise of the incessant winds.

Txikon first learned the technique of constructing igloos from two Spanish friends and practiced building them in various areas throughout the Alps. Although traditionally climbers have relied on building snow caves for bivouacs on mountains during ascents, the use of igloos in a winter basecamp in lieu of tents is a novel approach.

“Sleeping in an igloo has been the best night’s sleep in a winter base camp,” Txikon says. And better rest at base camp could help with recovery and performance as Txikon and his teammates begin establishing fixed lines and stocking higher camps in advance of a summit push.

Txikon's team arrived at base camp on January 16, and as of January 28, they had already established Camp 2, at 22,000 feet, showing good progress on the Abruzzi Spur—the standard route up the mountain.

NO SPONSORS, NO PROBLEM

Climbing alongside Txikon’s team is a separate expedition of climbers led by Kazakh mountaineer Vassily Pivtsov, one of the few alpinists in the world to have summited all 14 8,000ers (in the spring/summer seasons) without oxygen. Txikon says the teams are not directly competing with each other, although all the climbers on the mountain hope to become the first to reach K2's summit in winter.

The team led by Pivtsov arrived in base camp on January 15 and includes some of the strongest high-altitude climbers in the world, including fellow Kazakhs Dmitriy Muravyov and Tursunaly Aubakirov; Artem Braun, Roman Abildaev, Konstantin Shepelin from Russia; and Michael Danichkin from Kyrgystan. But the group struggled to find a corporate sponsor, and instead has raised money through crowdfunding sources and selling T-shirts via their Instagram account. In order to save on excess baggage charges, each climber wore his full mountaineering garb—heavy down suits and double-walled mountaineering boots—on the plane ride into Islamabad.

Pivtsov’s team has been fixing lines independent of Txikon and are also making rapid progress with Pivtsov and Braun establishing Camp 2 at 22,300 feet, where they've reportedly spent a night acclimatizing.

Despite the Russians' lack of funds, Adam Bielecki, who was part of last winter’s dramatic, though ultimately unsuccessful, Polish expedition to K2, acknowledges the team's prowess. “You don’t go to K2 in winter unless you’re a really strong climber,” he says. Nevertheless, he believes their chances of succeeding—like any climber's—are very slim. “It’s a really tough mountain to climb in winter,” he says. “It’s easy to count the number of reasons they would fail.”

The Joy of Hell

K2 has long been considered too tough even to consider in winter. In fact, a winter ascent has only been attempted five times prior to this year. “It’s the worst place on Earth,” Bielecki says. No team has even made it past 25,100 feet—and with the summit standing at 28,251 feet, those last 3,000 feet are going to be the toughest.

The cold presents one of the most dangerous challenges, with temperatures dropping to -65 on the mountain. In such conditions, even the most benign mistake can have catastrophic consequences—a dropped glove can lead to frostbite in minutes, or even just touching bare skin to an ice axe for a moment can rip off a layer of skin. These or any one of a number of mishaps could force a climber to abandon the mountain.

But the wind is the real killer and looms as one of the major differences between winter and summer seasons. In winter, the Karakoram range, where K2 is located, experiences a stronger jet stream than the Himalaya. Gusts can reach hurricane force and pluck climbers off the side of the mountain in an instant. This partly explains why 8,000ers in Nepal, including Everest, were the first mountains to be summited in winter, while it would be more than 20 years before the 8000ers in the Karakoram were sought out as winter objectives.

Another factor that adds significantly to K2’s difficulty in winter is the lack of snow on the mountain. The strong winds blow off the snow, leaving behind bare rock and brittle ice that makes the climbing considerably more technical and slower, thus exposing mountaineers to the brutal cold for longer periods.

Winter is also a time of low barometric pressure, which translates to even less available oxygen than during high pressure weather windows in the summer. None of the climbers are planning to use oxygen to reach the summit, although at least Txikon’s team is bringing spare oxygen bottles in case there’s an emergency that requires rapid descent.

“It’s a hellscape,” says Cory Richards, a National Geographic photographer and the only American to have climbed an 8,000er in winter: Gasherbrum II (8,035 meters), with Denis Urubko and Simone Moro, in 2011. “Take all the complications of climbing an 8,000-er during the standard season, and multiply it by a factor of 10.”

It begs the question as to why anyone would want to climb in winter.

“Winter is a hard reset to what 8,000-meter climbing has, in many ways, become,” Richards says, referring to the throngs of climbers who flock to the normal trade route during typical seasons. “It’s a paradigm of what an 8,000-meter experience once was. The severity of winter is sort of quietly amplified by the fact that you’re alone and self-sufficient. There’s something really beautiful and stoic about that.”

Bielecki thinks of climbing in terms of joy and satisfaction, with the latter providing a stronger source of motivation. “With winter climbs, there’s not much joy, but the satisfaction of doing something that nobody’s ever done—and isn’t known to be even possible—this is something for sure.”

As for what it will take to succeed on K2, Txikon has his own ideas. “You need to be clever, fast, strong enough, have respect for the mountain, the wild areas, and the local people. You need to have empathy and a really good team. Never forget to be patient, and always remember that the real success is coming back alive.”

Meanwhile, the clock is ticking. The cutoff for an undisputed winter ascent is February 28, the last day of the meteorological winter. Though some alpinists, including Txikon, argue that a summit before March 20, the end of the astronomical winter, would count. Three of the 13 other 8,000-meter winter summits occurred during the first week of March.

You can follow Txikon’s and the Russians’ progress via their satellite trackers.