National Geographic Adventurers of the Year Adam Bielecki and Denis Urubko sacrificed their chance to make history on K2 to help climbers on a nearby peak.

National Geographic Adventurers of the Year Adam Bielecki and Denis Urubko sacrificed their chance to make history on K2 to help climbers on a nearby peak.

Editor's Note: This week we are celebrating our 2019 Adventurers of the Year. To do that, each day we will reveal a new honoree. Come back every day to discover the stories of six people who pushed adventure further to redefine what's possible. Read about Monday's honoree here, and Tuesday's here.

An elite Polish-led team was poised at the base of K2, hoping to make the first winter ascent of the world's only 8,000-meter peak that hadn’t been climbed in winter. On the team were Polish superstar Adam Bielecki, 34, and the unstoppable Kazakh alpinist Denis Urubko, 45. A message arrived at base camp that a team was in trouble on Nanga Parbat, just 124 miles away. It was from French high-altitude climber Elisabeth Revol. She and her Polish partner, Tomasz Mackiewicz had summited Nanga Parbat, but the message was clear: Mackiewicz was in trouble, he could no longer move, he needed to be evacuated. 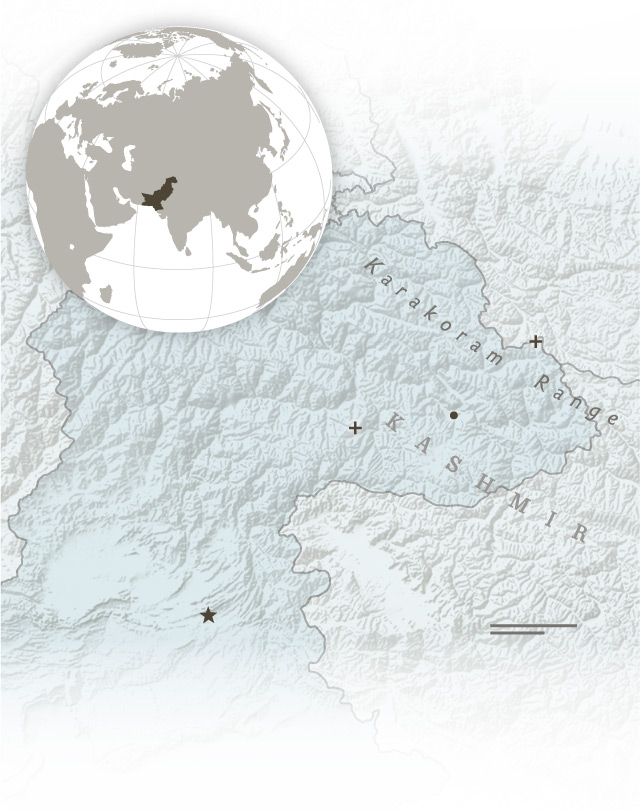 Revol and Mackiewicz were not newcomers to Nanga, also known as the “Killer Mountain" because it claims the life of one out of every five climbers who attempt it. So far Revol and Mackiewicz had defied such odds. This was Revol's fourth attempt and Mackiewicz’s seventh. Their goal had always been to make the first winter ascent, something no longer possible since Muhammad Ali Sadpara, Simone Moro, and Alex Txikon did so in 2016. But when they summited on January 25, 2018, they succeeded in making the first alpine-style winter ascent and the first female winter ascent. When Revol asked Mackiewicz how he was feeling at the summit, he answered, “I can’t see you. I can’t see anything.” His snow blindness indicated that he was suffering from altitude sickness. When they reached a crevasse at around 7,280 meters, Mackiewicz could go no further. He was having trouble breathing, blood was seeping from his mouth, and his nose was white with frostbite. At 11:10 p.m., Revol sent text messages to her husband, Jean-Christoph; Mackiewicz’s wife, Anna; and a friend, Ludovic Giambiasi.

Over on K2, the Polish team was led by Krzysztof Wielicki, an original member of Poland's famous “Ice Warriors” who pioneered winter mountaineering. Wielicki had personally claimed first winter ascents of three of the planet's 14 peaks that are taller than 8,000 meters, including Everest, and he had recruited the team and planned the expedition that would claim the last 8,000 meter winter prize—K2.

But after hearing of the stranded climbers, Wielicki knew immediately that there were only a handful of people in the entire world who were currently acclimatized enough to the high altitude conditions and in position to attempt a rescue of Mackiewicz and Revol. They were all in his base camp.

But it wasn't only his decision. He asked his team if anyone would be willing to interrupt their K2 climb to help with the rescue. “Every single one said yes,” he recalled. He chose Bielecki, Urubko, Piotr Tomala, and Jarosław Botor. All four were major contributors to the K2 effort, but Bielecki and Urubko were widely considered the team's best chances to make the summit. Choosing Bielecki and Urubko to go to Nanga could be a crippling blow to the K2 effort.

Bielecki was an obvious choice for the first summit team, since he had already climbed K2 in summer, and he had first winter ascents of both Broad Peak and Gasherbrum I. When Bielecki first learned of the situation on Nanga, he was terrified. He had been in enough dicey winter situations to understand how serious it was. He knew Mackiewicz and Revol from a previous Nanga expedition and was particularly impressed with Revol. When the opportunity arose to help with the rescue, Bielecki didn’t hesitate, despite the potential impact on his chances for K2. “At the moment I did not care about K2,” he said. He may have been thinking, as well, about the debacle following his winter ascent of Broad Peak. When two of the four summit climbers died on the descent, there was a lot of finger-pointing. Bielecki had taken the brunt of the blame for not finding a way to save his climbing partners and was undoubtedly not keen to repeat the experience.

Urubko, a military-trained Kazakh climber, with 19 8,000-meter summits on his résumé, including two in winter, was the golden arrow in the quiver for the K2 team. Everybody knew that. Urubko either summited peaks or rescued people trying to summit peaks. His dramatic rescue attempt of Iñaki Ochoa on Annapurna in 2008 was the stuff of legend. Urubko felt no qualms about turning his back on K2, at least temporarily, in order to help his friends on Nanga. "I felt that for my friends, my team, it will be necessary to use my efforts and my experience in high-altitude rescue," he said.

Two high-altitude helicopters picked up the four rescuers from the K2 base camp on January 27 and delivered them just below Camp 1 on Nanga, at 5:10 p.m. "The helicopter pilot took a very strong risk for this mission with his life," Urubko later told Alpinist. " It saved me and Bielecki, and other members of the rescue team, around five to six hours of the very difficult rush over the deep snow over the glacier." The men quickly came up with a strategy: Piotr and Jarosław would remain at the landing site for backup while Bielecki and Urubko would start climbing. At 5:30 p.m. the Killer Mountain was already enveloped in darkness. The men clicked on their headlamps and began ascending the Kinshofer Route

In the meantime, at Mackiewicz’s urging, Revol had started down without him. She left him in a sleeping bag with most of their gear and began descending the Kinshofer Route. “I don’t know if Tomek pushed me to go down to save my life,” she later reflected. “I knew only that I had to go down to save his. And I knew that if I went down the Kinshofer route, I could get safely to Camp 3—no crevasses in that stretch, and quite easy. But after Camp 3, I also knew that I could go no farther. It was a prison at Camp 3. From there I would need a rescue. So, it was a risky decision.”

Bielecki and Urubko raced up the mountain—keeping up a nearly superhuman pace of 150 meters an hour for eight hours up the steep terrain. Urubko explained their extraordinary speed: "Adam and me, we were very well-trained…and of course we were already acclimatized…and it helped us to expend, in short time, a lot of efforts.” They both knew the route, but climbing it at night was another game altogether. They went as light as possible: no bivouac gear, no sleeping bag, just a bit of food, some drink, a bivvy sack, a stove, gas, and spare mitts. Along the way, they broke one of the cardinal rules of mountaineering: no grabbing onto old fixed ropes, which might be severed or degraded. Luckily, they all held.

Urubko discovered Revol at around midnight. "One moment I heard her screaming, 'Adam I can hear her!'" Urubko said.

“A moment later he shouted, 'Adam, I got her! I got her!'" Her hands were so badly frostbitten that she couldn’t even manipulate her carabiners. They moved her to a ledge where they could sit together, replace her thin gloves with warm mitts, then heat some water and give her some pills to help stimulate her circulation. Revol told them of her lonely descent, of her night in a crevasse at 6,100 meters, of her hallucinations, of having removed her boots for a phantom woman who had requested them, and of Mackiewicz's frightening state.

They spread out the bivouac sac and nestled Revol between them. "She put her legs on me and she lay down on Adam's side," Urubko explained. They watched as she slept. They talked quietly about what to do next. Should they get Revol into a safe spot, secure her to the mountain, and continue up to Mackiewicz, who would somehow have to be carried down? Revol had explained that Tomasz was unable to move. “We understood that if we left Revol and went up for Mackiewicz, she would die,” And Mackiewicz was too high for a helicopter to operate.

With her damaged hands, it was clear that she would be unable to rappel down the steep terrain that lay below them. They took turns lowering her, doing tandem rappels and climbing alongside her on the snow slopes. At 11:30 a.m., 18 hours after they had discovered Revol, they reached their teammates and the helicopters at Camp 1. She was flown to the Skardu hospital, and the next day to Islamabad. On January 30th, she flew back to France to begin treatment. During all this time, Revol assumed that the rescue was continuing for Mackiewicz. “I didn’t realize that he died until I was back in France,” she later explained. “I was convinced that he could survive. He always survived. I was so sure that he was alive.” Not this time.

The rescue team returned to K2 base camp. From that moment on, they were inundated with calls, emails, media requests for interviews, every detail about the rescue on demand. I was in Warsaw at the time, and saw the public’s insatiable appetite for the story, particularly for Bielecki and Urubko. Adam tried to explain the full scope of the rescue. "We are the ones who climbed to Eli, but it was possible because of involvement of many people,” he said.

Their attempt to climb K2 soon fizzled. It was a combination of factors: bad weather, a distracted team, rockfall and injuries, lethargy at base camp, disgruntlement with the leadership, and a rogue, solo attempt by Urubko. But upon reflection, Bielecki doubts that their rescue was the cause of their failure on K2. “I don’t think that it made any difference,” he said.

When there was talk of the rescue team receiving the French Legion of Honor, the highest civilian award in France, the rescuers balked. “I think we did nothing extraordinary,” Bielecki explained. “Everybody would do it. It’s the obligation of every climber to help others. It’s the duty of every man.”

Maybe so. But I had the opportunity to observe the public response to Urubko and Bielecki, Tomala and Botor, several times in the last 12 months. At Polish mountain festivals in Zakopane, Lądek, and Kraków, I watched as 2,000 people rose to their feet to honor them, to thank them. I saw tiny Revol enter the stage, still suffering terribly from post-traumatic stress, fragile and emotional, engulfed by Urubko and Bielecki’s embrace. And finally, I saw Anna, Mackiewicz’s widow, approach them: her husband’s last climbing partner and the rescuers who ultimately had to leave him on the mountain of his dreams. A poignant reunion, it was filled with affection, thankfulness, and shared grief—fitting reward for the brave rescue team.