What’s harder than summiting Everest? Getting climbers to respect it again.

Cory Richards sat in a lounge chair in his office in Boulder, Colorado. He casually propped one of his legs up on the chair’s arm, and a three-month-old puppy named Rupert jumped into his lap.

“How would you rather die?” he asked, gently petting the dog. “Fall while free-soloing El Cap or die on Everest?”

It was a rhetorical question, framed to get at an enduring topic that irks Richards, which is that Mount Everest—with its reputation as an “easy” trophy summit for rich people who pay mountain guides and workers to do all the work and take all the risk—doesn’t get the respect it deserves among “core” climbers.

“If you fall soloing El Cap, in two or three seconds it’s over,” he said. “But if you get into trouble on Everest, your death is likely going to be a very long, drawn-out, scary process. You’ll start feeling deeply uncomfortable, which means your brain has started to swell. You’ll vomit. And you’ll begin to grasp the gravity of the situation you're in. You’ll realize that you can't get down, and then you’ll slowly either slide into madness or choke on the fluid in your own lungs.”

His pale-blue eyes were piercing beneath a spiky coif of sandy hair—hair Richards had turned into the hashtag #HairByEverest when he Snapchatted his way to the summit in 2016 with Adrian Ballinger. He smiled, revealing a front tooth with a little, almost unnoticeable chip in it.

“I know which one I’d choose,” he said, stroking Rupert’s lazy head.

This year, Richards and Esteban “Topo” Mena, a mountaineer from Ecuador, are attempting to do something that hasn’t been done in a decade: establish a new route on Mount Everest in the best style they can achieve.

“Are you afraid you might die this year?” I asked.

Richards and Mena met on Everest in 2016, then again in 2017. While sitting in Advanced Base Camp, they’d find themselves staring up at the Northeast Face looking at a striking couloir and wondering whether it could be climbed.

“It’s one of the most obvious lines left on Everest,” said Richards while poring over a photograph on his computer. “To me, climbing a new route on Everest is the coolest thing. I’m so excited about it, I can’t wait.” 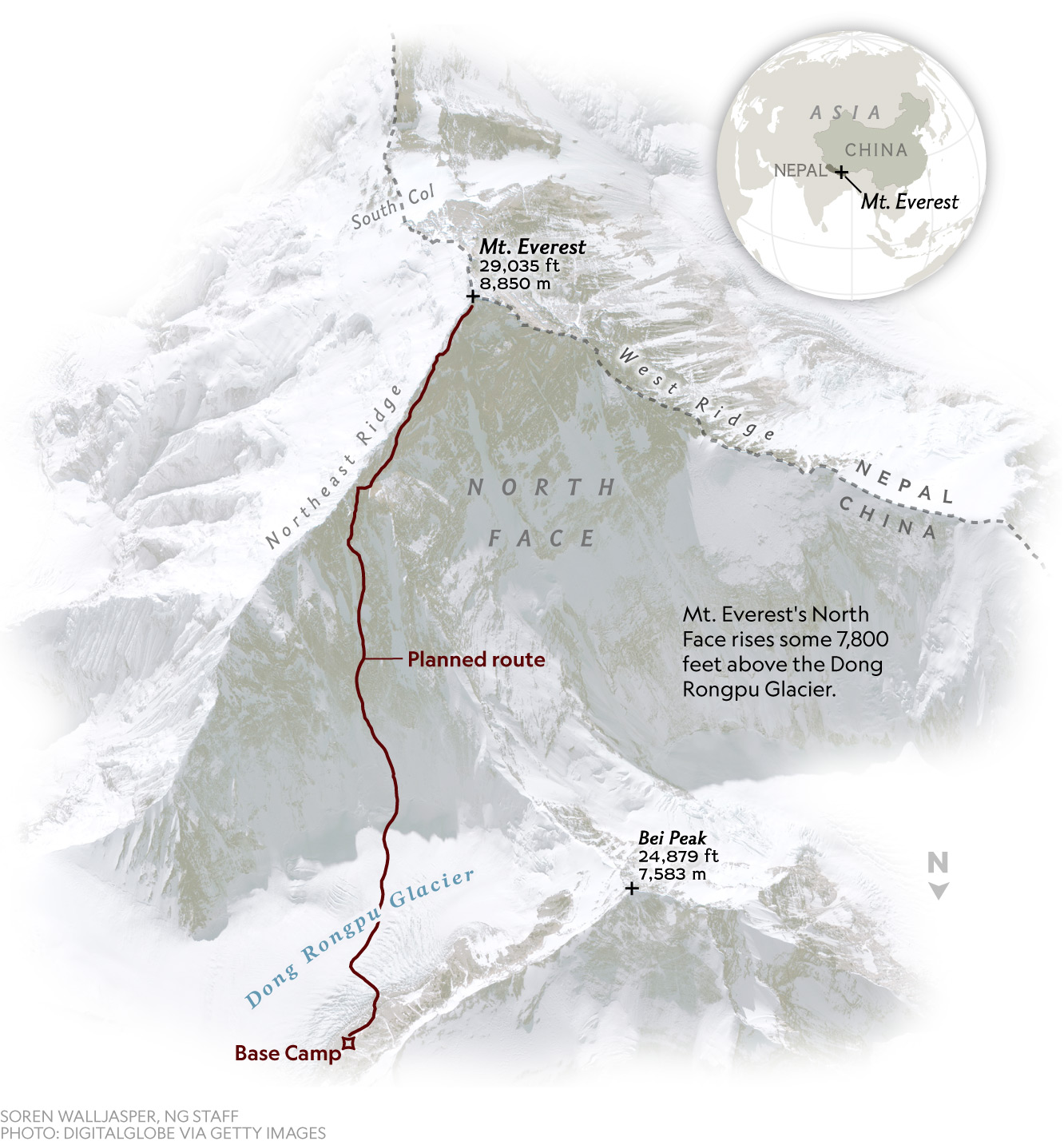 There are around 20 independent routes and route variations on Everest. Over 99 percent of the more than 5,000 individuals who have climbed Everest have taken just two of those routes to reach the summit. These climbers take either the South Col-Southeast Ridge, which ascends from Nepal, or the North Col-Northeast Ridge, which ascends from Tibet/China.

The mortality rate for climbing Everest has gotten down to around 3.5 percent, according to Everest climber and chronicler Alan Arnette. This impressively low mortality rate can be attributed largely to the installation of fixed ropes along the length of the mountain’s two standard routes, as well as the common use of oxygen tanks to mitigate the deleterious effects of altitude.

One look at the mortality rate of Everest’s non-standard routes, however, paints a very different picture. Only around 265 climbers are known to have even attempted to climb Everest via non-standard routes. By Arnette’s calculation based on information pulled from the Himalayan Database, those attempts have resulted in approximately 80 deaths, yielding a 30 percent mortality rate. In other words, you’re about 10 times more likely to die on Everest if you go off the beaten path.

Richards, 37, and Mena, 31, are hoping to pioneer an estimated 6,500 feet of new climbing on the Northeast Face before ultimately linking into the standard route on the upper Northeast Ridge. They plan to approach the new terrain using “alpine-style,” meaning without fixed ropes. However, if they succeed and reach the normal trade route, where ropes will already be fixed, they say they will use them, if not on the way up then certainly on the way down.

The climbers won’t be carrying oxygen. Both Mena and Richards have already climbed Everest without oxygen—Richards in 2016, and Mena in 2013.

“If they pull that off, more or less alpine style, and without oxygen,” speculates Dougald MacDonald, editor of the American Alpine Journal, “that certainly would be one of the most significant new lines on Everest in many years.”

Although the last time a new route was established on Everest was in 2009, by a team of Korean climbers on the Southwest Face, other climbers have made plans for a new route attempt. In fact, Richards and Mena aren't the first people to notice this couloir on the Northeast Face. In 2015, a team including Raphael Slawinski, David Goettler, and Daniel Bartsch stated their plans to tackle this exact line. However, their climb ended before it could even begin when a massive earthquake struck Nepal.

“There are a lot of people who have gotten up 13 of the 14 8,000-meter peaks without oxygen and have still not been able to do Everest, the tallest one,” says Richards. “The fact that both Topo and I have done Everest without oxygen pays into our confidence bucket … but we all know physiology can change. “

Both Richards and Mena boast impressive high-altitude résumés, most importantly with their ascents of Everest without oxygen.

When he was 19, Mena became the youngest person to climb the massive South Face of Aconcagua in Argentina. He has climbed Manaslu without oxygen, and has established extreme first ascents in Kyrgyzstan and China that have been recognized for their difficulty in the mountaineering world, including a Piolet d'Or nomination.

“Topo is a strong, technical climber with a lot of experience,” says Richards. “And he’s just fun; very lighthearted, goofy and curious. And he tries hard.”

In 2011, Richards, Simone Moro, and Denis Urubko climbed Pakistan's Gasherbrum II (26,362 feet) in winter, making Richards the first (and still only) American to have climbed an 8,000-meter peak in winter. That experience that nearly claimed the three climbers’ lives when they were caught in an avalanche on the descent.

Richards’ success on Gasherbrum II was double-edged. It helped launch his career as an adventure storyteller and National Geographic photographer, and it garnered him climbing sponsorships and recognition. Yet the success catalyzed his already lofty ambitions, while the near-death experience left him traumatized.

In 2012, Richards joined a National Geographic expedition to Everest. Despite having not yet climbed the mountain via the standard routes, he was planning to join an attempt at making the second ascent of the fabled West Ridge, a route established by a team of Americans in 1963, to commemorate the route’s 50th Anniversary. Richards, however, had a panic attack on the mountain and had to be evacuated.

“It was related to anxiety, but more and more I think it was my body telling me I wasn’t ready, and I wasn’t supposed to be there,” says Richards. “I was way more arrogant [in 2012]. The person that's going back to do Everest now is seven years older—and lot older in terms of experience. There's less arrogance, and less pressure, strangely. But at the same time, I want it more.”

Richards is no longer a sponsored climber, and he and Mena are self-funding their trip to the tune of $88,000. Richards sobered up years after admitting to having a problem with addiction, and has spent the better part of the last year training strictly for this trip. He’s been logging training days of that involve clocking 8,000-12,000 vertical feet, then stacking those days one after the other.

Should Richards and Mena succeed, the mountaineering community will almost certainly debate whether their line can truly count as a distinct new route, or whether it would be merely a variation on an existing climb.

There will also likely be debates about whether using fixed ropes high on the mountain would compromise any claim to making an “alpine-style” ascent of Everest.

“I bring up the ethical stuff because it's pre-emptive,” says Richards. “I know it's coming.”

Richards, however, hates these discussions. “The ethical debates in climbing, in general, are boring to me,” he says. “Who cares? We'll do what's best to get up the mountain and have fun doing it.”

From photographs, it seems like this couloir leads to a notorious section located on the integral Northeast Ridge called the Pinnacles, around 27,000 feet. The Pinnacles are believed to contain some of the hardest climbing on Everest, and are the site of many failed attempts, including at least two high-profile deaths. The great British alpinists Peter Boardman and Joe Tasker died here in 1982, for example.

Richards hopes to skirt below the Pinnacles and traverse across bands of shale to reach the point on the Northeast Ridge where the standard route is located.

“If we don't end up doing a new route for some reason,” says Richards, “we’d be just as happy to repeat something that hasn't been repeated. We don't care. We just want to go climbing and get off the normal route. Everest is just such a cool place—it’s so much more than the lines, the trash, and the dead bodies. And a piece of my heart just wishes people would see that.”