Honnold planned to climb Yosemite’s El Capitan without a rope. Chin would film it. But first they had to figure out how to talk about it.

This story appears in the November 2018 issue of National Geographic magazine.

When you are Jimmy Chin, you make a long list of rules for filming your friend Alex Honnold’s historic attempt to climb Yosemite’s El Capitan without using any ropes. First you will hire a team of world-class climber-cinematographers to rappel beside him as he climbs the nearly 3,000-foot granite face. No one is allowed to whisper, sneeze, drop a lens cap, dislodge a pebble—any of which might create the distraction that sends him hurtling to his death. Most important, no one is allowed to talk to Honnold about the epic climb, at least not directly. This is to avoid putting any pressure on him but also to keep from upsetting his precisely calibrated mind-set, a mixture of acute concentration, bulletproof confidence, and deep Zen calm. Instead of using the term “free soloing,” which means climbing without ropes or safety gear, you use his preferred euphemism—“scrambling.”

Immerse yourself in the experience of free solo climbing Yosemite’s El Capitan alongside Alex Honnold in this 360 video.

You follow these rules knowing that any notion of rules is contradictory to the very idea of free soloing, because in this ruthlessly unforgiving sport there really aren’t any rules, at least no written ones. That’s much of the point. Climbing without ropes is decidedly against all the rules, especially the rules of mountain safety, not to mention human logic. But if a free soloist falls, there is no denying the immutable, unyielding rule of gravity.

Some veteran climbers say there is no if a free soloist falls—only when. You can think of many who have fallen to their deaths, some you knew personally. And suddenly there it is: the vividly horrifying image of your friend flailing into the void.

But wait. That’s exactly what you’re not supposed to picture when your buddy is trying to do what some experts say is the most daring ascent ever attempted—what Honnold’s friend and fellow elite climber Tommy Caldwell called “the moon landing of free soloing.”

Such thoughts looped in Chin’s mind for more than a year as he and Elizabeth Chai Vasarhelyi, his wife and filmmaking partner, documented Honnold’s efforts to make climbing history. (Spoiler alert: He makes it.) The film, aptly titled Free Solo, is in theaters now.

“To film a climber with both the physical and mental ability Alex has, combined with the desire to take on something so ambitious and scary,” Chin says, “it’s the project of a lifetime, no doubt.”

Chin, 45, and Honnold, 33, first climbed together in 2009 as part of an expedition to Borneo to explore Low’s Gully, one of the world’s deepest slot canyons. Honnold had recently burst onto the climbing scene with a series of headline-grabbing free solos, including Yosemite’s Half Dome. Chin remembers being struck by Honnold’s boyish face and large brown eyes, which would inevitably earn him the nickname Bambi.

But Honnold’s youthful appearance belies his most exceptional gift—an uncanny ability to control his fear and focus on perfectly executing the task at hand (never mind that the task is reaching for a fingertip of rock while clinging to a cliff 1,000 feet up). It’s a gift that Chin shares in some measure. Three years before meeting Honnold, he climbed Mount Everest and skied down its icy, nearly vertical face.

After Borneo, the men started climbing together regularly, with Chin filming some of Honnold’s free solos. “We built up a lot of trust,” says Chin. “He trusted me to safely film him, and I trusted him to climb only what he felt good about and not to feel compelled to do rad stuff for the camera.”

Meanwhile Honnold had been privately contemplating what it would take to free solo El Cap. “After Half Dome it seemed like the next obvious thing,” Honnold says. “At the end of each season, I’d think I’d be ready to do it the next year, but then I’d look up at it and think, Whoa, that’s still too scary.”

Finally, in late 2015, Honnold told Chin and Vasarhelyi he was ready, and they agreed to work together in secret on a film about the climb. “It was very important that the film would be about Alex’s process,” Chin says. “Whether it ended with him summiting El Cap or deciding not to go for it didn’t matter. It was always about how do you even think about doing something so mind-bending.”

During the climb Honnold averaged a blistering 100 vertical feet every seven and a half minutes. To capture each move, Chin and the crew rappelled to key spots along the route. In the diciest sections, they set up remote cameras to avoid disrupting Honnold’s concentration.

Size of crew on free-solo day 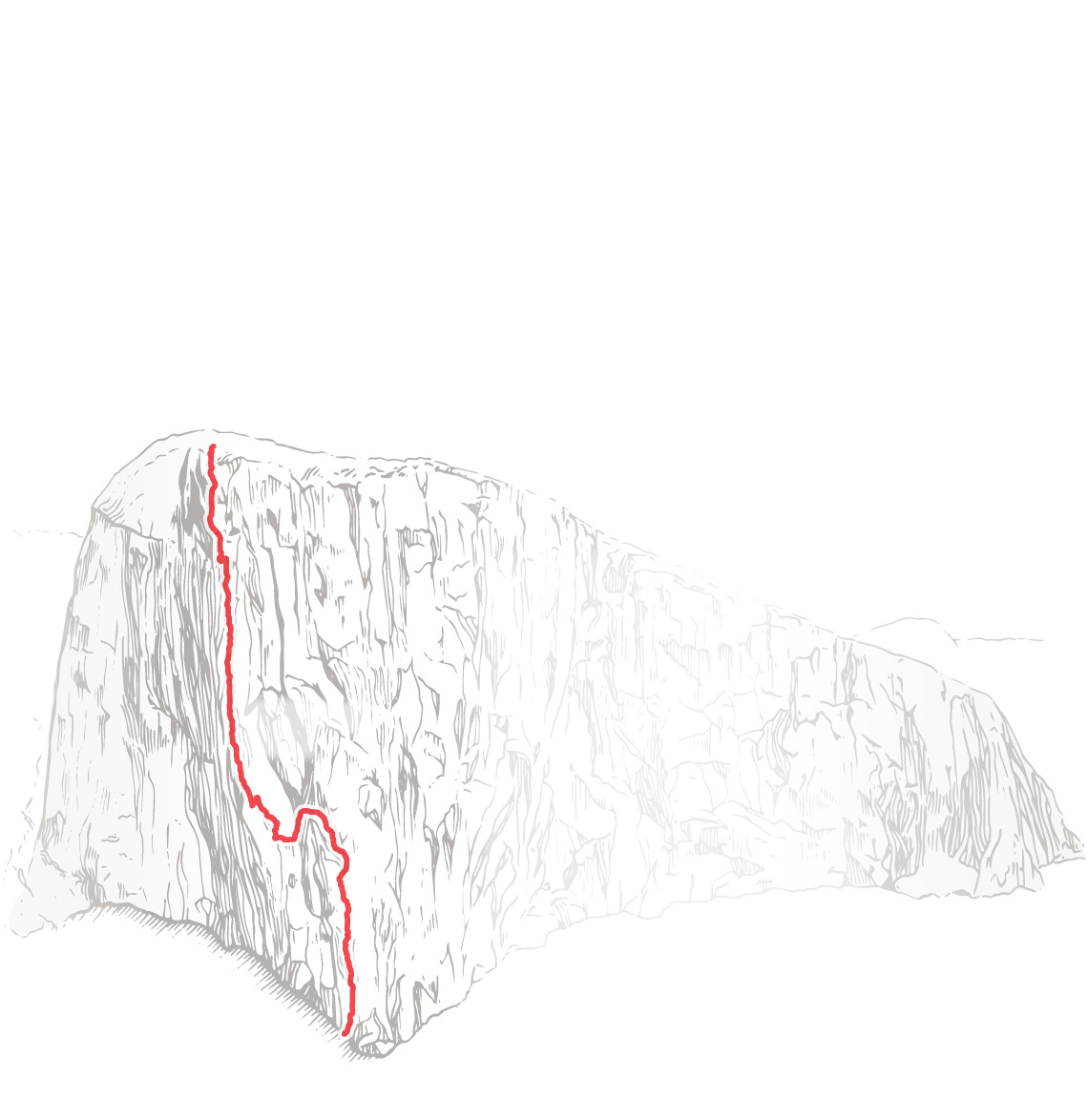 During the climb Honnold averaged a blistering 100 vertical feet every seven and a half minutes. To capture each move, Chin and the crew rappelled to key spots along the route. In the diciest sections, they set up remote cameras to avoid disrupting Honnold’s concentration.

above the Yosemite Valley floor at 9:28 a.m. PDT

Size of crew on free-solo day

Each practice session required many hours of preparation. Chin and the crew would speed climb an easy route up the east side of El Cap ahead of Honnold, lugging hundreds of pounds of cameras, ropes, and supplies. Then they’d rappel down Freerider and use a type of hand winch to keep pace with him as he climbed. “We all got in the best shape of our lives,” Chin says. But at the end of each marathon day, the mental loop of what-ifs would play: “Not a day went by that I didn’t think about the worst.”

Around 5 p.m. on June 2, 2017, feeling that he was at his peak, Honnold asked Chin if the team could be ready to shoot the next day. “I think I’ll go scrambling,” he said. Chin nodded, acting like it was no big deal: “My mind was racing with all the things we needed to put in place before it got dark, but I didn’t want to upset his mind-set, so I hung out with him for a while.” Finally Chin told Honnold he’d see him in the morning and walked slowly until he was out of his friend’s line of sight.