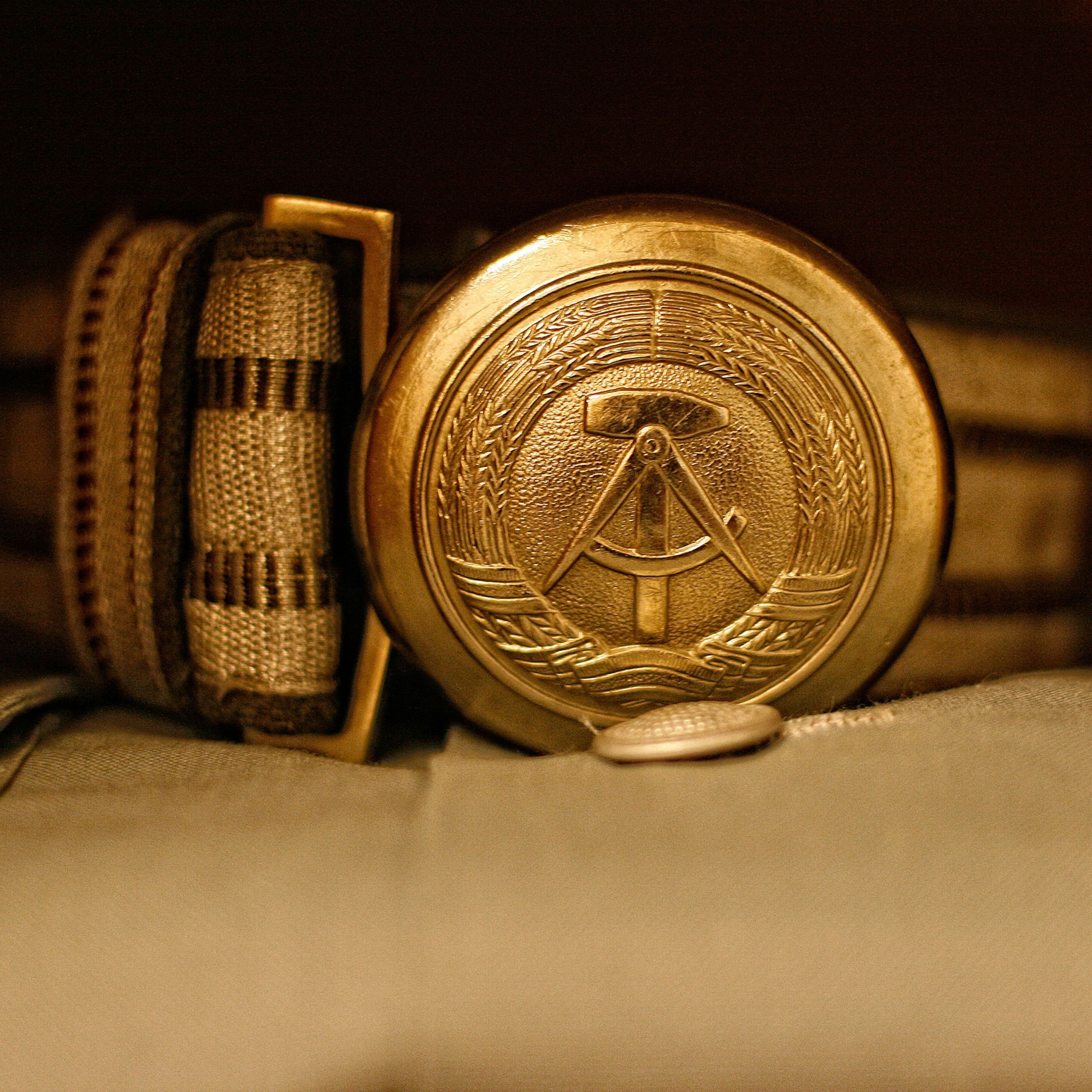 As Germany's secret-police archive shutters, reckoning for its victims continues

The Stasi archives, a repository of surveillance crimes against East German citizens, is moving to Germany's National Archives to ensure its pivotal role endures.

The national emblem of the German Democratic Republic on a belt that once belonged to a member of the Ministry for State Security. The East German ministry was also known as the State Security Service (Staatssicherheitsdienst), often just referred to as the Stasi.

BerlinWhen Siegfried Wittenburg first sat down to read the file compiled on him by the Stasi, East Germany’s secret police, he wasn’t sure what to expect. It was 1999, a decade after the fall of the Berlin Wall and the reunification of Germany. Wittenburg, 68, a photographer and former East German citizen, had spent a decade chronicling the regime. Among the images he captured were scenes of poverty, scarcity, and protest—things the East German government didn’t want seen at the time, leading them to censor some of Wittenburg’s photos at his exhibitions in the 1980s. Understandably, he was curious—and apprehensive—about the information his file might contain.

“I read it like a crime novel,” he says.

Wittenburg is one of the more than seven million people who have requested access to files at the Stasi Records Archive, housed in the secret police’s former headquarters in Berlin’s Lichtenberg neighborhood, since its opening in 1991.

Now, more than three decades after the fall of the Berlin Wall, the Stasi Records Archive officially has ceased to exist. In June, the files were absorbed into Germany’s National Archives, in Berlin, which is transferring them to new locations in each of Germany’s five eastern states. The archive’s most recent director, who also retired in June, will be its last.

When protesters in the 1989 Peaceful Revolution protected the Stasi Records Archive and its millions of files, they did so to ensure the preservation of the entire record of all-encompassing surveillance citizens of the German Democratic Republic faced from 1949 to 1990. The archive has been crucial to East Germany’s reckoning with its past. Its first director, Joachim Gauck, would go on to become the president of Germany in 2012.

Read why the Berlin Wall rose—and how it fell.

For Wittenberg, after years of not knowing who had informed on him or how closely he was being watched, many of the answers were suddenly right in front of him. The six hours he spent with his file that day were filled with mixed emotions. At times, he couldn’t help laughing at the innocuous details in the file, such as the comments of his that were recorded completely out of context, or the time they reported on his English-language correspondence but wrote they were unable to evaluate it due to the language.

Reading other entries, “my hair stood on end,” he says. Understanding the sheer scope of the surveillance Wittenburg faced was hard to process: Those reporting on him included a union colleague, his boss, acquaintances at cultural organizations, and, most surprisingly, the partner of his wife’s best friend. Seeing the amount of information collected and the way it was gathered—he found proof the Stasi had searched his apartment—he began to understand how tenuous his situation had been and consider the impact on his family: “Just one more false move, and I would have been in prison.”

“For those involved in the democracy movement in 1989, there was no question that the files… should be preserved,” Gauck said at a recent ceremony commemorating the archive’s work. “It was more the question of how that should be done. We wanted to set in motion the political, legal, and historical process of reckoning with the dictatorship.”

During the past 30 years, some revelations in the 69 miles of files have led to arrests or resignations of top officials. Others are crucial for historical research about the era of the German Democratic Republic. On a more personal level, files have provided crucial information—and resolution—not only for Germans under Stasi surveillance but for their children and grandchildren as well.

See what life was like behind the Berlin Wall in 1961.

Typically, access to the files is restricted to individuals and close family members. Anyone interested in viewing a file must submit an application. After it’s confirmed that the file exists and the application is approved, which can take months, the person can sit down with them in Berlin or, in certain situations, in one of the archive’s satellite locations in the eastern states.

"People who have looked into the files the Stasi has put together on them have learned: How did the Stasi intervene in their lives? Who is responsible for the injustices they faced? Who delivered reports about them?” says Roland Jahn, the archive’s retiring director. “Everything that interests people in terms of their own fate."

The archive’s importance in helping people understand their lives is hard to overstate, says Stefan Trobisch-Lütge, a Berlin-based psychologist who founded a practice to help those suffering from the psychological effects of Stasi surveillance. Post-traumatic stress disorder, anxiety, depression, and an inability to trust are common among those he works with, he says.

For those still facing the repercussions of what they experienced, the Stasi files can be both a blessing and a curse. “For some it’s proof that, yes, that really all did happen—you need to take it seriously,” Trobisch-Lütge says. They see it as evidence that “these bad things happened to them. But for others, either because of the horrifying contents or simply the concept of having to work through the past again, the files bring massive feelings of angst.”

Filling in the gaps

In recent years, many new requests to view Stasi files have come from young people who want to fill in gaps in the stories of their parents or grandparents. German media often has emphasized negative aspects of East Germany at the expense of a nuanced consideration of people’s lives and memories from that time.

Tilmann Löser was just six when the Berlin Wall fell. Growing up in Leipzig, he had early childhood memories of life in the German Democratic Republic but sensed that discussing them was something of a taboo.

Reading his mother’s Stasi file was a way to discover things he’d wondered about when he was younger. It wasn’t so much that the file contained explosive revelations—it was relatively thin and mostly documented her research correspondence as a chemist with colleagues in West Germany, he says.

The file has facilitated conversations in the family about the past. “In the early 1990s, I think my parents were a little bit more frightened to talk about it,” Löser says. “But now that they’re retired,” he adds, “this is a good moment of getting in touch again and talking.” The Stasi file—and the fact that his daughter is now the same age he was when the wall fell—has helped bring about a new willingness to talk about those days.

Jahn emphasizes that the changed status of the Stasi archive doesn’t mean that the work of reckoning with East Germany’s past is over.

“Exactly the opposite,” he says. One benefit of moving the files to the National Archives is that they’ll be digitized, better preserved, and eventually available in archival locations across Germany. These measures will ensure the files themselves continue to play a pivotal role in research for generations to come: “We’re building structures that are sustainable for the future,” Jahn says.

To underscore its commitment to understanding and helping resolve the harmful legacy of East German rule, the government has named Evelyn Zupke, a former member of the East German opposition movement, as the Federal Commissioner for Victims of the SED Dictatorship.

With a federal election this September, and with the far-right Alternative for Germany party entrenched in eastern Germany, the region will remain a topic of debate in the German political sphere.

“There’s still a lot to do,” Jahn says. “It’s important that the changes, and the new position, send a signal that there was a dictatorship that still needs to be dealt with—but also that we move away from the fixation on the Stasi and make it clear it’s always about doing right by the victims.”